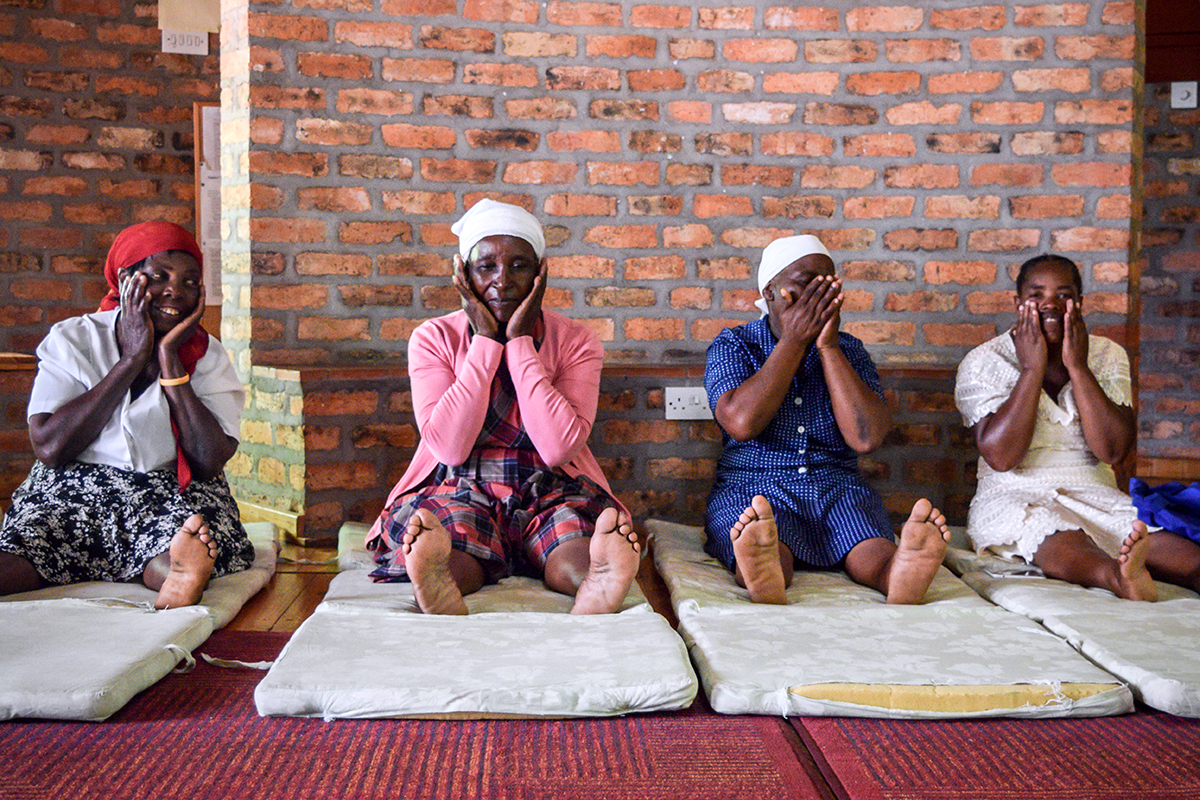 HARARE, ZIMBABWE — Elizabeth Zhuwaki sits outside a Buddhist temple in the shade, occasionally leaning forward to allow the warmth to brush her body. She and a few other women have just completed a four-hour Tara Rokpa therapy session and are conversing over tea.

“When I leave this place to go home, I picture myself with my grandchild who passed away, and my mind is put at ease,” says Zhuwaki, 75, explaining how taking part in the therapy helps her cope with her loss.

Zhuwaki’s late grandchild had a disability, something Zhuwaki has in common with the other women. They too have children with disabilities. Each of them attests to having struggled with discrimination in their communities as a result. Some were merely laughed at. Others were blamed. They were told that the disability was their fault because they gave birth at an advanced age and that they should have known better.

“A lot of it is ignorance,” says 49-year-old Virginia Chiringa. She and the other women know this. But it still hurts. “Insults affect the child and they also affect the parents. I used to cry a lot, but now I am strong.”

I look back at the good memories and misfortunes in my life and reflect on each event to make peace with it.Cecilia Binda, 48, a participant in Tara Rokpa therapy

The women say they gain strength from Tara Rokpa, a form of psychotherapy developed by Lama Akong Tulku Rinpoche, a Buddhist monk and doctor of traditional Tibetan medicine who died in 2013. His teachings combine Eastern and Western psychotherapy techniques, and has relaxation and compassion at its core, according to Tara Rokpa therapist Jayne Pilossof.

The women were referred to the program at the Rokpa Support Network in Harare by the Zimbabwe Parents of Handicapped Children Association. They visit the temple once a month to take part in the free session.

Pilossof, who conducts the sessions, encourages participants to live fully in the moment, but to do so in a relaxed and intentional way. The sessions involve visualizations, massage and encouraging the participants to treat themselves and others with respect and kindness.

“A person learns how to ‘re-relax,’” Pilossof says. “Akong Rinpoche, who came up with the process, felt that we had forgotten how to relax.”

The Tara Rokpa therapeutic process proceeds in stages, which aid self-healing and in developing a calm state of mind, she says. These include “Back to Beginnings,” a technique which helps participants explore their past. 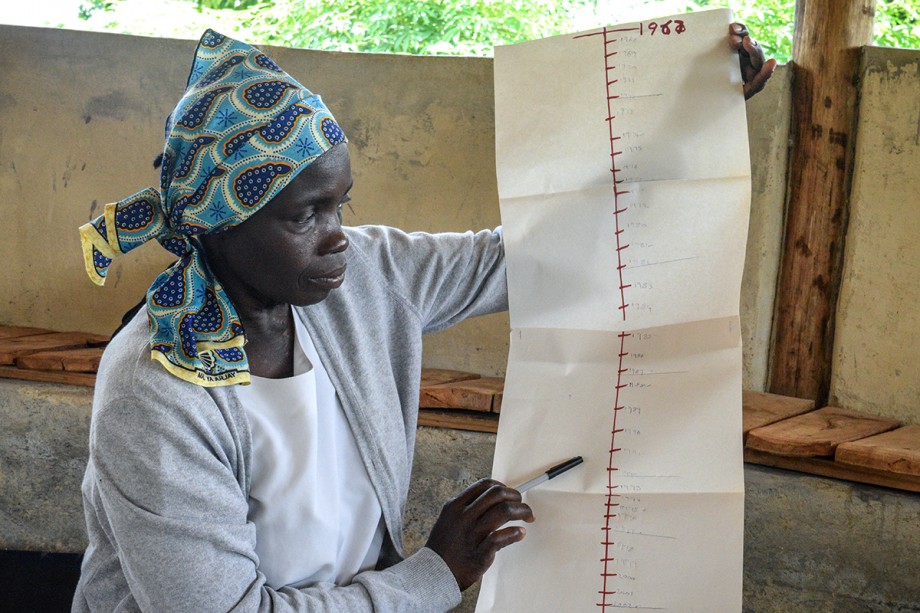 Cecilia Binda, 48, shows her life timeline chart that she made during a Tara Rokpa Therapy exercise known as “Back to Beginnings” at the Rokpa Support Network in Chitungwiza, Zimbabwe.

Pilossof says that according to the feedback she has received from participants, the therapy has helped them cope with various life challenges. “Blue Light,” a visualization exercise aimed at healing anxieties and increasing confidence, proved especially popular with the women, she says.

“Visualizing a blue light helps us enter a frame of mind in which we learn to accept our situation as it is,” says participant Lilian Mazire, 70.

For Mazire, acceptance is this: “I have a 20-year-old child with Down syndrome and I stand by my child.”

Harare is home to two Tara Rokpa therapy centers, where people from different faiths participate. Women who attend Tara Rokpa therapy at the Buddhist center in Chitungwiza — a high-density suburb near Harare — seek the therapy because they have illnesses such as AIDS. They say the “Back to Beginnings” sessions have been beneficial.

“I look back at the good memories and misfortunes in my life and reflect on each event to make peace with it,” says Cecilia Binda, 48.

Because the therapy is rooted in Buddhism and more than 90 percent of Zimbabweans identify with Christian denominations, some find it controversial.

“As long as the source [of healing] is not Jesus Christ, it’s wrong,” says the Rev. Rumbidzayi Kamba of the Apostolic Faith Mission Church in Harare.

Others believe that Buddhist practices are helpful to all and can be adopted in parallel with other faiths.

“People go through the world without much awareness; mindfulness meditation is just becoming more aware,” says Martin Steward, a multi-faith theologian and yoga practitioner. “People are at their innermost core when they are awakened. It’s a waking up to who they really are.”

For the participants, Tara Rokpa is less about religion than it is about healing. Tsitsi Chirenje, 46, is a member of the Methodist church, and she says the Buddhist therapy has helped her.

“When I massage my hands, the pain reduces,” she says. “When life gets overwhelming, I pace myself to avoid overthinking.” 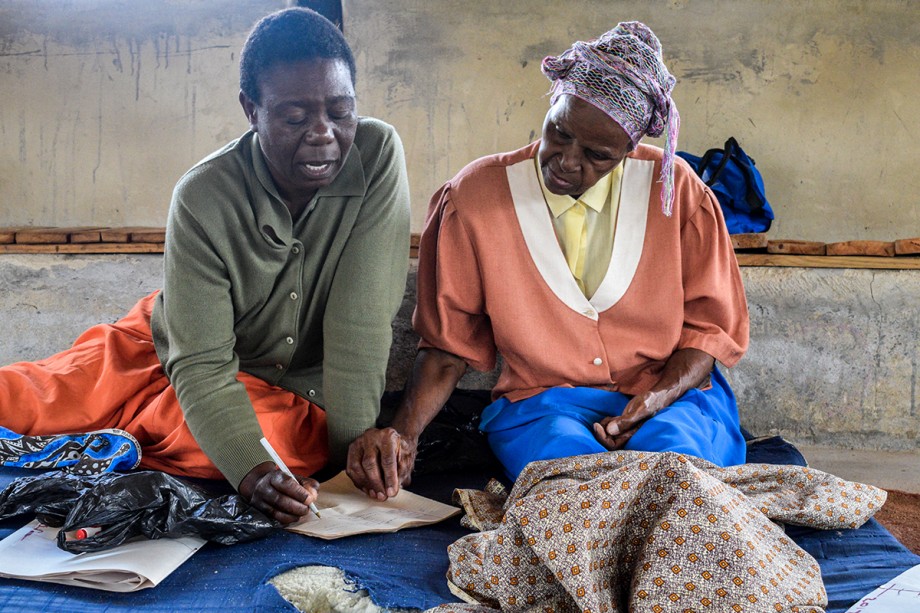