Skip to main content
The story you are reading was published on Monday January 4, 2016. To read more recent stories click here. 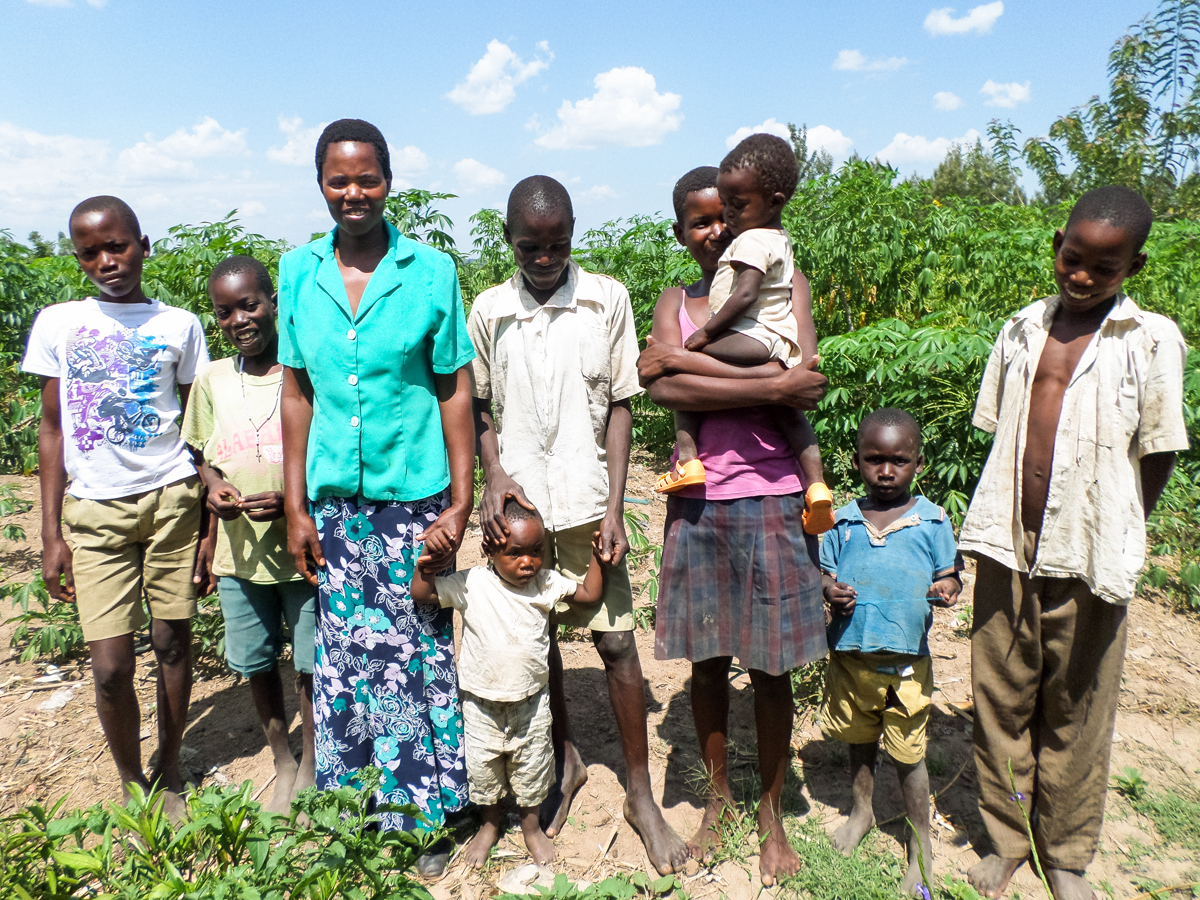 TORORO, UGANDA – When Florence Abbo’s husband died five years ago, it gave the mother of six an escape.  She married when she was 14 years old, and abuse began shortly after the wedding, she says.

“Five days after I gave birth to our first child, he gave me a hoe and asked me to go dig the garden,” she says. “When I refused, he beat me up.”

When he beat her, Abbo says, he told her he was beating his father’s cows. Abbo’s father-in-law had given her father a cow, and cash equivalent to a second cow, as a dowry. When Abbo fled to her parents’ home, her husband followed her, a rope in hand, demanding his father’s cows back.

“My father would tell me to go back to my husband and endure in my marriage because he did not have cows to refund,” Abbo says.

Husbands and their families have long claimed a customary right to demand the return of a dowry when a marriage ended.  That custom forced women to remain in abusive marriages if their families couldn’t afford to repay the bride price, activists say. But in August, Uganda’s Supreme Court ruled that it is unconstitutional to demand a bride price refund when a marriage falls apart.

The ruling came after eight years of lobbying by MIFUMI, a Tororo-based non-profit organization that works to protect women and children from violence. MIFUMI and others first filed a petition at Uganda’s Constitutional Court in 2007, challenging the demand for payment and refund of bride-price. The case was ultimately pushed to the Supreme Court, the highest court in Uganda. Abbo’s story was presented as evidence.

“We did not give up because we knew that were on the right track,” says Evelyn Schiller, the director of information and communication at MIFUMI. 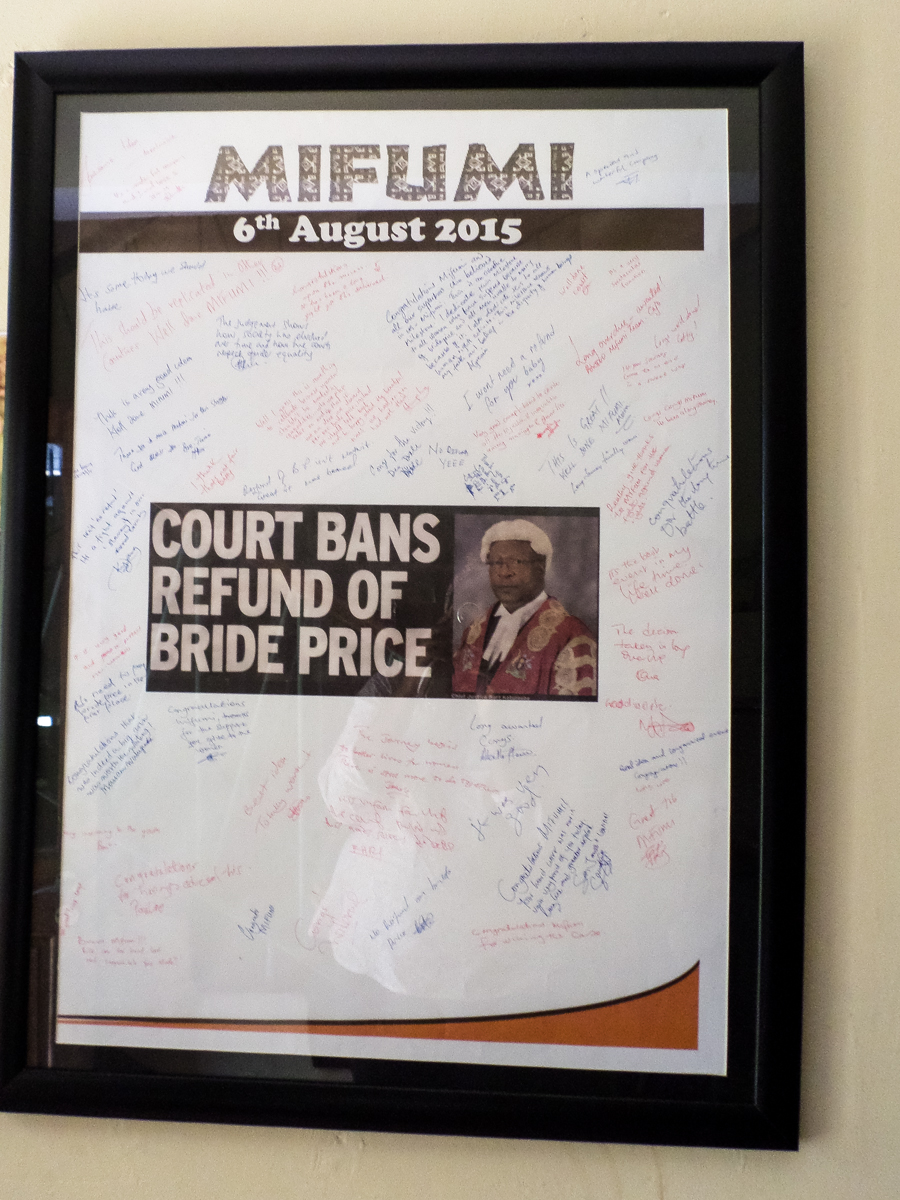 Schiller says the ruling is a beginning of change for all women in Africa, not just Uganda.

“We have opened space for all actors to come together and work together so that we leave this exploitative culture behind,” she says.

But some women oppose the change. Rose Apio, a 70-year-old woman, says long-held practices regarding dowries are valued traditions.

“This is our culture,” Apio says. “A man pays bride price, when the marriage ends, the woman brings back the cows. There is no need to change that.”

Paying a bride price is a common practice among some traditional Ugandan communities, although items exchanged vary. Cattle-herding communities like the Karimajong base dowries on animals: cows, goats and chickens. Agricultural groups like the Baganda pay dowries in the form of food and clothing. The amount of bride price paid also varies from clan to clan and family to family depending on one’s economic status.

Most communities in Uganda also practice the custom of refunding bride price at the dissolution of a customary marriage. In some districts, local authorities banned this practice years ago. Tororo District council, for example repealed a by-law on bride price in 2008 and passed the Bridal Gifts Ordinance which states that bride price is a non-refundable gift. Butaleja District council passed a similar law last year and additionally banned families from demanding a dowry before a woman’s burial. If a man and woman live together before marriage and the woman dies, some families demand that a bride price be paid before she is buried.

Dowries are serious business in Uganda.

Dowries are often detailed in advance along with other wedding plans. Plans for one 2015 wedding in Uganda’s Manafwa District included a full list of dowry items alongside wedding needs including a cake, photography and other expenses.

The dowry items include the following:

Source: The families involved in this wedding granted GPJ the right to publish these details.

Women in districts where bride-price refunds have been banned say the change allowed them to leave abusive relationships.

Lucy Akello, a mother of two who lives in Tororo District, says she was happily married for five years, until her husband lost his job and started drinking. (Akello is not affiliated with MIFUMI.)

“He became a different man,” Akello says. “He would come home late and drunk and we would end up fighting. After some time, I had enough of him and left with my children.”

Akello’s husband followed her to her parents’ home and demanded a dowry refund.

“Thank goodness, the district council had passed the ordinance so there was nothing much he could do,” Akello says. “The custom of refunding bride price has been like a noose hanging over women’s heads.”

Other women champion the dowry refund as a safeguard against divorce.

“Women might misbehave because they know when things go wrong, they can easily divorce their husbands and marry other men,” says Rita Amuge, a trader in Tororo. “You know, people work hard to stay in their relationships if they know they cannot afford to refund the cows.”

MIFUMI encountered stiff opposition when it tried to garner support from the public, says Athanasius Oguti, the national campaigns coordinator.

“We had conflicts with traditional institutions as well because they felt that we were fighting culture, until towards the end when they started to understand,” Oguti says.

In court, the attorney general’s office argued that it is the right of every Ugandan to practice his or her culture.

This is our culture. A man pays bride price, when the marriage ends, the woman brings back the cows. There is no need to change that. Rose Apio, 70, who supports dowry refunds

Changing the bride price culture took long because it is a tradition deeply engrained in Ugandans’ culture, Schiller says.

“It is very difficult to change societal thinking,” says Schiller. “We look at bride price as a cherished custom and then we give it a helmet and a bulletproof coat that is going to protect it from everything.”

MIFUMI plans to translate the ruling into local languages, Oguti says. The group will also work with faith-based organizations to help them understand that the ruling will strengthen marriages, not weaken them, Oguti says.

Women rights activists say the ruling has opened a new chapter for women.

“The ruling is a big milestone which has broken the padlock which has kept women in loveless relationships,” says Elizabeth Ampairwe, a project coordinator for Eastern African Sub-regional Support Initiative for the Advancement of Women, a regional civil society organization. “It has opened doors for women to make decisions about their health, and life. I am sure that women will be treated better in our communities.”

For Sophie Alal, director of Deyu African, an organization dedicated to promoting and preserving culture, the ruling was a long-overdue call to examine an aspect of traditional culture that she called “troubling.”

“Bride price is a beautiful tradition when negotiated progressively for it binds families in a spirit of mutual appreciation,” she says. “However when people see young women as opportunities to access significant material wealth, it makes the institution of marriage appear to be a market place for predatory acquisition.”