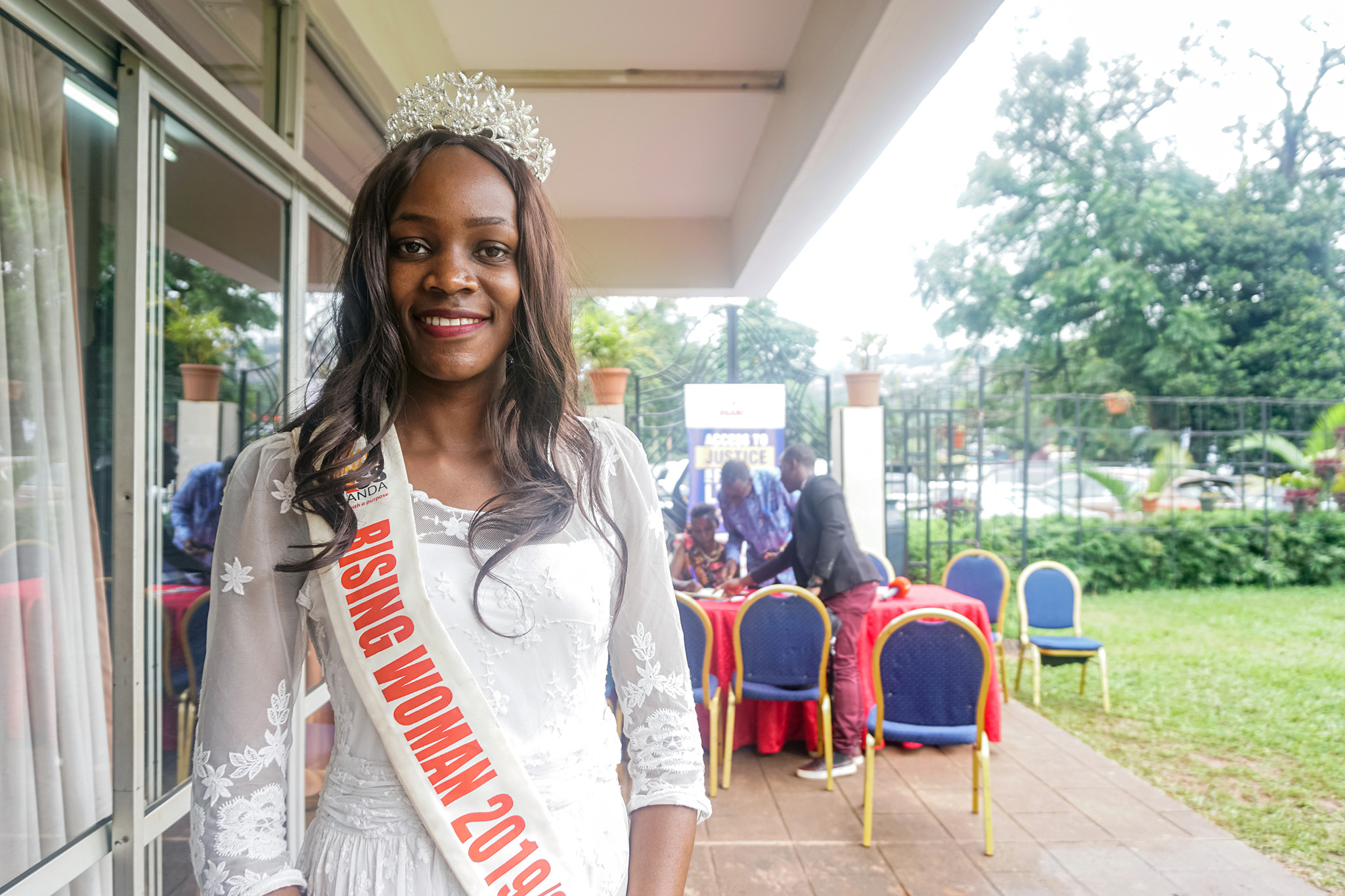 KAMPALA, UGANDA – Gloria Nawanyaga was in boarding school in 2007 when she decided to stop taking the medication she needed to stay alive.

Nawanyaga, 11 years old at the time, had been diagnosed with HIV. Regular antiretroviral treatment allowed her to continue with her normal life and education. But eventually, she feared that other students would learn of her condition.

“I used to fear my fellow students asking me why I am taking drugs. I resolved not to take the drugs,” she says.

For Nawanyaga, it didn’t make sense to try and ask for advice from teachers or school administrators. There were no programs to help to students facing her challenge.

“They don’t respect confidentiality. There was no support,” Nawanyaga says.

Today, Nawanyaga is a 23-year-old law student at Uganda Christian University. She was also named Miss Rising Woman at the 2019/20 Miss Uganda pageant and the former Miss Young Positive at the 2017/18 Y Plus Beauty Pageant. She says she was inspired to compete because of the stigma and discrimination she endured.

Uganda has received international acclaim for its efforts to combat the spread of HIV. The country’s rate of infection has dropped from an estimated 10% of adults aged 15 to 49 in the early 1990s to 5.7% in 2018, according to figures from the Joint United Nations Programme on HIV/AIDS (UNAIDS). In 2018, UNAIDS reported 1.4 million Ugandans were living with HIV/AIDS. An estimated 53,000 new HIV infections and 23,000 AIDS-related deaths were recorded in the same year, continuing a downward trend.

An estimated 100,000 Ugandan children, from infants to 14-year-olds, were living with HIV in 2018, according to UNAIDS figures. That same year, the Ugandan government decided to address the challenges of children living with HIV, after receiving increasing reports of the struggles they endure.

A 2018 study published in BMC Public Health, a peer-reviewed public health journal, cited lack of privacy in schools and poverty as two of the leading reasons for poor antiretroviral therapy adherence among young HIV-positive students in Uganda. Like Nawanyaga, some are so afraid of stigma that they either find hidden locations to take their medications or delay their regimens, which affects their immunity to the virus and other life-threatening conditions.

In recent years, demonstrations by activists and students led to the development of the current policy, following an attempt to initiate one that was shelved in 2001. Expected to be in place beginning June 2020, the policy states that school settings should be favorable for people living with long-term illnesses such as HIV. The sick bays in boarding schools should hire qualified personnel and be well-equipped. In case of emergency critical situations, schools should refer students to nearby hospitals that can provide care. The policy also states that confidentiality of children living with HIV is paramount and should be observed.

Aggrey Kibenge, undersecretary for the Ministry of Education and Sports, says the revised school health policy will expand the role of the education sector’s existing HIV policy, which only focuses on the safety and treatment of employees.

“The new school health policy will ensure that sick bays in schools are more functional and can meet health requirements of children,” he says.

Ruth Awori, the policy and advocacy officer at the Uganda Network of Young People Living with HIV/AIDS (UNYPA), says that lack of privacy in schools is a big problem for students.

Many school-based health workers aren’t qualified to support youths living with HIV, or to help them find private places to take their medication, Awori says. When the students disclose their HIV status to the school nurses or matrons, those staffers sometimes reveal it to other people, which increases the stigma.

Because there have been no uniform guidelines for school HIV policy in Uganda, students, teachers and nurses who discriminate against youths with HIV are not held liable, Awori says.

However, some school administrators have developed support strategies for students living with HIV.

Jude Mugambe, the headmaster of St. Angella Nursery and Primary School, says his staffers tell parents to put their children’s medications in the school sick bay so students can stop by whenever it’s time for a dose. He says the sick bay environment is like a rest room, which makes it less conspicuous.

“Many children go there to treat different ailments, so it may be hard to notice someone always going to the sick bay to take drugs every day,” he says.

As government officials finalize their support policy, Nawanyaga, the former Miss Young Positive, says she plans to start a campaign in schools that will help young people living with HIV/AIDS get scholarships and access to education. That’s another type of support that this group may need more than others.

“Most children who are living with HIV have lost parents. Myself, I lost a father and have one parent, my mother who is struggling to pay my tuition,” Nawanyaga says. “Most young people living with HIV need to be empowered to contribute to development.”