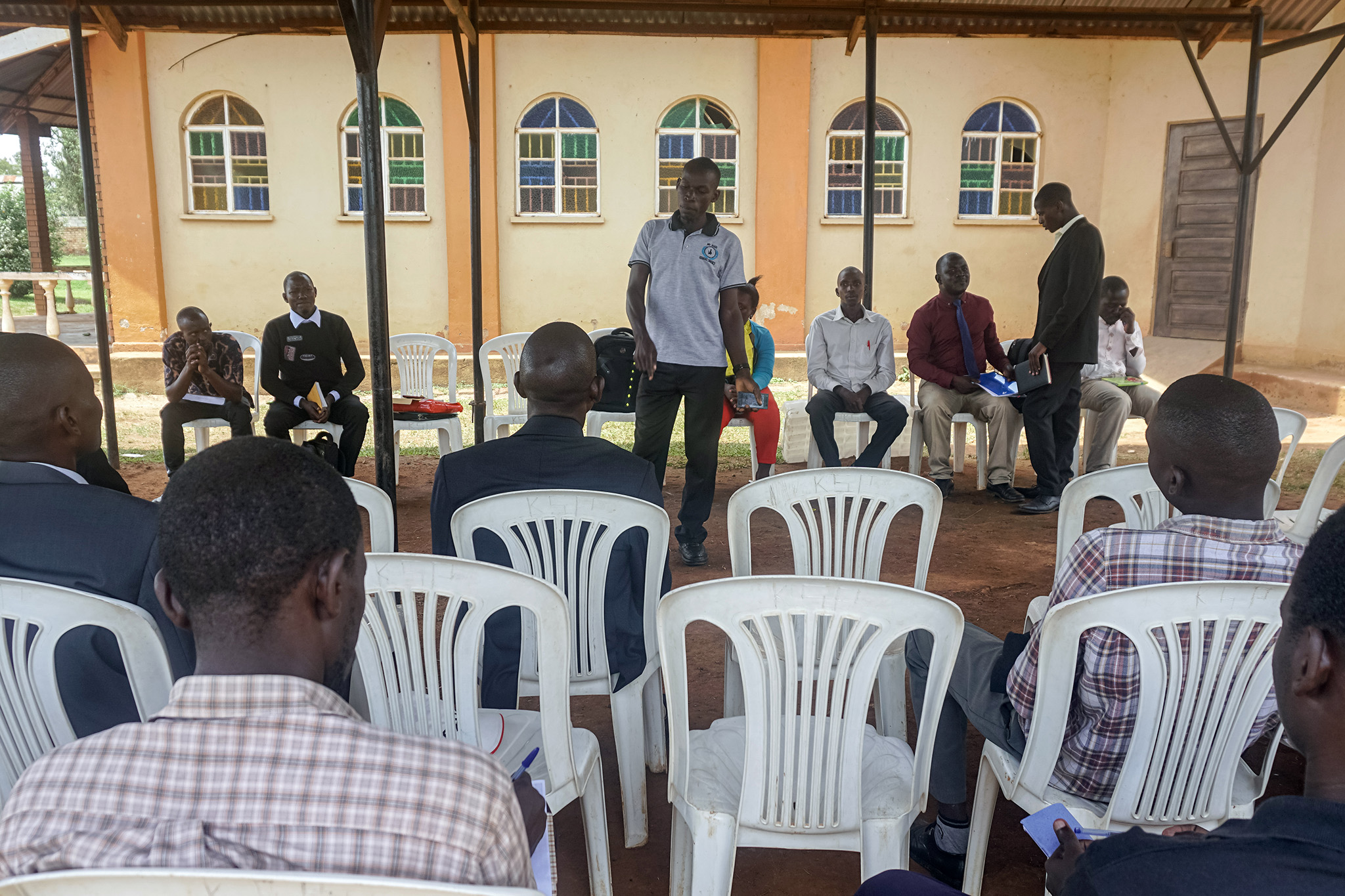 ASGO is a group of economists and agriculturalists who launched an initiative in July 2019 to collect urine from Ugandans in hopes of reversing soil infertility in much of the nation.

Barigye says the group has spent 18 years preparing for the launch. They trained 700 scientists and, more recently, the thousands of people who now provide urine.

ASGO operates collection programs in 78 districts and has a stake in 7,000 acres of land, Barigye says.

Much of Uganda’s land has become infertile from overuse and lack of fertilizer, he says. So ASGO is working to build fertility by using urine fertilizer to grow food for humans – and control disease, address food scarcity and provide economic welfare to Ugandans in the process.

Ultimately, the organic fertilizer will be used in gardens, Barigye says, standing outside a urine storage facility in Wakiso.

ASGO started training participants two years ago and now has 9,800 people registered to provide urine. Participants must take a weeklong training that costs 300,000 shillings ($81). Medical examinations aren’t required, nor are there limits on the amount of urine they can sell. Once certified, members receive 32,000 Ugandan shillings ($8.67) per liter of urine. They’re paid with Visa cards a week after their donation.

The group collects about 20,000 liters of urine every month, and about 130,000 liters are now in storage. The group needs about 200,000 liters before they can initiate industrial processing. Barigye expects to begin that process before the end of summer 2020.

Land infertility plagues Uganda, where the economy depends on agriculture. The agricultural sector employs about 70 percent of the labor force, and accounts for more than half of all exports and a quarter of the country’s GDP, according to a 2018 World Bank Group report.

Human urine is nutrient-rich, free and available but underutilized as a fertilizer, though multiple studies in Uganda and elsewhere have shown that human urine-based fertilizers improve soil fertility and crop yields.

“I learned that urine is a fertilizer,” says Mercy Kisubizo, 23, who joined ASGO two years ago and began learning soil science.

She has received payment for her contributions, but she adds that she had to pay 12,000 shillings ($3.25) to buy a special jerry can from ASBO that has a preservative for the urine.

Prossy Akullo, another ASGO member, attended training and has been selling urine since the group started collecting it in 2018.

“We were taught, graduated and given certificates,” Akullo says. “In a week, I give them three to four liters.”

Despite nearing its goal of 200,000 liters, Barigye says the project has faced some hurdles.

Urine is perceived as dirty, Barigye says. As a result, many Ugandans remain skeptical of selling their urine. Some are afraid to donate because they think they will be bewitched.

“Others think it’s a cult,” Barigye says. “When you talk of selling urine, people think you are mad. Even educated people don’t understand it.”

Jackeline Mutumba, a subsistence farmer in Uganda’s Wakiso district, says she would never donate urine and doesn’t believe it would improve crop yields.

“Urine is something very personal,” she says. “Those selling their urine should know that it can be used to bewitch them.”

ASGO will keep advocating for unique solutions, Barigye says. The organization is continuing to attract donors and appeal to government entities – even longtime president Yoweri Museveni.

“We need the president on board,” Barigye says.

Once industrial production begins, he says ASGO will use the fertilizer to produce beans, groundnuts, potatoes and bananas, among others fruits and vegetables. Food makes up a significant portion of household budgets. Barigye hopes to give part of the harvest to ASGO members for free.