Skip to main content
The story you are reading was published on Friday June 16, 2017. To read more recent stories click here. 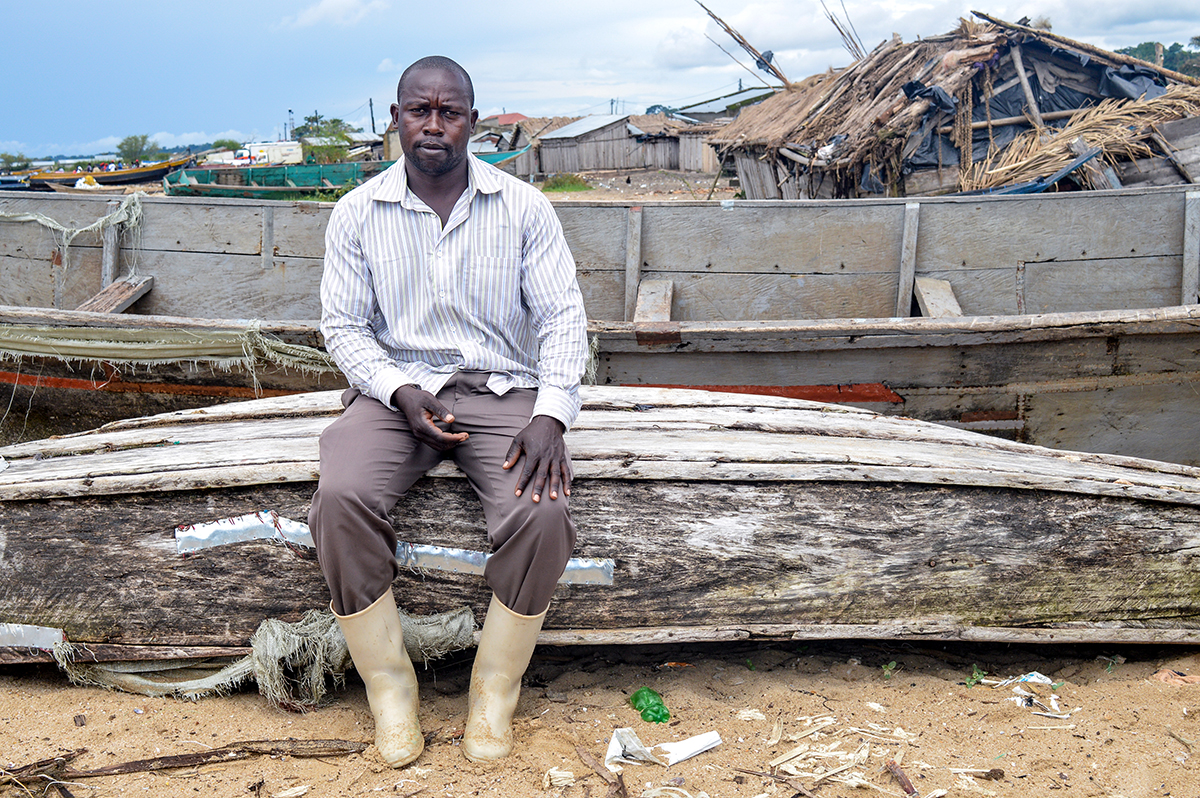 MASAKA, UGANDA — As the smell of fish guts permeates the mid-morning air, Sande Mweyambi laments that both the size and quantity of fish he sells to restaurants and other traders has dwindled.

Mweyambi, who’s been fishing at the Namirembe fish landing site and other Lake Victoria sites for 14 years, attributes the depletion to poor fishing methods, including nets with holes so small that they catch young fish smaller than permitted for capture under fishing regulations.

“We are supposed to use at least a five-and-a-half inch net that catches mature Nile tilapia but some use nets of 2.5, 3 or 4 inches and these catch small immature fish,” he says.

Fish stocks in the Ugandan waters of Lake Victoria, the largest inland fishery in the world, are declining. Nile perch catches declined by 46 percent from 2011 to 2015 while tilapia catches were lower by 38 percent during the same period, according to Uganda’s National Fisheries Resources Research Institute’s fisheries catch assessment survey.

However catches of smaller fish species like Haplochromis, Protopterus, Synodontis, Clarias, Bagrus increased by 112 percent from 2014 to 2015, according to the survey. 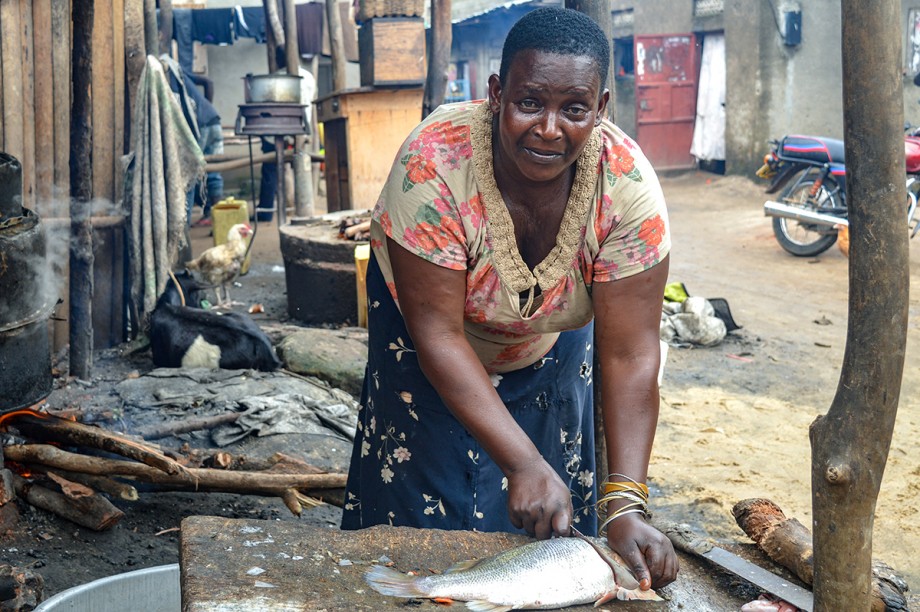 Hadijja Namuddu buys and cooks fish for her customers at the Namirembe fish landing site on Lake Victoria in Uganda. “These days the fish is smaller in size due to overfishing,” she says.

Uganda’s National Fisheries Resources Research Institute placed some of the blame for the decline on fishing gear that doesn’t meet required standards, including use of beach seines, monofilament gill nets, cast nets and basket traps.

“The continued use of these illegal gears to harvest the target species especially the Nile perch and tilapia is unsustainable for these fisheries and could be the main cause for the observed large declines in the two fisheries on the lake,” its report on the survey says.

Many unemployed persons also have joined fishing as a source of livelihood.

“People are many and jobless, so they have come to join fishing,” says Robin Bukenya, an official with the Lake Victoria Environmental Management Project (LAVEMP), a World Bank initiative that fights overfishing and other environmental challenges together with the five nations in the lake’s drainage basin – Burundi, Kenya, Rwanda, Tanzania and Uganda.

“They overfish, use illegal nets that break the laws and get small fish so they can’t grow,” he says, noting that he also blames weak laws and political interference for depletion of fish in Lake Victoria.

“The technical people try to improve fishing and the politicians challenge them bringing us problems. Even when they get those with immature fish and convict them, they can only pay 90,000 shillings [about $25] and be free again because of weak laws,” Bukenya says.

Uganda’s Ministry of Agriculture Animal Industries and Fisheries is partnering with development partners and Uganda’s army, the People’s Defence Forces, to enforce fishing regulations. But some say this is not enough to dissuade violators as some enforcement officers are corruptible and fishing regulations are weak.

“People with immature fish are caught as they transport it and are intercepted,” he says.

“Government should stop illegal nets from coming into the country,” he says. “They should pay those who trap bad fishing so that they aren’t corrupted.” 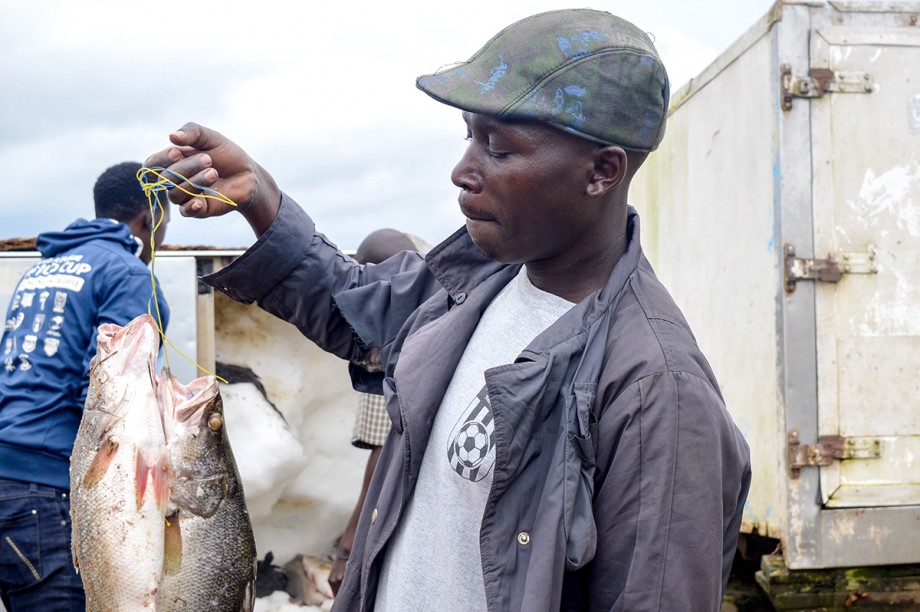 Fisherman Mweyambi agrees with Ntumwa that fishing nets that don’t fulfill legal requirements should not be allowed into Uganda.

“Stop these bad nets from coming into Uganda to avoid all this bad fishing,” he says.

“It is true we are registering a decline in big fish species,” he says, noting that small fish species are increasing.

The ministry is partnering with fishing communities, development partners and other government departments to stop overfishing. Steps include amending the nation’s fish policy and banning the import of nets, Rukuunya says.

“We are working with government agencies [and] some associations in fisheries to enforce compliance on all water bodies and trade routes,” Rukuunya says.

Brian Mukasa, who transports fish for a living, is afraid that reduced fish stocks will culminate in a loss of livelihood for him and others who are part of fishing communities around Lake Victoria.

“I used to transport a lot of fish every day but now the amount has reduced,” he says. “I worry that I may lose my job.”