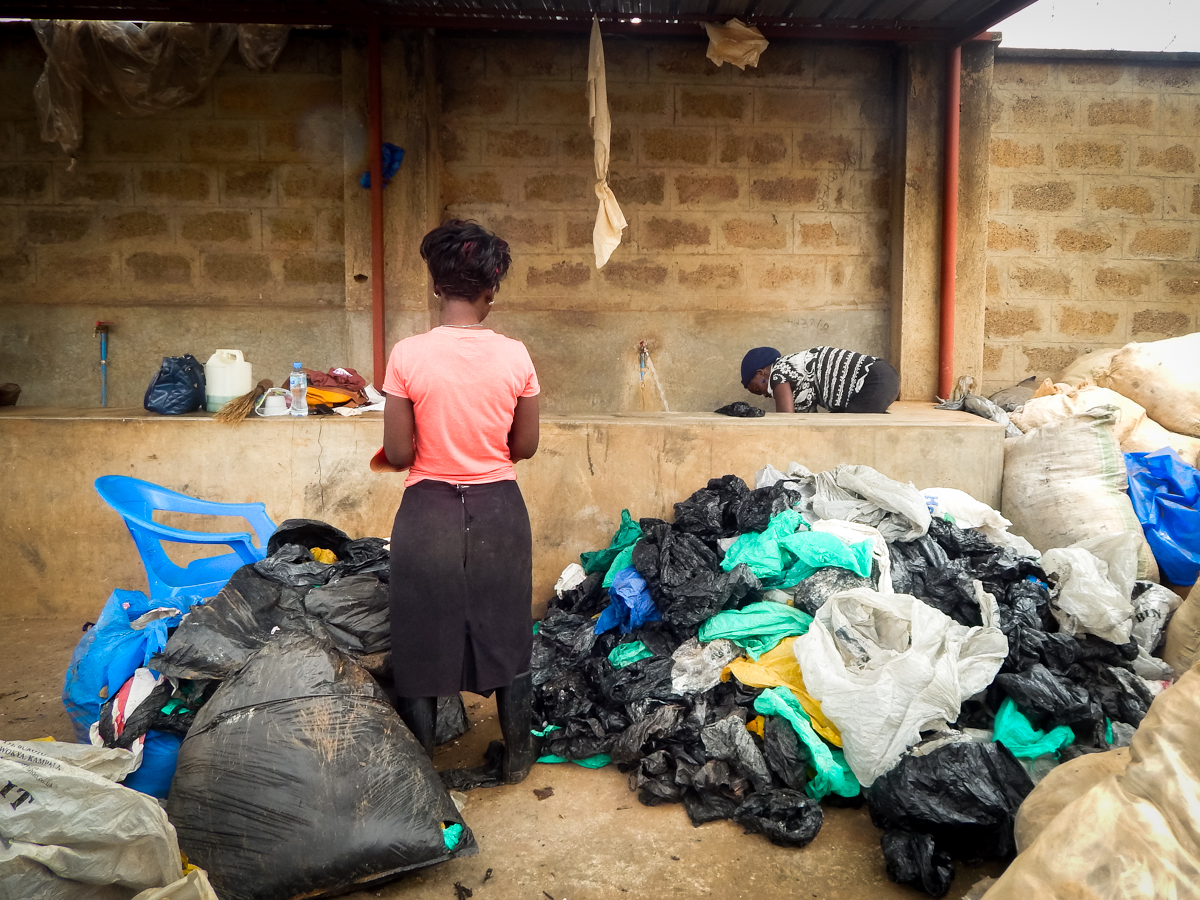 KAMPALA, UGANDA – Joseph Mukisa, a trader at Usafi Market in Uganda’s capital city, moves from one stall to another hawking plastic bags.

Just a few months ago, the thin plastic bags were a normal part of buying and selling at the market. Now, the bags are still ubiquitous, but they’re also illegal.

Following the lead of Rwanda and other African nations, Uganda’s lawmakers in 2009 made it illegal to use, sell, manufacture or import plastic bags. The law was expected to take effect in 2010, but it was never enforced as the government instead worked to implement a recycling program in partnership with bag manufacturers.

In April the National Environment Management Authority began enforcing the ban saying recycling efforts weren’t sufficient. NEMA has since been confiscating the bags in supermarkets and closing factory divisions that manufactured them. Twenty factories have closed their plastic-bag divisions since April. There were 47 manufacturers in Uganda before the ban was enforced. Most continue to produce agriculture bags or other bags not prohibited by the law.

NEMA’s Twitter account regularly features photographs taken during raids in which bags are confiscated. A tweet dated Sept. 17 lists the names of the towns where an enforcement team went to work to seize three tonnes (6 pounds) of bags. In another tweet, dated Sept. 8, Ntake Bakery is named as a ban violator, and a photo shows a bakery official signing an administrative penalty notice. 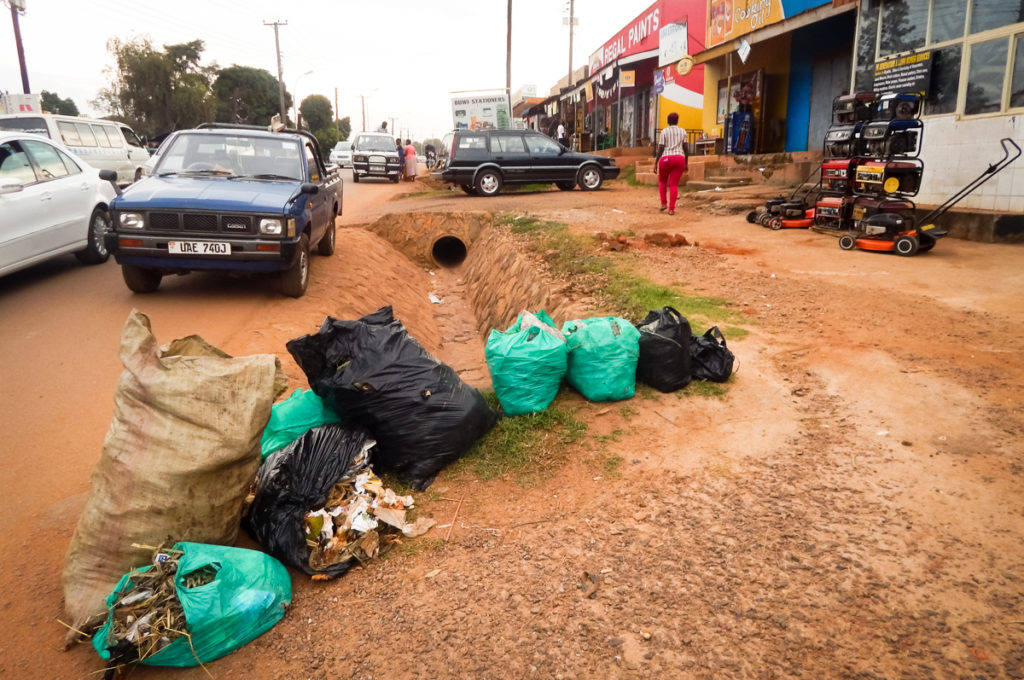 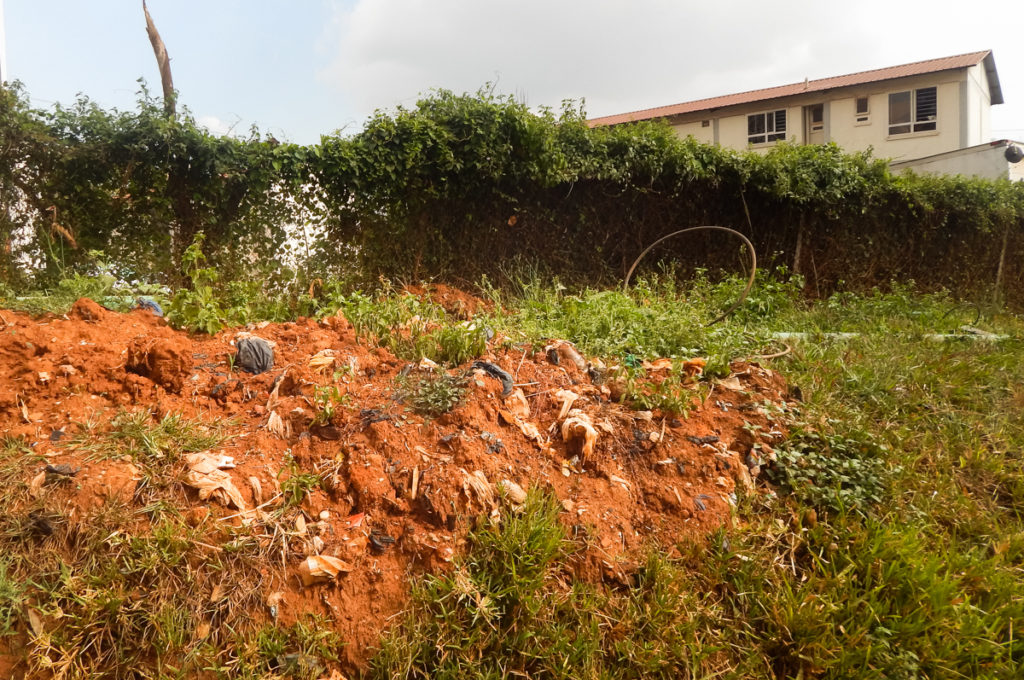 Plastic bags choke the soil in Bukoto, a Kampala suburb. The National Environment Management Authority (NEMA) began enforcing a ban on the sale and use of plastic bags in April, but the bags are still in use. 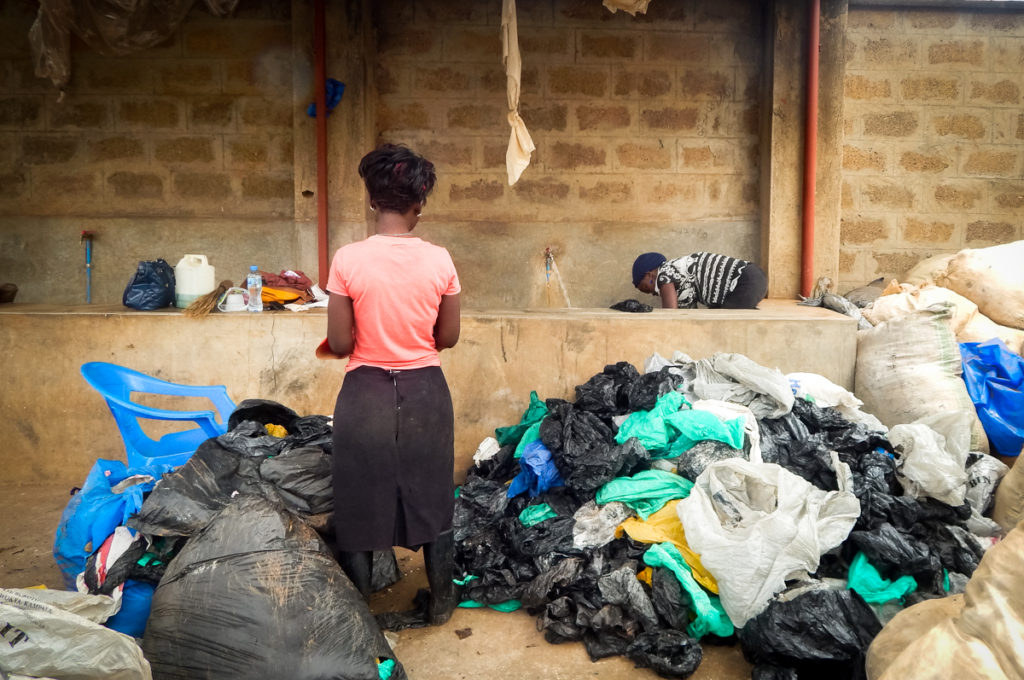 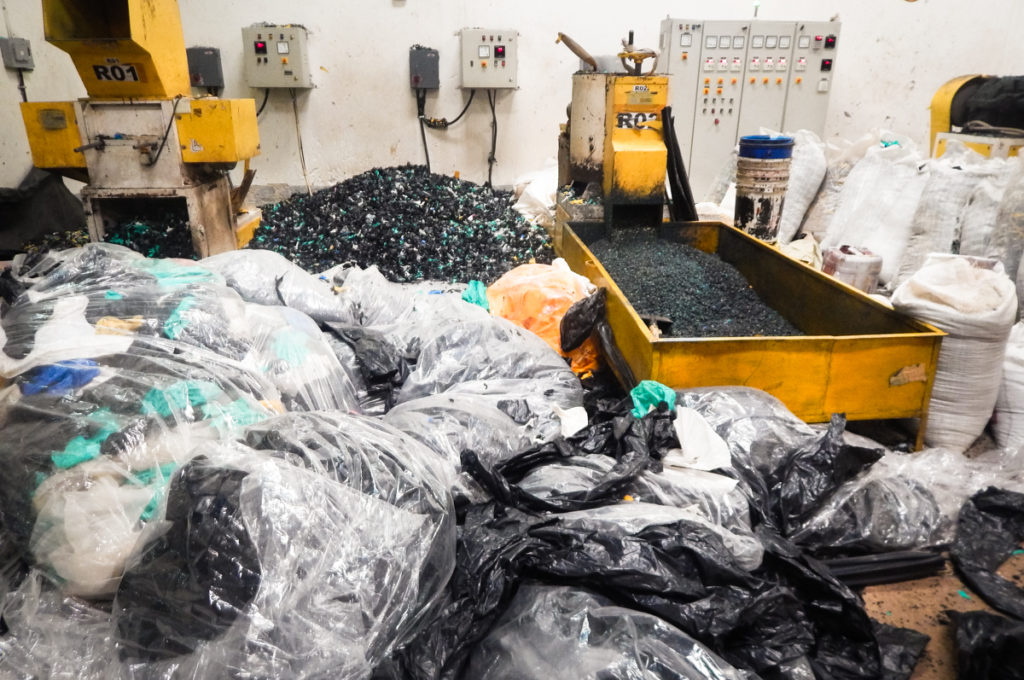 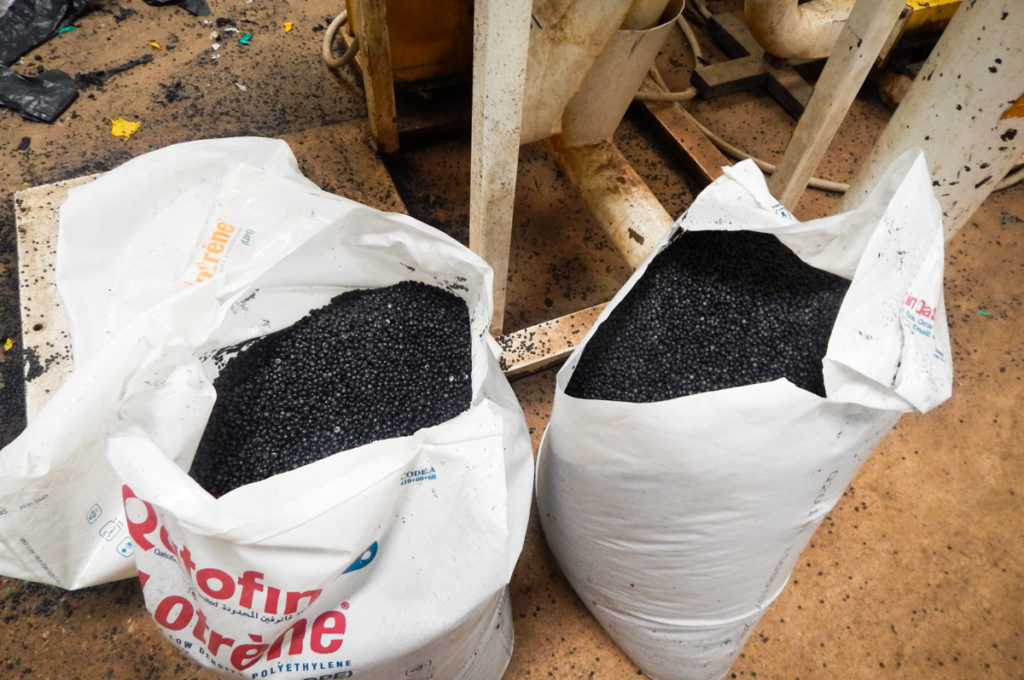 The final product after the recycling at Nile Plastic Industries Limited in Kampala. This product is used to make agriculture bags and garbage bags, which are not prohibited.

The surprise enforcement of the ban has revealed a nation divided: Many Ugandans celebrate what they see as a chance to have a cleaner environment. Others openly buy contraband bags from hawkers, like Mukisa.

And plastic bag manufacturers say the government didn’t live up to its promise to let them recycle bags to meet environmental standards, instead of shutting down their operations.

Plastic bags take a toll on the environment and the budget of Uganda. About 38,600 tons of plastic bags go into Uganda’s environment annually, and they take about 400 years to decompose, says Naomi Karekaho, public-relations officer for NEMA. The government spends 10 billion shillings ($2.7 million) in Kampala alone to unclog drainages blocked by polythene, she says.

There is confusion over whether the ban covers all plastic bags or only plastic bags under 30 microns. The 2009 law, which a NEMA official told Global Press Journal they are enforcing, does not mention a specific micron level. However, local news reports say the ban is only on plastic bags 30 microns and under. The NEMA Twitter account has posts that say it is a total ban and that seem to indicate the ban is at the 30 micron level. A 2012 report from the Committee on Natural Resources says 2010 regulations “almost exempted all the plastic/polythene bags.”

Uganda is one of more than 20 African countries to ban plastic bags, to varying success. Rwanda imposed a ban in 2004, and that ban still stands. Kenya’s first ban, imposed in 2007, failed, and a second one, banning certain thin bags, went into effect in 2011. Enforcement of bans vary widely on the continent, and in some countries, bans aren’t enforced at all.

Uganda is one of more than 20 African countries to ban plastic bags, to varying success.

Early plans to enforce Uganda’s ban were delayed when plastic-bag manufacturers negotiated a deal that would allow them to continue to produce plastic bags, provided they institute a recycling program for them, says Musa Mugeere, general manager of Luuka Plastics, a manufacturing plant in Kampala.

The manufacturers invested in recycling plants and have been collecting used plastic bags from all over the country and recycling them, Mugeere says.

Those agreements were not written down, says Bob Ambrose Nuwagira, senior information education and communications officer at NEMA, and manufacturers didn’t meet their end of the bargain. Of the 957 metric tons of plastics bags produced, only 6.5 metric tons, or 0.7 percent, were recycled, Nuwagira says. He denied requests to provide hard copies of the data to Global Press Journal, saying it is part of a confidential document.

Lawrence Kaggwa Lugwana, chairman of the Uganda Plastic Manufacturers and Recyclers Association, says manufacturers have done everything the government asked them to do to continue producing plastic bags.

​“We were asked to buy recycling plants, and we have done so,” he says. “They talk about a certain thickness, and we abided by those recommendations. They recommended publicity and collections from the environment, and we have done that also. What have we not done?​”

“They have not come to the ground to find out what is happening,” he says. “We don’t even get enough plastics to recycle now.”

For farmers, plastic-bag waste management is a matter of life and death in Uganda. Plastic bags make farmlands unproductive and kill livestock when swallowed, depriving people of their livelihood. Naomi Karekaho, public-relations officer for NEMA

Mugeere says NEMA’s decision resulted in losses for manufacturers that invested in recycling plants, which are now useless. He could not provide specifics of how much had been invested to date.

Supermarket managers say the ban has caused financial losses, but they support the ban to protect the environment.

Rashid Ayesiga, supply-chain manager at Tuskys, one of the largest supermarkets in Kampala, says the ban cost that business about 120 million shillings ($32,900) as it had to return 10 tons of polythene bags to the manufacturer.

For farmers, plastic-bag waste management is a matter of life and death in Uganda, Karekaho says. Plastic bags make farmlands unproductive and kill livestock when swallowed, depriving people of their livelihood, she says.

“We have so much kaveera with no systematic way of disposing it,” she says. “We mix it with other waste. Farmers can’t use organic waste as manure because it is full of kaveera. Women use it to cook, endangering their health.”

Kenneth Tumusiime, a recycling plant manager and environmental expert, says NEMA should have consulted more closely with manufacturers and other stakeholders in the industry before executing the ban.

Tumusiime, who teaches environmental management at several universities and is a frequent media commentator on the subject, says plastic bags are not the only problem plaguing Uganda’s environment.

“The problem is not only plastics but also littering. The government should consider having an anti-littering policy,” Tumusiime says.

An abundance of plastic bags drifting through the country poses a danger to animals.

Amos Rwakaizi, a livestock farmer in Isingiro District in Western Uganda, blames the government’s failure to enforce the ban sooner for his cow’s death. The cow once gave him liters of milk every day, he says.

“I lost my cow, Kyozi, and postmortem results showed it had swallowed a polythene bag,” he says.