Skip to main content
The story you are reading was published on Saturday August 8, 2015. To read more recent stories click here. 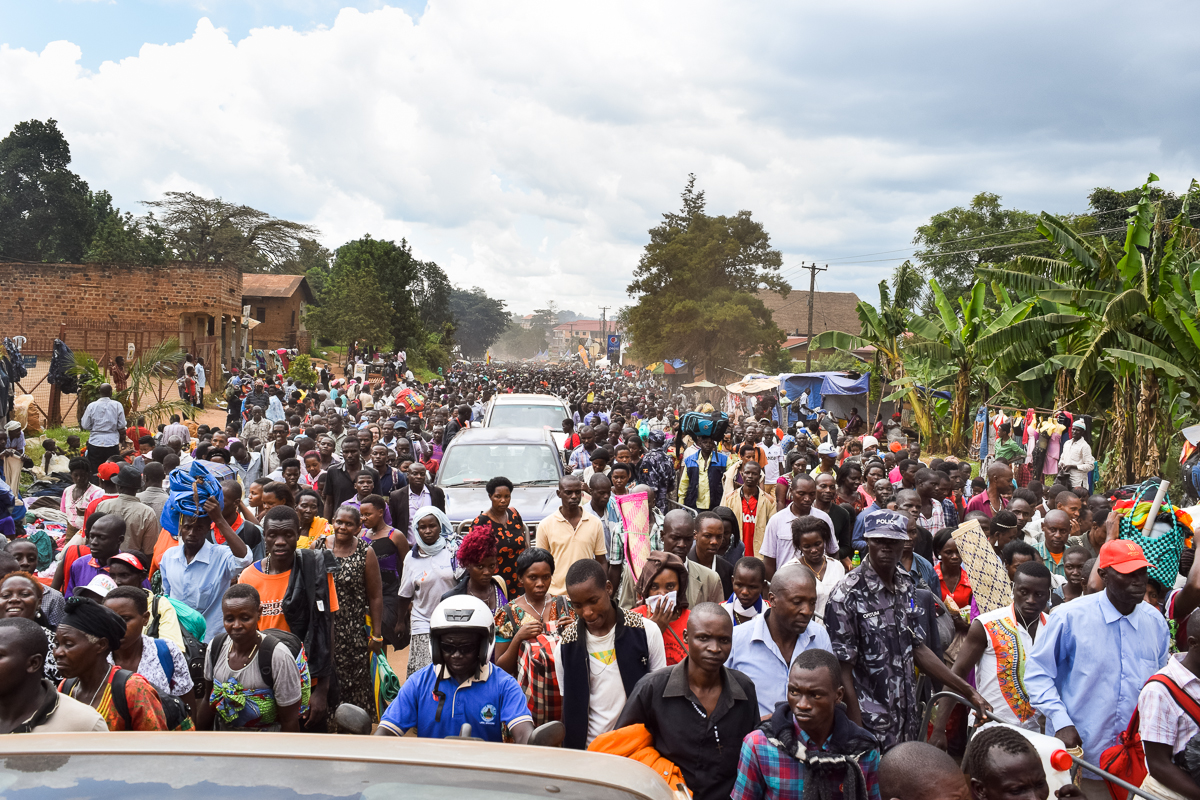 NAMUGONGO, UGANDA — Gaudensia Binogire rests on the veranda of a building at Uganda Martyrs’ Shrine, a Catholic church in Namugongo, a suburb of Uganda’s capital, Kampala.

It’s a week before Uganda Martyrs’ Day, and Binogire, 73, has just arrived at the shrine after walking for more than two weeks from her home in Bushenyi district, more than 300 kilometers (186 miles) away, with 14 other pilgrims. Pilgrims traditionally walk to the shrine to honor Christian converts killed at the site in the 19th century. The pilgrims arrive throughout the year, but especially before Uganda Martyrs’ Day each June 3.

With her legs stretched out in front of her slim body, Binogire looks strong and energetic.

“God has given me such amazing strength,” she says.

Other pilgrims stroll past the church – a gigantic round structure with a white pinnacle reaching toward the sky. Dozens of pilgrims sit on benches, waiting for a priest to pray for them. In turn, they walk to the priest, who is dressed in an ankle-length white cassock. The priest lays his hands on pilgrims and murmurs prayers. As part of an improvement project underway at the shrine, an altar is under construction at the left corner of the compound, about 50 meters (164 feet) away; visitors gaze at a man-made lake near the altar.

Christians from around Uganda and far beyond journey to this shrine throughout the year to honor a group of men killed in the 1880s for converting to Christianity.

Now, the Ugandan government is upgrading the shrine and the infrastructure around it.

Catholic pilgrimage sites worldwide attract millions of visitors, who pump tourism money into local economies. For developing and post-conflict countries in particular, that money brings jobs and infrastructure improvements. An estimated 300,000 people gathered at the Our Lady of Madhu shrine in northern Sri Lanka early this year when Pope Francis visited. The area was a war zone during a decades-long civil war that ended in 2009, but an uptick in pilgrimages ending there has brought infrastructure improvements, including train service to the town.

Similarly, official tourism statistics suggest that more than 15 million people have visited Medjugorje in Bosnia and Herzegovina since 1981, when a group of children claimed to have seen the Virgin Mary. The region around Medjugorje runs off tourism dollars.

“I wanted to have cows in my home,” she says. “Now I have them. I prayed that the Christians I lead baptize their children, and they brought children for baptism, and those who were cohabiting, wedded.”

Her prayers were answered, she says. Now she hopes to see more miracles.

The Uganda Martyrs’ Shrine is built on the spot where Charles Lwanga, one of the Christian converts, was burned alive on the orders of Mwanga, the kabaka, or king, of the Buganda kingdom. Seeing Christian converts as a threat to his power, Mwanga sought to purge his kingdom of Christianity and its adherents.

Forty-five Catholic and Anglican converts, including teenage boys, were killed in the 1880s for refusing to renounce Christianity.

Pilgrims can now visit 13 sites where the converts were martyred in the Kampala district, says the Rev. Joseph Mukasa Muwonge, the promoter of devotion to the Uganda martyrs.

In 2010 the government rebranded these sites as the Uganda Martyrs’ Trail, says Vincent Mugaba, the public relations officer for the Uganda Tourism Board. The number of pilgrims and tourists visiting Namugongo has more than doubled since then, he says.

Catholic pilgrims walk to each of these sites. Many pilgrims, including Binogire, pray to the martyrs to intercede with God for them.

More than 40 percent of Uganda’s population is Catholic, according to the Uganda National Household Survey 2009-10.

Most of the year the shrine is quiet. Christians walk here to say prayers, visit the man-made lake, make prayer requests, and buy rosaries and Bibles. But each year on Uganda Martyrs’ Day, crowds are large and security is tight. Men and women from different walks of life struggle to get into the shrine. The sweat of intrepid journeyers pervades the air until the fragrance of burning incense descends and subdues it.

Sources differ widely on the scope of the annual pilgrimage. A Vatican Radio report estimated thousands of pilgrims attended this year’s celebration. However, local sources, including police and shrine officials, say millions of people visited the shrine on Martyrs’ Day. The local estimates would rank the Martyrs’ Day pilgrimage alongside the hajj – the annual Muslim pilgrimage to the holy city of Mecca, Saudi Arabia – in magnitude. And yet the 15-acre shrine has only 1,000 seats, according to the Uganda Martyrs’ Shrine website.

Believers trek from far-off lands to worship at the shrine. Italians, Germans, Nigerians, Congolese, Rwandans and Kenyans were among those who attended this year’s Uganda Martyrs’ Day in Namugongo, says Ben Tenywa, who is in charge of booking accommodations at the shrine.

Pope Francis plans to visit the shrine in November during his first trip to Africa.

Pilgrims pay no fees at the shrine. Tourists pay admission of 5,000 Ugandan shillings ($1.50).

Figures on the government’s revenue from admissions are unavailable, Mugaba says.

Hundreds of small business owners offer goods and services to the pilgrims, including food and alcohol, lodging, tours and sex work.

But the lack of tourist accommodations makes the pilgrimage difficult, says tour operator Miriam Kyasimiire. There is no lodging near the shrine, so many pilgrims sleep on the verandas of buildings in the compound. Tourists stay in hotels far from the shrine.

The shrine’s boosters are making improvements. The government and the Catholic Church have worked together to pave roads and widen sidewalks leading to Namugongo, Mugaba says.

In addition, Muwonge says, the government is building dormitories to provide affordable lodging for pilgrims. It is also building toilet facilities and terracing the compound to make it more comfortable for lounging, he says. The church’s leaky roof is being renovated.

The lake will be dredged, and the altar will be raised to make it more visible to large crowds, Muwonge says.

The government has allocated 82 billion shillings ($24 million) to develop the tourism industry in the past year, with a major focus on faith-based tourism, Mugaba says.

Through a program it launched in January, the Uganda Tourism Board has also trained local residents to host tourists in their homes for a fee.

“We encourage home stays where many Ugandans living in Namugongo have been registered, trained and monitored to ensure they meet the right standards to accommodate tourists and make money out of it,” Mugaba says. “This gives tourists an opportunity to experience Ugandan culture and cuisine at an affordable rate. It also allows the hosts to earn extra income, which is then invested back into the economy through spending, development and tax.”

More Christians will make the pilgrimage to Namugongo once the dormitories are built, Binogire says.

Florence Batabaruka, 45, says she looks forward to sleeping in a dormitory the next time she visits the shrine.

“It will be more comfortable living in a dormitory than spending nights on the verandas,” she says.

“Tourists would consider staying a little longer if there was decent accommodation here in Namugongo,” she says.

Her company serves an average of 200 to 300 faith tourists every year, she says.

To fully exploit the Namugongo’s economic opportunities, the government must make the shrine more accessible to motorists, she says. The narrow road to the shrine cannot accommodate many vehicles.

However, Mugaba says the road was made narrow to provide wide sidewalks for the thousands of pilgrims who arrive on foot.

“It is easier to manage security when pilgrims are registered and all service providers are verified before approval,” she says.

Some Kampala residents criticize the government for spending taxpayer money on the shrine upgrade.

Florence Nabanjja, 36, a Protestant who lives in Kampala, says the government is endorsing religious practices she finds objectionable.

“They worship dead people – or their ghosts – by celebrating Martyrs’ Day,” she says. “The government is also participating in this kind of idol worship by developing the shrine using taxpayers’ money.”

Because religion is intertwined with the nation’s political heritage, the government considers faith tourism important for Uganda, Mugaba says.

“The history of religion in Uganda is also the history of our politics,” he says. “In many ways, our politics from the time of the kingdoms has been influenced by religion. Even though at one time this has been divisive, religion has also put us together.”

The investment in faith tourism will boost the country’s fortunes, Mugaba says.

“Tourism is everyone’s business and has a great impact on the economy,” he says.

The government’s primary role in faith tourism is to create opportunities for Ugandans, Mugaba says.

“Farmers, transporters, market vendors, the tax body, airlines and the guides can all benefit from a single dollar that comes through a tourist,” he says.

Binogire is optimistic that the shrine upgrade will entice younger generations to make the pilgrimage to Namugongo.

“We want young people to start coming here, not just the old ones,” she says. “That is one of my prayers this season.”