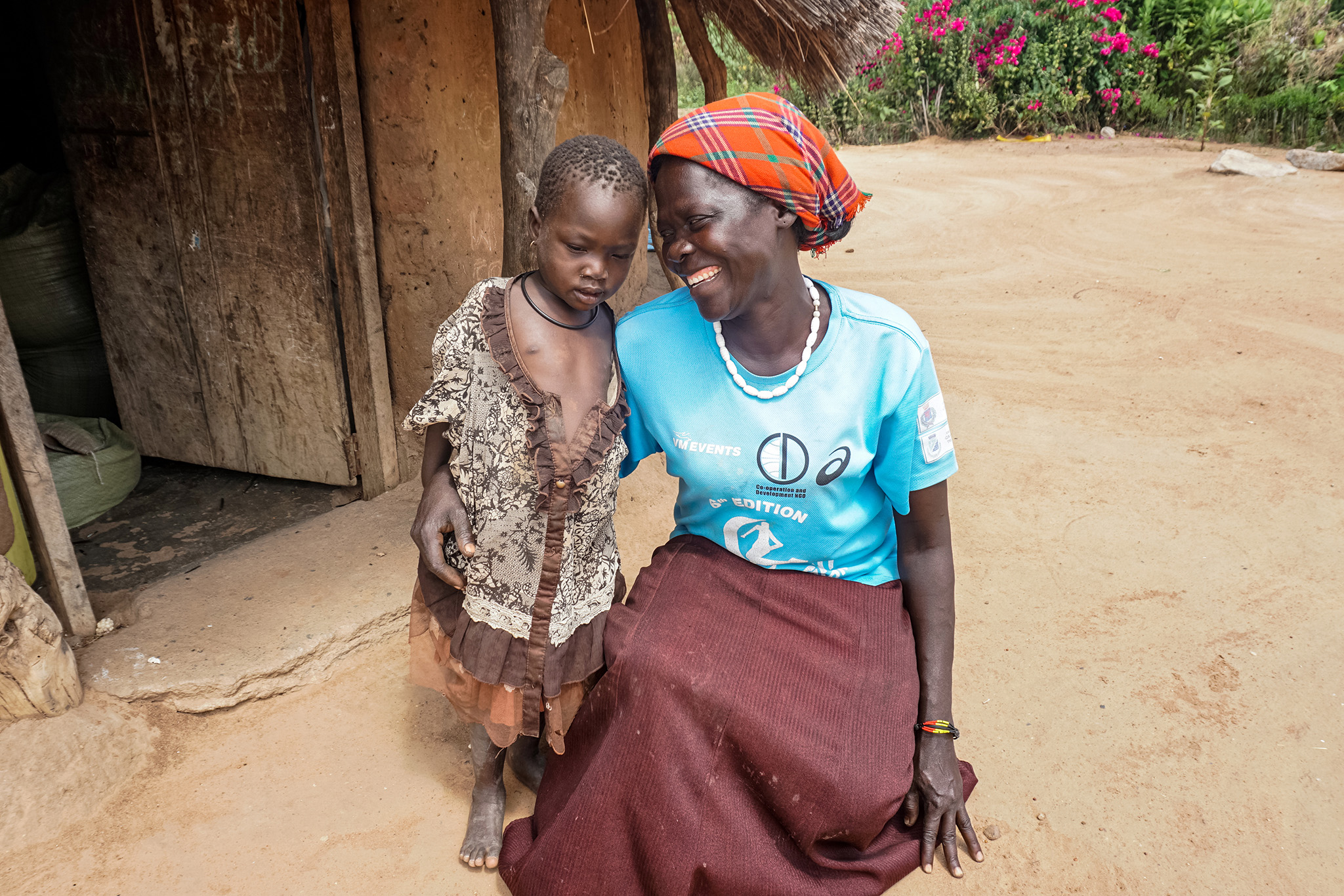 KOTIDO, UGANDA — In 1986, when Atyang Ann Mary was just 17 years old, her parents forced her to drop out of school and marry a man three years older than her. Atyang, devastated, couldn’t say no. Girls from Uganda’s Karamoja region weren’t allowed to reject their parents’ decisions about their lives, says Atyang.

“After three years of marriage to the boy and one child together, my parents chased him away because he was poor. They negotiated with an elder man, who was already married with three wives. He paid my parents 20 cattle in dowry,” says Atyang, 50, frowning.

That marriage lasted six years and produced one child. The second husband suffered from a mental illness and almost killed Atyang with a spear once. She escaped with her first child and the child she’d had with him and went to Soroti, a district about 100 miles away. She got involved with a man and later learned he was a member of the Lord’s Resistance Army, a rebel group charged with crimes against humanity in northern Uganda spanning more than three decades. 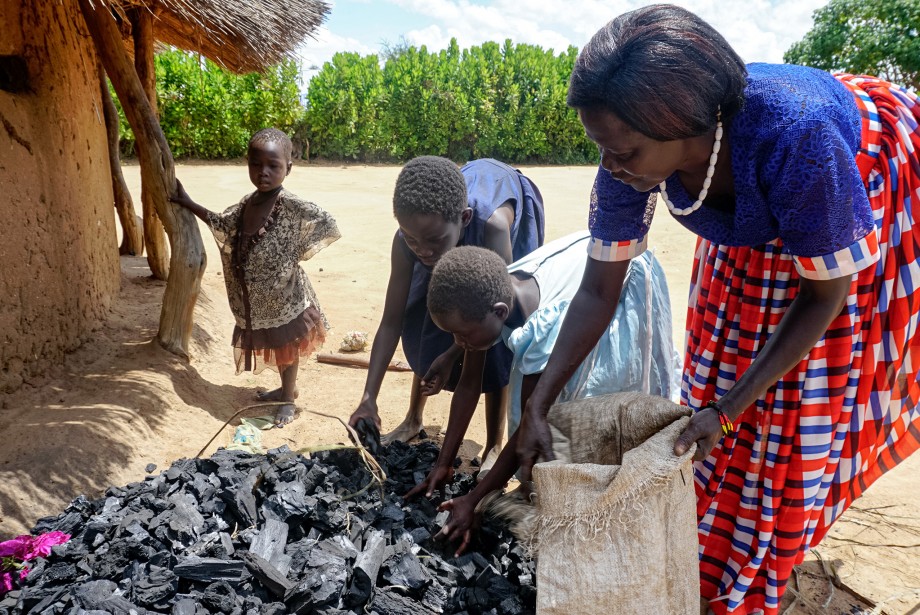 Atyang Ann Mary and her two daughters, Nadaka Maria, 9, in the middle, and Lomiko Esther, 6, gather charcoal for cooking.

Atyang had another child with that husband, though she had heard rumors that he’d killed his previous wives. She dismissed them because he did not treat her badly. That is, until he tied Atyang’s arms and locked the door to her room after she confronted him about his rebel activities. She escaped through a window and eventually made her way back to Kotido, to start her life as a single mother of three children.

She became a successful businesswoman, brewing local liquors she had learned to make in Soroti. Then, a man whose advances Atyang had rejected broke into her house and forced himself on her while his friends watched.

Nineteen years later, Atyang says the pain is unforgettable. “I had heard about women and girls being raped in a way that is traditionally accepted in my community, and now it had happened to me,” she says. “That filthy act of a man forcing himself on a woman who didn’t consent stays with you forever.”

Atyang’s trauma deepened several days later, when she saw the man who had raped and impregnated her walking around the community. He was never charged for the crime, in part because Atyang never reported it. Because she wasn’t a young girl – and because she sold liquor – Atyang says she knew the police wouldn’t follow up on the case.

“It’s then that I knew I had to engage women in my community to do something about this form of violence,” she says.

The World Health Organization estimates that 35% of women worldwide have experienced either physical or sexual violence from an intimate partner, or sexual violence from a non-partner, at some point in their lives. Heightened awareness and activism in recent decades, including the United Nations’ “Orange the World: 16 Days of Activism Against Gender-Based Violence” campaign, have elevated the global discussion around gender-based violence.

But in Karamoja, it’s difficult to stop this brutality, says Okello Sam, a gender officer in Kotido district.

“Cultural practices – such as courtship rape, widow inheritance, forced marriage – that are widely accepted by community members are the main factors behind gender-based violence in Kotido district,” says Okello. 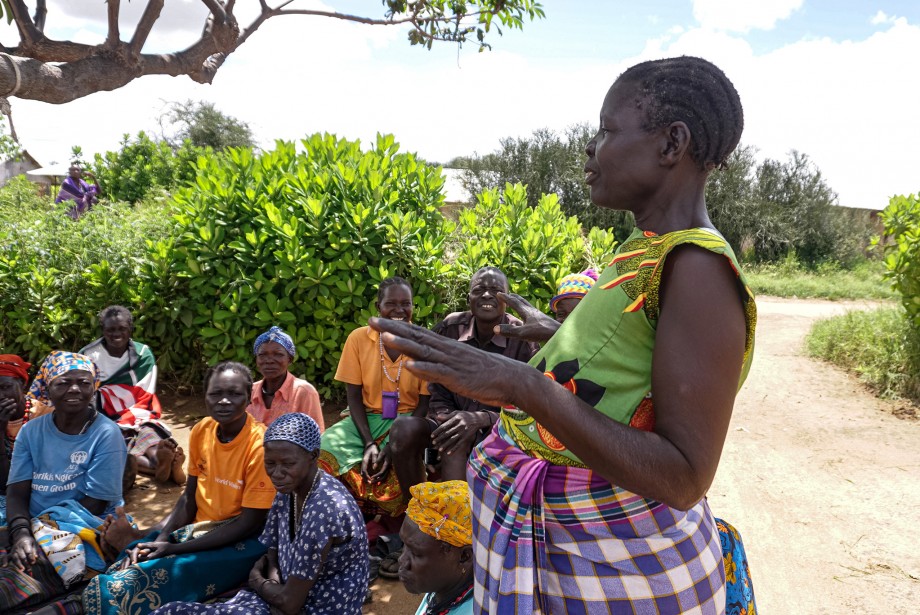 Adiku Juliana, vice-chair of the St. Kizito Anti-Violence Club, talks to fellow members. The club was formed to resolve cases of physical and sexual assault against women in Uganda’s Karamoja region.

Violence against women and girls is one of the most systematic, widespread human rights violations in Uganda, according to a 2018 United Nations Population Fund report, “Leaving No One Behind in Karamoja.”

The 2016 Uganda Demographic Health Survey shows that up to 52% of women have experienced physical violence in Karamoja since age 15, ranking seventh out of the 15 regions surveyed. Overall, 22% of Ugandan women ages 15 to 49 had experienced sexual violence, and 13% were assaulted within the year preceding the survey.

In 2009, Atyang joined 19 other women in Kotido’s Panyangara sub-county district to form the St. Kizito Anti-Violence Club, to support women who have experienced those crimes.

Auma Anna, 20, is one woman who has benefited from the club. In 2016, she was sexually assaulted by a man who had tried courting her and been rejected. One day, as she returned to the market after an errand, she was attacked and surrounded by the man and his friends, who beat her before she was raped.

“I was then carried to my parents’ home, and the boy who raped me told me, ‘You think you are special. Go tell your parents what I did,’” she says.

Auma says that when her parents learned what happened, they reported the case to a member of the anti-violence club, which took the case to the police. The man is now in jail.

“We categorize these cases: those that we can handle as a community and those that we refer to police,” says Akidu. “Cases of rape and defilement, those we always refer them to police, but cases like those of widow inheritance and forced marriages, the club mediates between families that are involved in a dispute. With these we have been about 80% successful in the cases we handle.”

Gender-based violence in Karamoja is fueled by widespread cultural acceptance of such behavior. Wife battering is generally considered acceptable, with 49% of women and 43% of men believing that a man should be allowed to beat his wife, according to the UNFPA Karamoja brief.

Auma Ann, 20, tends to her sorghum garden in Karamoja’s Kotido. At 16, she was raped and reported the man to the St. Kizito Anti-Violence Club. The man was arrested and is now in prison.

That’s why, after an initial group of 20 women members, the St. Kizito Anti-Violence Club began to recruit male members. Lokure Daniel, the group’s secretary, says there are now 30 members scattered in different villages. Their presence has raised awareness of the effects of gender-based violence on women and children.

“The community is becoming more aware that you have to convince a girl to like you than rape her. Some have come to understand that it’s dangerous to rape a girl and that it can take you to prison,” he says.

Lokul Longor, 50, says that after being approached by anti-violence club members and being educated about violence against women, he stopped beating his wife. He believed beating his wife would make her obey him, but it didn’t.

“I was able to learn that beating a wife is a violation of her rights and illegal. I learned that it’s only through conversation that we can address our differences,” he says.

However, the club’s efforts haven’t always been successful, says Akidu.

“In some cases, people gang up and attack us when we are following up on some cases. So, we end up withdrawing, leaving some cases unsettled,” she says.

Atyang says at one point, she learned that some had planned to torch her house because of a rape case they handled, which had resulted in a man’s imprisonment.

“To avenge [him], his friends came and hid in the nearby bush, where they were caught by some community members hiding and were interrogated. They said they had planned to burn my house with me inside because I was the reason their friend was in prison,” says Atyang.

But these threats don’t stop their work, Akidu says.

“We trace culprits by the prints of their sandals that are made of car tires and engage the two families into a dialogue. But if the culprit isn’t cooperative and wants to fight, we engage the local leaders, police and then the court,” she says. 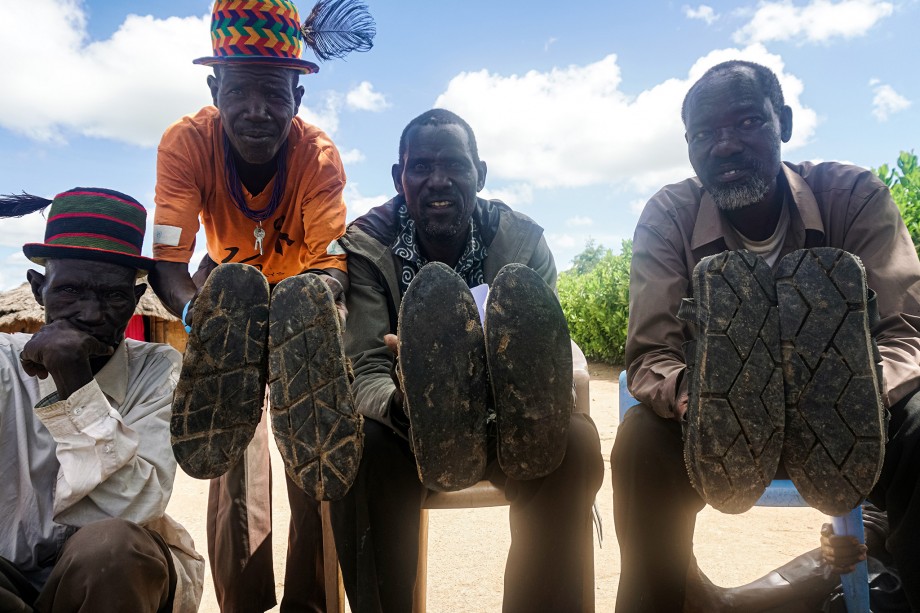 Male members of St. Kizito Anti-Violence Club show off the soles of their sandals, made from tire treads. They can sometimes trace perpetrators of gender-based violence by matching their footprints to those at a crime scene.

Agoe Joan, legal officer for the Uganda Association of Women Lawyers, a Kampala-based NGO offering legal services in Kotido and Kaabong districts, says rampant poverty aggravates gender-based violence.
Okello, gender officer of Kotido district, agrees. He says that the desire to accumulate wealth makes the parents of some girls offer them in marriage to older men.

“Some parents sometimes force their school-going children to drop out and marry them off in exchange for cattle. Prolonged dry spells that lead to death of the community’s animals is one of the major causes of poverty in this highly pastoral society,” he says.

Tumwesigye Gerald, the Officer-in-Charge at Kotido Central Police Station, says gender-based violence is promoted by the community, especially when it comes to courtship rape.

“The parents of the girl don’t care whether the girl is a minor or not. The parents will force her to marry a 50- or 70-year-old man because they want to get wealth,” says Tumwesigye, adding that police will often investigate these cases. But nothing much can be done, he says, because community members don’t know or refuse to acknowledge the laws preventing child abuse or forced marriage.

Okello says that with community members fighting gender-based violence through anti-violence clubs in Karamoja, there is hope that the perpetrators of these crimes will eventually be persuaded to stop.

“The great thing about the clubs is that they are made of community people who know and understand the culture, the ways of life and the laws in place, and try to explain these laws to the community,” he says. “They also explain how some traditions are no longer relevant today, and this has been helpful to some extent.”

Some interviews were translated from Karamojong by Moding David and Ochero Maracello.