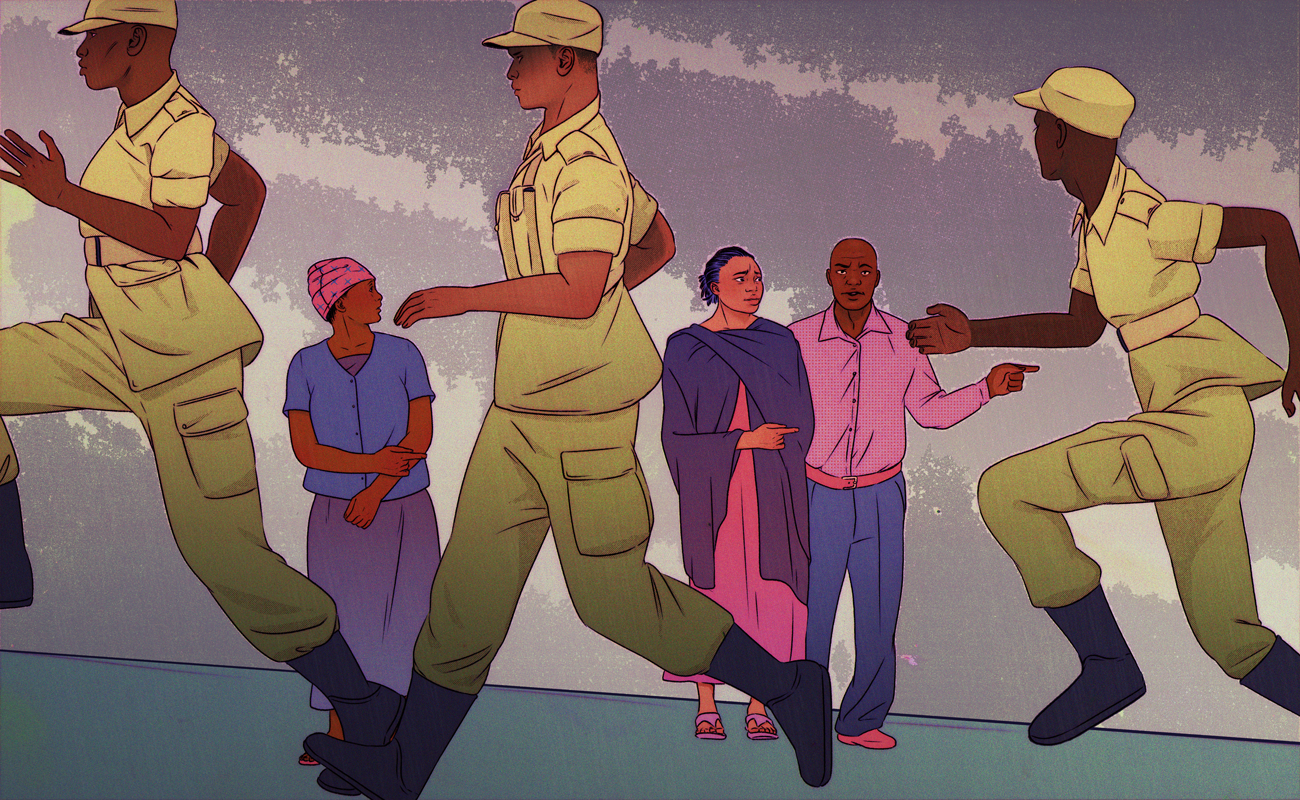 NSUMBI, UGANDA — It was 8 p.m. when a customer asked Lydia Namubiru, a mobile-money agent, if she had 500,000 Ugandan shillings ($135). The customer wanted to withdraw cash from his mobile account.

When she confirmed that she did, he opened his long gray coat and flashed a gun.

Her whole body trembled, she says, as she stuffed the cash from her drawer into a black bag.

“I remember the world becoming blank and my legs weakening the moment he left,” she says.

Armed robbery and other petty crimes are spiking in and around Kampala, Uganda’s capital – including in nearby Nsumbi village. The government aims to combat cases like Namubiru’s through so-called Local Defence Units, or LDUs, intended to teach citizens how to quash safety threats in areas without a strong police presence.

This group, provided with firearms and trained for three months by the Uganda Peoples’ Defence Forces, the country’s army, launched in 2018 at the direction of President Yoweri Museveni. But it hasn’t gone entirely as planned. Enrollment is about a quarter of what officials anticipated. Members are often deployed in areas they don’t know in a multilingual country with vast cultural differences between regions.

Communities are torn as to whether a team dedicated to improving safety has actually done so.

“I don’t know the LDUs in my community,” says Robert Muwawu, chairman of the local council that governs Nsumbi village. When people signed up for the LDU training program, he says, they assumed they’d be deployed back to their home communities. That didn’t happen.

“People can’t communicate with them,” he says of the group now patrolling Nsumbi. “And they don’t know the community very well, to respond to alarms as fast as they could.”

The national government intended to recruit 24,000 Ugandans between 18 and 35 to patrol communities in and around the capital. By May 2019, officials had deployed about 6,000 people.

Deo Akiiki Asiimwe, deputy spokesperson for the army, which runs the LDU program, says the low enrollment is due to limitations in the budget, and the program will eventually expand to other parts of the country. He declined to provide specifics about the training.

“We couldn’t deploy them in their own communities because they are few and Kampala metropolitan is wide,” he says. “That is why we deployed them in various communities, to try to cater to the demand.”

LDU members, young men and women clad in green uniforms who receive 200,000 shillings ($54) a month, did not comment because they are not allowed to talk to the press.

But their success is mixed, and the group is shadowed by allegations some members abuse their authority.

While violent crime such as murder decreased last year, according to an annual report by the Uganda Police Force, aggravated robbery and other similar crimes increased.

Fred Enanga, the Uganda police spokesman, says police can’t comment on the units because they are under the supervision of the Ugandan army and not the police force.

But the continued robberies have made some people question the worth of the specialized teams.

The teams start patrolling at 10 p.m., she says, but she was attacked earlier in the evening and nobody came to her aid.

We couldn’t deploy them in their own communities because they are few and Kampala metropolitan is wide.Deo Akiiki Asiimwe, deputy spokesperson for the army

The coronavirus crisis has not helped the program’s case. Mukwaya Livingstone, a Nsumbi resident, says he’s witnessed an increase in violence during the pandemic from unit members who are taking their new authority too far.

A friend, he says, was sitting on his veranda in April, an hour after the start of a coronavirus curfew. Suddenly, members of the unit attacked him.

“We heard him crying from beating by the LDUs,” he says. “He still experiences back pain.”

Police have received additional complaints of wrongdoing by members deployed in places like Nsumbi, including beatings and the destruction of national identity cards. The army temporarily recalled the units this summer to offer refresher training.

The Defence Forces is aware of the crimes committed by some members and has taken action to penalize them, says Asiimwe, the army spokesperson. But he cautions they are not representative of the majority of the group, whose goal is to tighten security in communities.

Some places are starting to see improvement.

Nelson Nsubuga, local council chairman for Ganda village, an area just outside of Kampala, says these units have improved safety.

“With the deployment of the LDUs, the crime rate in Ganda is down by about 50%,” he says, adding that he hasn’t heard about any new cases of purse- or phone-snatching or robberies at gunpoint.

“All those who think they can steal in Ganda should not.”