Skip to main content
The story you are reading was published on Monday September 7, 2015. To read more recent stories click here. 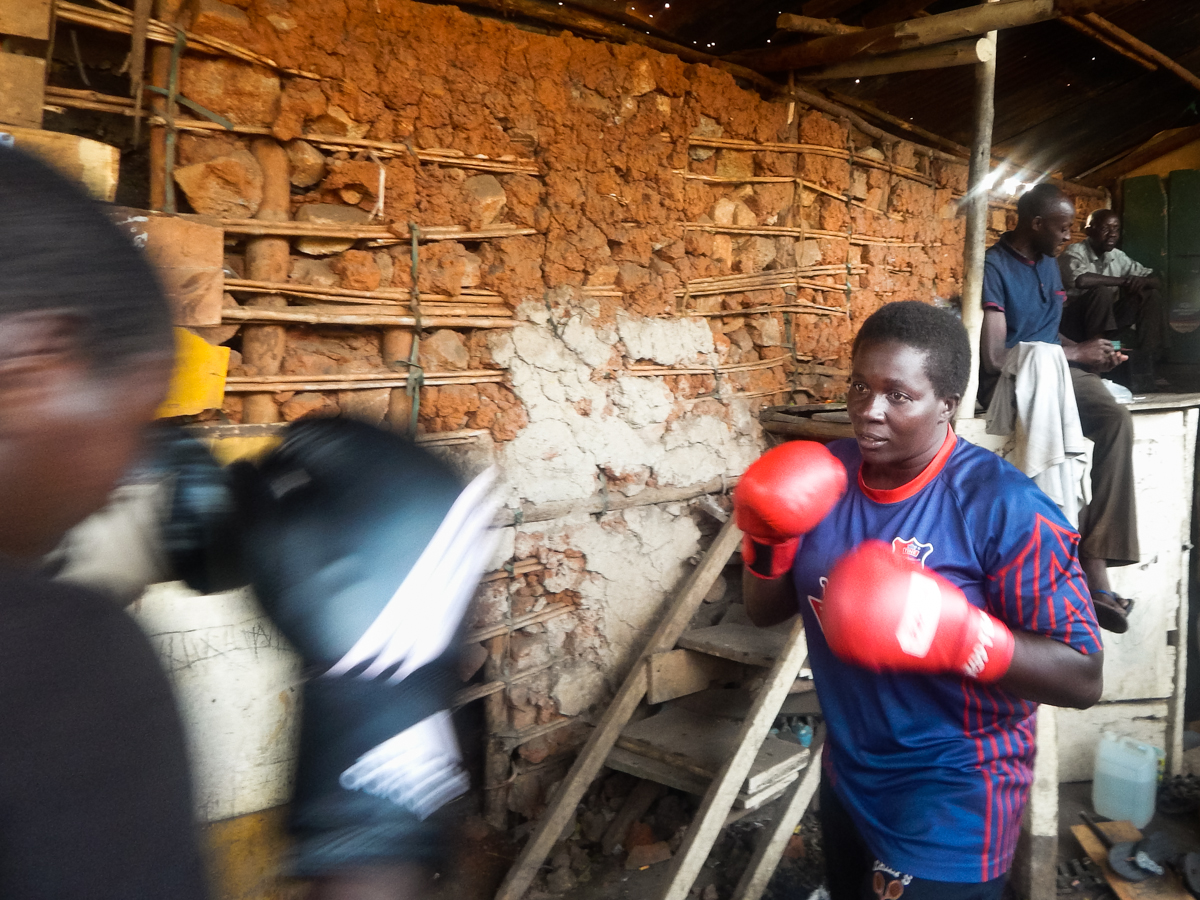 KAMPALA, UGANDA – In an otherwise-empty hall, Hellen Baleke and Diana Turyanabo repeatedly hit a green punching bag with their fists, the sisters’ faces dripping with sweat.

Baleke, 29, and Turyanabo, 24, come to this boxing club, known as the Rhino Club, daily for practice.

The club is deep inside Katanga, a low-lying informal settlement in Kampala, Uganda’s capital. There, sewer channels dissect shanty towns made of mud and wattle sticks into little settlements. Young, unemployed men lounge on shop verandas blowing curls of cigarette smoke into an atmosphere already pervaded by the smell of sewage and rotting garbage.

Baleke started boxing more than a decade ago, as a way to protect herself from sexual predators, and her sister would join her later.

An attempted rape prompted the decision. The girls had moved with their family from their home in a rural part of Kayunga District into the low-income neighborhood in search of a better life. Their mother, a single parent of three girls, ekes out a living collecting banana peelings from the neighborhood and selling them as animal feed.

I could not sleep. I had this strong desire to learn to fight back. I saw myself beating up this man the next time he attacked me. My wish became an obsession.Hellen Baleke, boxer

While Baleke walked near her home three months after the move, a man made sexual advances toward her, she says. She resisted, and when he tried to rape her, she says she hit him with her bare hands and tried to free herself. Within minutes, a crowd had gathered to watch the scuffle. Men booed Baleke for trying to fight back and encouraged the man to beat her severely.

“I felt really humiliated,” Baleke says. “There was not a single sympathizer in the crowd. They were all supporting the guy.”

Baleke says it was her daring to fight a man that drew a crowd, not the fact that the man was trying to sexually assault her.

With a crushed ego, Baleke, then 18, returned to her home. She had survived the attack, but she wasn’t sure of her future. Would she be as lucky the next time she was assaulted?

“That night was very long for me,” she says. “I could not sleep. I had this strong desire to learn to fight back. I saw myself beating up this man the next time he attacked me. My wish became an obsession.”

A few days later, she approached the coach of the Rhino Club and asked to join. Her sister, Turyanabo, joined her at the club a few years later. The two became pioneer female boxers at the club, and now they’ve created a community of women fighters. They’ve mentored a team of girls, and they train them to use their boxing skills to fight back when they’re attacked.

Girls and young women are vulnerable to violence in Kampala’s slums. About 30 percent of girls between ages 14 and 24 have been raped in those neighborhoods, according to a 2015 report published by SAGE Open, an online journal. About 37 percent have experienced physical fights, and 28 percent have been threatened or injured with a weapon. 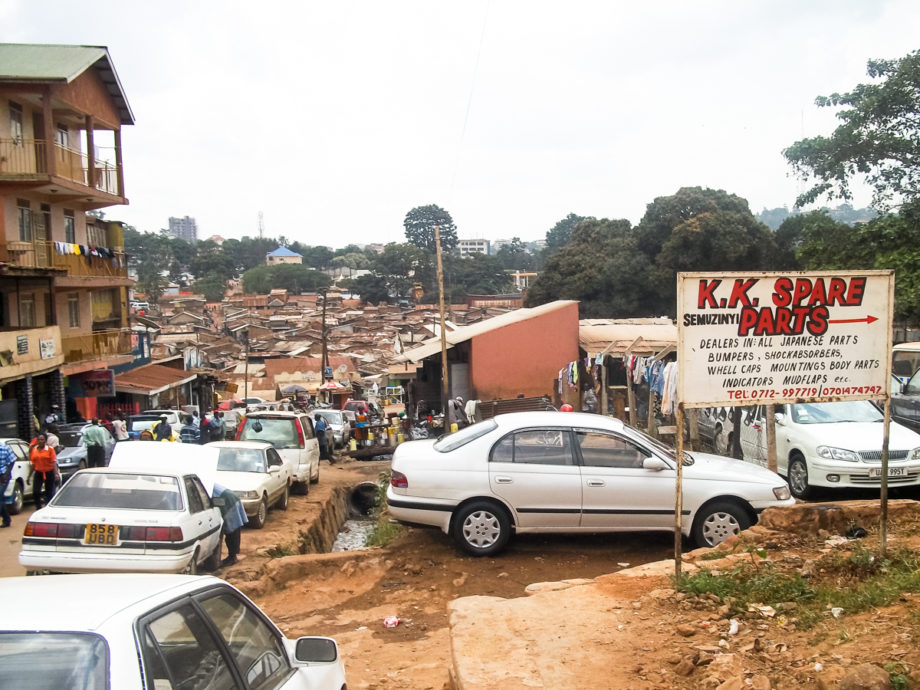 In Katanga, a densely populated neighborhood housing about 25,000 people – 660 people per acre ­– crime is a major problem. The community hired a group of men four years ago, to patrol the area at night, “because robbery, rape and murder were frequent,” says Fred Isabirye, defense secretary of Kimwanyizone, which is one of the three administrative units of Katanga. He doesn’t have hard data but he says he knows anecdotally that while the slum is safer now, muggings and thefts still happen.

“Where there are too many people, most of them unemployed, crime cannot be completely wiped out,” he says.

Isabirye estimates that seven of every 10 men are unemployed.

Boxing was Turyanabo and Baleke’s strategy to survive in this environment.

“Men gave themselves the right of way to do whatever they wanted,” Baleke says, describing women’s vulnerabilities in the slum. “They took charge of our lives just because we were perceived as weak. We had to break this monopoly.”

Moody Ntambi, the boxing coach at the Rhino Club, says he thought Baleke was joking when she asked to join. There were no female boxers at the club at the time, he says.

To go along with it, he says he asked her to pay 15,000 shillings ($4.20) per month, the standard monthly membership. Baleke disappeared, he says, but came back after some time.

He invited her for morning road runs, a standard training routine for each of the club’s members.

“These are so rough, most of my men usually fail to get to the finishing point,” he says. “I thought she would drop off along the way. She got so tired the first day, but she finished with us.”

Ntambi says he immediately enrolled Baleke in the club at no cost.

In eight months, Baleke had become so skilled that she was ready to box for the club at the local level, Ntambi says.

“She has now brought many other girls in the club, even younger ones,” he says.

The man who assaulted her and drove her to take up boxing has since joined the club, she says, and she trained him herself.

Turyanabo says her older sister came to her aid whenever she was bullied or threatened, but she knew she needed to develop her own self-defense skills.

“No one would be there for me all the time, yet danger was always looming,” she says. “I was also becoming ripe in the eyes of philandering men. The place I called home was a hub of such a man. I did not have any other home, so I had to find a way of living safely in this place.”

Boxing became more than just self-defense for the sisters. Baleke and Turyanabo grew into amateur boxers, fighting in national and international competitions. Baleke has participated in 18 boxing bouts locally and in cities including Nairobi and Mombasa, Kenya, and won 16 of them. Turyanabo has had 11 bouts locally and outside Uganda and won eight of them.

Last November, the women represented Uganda in the AIBA Women’s World Boxing Championships in South Korea. But Baleke was knocked out in 11 seconds by Claressa Shields, an Olympic gold medalist from the U.S., and Turyanabo lost 3-0 to Heidi Henriksen, another U.S. boxer.

Despite the sisters’ success, money is still tight. Local politicians sometimes ask the sisters to perform to draw crowds at campaign events, they often agree. But the pay is only 5,000 ($1.40) to 6,000 ($1.68) shillings per bout, they say. They feel exploited, and Baleke sometimes declines to perform. But the money meets some of their needs, they say.

“At least I can go to the salon after such a trip,” Turyanabo says.

Now, Baleke and Turyanabo train 17 women and girls at the Rhino Club. Many of the women and girls struggle to find time for training, Baleke says, because they attend school and work to support their families.

But some, such as Maureen Nakiryowa, become serious fighters. Nakiryowa has represented Uganda in international competitions.

“I found two girls in the boxing ring and later learned that they were sisters,” Nakiryowa says, recalling a visit to the Rhino Club after she saw a poster advertising boxing training. “I admired them but at the same time feared them. Later, I watched them play in a friendly game known as Mulago Suicide Match. Baleke scored many points, and I decided to face her and ask her if I could ever be like her.”

Baleke encouraged her to join the club, and Nakiryowa has been boxing for eight years now.

Baleke and Turyanabo are humble and don’t pick fights just because they’re good in the ring, says Ibrahim Sekimpi, a member of the club. But he says the sisters, and the other female boxers, have little support.

“The girls do not have a boxing association to fall back to,” he says. “They operate under the shadow of men’s boxing associations. They do not get any financial reward for their talent, yet they have personal needs.”

But boxing has brought tangible benefits. Baleke says neither she nor her sister has been attacked in their community. Security has improved in the neighborhood, she says, and the culture there has changed, too.

The man who assaulted her and drove her to take up boxing has since joined the club, she says, and she trained him herself. That was a development she says she’s happy about, because she’s confident in her own strength.

“I guess deep inside him, he knew I was no longer the weak girl he had humiliated,” she says.