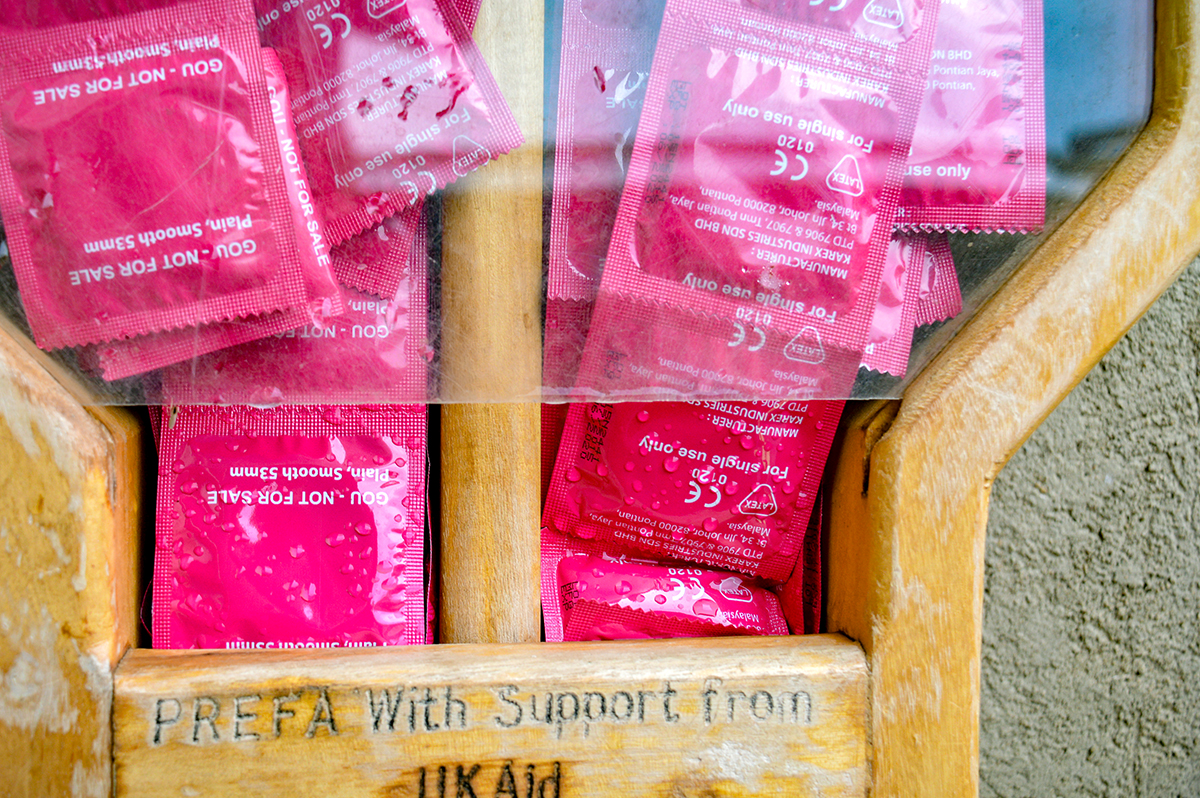 MASAKA, UGANDA — Nadia Nakato, 20, is a commercial sex worker at the Dimo fish landing site in Masaka. On a bed covered with a floral red and blue blanket, she awaits her customers, most of whom are fishermen who ply Lake Victoria’s waters before dawn each day.

The fishermen’s work is dangerous, and the sex is dangerous, too. The 20-year-old says she’s not sure if she has HIV. She hasn’t gotten around to taking advantage of the free testing yet. But she says she won’t provide her services to men who don’t wear condoms.

“I chase [away] whoever does not want to use a condom,” she says.

INSIDE THE STORY: Information about the prevalence of HIV in Ugandan fishing communities is scarce, and what little is available often doesn’t include the voices of those most affected: the fishermen and sex workers themselves. One Global Press reporter set out to add their voices to the conversation. Read the blog.

This puts her at somewhat of a disadvantage in her line of work at the Dimo fish landing site, where she rents a room with exposed bricks for 3,000 Ugandan shillings (82 cents) per night. She says she has been selling sex there for seven months at 5,000 to 7,000 shillings ($1.37 to $1.92) per client.

“They don’t want to use condoms,” she says.

The local government in the Masaka District partners with nongovernmental organizations to educate, test and treat people in fishing communities, but the HIV prevalence remains high.

Some say men and women in fishing villages don’t use the available free condoms because the dangers of fishing on Lake Victoria create an air of fatalism. Nakito says some with HIV feel they have nothing to lose and therefore aren’t cautious about preventing its spread.

“Those who are sick are dishonest. They want to have sex with anyone,” she says.

Benard Sseruyange is the clinical officer at St. Joseph General Clinic at Dimo fish landing site, which provides HIV counseling and testing services and refers clients for antiretroviral treatment. He says in an average month the clinic attends to about 25 to 30 clients who come for HIV testing.

“There are many sex workers here. They sell their body to get food,” he says.

“Yesterday but one man came with a lady. The lady tested positive and the man tested negative, but the man was willing to continue in relationship,” he says. “I counseled them so that the lady starts treatment to reduce chance of infecting him.”

Kagwa Karoli Lwanga is a fisherman living with HIV, who has been fishing at Dimo landing for 25 years. He says a refusal to use condoms is responsible for the spread of HIV in fishing communities.

“They tell us to use condoms, but many don’t,” he says. Lwanga says he uses condoms — sometimes.

Olivia Nakanwagi, coordinator of the program to combat HIV for the Masaka District local government, says fishermen who survive Lake Victoria everyday have a feeling of invincibility.

“Fishermen have a lot of disposable income. They are sure of getting money daily. Fishing is also deadly. The fishermen feel since they have been in the lake, which is deadly, and survived, they decide to celebrate by buying sex workers,” she says.

Some say men and women in fishing villages don’t use the available free condoms because the dangers of fishing on Lake Victoria create an air of fatalism. Nakito says some with HIV feel they have nothing to lose and therefore aren’t cautious about preventing its spread.

“The sex workers target fishermen because they know they have a lot of money, which they use carelessly,” he says.

“There are many men and few women in fishing communities; they leave their families and come to fish, so they end up being unfaithful,” she says.

Joseph Ssemakula, a fisherman with HIV who has worked at the Dimo landing site for 15 years, blames idleness and alcoholism for high HIV prevalence rates in fishing communities.

“You know we finish work early, at around 8 a.m., and we start doing other things. Then there are many bars here. After drinking you realize that so-and-so is beautiful,” he says.

Lwanga says the fishermen who are already HIV positive should take their antiretroviral medications, or ARVs, and therapy to reduce the risk of passing on HIV to their sexual partners.

“They should take their ARVs, like me, not to spread it,” he says.

Sseruyange encourages clients to test for HIV and to start on treatment for those who are eligible.

Despite the risky behavior he sees, Kawembe believes further information will help those at Dimo better understand the dangers of acquiring HIV.

“People can be educated. They need to be sensitized,” he says.