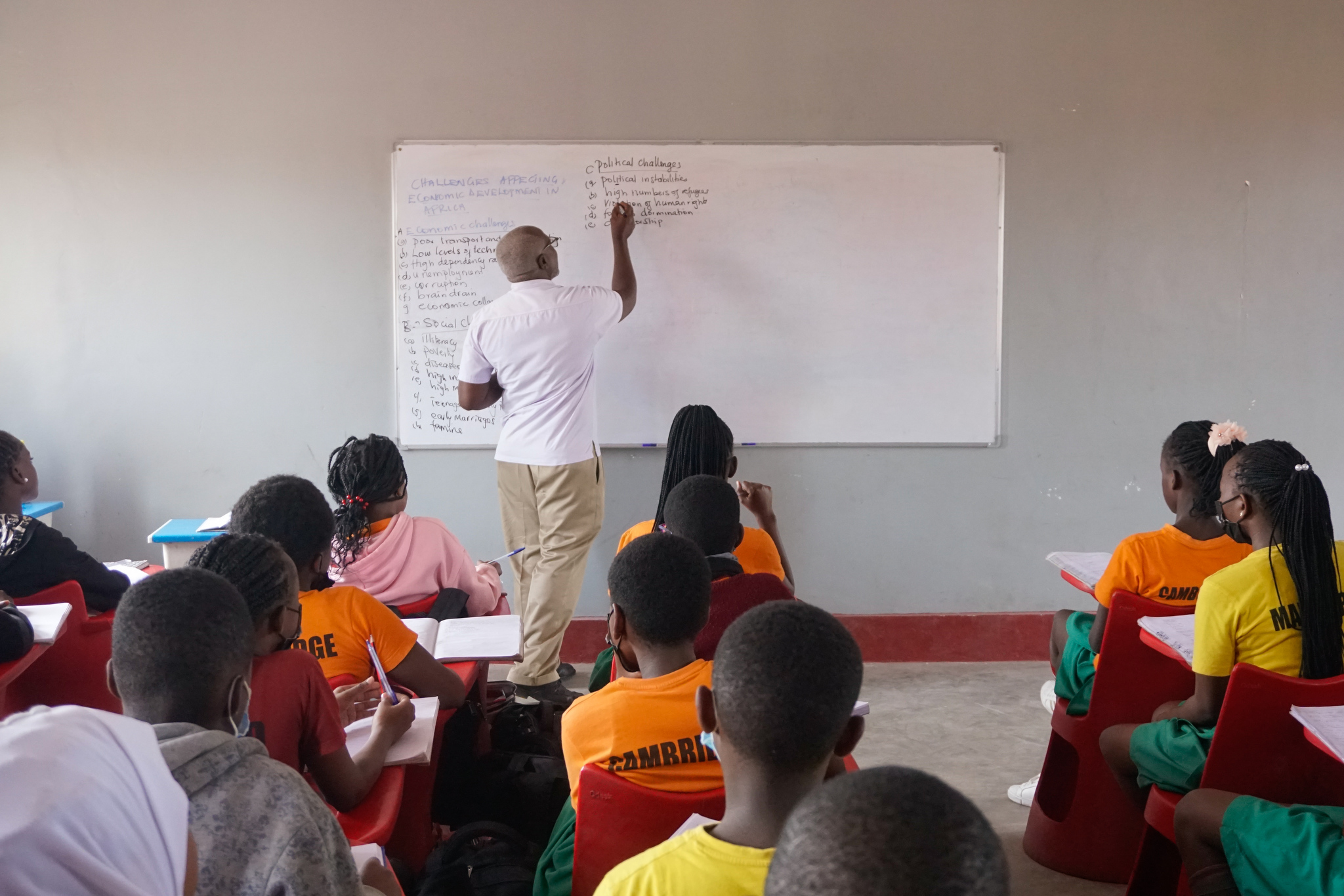 KAMPALA, UGANDA — When Bruce accepted his dream job of school principal in January 2020, his first task was to navigate students and teachers through a pandemic. Two years later he was ready for his school to reopen and fill with pupils again. But a final check of the building before the reopening was met with a warning from one of his staff members — to avoid eating or drinking anything given to him.

“When I asked her why, she dashed off, saying, ‘Sir, this is for your good,’” Bruce says.

Her words planted a seed of paranoia in Bruce’s mind; he became suspicious of those around him, a team he should have trusted. The father of three says he became so concerned that someone may try to poison him, he felt he had no other option but to leave the job he loved and return to classroom teaching. He does not want his full name used for fear of repercussions.

Bruce is one of many Ugandans who have been affected by years of poisoning allegations among government officials, which have created a climate of fear — a fear that has now trickled down into the community. The threat of poisoning, by those who envy a person’s position or who don’t like what that person says or believes in, looms over those in powerful positions. Now a politician who says she survived several poisoning attempts is asking the government to do more to investigate such deaths and help restore community trust.

According to government data, there have been more than 1,800 reports of murder by poisoning in Uganda since 2009, but only three people have been convicted. The Uganda Police Force declined to comment on the matter. 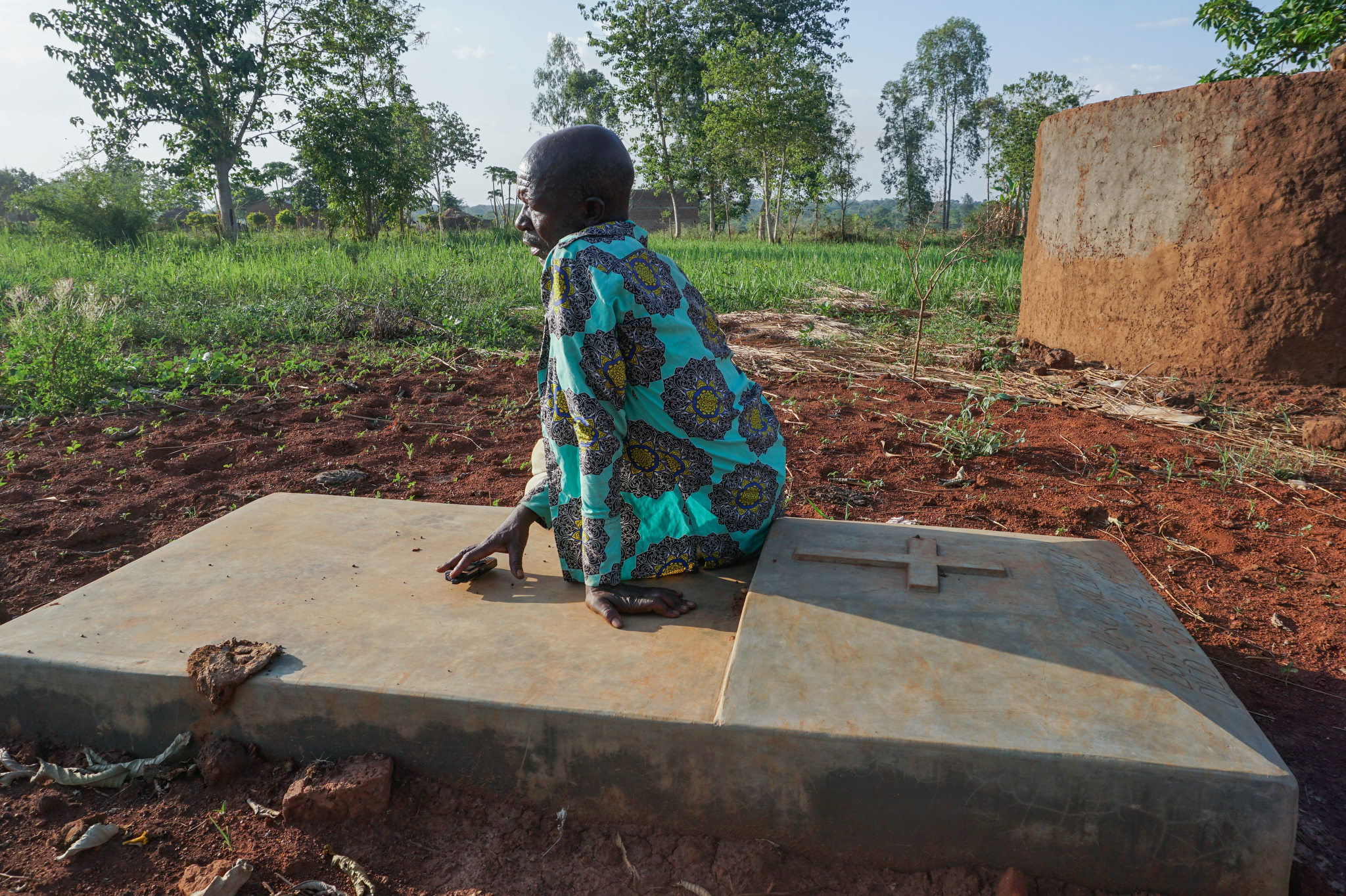 Poison paranoia heightened following the March death of former speaker of Parliament Jacob L’Okori Oulanyah. At his funeral, his father, Nathan L’Okori, alleged his son was poisoned, sparking further speculation on social media. His assertions have not been verified, and he hasn’t elaborated on who might be responsible or why someone would want to end the life of Oulanyah, 56, who had been serving as speaker for just under 10 months when he died. The official line from Parliament is that he died of multiple organ failure following a cancer diagnosis in 2019.

Godfrey Kiwanda, former state minister of tourism, wildlife and antiquities and former member of Parliament for Mityana North, who was a friend of the late speaker, says when Oulanyah was receiving tests to find out the cause of his sickness, he came to him and discussed his suspicion that someone may have tried to poison him.

“But he had no proof, he could have been wrong,” Kiwanda says.

Kiwanda says it’s important to have all these allegations verified scientifically.

“The government should carry out an investigation to find out the truth because many people have come out with claims of poisoning,” says Kiwanda, who admits he also fears being poisoned, choosing to either eat at home or in quieter restaurants that serve buffets to minimize the risk.

A government analytical laboratory in Kampala, the capital, confirmed the government does investigate allegations of poisoning, as the laboratory tests samples at the government’s request, but refused to comment further, citing ethics and security concerns.

President Yoweri Museveni is attempting to quash the allegations, turning to his Twitter account to tell those who say Oulanyah was killed that “the police should look for you.” He added in a post just days after Oulanyah’s death: “Oulanyah died in a reputable hospital, for someone who is educated to go and say he was killed, NO. We cannot mourn with this indiscipline.”

Meanwhile the parliamentary canteen, a once-bustling hub of government headquarters where members can enjoy a daily free meal, remains quiet as staff and officials prefer to bring their own food and drinks.

“The scare is real,” says Wilfred Niwagaba, independent member of Parliament for Ndorwa East. “The parliamentary canteen collapsed. They used to serve drinks, food, beer, but these days you can hardly find anyone there. People are afraid of poisoning.”

There have been more than 1,800 reports of murder by poisoning in Uganda since 2009, according to the government.

Betty Nambooze Bakireke, member of Parliament for the Mukono municipality, alleges she was poisoned in 2007 while campaigning against evictions in her area and says she still has health problems as a result.

In a message she sent from her hospital bed in the United States, while awaiting surgery for spinal injuries she sustained in 2018, she recalls how she was “grabbed” by police and thrown into a car. She says officers then sat on her and “started pricking me with needle-like stings.” At the station she started vomiting and was taken to the hospital. On her release medical staff told her that she had been injected with “liquids,” but they couldn’t establish precisely what, she says.

Often referred to as the “iron lady” by her supporters for her strength in standing up to those more powerful than her, Nambooze still fears being poisoned and takes precautions whenever she appears in public.

“I move with my tea,” she says, referring to her habit of taking her own food and drinks wherever she goes. “You will always see me with my cup for TV shows and at Parliament.”

Kampala Metropolitan Police spokesperson Patrick Onyango says the police do not poison people and confirmed the poison fear has reached police stations. Visitors who bring food to anyone in police custody must taste it first, in case it’s poisoned, he says. Poison allegations are investigated if police receive a report and the alleged victim has medical records that validate the allegations, he adds.

“The parliamentary canteen collapsed. They used to serve drinks, food, beer, but these days you can hardly find anyone there. People are afraid of poisoning.”Wilfred Niwagabaindependent member of Parliament for Ndorwa East

For former principal Bruce, having to take his own food and drink everywhere while at work for fear that he would be poisoned was too much.

“I was hesitant to take it,” he recalled of the time a staff member gave him a carton of juice. “Finally, when I decided to take it, I found it was leaking. A small hole had been pierced in a corner of the juice pack. I got suspicious and took it to my car and then threw it out of the window.”

On another occasion he says he accepted chicken wings and fries from a staff member but refused to eat the offering and disposed of it at home. “I threw the contents in the compost pit,” Bruce says. “The following day I found the packet ravaged by my dog, but he was dead.”

Nambooze, who says two more attempts have been made to poison her, confirmed the poison scare has reached far and wide.

“The business community are afraid to eat in public spaces. People even fear to take Holy Communion in churches, believing they can be targeted and poisoned in church,” she says. 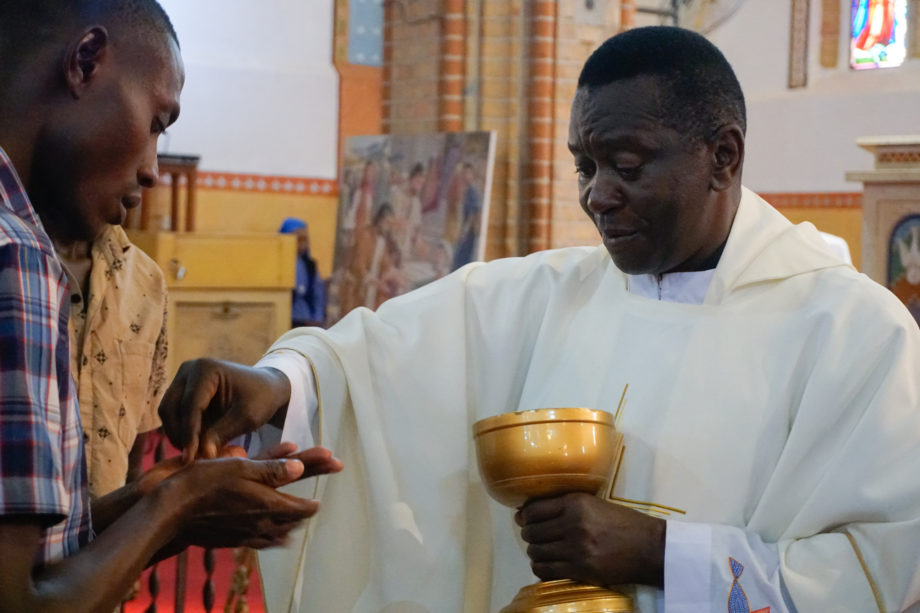 The Rev. Anthony Musaala, giving Communion in Saint Mary’s Cathedral Rubaga, part of the Roman Catholic Archdiocese of Kampala, says people should be careful but not hysterical.

The Rev. Anthony Musaala, who presides over the Sacred Heart Parish at Lubaga Cathedral in the capital, says people should be careful whom they deal with but not hysterical.

Nambooze says the government must restore Ugandans’ trust by conducting investigations into the cause of death of people in positions of power who were rumored to have been poisoned.

“I moved a motion in Parliament that they do inquests on deaths of prominent people,” says Nambooze, who is yet to hear of any progress on this motion.

For Bruce, he never wants to enter a position of power again and is happy in his work as a teacher.

“I am glad I decided to leave my job of headship,” he says, after working in education for 18 years. “I can now mingle with others and concentrate on my work, without worries of being killed.”