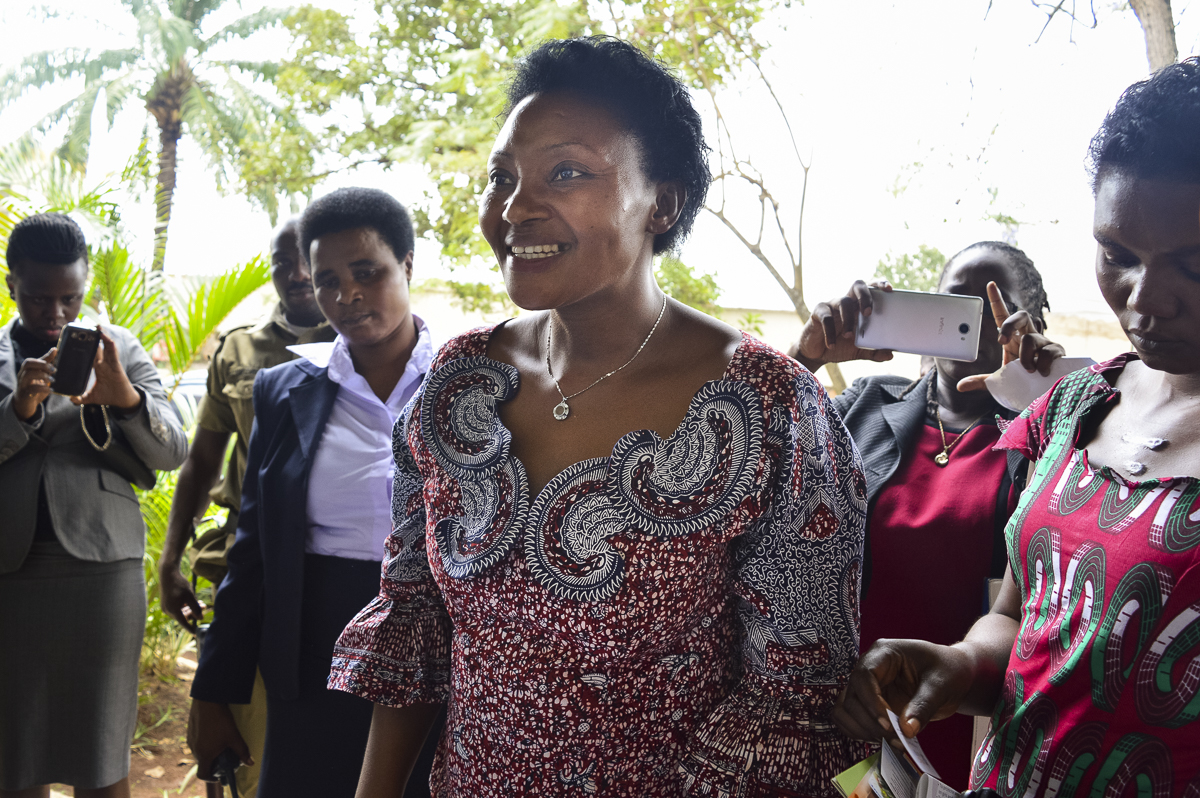 KAMPALA, UGANDA — As the opposition leader in Uganda’s parliament, Winnie Kiiza will likely face intimidation from the ruling party.

Kiiza is new to the job—she was nominated to the leadership post in May 2016 by her party, Forum for Democratic Change—and she’s the only woman to have ever held it. In Uganda’s hostile political scene, her gender could become a liability as she seeks to influence an administration that has been in power for decades. Or, her advocates say, she could inspire more women to engage in politics.

Maggie Anena, a lawyer, hopes Kiiza’s position will inspire other women to aspire for high-level roles in politics.

“Her making it to the leadership position that has always been dominated by men encourages women with high power political ambitions that it’s possible to reach far in politics,” Anena says.

Kiiza emerged on Uganda’s political scene 15 years ago as a representative from Kasese district. Now, she faces the tough task of marshalling the opposition against an overwhelming ruling party majority. Opposition politicians and activists face arbitrary arrest, intimidation, threats and politically-motivated criminal charges for expressing views deemed critical of the authorities.

At the time Kiiza was appointed as the opposition leader, her predecessor, Kizza Besigye, was in prison on treason charges.

“Her constituency overwhelmingly voted for the opposition presidential candidate at all levels of leadership from local government leaders to members of parliament, and she significantly contributed to that with her social, political mobilization ability,” Mafabi says.

Kiiza spoke with Global Press Journal about how she plans to steer the opposition ship for the next five years.

What do you hope to achieve as the new opposition leader?

The ruling National Resistance Movement party has an overwhelming majority in parliament. How do you plan to keep the government in check despite the disadvantage in numbers?

Keeping the government in check isn’t about the ruling majority. It’s about voicing out the people’s needs. Ugandans have needs. It’s our role as members of parliament, whether in opposition or the ruling party, to address these needs because the people we represent have similar challenges. Yes, the ruling party has majority members, but the numbers have nothing to do with influencing what the population wants.

My role as the opposition leader is to ensure that the government fulfils its responsibilities to the people of Uganda, to keep the government in check and ensure that it delivers services to people’s expectations. These services include a sound health care system, right to information, equality, fundamental human rights and better education. My role is to also criticise the government where it goes wrong, like cases of police brutality, violation of human rights and corruption.Winnie Kiiza, opposition leader

What challenges do you anticipate as the opposition leader?

As members of opposition, many people see us as enemies of the government, which isn’t the case. This is a challenge because sometimes you are not given the audience you are supposed to get, because all they will see is that you are fighting against the government. Yet you are only critiquing and citing the wrongs and suggesting solutions for the good of the country.

Do you plan to push for the restoration of presidential term limits to break NRM’s dominance in Uganda’s politics?

That’s one of the opposition’s top agenda issues. The government should come up with a comprehensive plan to restore the presidential term limits. This is an issue that does cut across all political parties in Uganda. Some members of the ruling NRM party are not comfortable with the current law.

Fortunately, (the) majority of the (members of parliament) who passed the removal of the presidential term limits are out of parliament. Restoration of term limits is very vital for the current and future political, social and economic sanity of this country.

There is a proposal by one parliamentarian to remove the presidential age limit, which will allow President Museveni to stand again in the 2021 general election. How have you tackled this proposal?

I rejected it the moment it was tabled in parliament. Removal of the presidential age limit will not be in the interest of the people of Uganda. There are other Ugandans out there who aspire to be president. If the constitution is amended again to fit the interests of one individual, it will be a selfish act that might take the country back to its dark past.

Your predecessor, Kizza Besigye, was known for his confrontational style of politics. Do you plan to use the same approach?

I may not be as confrontational as Kizza Besigye, but I am inclined to inform the public on what’s going on and inspire them more. Besigye, through his confrontational approach, showed Ugandans that change can be achieved, and that is a milestone.

What hurdles have you faced in politics since you joined parliament in 2001?

Being seen as a government enemy is one challenge. Every time, I have to explain to people that I am not a government enemy but a friend, especially when I talk about issues like corruption, excessive government expenditure and the overwhelming number of members of parliament. The amount of money the government spends on (members of parliament) is too high, and when I talk about such issues, people, especially those of the ruling party, regard me as an enemy, and my suggestions have never been taken seriously. But I still continue to talk.

Another challenge is the general perception that Uganda is a democracy, which is not the case because you have one leader who has overstayed in power, influencing almost every decision made in the country. This, most times, frustrates my ambitions as a legislator.

Male parliamentarians are perceived to perform better than their female counterparts. Where does this perception come from?

The other reason why women are considered to perform worse than men is because men are project-oriented in service delivery, while women are individual-oriented. In our political environment, the population will expect a woman (parliamentarian) to act like a mother and cater for the population at an individual level. She is expected to pay someone’s child’s school fees or pay for someone’s hospital bills, which might not be expected of the male (parliamentarians).

Are you aspiring to run for president in the next elections?

I have all the qualifications to be president. I have the right education level, I am over 35 years. I am Ugandan, with the right to participate. It’s time Ugandans started looking towards having a woman president.