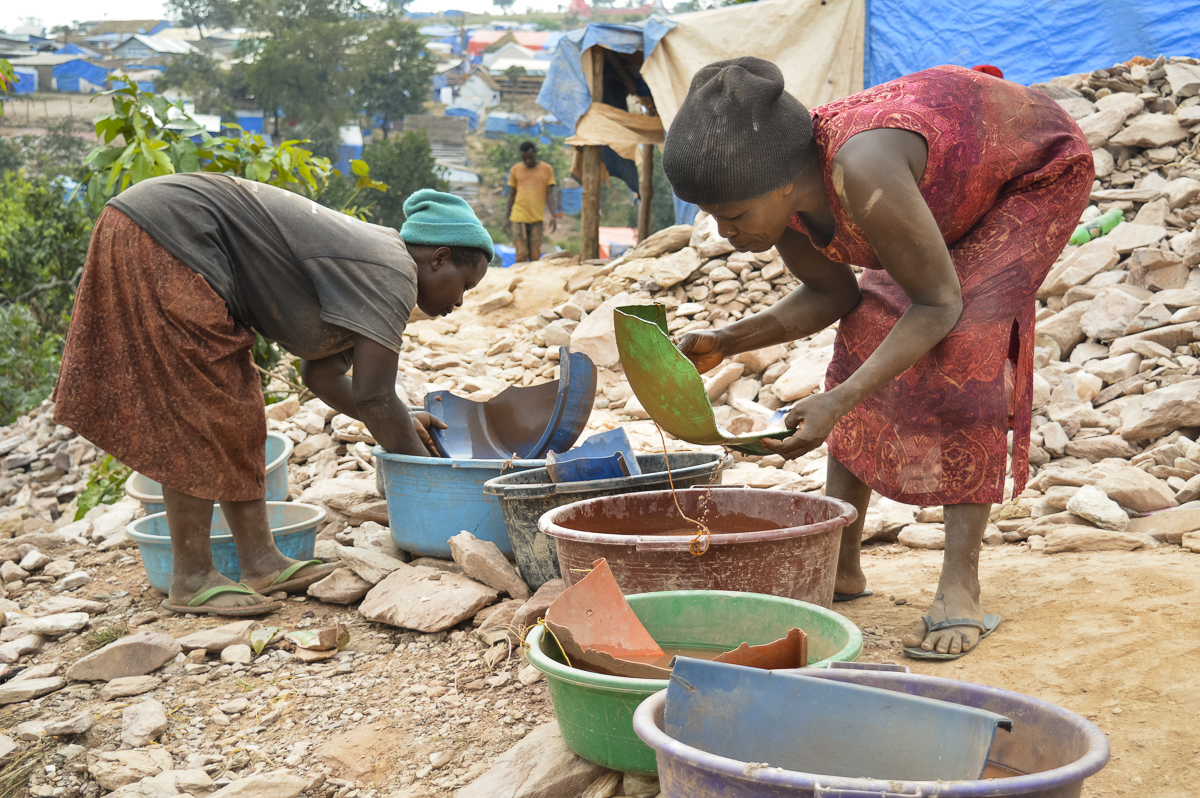 MUBENDE DISTRICT, UGANDA— Jennifer Mpumwire’s 14-year-old son, Keith, worked with her at the Luggingi I gold mine in Mubende district until July, when there was a police raid.

The police were looking for children who were working, and they found Keith.

The Luggingi I mine is informal. In the industry, it’s called “artisanal,” meaning that the people who work there aren’t employees of a mining company. Safety measures are often unregulated in the artisanal mining sector, and workers earn money only when they find the minerals they seek.

Before the raid, many parents, like Mpumwire, brought children with them.

The boy was helpful, Mpumwire says.

“My son could come and help me to wash dust mixed with water in a basin so to trace gold in lumps of rock and soil excavated from underground,” she says.

Together, they earned a living. But since the police raid, Mpumwire says, she works on her own and doesn’t earn enough money.

The raid was the second one at the Luggingi I mine, says Nobert Ochom, public relations officer for the police department in Mubende district’s Wamala region. The first one happened in October 2015, he says, but the children who scattered then came back.

Two men were arrested in the second raid for employing children, Ochom says. They’ve been tried in court, but Ochom could not confirm the outcome of their cases or provide any documentation of their arrests.

I saw two underage children, about 14 years, selling themselves to miners. Jennifer Mpumwire, who worries about child prostitution at mine sites

Ochom declined to say how many children were found working in the mine at the time of either raid.

The raids are part of a larger community awareness effort, Ochom says.

“In July we did community policing in the gold mines and encouraged parents to stop their children from working in the mines, but instead send them to school, even those that say (they) have no money, because child labor in Uganda is illegal,” Ochom says.

It’s illegal for children under the age of 12 to work in Uganda, according to the country’s 2006 Employment Act. Children ages 12 to 14 can engage in light work, under adult supervision, during daytime hours after school. Government officials can formally prohibit children from working, even in those circumstances, if they do so in writing.

Uganda’s Children Act states that children should not take part in employment or activities that endanger their health, education or development. People who do not follow those guidelines are subject to a fine and up to six months in prison.

Those laws don’t adequately regulate artisanal mining operations, one Ministry of Energy and Mineral Development official told GPJ on condition that his name not be published, because he is not authorized to speak with the media on the issue. The government is revising the 2003 Mining Act, and those revisions could include specific regulations on artisanal mining, which is the sector in which many children involved in the industry work.

Local police, regional government officials, the Ministry of Energy and Mineral Development and the Ministry of Labour, Gender and Social Development are all responsible for ensuring that children do not engage in mining, but some people in those roles benefit from child labor, so little is done to curb it, the official says.

There’s no plan to shut down artisanal mines, because the people who work legally in them rely on that income, the official says.

In absence of consistent regulation, many Ugandan children work in the country’s gold rush zone. Some parents even require that their children do so.

I now have to work thrice as much as I used to before the raids. I carry heavy loads of basins filled with dust before and after washing the dust. I now feel fatigue on my shoulders and the neck. Enid Kwalikunda, a widow, whose two children, ages 13 and 17, were forced out of the gold mine by police raids

When researchers from the Netherlands-based Centre for Research on Multinational Corporations (SOMO)visited artisanal mines in Mubende district, they found that 70 to 80 percent of the people working in the area where the gold is washed were children. Most of those children told researchers that they worked five or six days per week during school breaks, and after classes and on weekends during the school year.

As many as 30 percent of the 50,000 or more artisanal gold miners in Uganda are children, according to that April 2016 SOMO report. Artisanal miners in the country produce as much as 2.8 tons of gold per year.

Mining, especially using the rudimentary methods common at artisanal mines, is dangerous work. Dust and pollution can cause coughing, respiratory diseases and headaches, according to the United Nations Environment Programme. Open wounds are common among people who work at mines, and those wounds are easily infected.

Often, children use mercury to “wash” the gold found in the mine, SOMO found. When on-site buyers examine the amalgams produced in the “washing” process, they often burn the mercury away, as children, who don’t wear any protective gear, stand nearby.

Many of Uganda’s industrial gold mines closed in the 1970s due to political instability. Now, most gold mining in Uganda is artisanal or otherwise small-scale. Much of the gold trade from Uganda is illegal, according to the intergovernmental Organisation for Economic Co-Operation and Development (OECD).

The Ugandan government estimates that more than 90 percent of the country’s minerals are produced via artisanal and small-scale efforts.

Some miners say the work sites are too dangerous for children.

“Children should never be again allowed to work in the mines, because they are likely to face occupational and health hazards while in the mines,” says Moses Kiwanuka, a miner at the Luggingi I site. “The mines are characterized with several open pits which could cause accidents for the children.”

And there are other health risks, he says. There are just four toilets available, and people are charged 500 shillings per visit. That means most people relieve themselves in nearby bushes, he says. Children could easily contract diseases due to the unsanitary conditions, he says.

But for many parents, police raids result in frustration and deep poverty.

Enid Kwalikunda, a widow, says the raids forced her two children, ages 13 and 17, out of the gold mine and ultimately resulted in more work for her.

“I now have to work thrice as much as I used to before the raids,” she says. “I carry heavy loads of basins filled with dust before and after washing the dust. I now feel fatigue on my shoulders and the neck.”

Children should be allowed to work in mines during weekends and school holidays, she says, so they can help their families.

Since the raid, both of her children attend school, she says. Before it happened, only the younger one did. The older child dropped out when he was 15, to work at the mine, she says.

Prostitution is a problem at the Luggingi I mine, she says.

“I saw two underage children, about 14 years, selling themselves to miners,” Mpumwire says.

The gold mines, she says, are a sure bet.

Women aren’t allowed inside to dig for gold, so their earning potential is limited to what they can produce by washing soil to separate the gold. But young men can enter the cave when they reach the age of 18, she says. If they find gold, they can earn a lot of money.

Some miners say they can go months without finding any gold. But the promise of a big find and a 10 million-shilling ($2,950) payoff keeps them coming back.

That’s enough to lure parents to bring their children to work with them.

And when children are kept away from the mine, parents say the impact is immediate.

“Now I do all the work, which is very tiring,” Mpumwire says. “[It] affects my income earning because I now wash less lumps to get gold.”

Some of the interviews were done in Luganda.