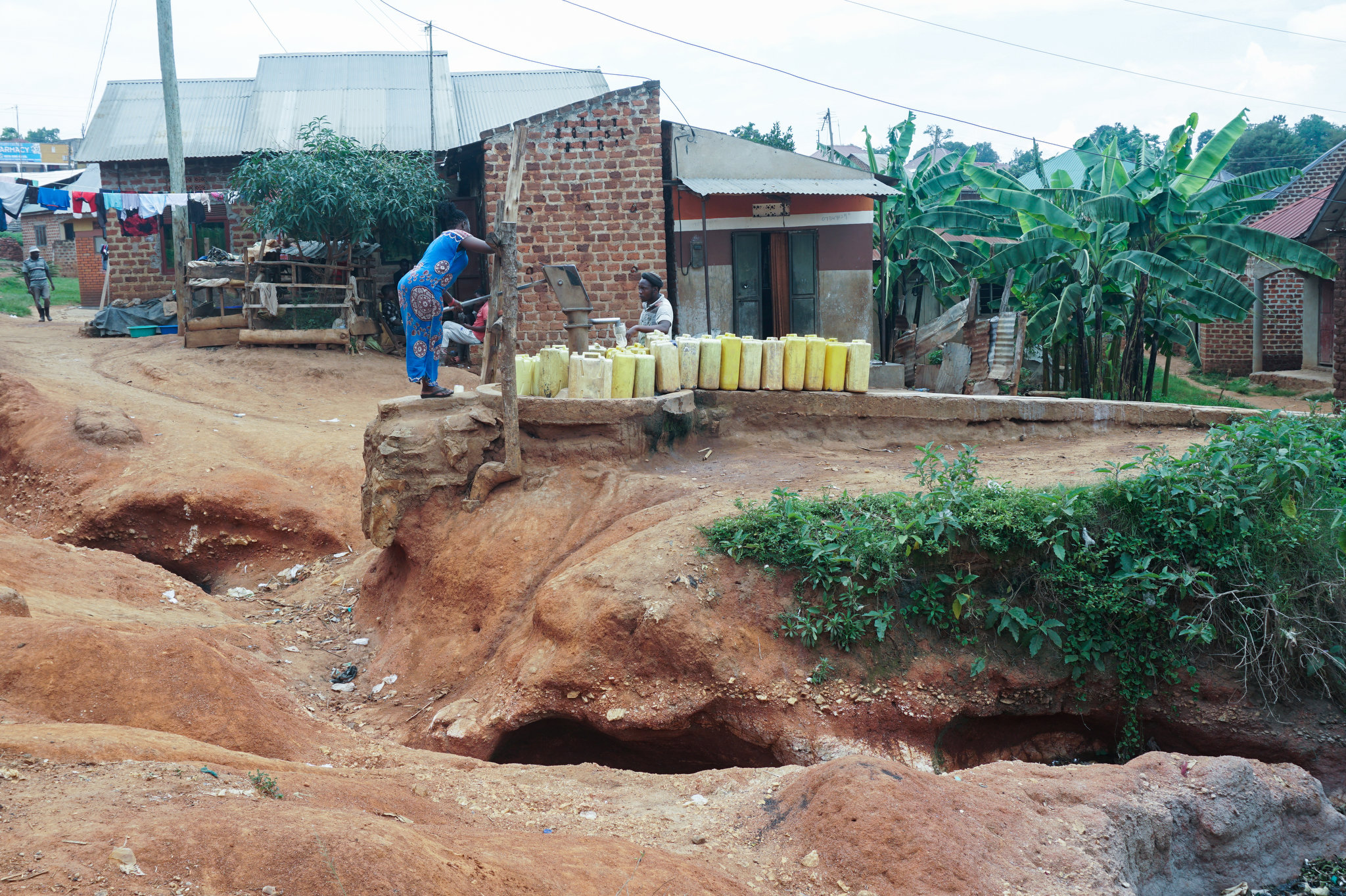 MUKONO, UGANDA — Getting a drink of water in Kalagi requires courage and caution.

Since 2017, erosion has collapsed its 20-year-old borehole, a hand-pump well that serves as the only source of drinking water for 3,000 people in this central Ugandan village. To access it today, residents wade through a muddy trench filled with fruit peels and empty plastic bottles. Their reward? A bucket of liquid that is murky, rather than clear.

The next nearest borehole is 10 kilometers (6 miles) away — and doesn’t work, either.

“It has now become a matter of life and death,” says Nalule Pauline Mary, a lifelong resident. “Two children have died.”

A community advocate with the Initiative for Social and Economic Rights, a national nonprofit human rights organization, Nalule has made it her mission to restore Kalagi’s clean water. Walking door to door between August and November, she collected more than 1,200 signatures calling on the local government to fix this borehole — if not all of them.

Uganda has more than 37,000 boreholes. Each takes three to five days to drill and is supposed to last at least 20 years when properly maintained. More than one-third of Ugandans overall — close to half in rural areas — rely on boreholes for water, according to the most recent household survey conducted by the national statistics office in 2016. One-third of those had experienced service interruptions in the past two weeks. 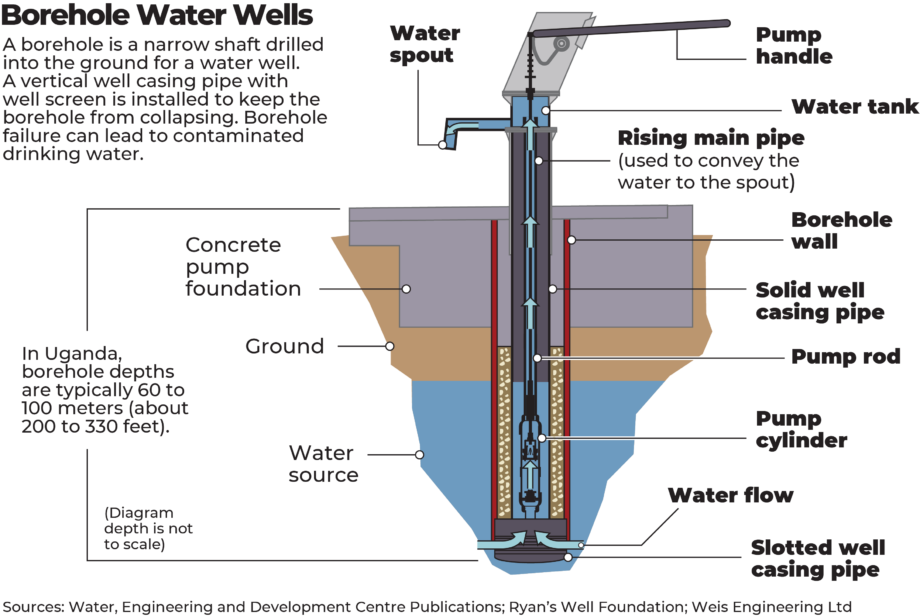 When boreholes fail, those who rely on them have four choices: walk for hours to a functioning borehole; pay up to 1,000 Ugandan shillings (28 cents) for a 20-liter can of water; keep pumping in hopes of surfacing cleaner water; or take the brown water home and wait for some of the dirt to sink to the bottom of the bucket.

Communities sometimes resort to unsafe solutions, risking preventable deaths from typhoid, diarrhea and drowning. “I have asked my local leaders and the district chairman to fix the borehole but to no avail,” Nalule says. “Maybe if they see that my community is backing me, they will take me seriously.”

But households that should be the strongest supporters of this initiative have been the most reluctant to come forward, she says, fearing they would be blamed for their borehole-related tragedies.

Neighbors say a 4-year-old boy slipped and drowned while trying to access the Kalagi borehole in 2019; his parents fled after the incident, fearing prosecution for negligence. The following year, a 7-year-old girl washed away while trying to fetch water on a rainy day. Her father, who requested anonymity for fear of stigmatizing his family, says even her accidental drowning didn’t lead to any improvements at the borehole.

“People fall around there all the time, going to or leaving the borehole,” he says. “Others are scared to go there even in its current situation, but what can we do? It’s the nearest and most affordable water source.”

Of the 431 boreholes in Mukono district, where Kalagi is located, more than 40% were not functioning properly in late 2021. The local government repaired 31 boreholes between July and November; no new ones have been drilled.

“The budget is strained, and we may unfortunately not get to most of them this year, but we undertake minor repairs,” says James Nkata, the district chief administrative officer. 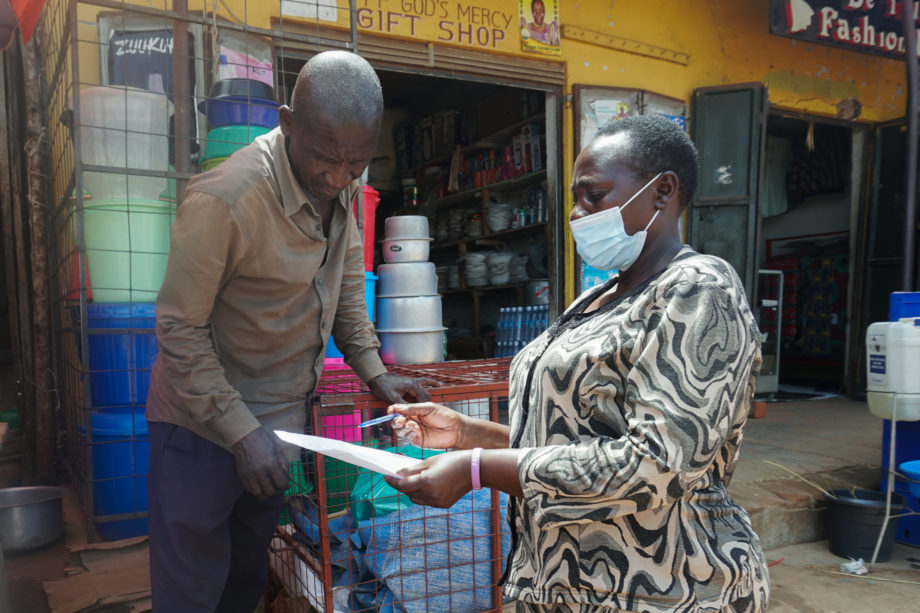 Nalule Pauline Mary gets a signature from her neighbor, Kizza John Paul, to petition local leaders to prioritize their borehole’s repair.

Citizens can raise their complaints with the local government, which can then either respond or raise the issue at the national level. Without any response at either level, residents have the option of filing a civil suit, but that’s too costly for many Ugandans.

In nearby Wakiso district, Junior Kirunda must walk at least 3 kilometers (around 2 miles) every other day to fetch water from a pond because his neighborhood’s borehole has been broken for more than two years. His family, including two children younger than 5, needs at least 30 liters of water a day.

“Most days I try to be the first at the pond because later in the day, the water becomes dirty from overuse,” he says. “Children play in it; others wash their clothes here, even animals drink from it.”

Kalagi and Wakiso are just two among thousands of communities whose boreholes need to be either repaired or decommissioned. In March 2020, Alfred Okot Okidi, the permanent secretary at the Ministry of Water and Environment, directed chief administrative officers across Uganda to ensure access to drinking water.

According to Uganda’s 2020 Water and Environment Sector Performance Report, obstacles include technical issues during construction and the need for trained engineers. Another is the cost; Kalule James, the Mukono district water engineer, says his district budgets 450 million shillings every year ($126,000) for water supply, which must cover the cost of pipes and other related infrastructure, not just boreholes.

“The money is not enough to rehabilitate all boreholes in a given financial year,” Kalule says. “We would want to do more, but it’s not possible.” 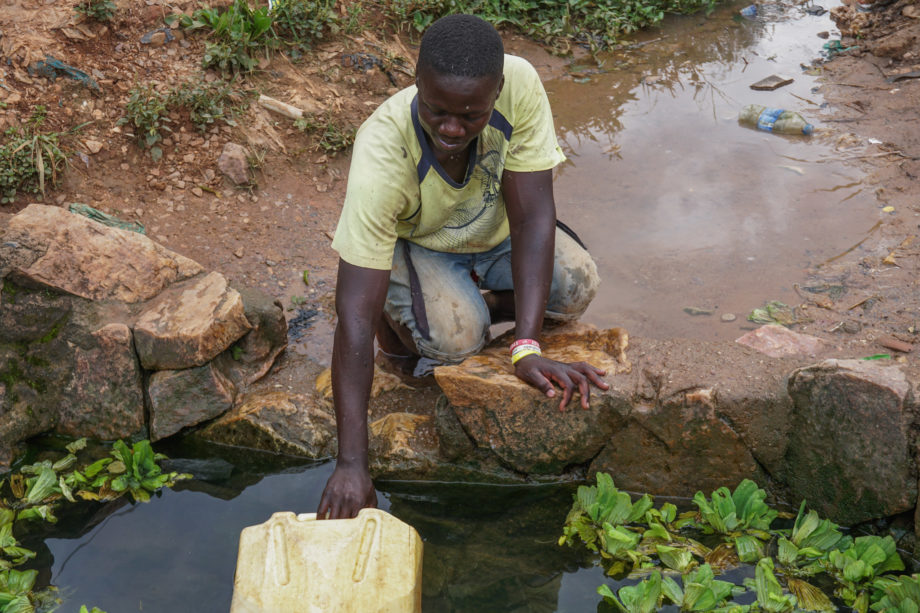 Junior Kirunda fetches water from a pond in Wakiso. He walks more than 3 kilometers (about 2 miles) to the pond because it's the closest and most reliable water source.

Through volunteer-based community efforts, when a borehole needs repairs, local households are supposed to chip in at least 500 shillings (14 cents) each. Kirunda says he contributed two years ago, the last time the borehole broke. The repair didn’t work.

But Erisa Kyeyune, a senior water officer at the Ministry of Water and Environment, says it has been difficult to convince people to pay a fee to privately maintain the boreholes, which they view as the government’s responsibility.

“We are looking at new models whereby communities are backed by either a grant or nongovernment organization,” Kyeyune says, adding that the ministry has also begun working with Whave, a private company, to provide maintenance service on boreholes.

“We are probably on a long list of people that are waiting on borehole rehabilitation,” she says. “But I pray the signatures show how urgent ours is.”