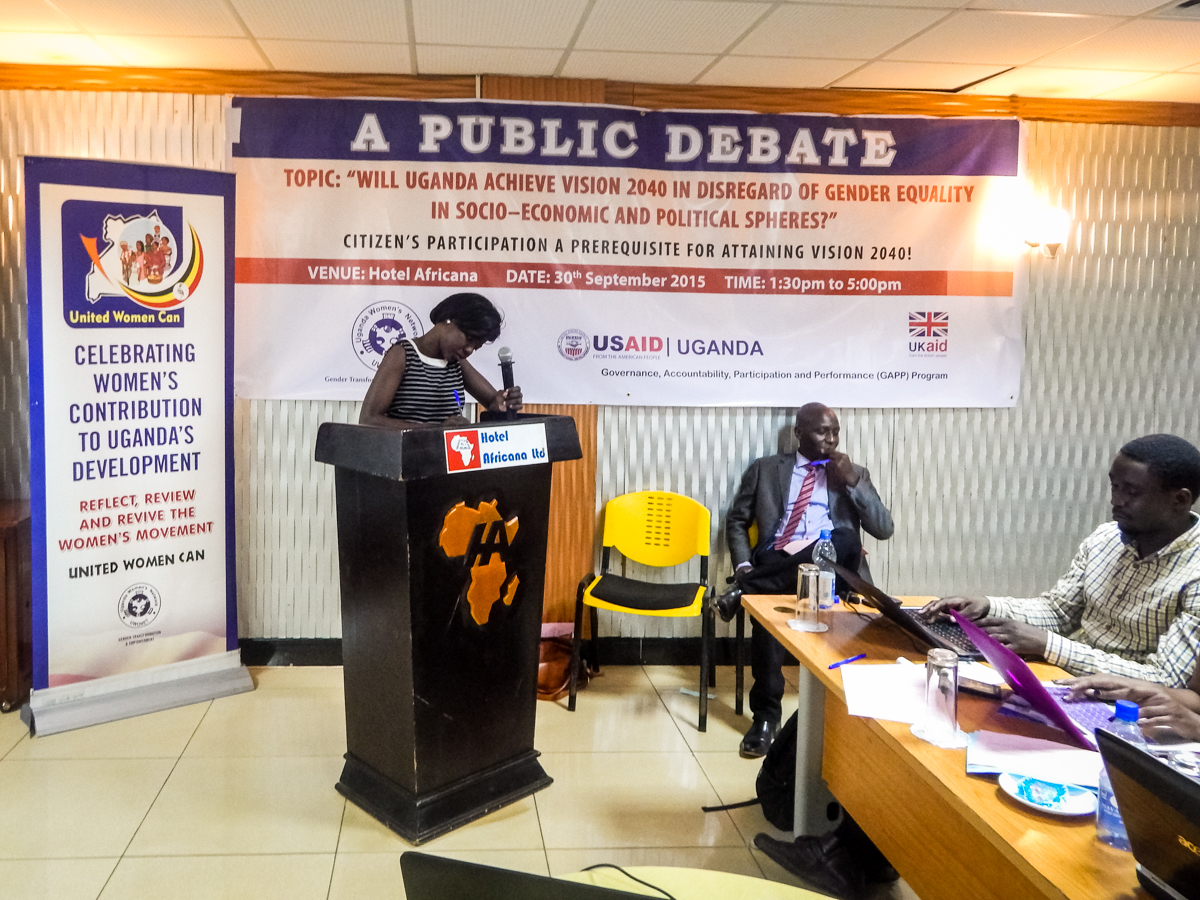 KAMPALA, UGANDA — Fiona Nabwire, 37, a mother of three and resident of the Kampala suburb of Namuwongo, says she won’t worry about buying childbirth supplies if she gets pregnant again.

“When I first had my firstborn, Diana, in 2005, I was asked by the nurses to bring a kit, and I did not have money, so I borrowed money to buy one,” Nabwire says.

But when she gave birth to her daughter Juliana in 2013, she says, she was given a free “mama kit,” which included all the supplies needed by a clinic or hospital staff to deliver her baby.

“She was a gift from God,” Nabwire says, holding a cup for Juliana as the girl sips from it.

Nabwire says she’s aware that female parliamentarians made it possible for her and all pregnant Ugandan women to get free mama kits. If more women were in government, she says, ordinary folks would live better lives.

The Women in Democracy Group, led by the Uganda Women’s Network (known as UWONET), plans to ensure that that happens. It submitted a proposal, backed by more than 2,000 signatures, to Uganda’s Committee on Legal and Parliamentary Affairs that would require each district to be represented in Parliament by equal numbers of men and women – one each per district. The proposal would reduce the total number of parliamentarians.

It has motivated women to stand.Susan Labwot, program coordinator for Women’s Leadership and Democratic Governance at UWONET

The proposal hasn’t been considered by lawmakers yet – Parliament ran out of time when it reviewed proposals in August – but UWONET intends to submit it again next year, says Rita Aciro, UWONET’s executive director.

If approved, the change could significantly affect the makeup of Uganda’s Parliament, potentially ousting some parliamentarians from their seats to make way for more women.

The change would also build on the increase in the number of women Uganda has elected to Parliament since 1989, when the country enacted an affirmative-action policy requiring that each district have a female representative. In 1989, women held 16 percent of parliamentary seats, according to a 2014 UWONET report that has not been released to the public. By 2011, that study found, women held 34.8 percent of the seats.

Now, of the Ugandan Parliament’s 375 members who represent constituencies or special-interest groups, 112 seats are set aside for women. Rebecca Kadaga has been the speaker of the Parliament since 2011 and is the first woman to hold the position.

The increasing number of women has changed the culture in Ugandan government, says Susan Labwot, program coordinator for Women’s Leadership and Democratic Governance at UWONET. Parliament is no longer seen as a man’s realm, she says.

“It has motivated women to stand,” Labwot says.

The Women in Democracy Group’s proposal would help more women run for political office. If the new guidelines are approved, candidates would not be forced to resign their current jobs before they seek elective office.

“The women who ought to be competing for such offices are teachers (and) nurses who are afraid to join politics for fear of losing their jobs,” Labwot says.

But once elected, women often are effective at influencing policy decisions, says Mondo Kyateka, assistant commissioner for youth affairs in the Ministry of Gender, Labor and Social Development.

“When we talk about maternal healthcare or child-rearing, when a woman is articulating issues about women, they do so with a passion,” Kyateka says.

That passion has translated into legislation, says Rosemary Nyakikongoro, a parliamentarian from Sheema District and former vice chairwoman for the Uganda Women Parliamentary Association (known as UWOPA). UWOPA, to which all female parliamentarians belong, has at least one representative on each governmental committee to ensure that all legislation being discussed addresses gender issues, she says.

The women representatives in Parliament also successfully requested that a third of committee chairpersons be women, Nyakikongoro says.

The results are clear, she says. For example, the Public Finance Management Act, enacted in 2015, says every accounting officer must ensure that their budgets consider gender equity. This law was championed by female parliamentarians, Nyakikongoro says.

It has motivated women to stand.Susan Labwot, program coordinator for Women’s Leadership and Democratic Governance at UWONET

UWOPA supported the Domestic Violence Act 2010, which created a legal framework through which domestic-violence victims can seek justice.

When women representatives advocated to increase the health budget in 2012, the result was that all of Uganda’s public health facilities could provide free mama kits to mothers who came to deliver babies. The kits include plastic sheeting, razor blades, gauze pads, soap, gloves, cord ties and a child health card. Before the change, women were required to bring their own kits, and some could not afford to.

Women parliamentarians also ensured that men and women were compensated when they were displaced from their homes to make room for an oil operation, Nyakikongoro says.

“The women members of Parliament have obviously been instrumental when tabling important legislation that affects them,” says Cornelius Magara, the principal women’s development officer at the Ministry of Gender, Labor and Social Development.

Legislation spearheaded by women has also included laws supporting victims of domestic violence, the Prohibition of Female Genital Mutilation Act 2010 and the Prevention of Trafficking in Persons Act 2009, which prohibited human trafficking and provided protection for trafficking victims.

Magara says his department focuses on effective female representation, not just an increase in their numbers. He also notes that his gender does not disqualify him from leading the department.

Despite their successes, one watchdog group found that women in Parliament performed worse than their male counterparts.

The Parliamentary Scorecard 2009-2010, a watchdog initiative of the Africa Leadership Institute, in January 2011 reported that women did not participate as much as men during plenary sessions and in committees. Women performed worse than men across most of the measures. The group noted that its results may reflect structural bias in Parliament.

And while women have received some benefits, they’re not enjoying a boost in socioeconomic welfare, Labwot says.

“Maternal welfare (and) education are not prioritized by the state,” she says.

With men holding a majority in Parliament, it can be difficult to push through legislation that directly affects women, Labwot says.

The Marriage and Divorce Bill in 2013 was not supported by Parliament’s male members, in part because it would have given divorcing women shares of property acquired during their marriages, Nyakikongoro says. Some men also felt the bill would make divorce easier and more acceptable. That proposed bill was shelved.

Men aren’t the only opponents to some legislation that would benefit women. Some female parliamentarians say they didn’t campaign to serve women, Nyakikongoro says.

“Some women in offices don’t want the Domestic Violence Act or the Marriage and Divorce Bill because they can do it themselves,” he says.

Women’s representation in one-third of Parliament is not enough, Magara says, as women still suffer marginalization. There are too few women in leadership at every level, he says.

Too many women can’t run for office because they’re not academically qualified, he says. With some guidance, he says, women could still win.

“If well-mobilized and given tips, they can beat male members in elections,” he says.

But women who are already in office should compete directly with men, he says, leaving the positions reserved for women for new candidates.

However women get into office, some say their presence in government will improve the lives of all Ugandans.

“You know women – we are mothers, and we care for all,” says Nabwire, the mother who benefited from a free mama kit. “When a woman makes a decision, she makes it as mother of all.”