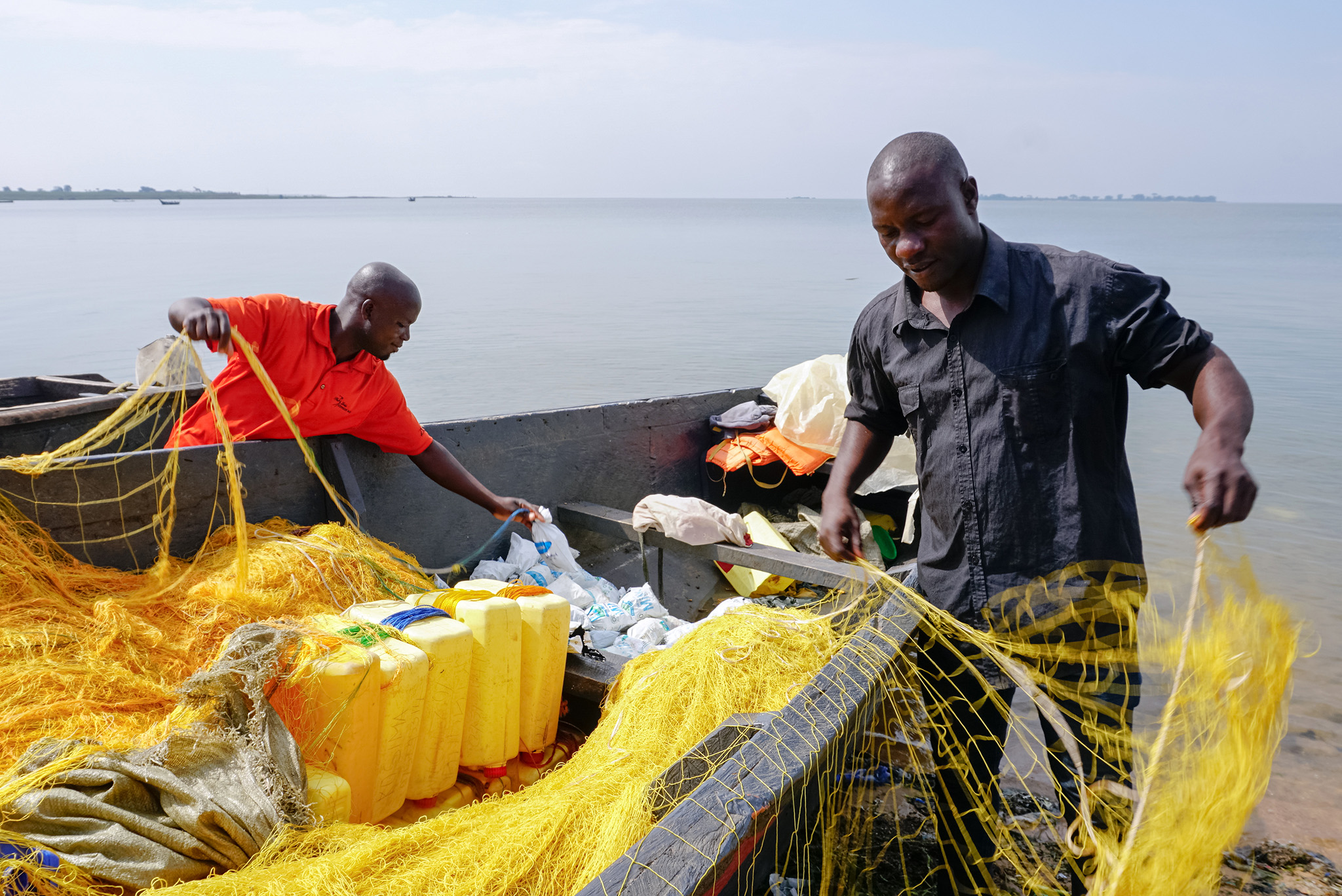 KAMPALA, UGANDA –Kisitu Godfreywas 20 years old in 2006 when he started fishing alongside his father in a boat on Lake Victoria, a popular Ugandan locale known for its plentiful stocks of Nile perch.
He bought a boat of his own in 2014, and both he and his father hauled 50 to 80 kilograms (110 to 176 pounds) of fish each day. Earning 10,000 Ugandan shillings ($2.71) per kilogram, Kisitu says they were able to provide a comfortable living for their family.

“The situation got worse in 2016. Sometimes I would make no catch at all and would return with empty boats or very little fish, like 10 kilograms (22 pounds) a day,” Kisitu says, adding that the price of Nile perch also rose to 15,000 shillings ($4.06) per kilogram. 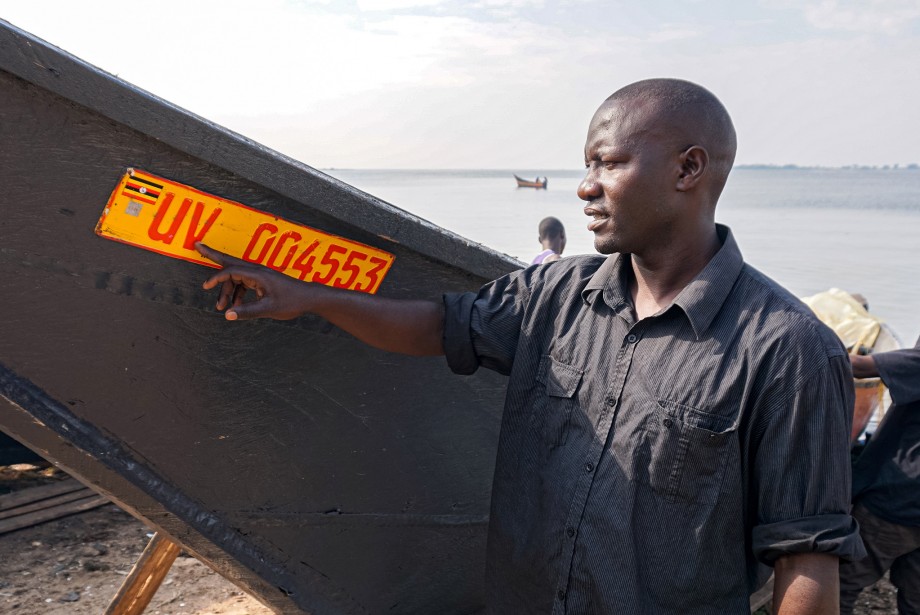 Kisitu Godfrey, a local fisherman, shows off one of his prized fishing boats. He says the military boats patrolling Uganda’s water ways are working to combat illegal fishing that has been depleting fish stocks.

As the chorus of objections around this illegal activity grew, industry advocates sought a remedy.

“We asked for the government’s intervention,” saysKambugu Senyonga Godfrey,the chairman of the Association of Fishers and Lake Users of Uganda (AFALU). “In 2017, President Yoweri Museveni deployed the national army to combat illegal fishing on Uganda’s major lakes.”

For a while, that high-powered support seemed to work. Fish stocks in Ugandan lakes increased, prices of fish at the local market dropped and fishing exports went up.

But some fishermen complain that the militarization of Uganda’s lakes has turned into a nightmare, resulting in the loss of their boats, destruction of their fishing nets and, some claim, injuries and loss of life.

Government officials say those complaints come primarily from people who were not abiding by the laws. Nets with mesh of at least 7 inches are legal to use when fishing for Nile perch, while the legal minimum size of fish net mesh for tilapia is 5 inches. But people involved in illegal fishing used nets that had mesh of just 3 inches for both tilapia and Nile perch, capturing more immature fish and affecting overall fish stocks.

Lutaaya Hamzaadmits to fishing illegally on Lake Victoria and at other sites. He says the daily boat patrols at landing sites and in the middle of the lake wound up pushing him out of the fishing business.

Lutaaya says that his boat and fish nets were destroyed by soldiers who found them hidden nearby. He says he could not afford the legal 7-inch fish slot net used to catch perch, or the required 28-foot boat.

“The cost of both a legal boat with a legal fish net costs about 20 million shillings ($5,411), which money I couldn’t raise. So, I would use the illegal 3-inch fish slot net and a smaller boat to catch small tilapia and Nile perch fish, which I would sell to the local market,” he says. 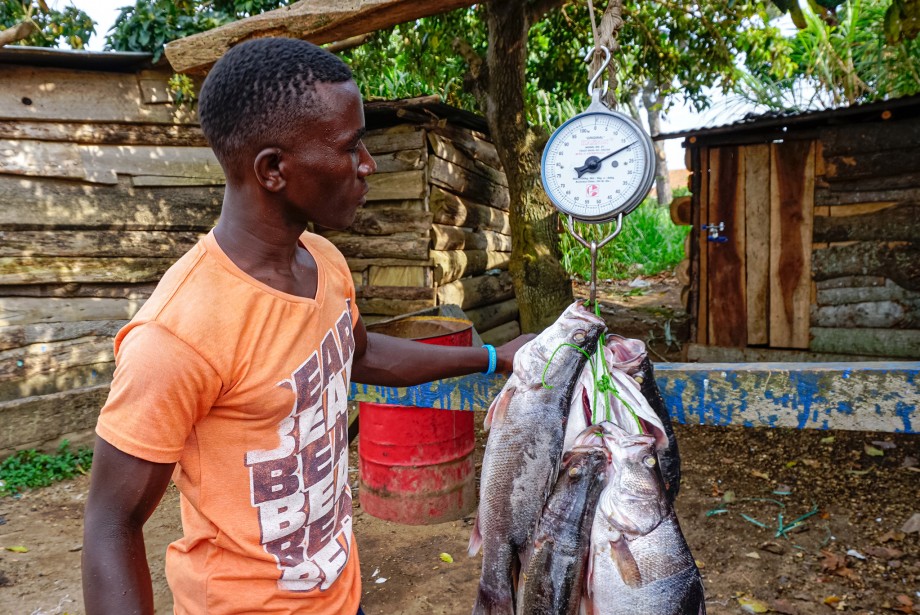 Shafik Bamba, a local fisherman, weighs the Nile perch he has caught at the Kigungu fishing site.

“This was done to protect the lake and stop those involved in illegal fishing,” he says. Nuwagaba says that the army was never responsible for any fisherman’s death.

Today, Lutaaya has stopped fishing illegally and is a seasonal tomato farmer and a boda boda rider. “The fishing business was more lucrative than farming and riding boda boda because I could make about 100,000 [shillings] ($27) in a day, which I can’t make today.”

“Because of illegal fishing, involving the use of illegal fishing nets and boats and overfishing in the lake, stocks of Nile perch and the Nile tilapia, two very commercial fish types in Uganda, went down. This affected the country’s fish export and led to high price of fish on the local market,” Kambugu of the AFALU says.

Ovia Katiti Matovu, chief executive officer of the Uganda Fish Processors and Exporters Association, says that the decrease in Nile perch stocks resulted in the closure of some fish processing and export factories that had no product to sell in the international market.

“In 2005, we had 21 factories that were members of this association. However, by 2016, only six were operating,” Matovu says. But due to increased stocks of fish, he says that currently 11 factories are active association members.

This trend toward improved fish stocks is a mixed blessing for people in the fishing industry.
Bulegeya Didas, a fisherman at Kigungu landing site, says since 2017, when fish stocks in Lake Victoria increased, his income rose.

On the other hand,Kiwanuka Ben,who sells tilapia in Kampala, says the increased number of tilapia have negatively affected his income. 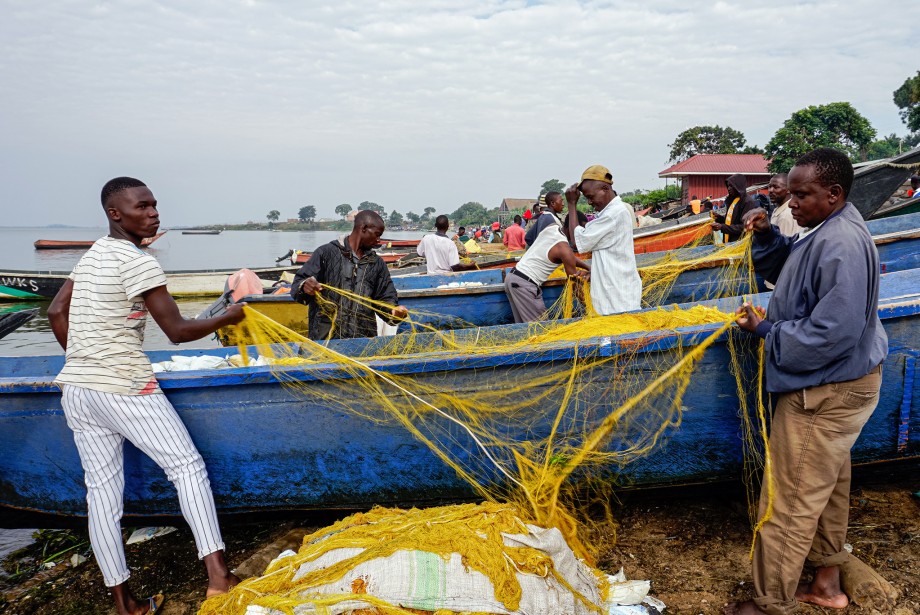 Bukenya Tofa, a local fisherman, prepares his fishing nets for the next nighttime catch at the Kigungu fishing site in Uganda’s Wakiso district.

Regardless of industry problems, consumers seem to accept the new developments.

Namusoke Lydiasays she stopped buying Nile perch in 2016 because a kilo cost about 20,000 shillings ($5.41). Before the price went up, her husband would buy it for the family once a month.

However, Namusoke says tilapia is still expensive because most of the available fish on the market is big, which she can’t afford.

Kisitu, the fisherman, welcomes the increased numbers of fish in Lake Victoria, but he worries they won’t last. He believes the army has relaxed it operations.

“Because this was a response operation, we don’t know how long it will last. We need it to be permanent because I am worried illegal fishermen might be finding their way back into the fishing industry,” he says.

Nuwagaba says the army has not cut back on the patrolling.

“The army is still on the lake and patrolling it,” he says. “There are no illegal fishermen. Where are they? The fish are there in the lake because [the patrolling] has increased.”