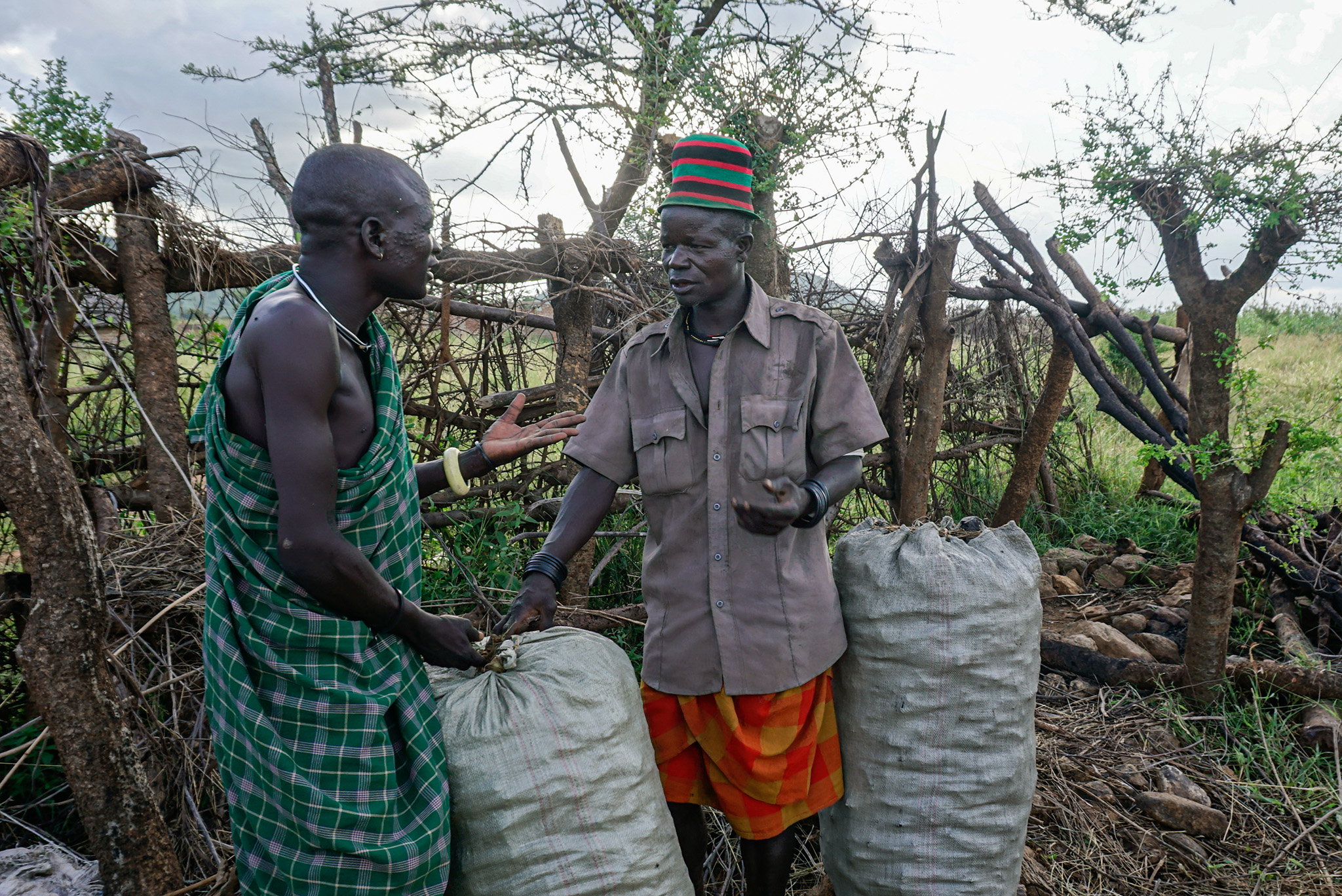 KOTIDO, UGANDA – On one side of Moroto Road in Kalasaliki, young boys are herding cattle, sheep and goats in a field green with flourishing gardens of sorghum and sunflowers. On the other side of the road is Nabulwa Lukunya Market, where Melelena Nakut waits for customers beside sacks of charcoal.

Though charcoal burning for commercial purposes is illegal in Kotido district, one of the seven districts in Uganda’s northeastern Karamoja region, Nakut says this is the only way she can make a living.

“Hunger forced me to get involved into charcoal burning so I could feed my family of 20 people,” she says, describing her extended family that includes the children of her husband’s second wife and all of their grandchildren. Nakut says she started the business in February 2019 because of the prolonged drought in the Karamoja region that resulted in her family being unable to grow sorghum for food.

“The vegetation in Kotido is scanty and the trees are very few. Yet cutting down of trees for commercial charcoal burning is on increase due to high levels of poverty among the people,” he says. 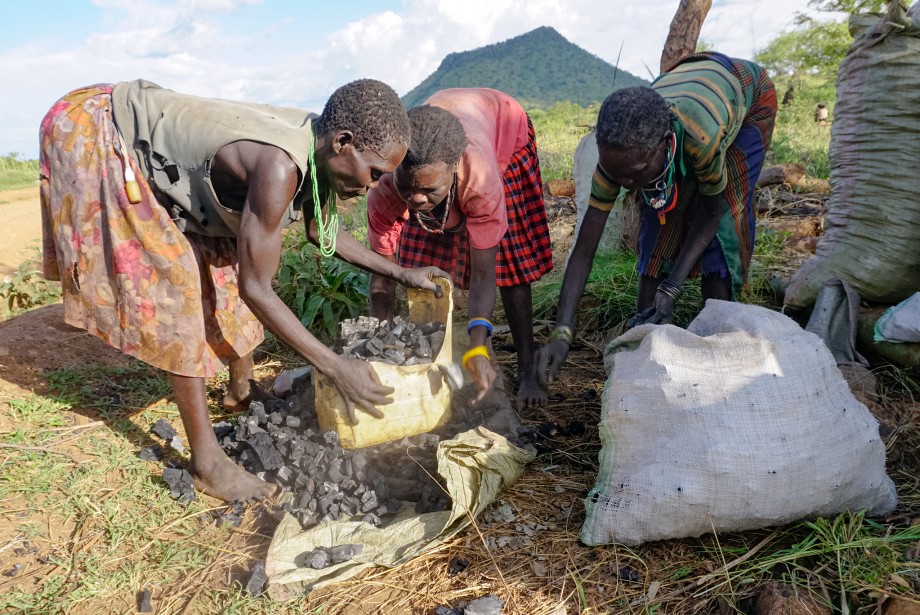 Melelena Nakut (from left), Lonkot Maria and Angom Ann gather pieces of charcoal to bag and sell at a market in Uganda’s Kotido district.

Every month, about 4,000 trees are cut down for charcoal burning in the district, a number he says is too high for an area that experiences an intensely hot season, marked by dust storms, and a rainy season where precipitation is sparse and uneven.

“Kotido entirely depends on natural rainfall. The nature of the soil doesn’t retain water. So when trees are cut down, the soil’s capacity to retain some water is weakened, and this affects agriculture, which normally doesn’t do well here,” Lalal says.

On average, Uganda has been losing 122,000 hectares (301,469 acres) of forests per year since 1990, according to a 2016 report by the National Forestry Authority, a government agency responsible for managing and protecting forests in the country.

The practice of cutting down trees to burn into charcoal was introduced to Kotido in 2009 by businessmen from Mbale, a district in eastern Uganda, says George Oming, a local natural resource officer.

“Burning charcoal in here is so cheap,” he says.

The practice soon spread throughout the region. Most of the charcoal produced is then sold outside the region, Oming added.

Nakut burns trees in her village, then sells a sack of the resulting charcoal for 20,000 Ugandan shillings ($6). She says the buyers tell her that they resell her charcoal in Mbale and Kampala.

In Kampala a sack of charcoal sells for 110,000 shillings ($30), says Babirye Margret, a housewife living in the capital city. The 2016-17 Uganda National Household Survey indicates that over 90% of Ugandan households use solid fuel for cooking, including charcoal.

Oming says the situation has gone beyond his department’s control. Besides profits, Oming points to resettlement as a contributing factor.

“People started resettling in the previously unsettled areas in the early 2000s because of the peace secured after the disarmament programs that ended issues of guns and cattle theft,” Oming says. As people settled in these areas, they started cutting down trees to clear fields for agriculture as well as to burn for charcoal. 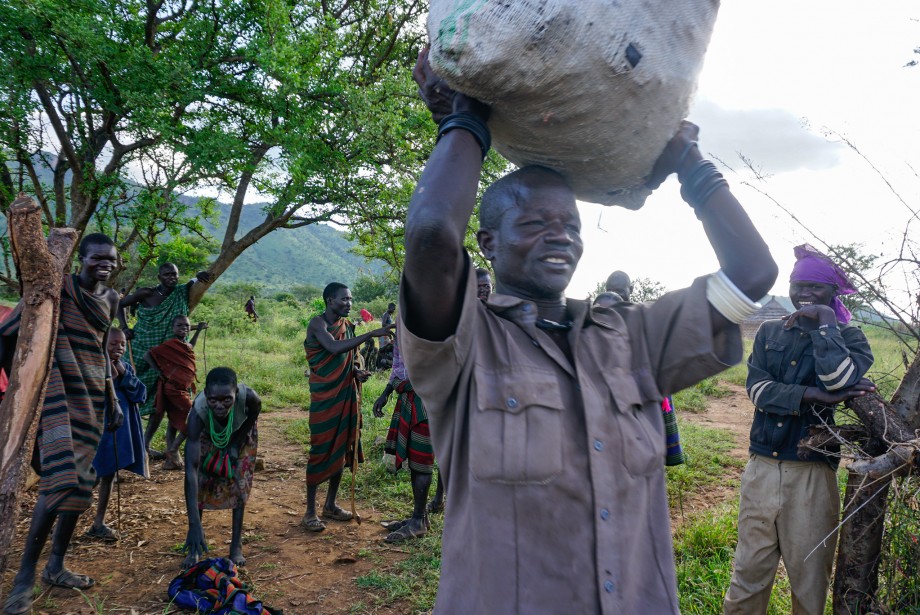 Impoverished residents say that selling charcoal is one of their few options for a means of survival.

The focus is on commercial burning. Charcoal burning for domestic purposes does not create as heavy a burden on the environment, Lotukei says.

However, Oming is doubtful the ordinance will help. Until other contributing factors are addressed – such as inadequate funding, lack of enforcement, police interference with forestry management, and political disagreements – cutting trees down for charcoal burning will persist, he says.

“The laws we have in place can work. But the problem is that the country is governed by politics, not the law. Politicians will interfere in initiatives to end the practice of cutting down trees because they want the popular votes,” Oming says.

Lotukei agrees that enforcement and corruption are obstacles.

“In Kotido we don’t have environmental police units as it is in districts with forests. Sometimes people give police kintu kidogo – Swahili for ‘something small’ – to avoid facing the law. But also, some of the settlement areas where charcoal burning takes place are too far from the police station with limited resources to combat the crime,” he says.

Local police are doing what they can, says Gerald Tumwesigye, the officer in charge at Kotido district’s Central Police Station.

“The problem is funding. As police, we have limited resources to affect operations aimed at fighting charcoal burning. Sometimes when we are informed of a lorry carrying charcoal … it is about 70 kilometers (43 miles) away and we don’t always have the fuel to move such long distance,” he says.

“If the forestry department doesn’t contain charcoal burning, in two years Kotido will be bare of trees,” he warns.

Some interviews were translated from Karamojong by Godfrey Oringa, GPJ.