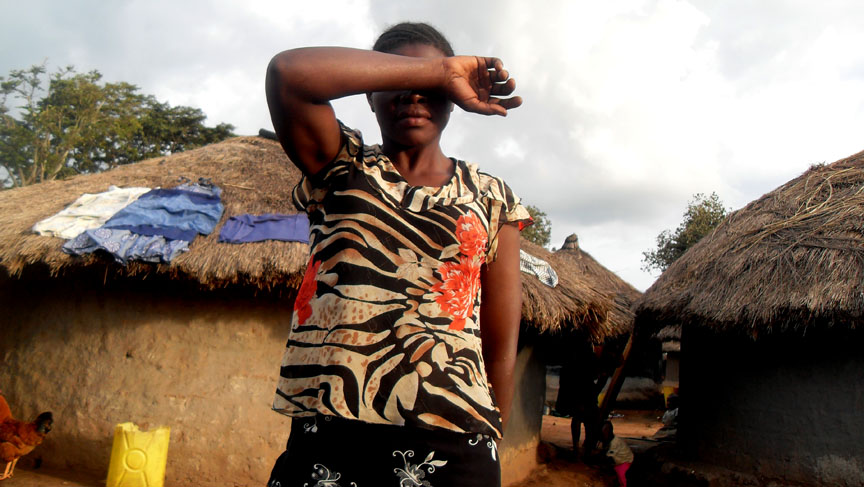 GULU, UGANDA – On Sept. 9, 1990, 21 years ago, righters from the Lord’s Resistance Army abducted Florence Amony from her home in Palenga, a village in northern Uganda, as she slept. She was just 13.

The fighters pretended to be government soldiers, and her father easily believed them because the family lived near a barracks. The armed group robbed the family of household items and even forced Amony to carry some of their belongings as they took her away from her parents, too.

Amony soon joined a group of other abducted children on their way to Sudan.

It took two weeks of walking, day and night, to get there. Along the way, Amony says LRA fighters killed children who couldn’t walk because of swollen feet. She says they were told that anyone who attempted to run away would be killed.

Later, the armed group gave Amony to LRA Capt. Christopher Kilama. She became his eighth wife and was forced to bear three children with him.

The group also trained her to fight. They forced her to fight against the government soldiers – even while she was pregnant. Amony lived in captivity for 12 years and only managed to escape after Kilama died.

In 2004, she found her way to a rehabilitation center in Gulu, a district in northern Uganda, run by Gulu Support the Children Organization, a nongovernmental organization, NGO, working to promote the well-being of war-affected children here. It was then that she tested positive for HIV. She spent six months, rather than the three months former abductees usually spend, at the center receiving counseling.

When she returned home, she discovered that her parents had died. She tried to seek help from Kilama’s relatives, but she found that most of them were dead, too. With no other relatives to turn to, she moved to the Holy Rosary settlement camp in Gulu town, where a woman helped her set up a small business cooking doughnuts.

Today, she sells her doughnuts in the market, but the profits aren’t enough to support her three children. Two of Amony’s children have already dropped out of school because she can’t afford to pay their school fees of 41,480 UGX ($15 USD) per year. Despite the introduction of universal primary education in Uganda in 1997, Amony and many parents in northern Uganda can’t afford to pay for additional school fees, such as uniforms and school supplies, as the war destroyed their livelihoods and property.

Amony says reintegration into the community has also been difficult. Ugandans call formerly abducted people “dug paco,” which means “returnees” in Acholi, the primary language in the Gulu region. In most communities, the returnees can’t reintegrate without people pointing at them. They say the returnees have “cen,” the evil spirit.

Amony says that every time somebody says she has cen, she gets angry. She reveals a scar from a recent scuffle in which she wrestled a woman who told her that she was possessed with the evil spirit in front of her children.

Although most former child soldiers struggle to reintegrate into the communities where they were once forced to commit atrocities, advocates say that it is the women in northern Uganda, especially those who were forced to have children with LRA fighters, who struggle the most. The government and NGOs have established various initiatives to help these women. But the women say that current approaches overlook them, take advantage of them and can’t make up for everything they lost. They hope life will at least be better for their children.

The more than two-decade armed conflict between the Ugandan government and the LRA left tens of thousands of people dead and 2 million people displaced in northern Uganda, according to the Institute for War and Peace Reporting, a nonprofit organization. The LRA also abducted tens of thousands of children, with estimates by various organizations ranging from 30,000 to 60,000. The fighters forced many of the abducted children to become child soldiers who raped, maimed, tortured and killed their fellow Ugandans.

In 2000, the government passed the Amnesty Act, which offered blanket immunity and reintegration packages, including money and basic necessities, to LRA fighters who laid down their weapons in order to help them start new lives. In 2006, the government and the LRA signed a truce brokered by neighboring South Sudan and began peace talks, but LRA leader Joseph Kony has repeatedly refused to sign a final peace deal, according to AlertNet, the humanitarian news service of Thomson Reuters Corp. Meanwhile, the people of northern Uganda and former abductees say they still feel the impact of the LRA insurgency.

Like Amony, Florence Ayot, 31, was also abducted by the LRA. She was 9 years old.

She served as a wife to Dominic Ongwen, a commander, and had two children with him, a daughter, 8, and son, 6. Ongwen is wanted by the International Criminal Court in The Hague for crimes against humanity and war crimes.

Ayot was trained to be a soldier. She says women fought with their babies strapped to their backs. Ayot escaped in 2005 after her infant son was shot while he was on her back during a fight with government troops.

She now lives in a rented home in Holy Rosary settlement camp. But she says her escape was fruitless.

“I feel that my return is useless,” she says. “The government has abandoned me and my two children. I cannot afford to pay for my children’s school fees.”

She says villagers constantly give her unwanted attention because of her former husband. They say she has cen.

“I am always called a killer possessed with the evil spirit,” she says.

She says she used to want to escape captivity, but now she’d rather still be in captivity because she hasn’t been able to rebuild her life here.

“Life in captivity was much better because then I had a home with the rebels,” she says.

She says she also has difficulty relating with men because of her abduction. She was in a relationship with a man, but he left her when he found out she’d been Ongwen’s wife. She says he took all the contents of her reintegration package from the government, which included an amnesty certificate, blankets, saucepans and some money.

Ayot now washes people’s clothes and plasters the walls of people’s houses with cow dung to earn money. She says the government should pardon her former husband, whose current whereabouts is unknown, so he can return home and take responsibility for his children.

“My former husband was also abducted,” she says.

Joyce Oryem, chairwoman of Holy Rosary village, says there are about 30 women here who have returned from LRA captivity. She says they are trying hard to survive in the community.

“These women face a lot of discrimination and are often insulted by villagers,” she says.

Men are afraid of the women returnees because they say that they are violent, and the women say that men who haven’t been in captivity aren’t disciplined, says Moses Odokonyero, a graduate student in Makerere University, who has worked closely with former child soldiers.

Amony says the other villagers also think they get special treatment.

“They don’t like us because there are always foreigners talking to us and taking our pictures, and they think we earn money from interviews,” she says, adding that this isn’t true. “And yet we are all struggling.”

Sam Lawino, a journalist based in Gulu, says that the amnesty certificates given to the returnees by the government to protect them from being labeled as killers and attracting revenge are ineffective.

Gladys Cano-Ogura, coordinator of Women Peace Initiative, a community-based organization that helps formerly abducted girls in Kitgum, another district in northern Uganda, confirms that reintegration is not easy for the returnees.

“They are meeting a lot of challenges in reintegrating,” she says. “When they came back under the amnesty law, some of them were not fully accepted by their parents since they had children whose fathers’ clan was not known.”

Some of the returnees prefer life in captivity to life back home, where they have to work in order to eat and pay school fees in order to study.

“Their personal priority is survival,” Oola says. “When they were in captivity, they could shoot their way to get something to eat. But that has now changed.”

Another reason returnees find it hard to adjust is that members of their communities fear having to fight for the limited resources available in northern Uganda, Oola says. As the war destroyed most of the property here, land has become the most important resource.

He says one reason is because many women were forced to marry and bear children with the LRA.

“First, the female abductees were forcefully given off to senior commanders as wives and mistresses,” he says. “Many were also impregnated and forced to bear children without consent. A woman returning home with children is bound to be rejected by their own family members.”

He says the traditional relation between land and marriage also leads to rejection.

“But it’s not just about the children they return with,” he says. “It’s partly a question of resource availability and fear of land conflicts,” he says. “Female returnees bearing girls were more likely to be received home than those with boys. Apparently this was because the community perceives girls as likely to be married off but the boys who grow up and start claiming land.”

At the same time they face this rejection, women must cope with the traumatizing experiences they endured in captivity, including rape, sexual violence, unwanted pregnancies and combat injuries, according to reports on 35 formerly abducted mothers by the Uganda Association of Women Lawyers, which aims to use the law as a social justice tool to promote the human rights of women and children. These women have limited access to health facilities and health-related information.

The government and various humanitarian organizations have set up interventions to assist former abductees.

The Ugandan government officially launched the Peace, Recovery and Development Plan for Northern Uganda to assist northern Uganda in its transition from war to peace. The government began implementing the plan in 2008, but many, like Amony, say this has not had a great impact on their lives.

There are also NGOs working in this area, like Empowering Hands, a group of women affected by the war that includes many former abductees. The women support one another in peer groups to help each other reintegrate into their communities.

But according to Denis Martin Okwir, program coordinator of Empowering Hands, the intervention approach by government and humanitarian organizations considers only groups of women instead of focusing on the women’s individual needs.

“Widows whose husbands were killed during a particular time should join this group, and another should join this other group,” Amony says she is told. “I am tired of these groups. If someone wants to help me, let them help me as me.”

Lawino says that NGOs and the government also tend to use most child mothers as icons for donor funding. He says there is little effort to engage them other than placing them in certification courses for skills, such as tailoring and handicrafts. Women say they aspire to better jobs but have little qualifications because their abductions interrupted their educations.

Amony says that if life can’t be better for her, she at least wants life to be different for her children.

“I want my children to get an education,” Amony says.