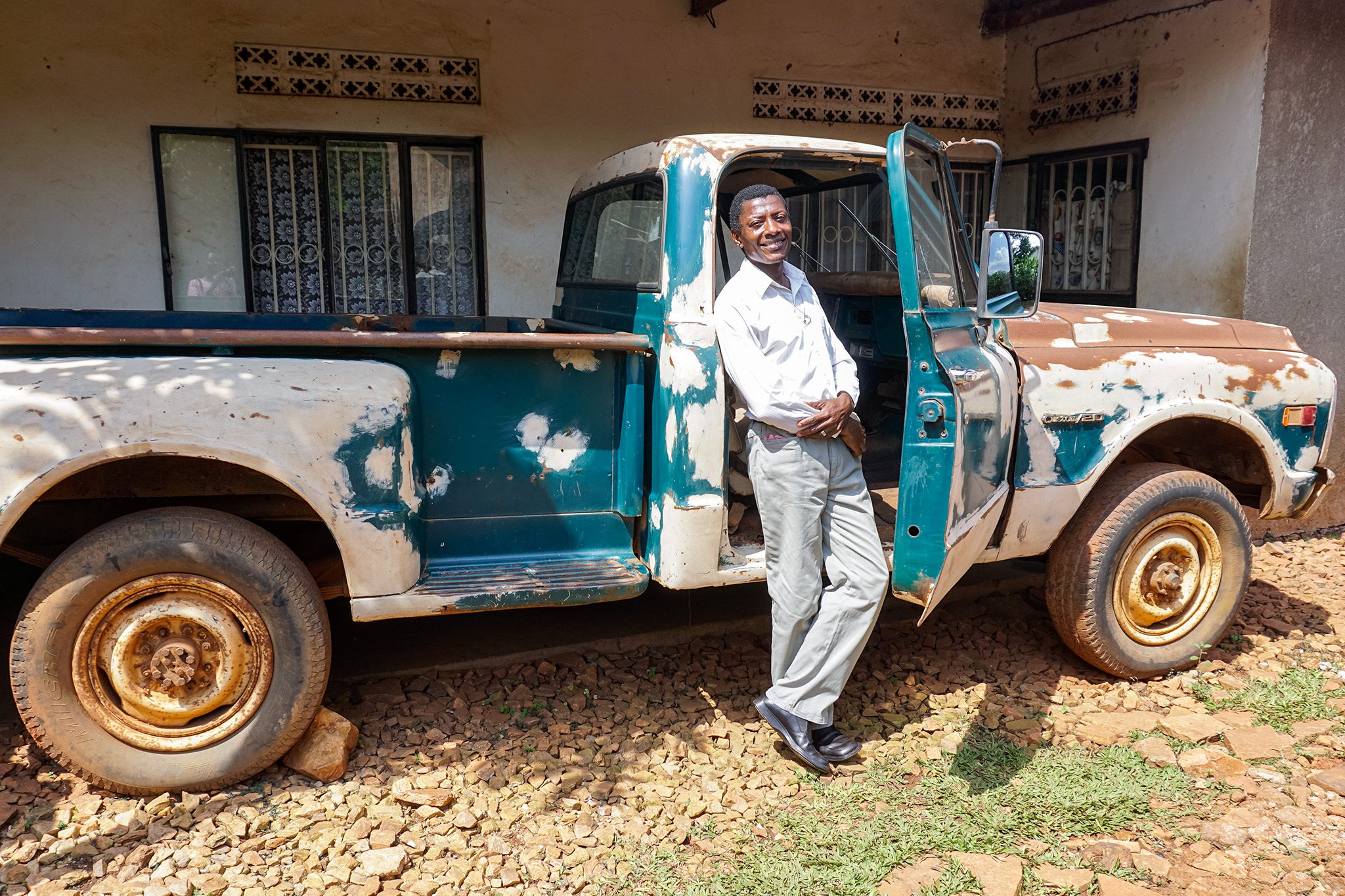 KAMPALA, UGANDA — When Ali Karume took out a loan in 2014 to buy the Chevrolet of his dreams, it was the next logical step in his lifelong devotion to automobiles.

“Vintage cars were my childhood fancy,” says the Kampala man, in his late 30s. “My grandfather, who owned one, would give me tasks, which on completion would earn me a ride.”

But Karume could not have known just how much his devotion would be tested after his beloved car was impounded by police shortly after he purchased it. It took four years to reunite with the car, but Karume never considered giving up.

“I could not let go of my Chevrolet. We have an umbilical cord connection,” Karume says. His experience mirrors those of many Ugandans forced to confront public officials to obtain licenses, open businesses, protest government policies or retrieve impounded belongings. Frustration can build to the point where people consider desperate measures – resisting and even fighting with authority figures.

But in recent years, an unlikely alternative to street justice has emerged: a reality television program that allows people like Karume to find the help they need.

“It was a protracted fight between me, lawyers and the police,” Karume says of his struggle to retrieve his car. “But using police to mediate did not shift things, until I sought out the help of Bukedde Television.” 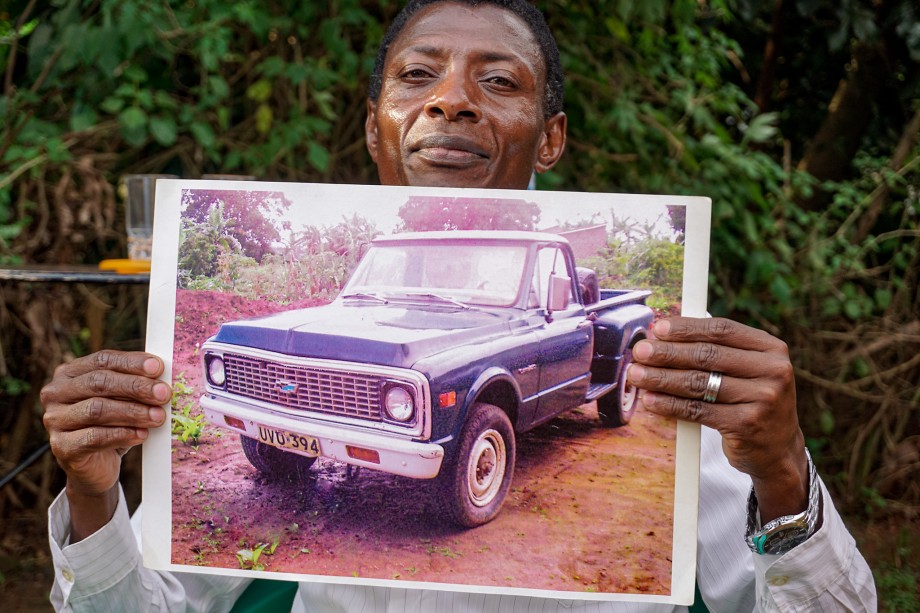 Karume holds a photo of his prized Chevrolet truck as it appeared before being impounded in 2014. He recovered it after appearing on a reality TV legal program and hopes officials will pay to restore the car.

Karume is referring to a program on Bukedde TV called “Fayiro ku Meeza,” which in Luganda means, “the file is ready for hearing.” The program highlights and articulates legal disputes to make them understandable for people not fluent in English.

The show’s main targets are people in positions of power, which they sometimes use to take advantage of poor people, says Bukedde TV producer Hamza Nganwa.

It also focuses on rich people who may use their money to silence the police or the judiciary to divert the course of justice, Nganwa says. Karume believed this was exactly the kind of help he needed to help bring his car home.

Alfred Okello, deputy inspector of the Police Professional Standards Unit headquarters in Naguru, confirmed to GPJ that police had taken possession of Karume’s car but said he could not discuss specifics of the case.

Back in 2014, when two policemen saw Karume’s car parked at his employer’s house in a suburb of Kampala, they towed it to a police station, stating that it appeared abandoned. When Karume finally located the car, officers advised him not to pursue a case. Later he was asked to cover the expense of towing and auctioning the car, which he later learned was not scheduled to happen.

“This confused me the more, and I went to higher offices who also said, ‘Yes, the car was auctioned.’ They denied me the details. They wanted 4 million Ugandan shillings ($1,090) from me,” Karume says. When he did not produce the money, his car vanished.

It was hidden for over two years, until the person who sold it to Karume saw it parked in a garage.

The garage owner said some policemen had taken it there and refused to retrieve it. They also ordered him not to let anyone else take it. 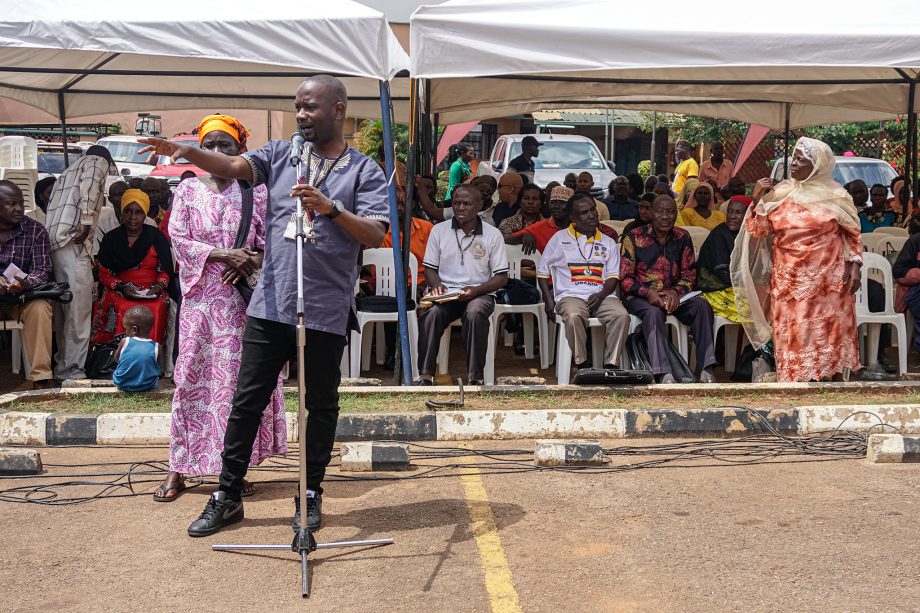 At the Bukedde offices, where the “Fayiro ku Meeza” reality TV program is filmed, people attend a meeting about land ownership squabbles. Some of their stories are selected to air on the program.

As a last resort, Karume turned to the Bukkede TV show, which he had watched a few times before. “Fayiro ku Meeza” is a collaboration between Bukedde TV and the Democratic Governance Facility, a Kampala-based human-rights organization.

“On average, I get about two people per day coming to seek appointments to be put on the TV show, and more call me on phone,” producer Nganwa says.

Unlike TV justice programs with a judge and audience, “Fayiro ku Meeza” just features a person with a legal dispute who explains the facts of his case. When Karume appeared on the show in June 2018, he related the entire frustrating attempt to locate and retrieve his car.

Four days after Karume’s appearance on the show, he received a court order for his car to be returned. Karume believes the show was watched by people he calls “big shots,” who gave the orders to release the vehicle. He also believes the police will pay for the damage that occurred while it was in police custody.

Karume credits the TV station for his breakthrough.

“Things can get tough accusing police to the police. They all defend each other,” he says. “It has taken me so long, but I will eventually get justice.”