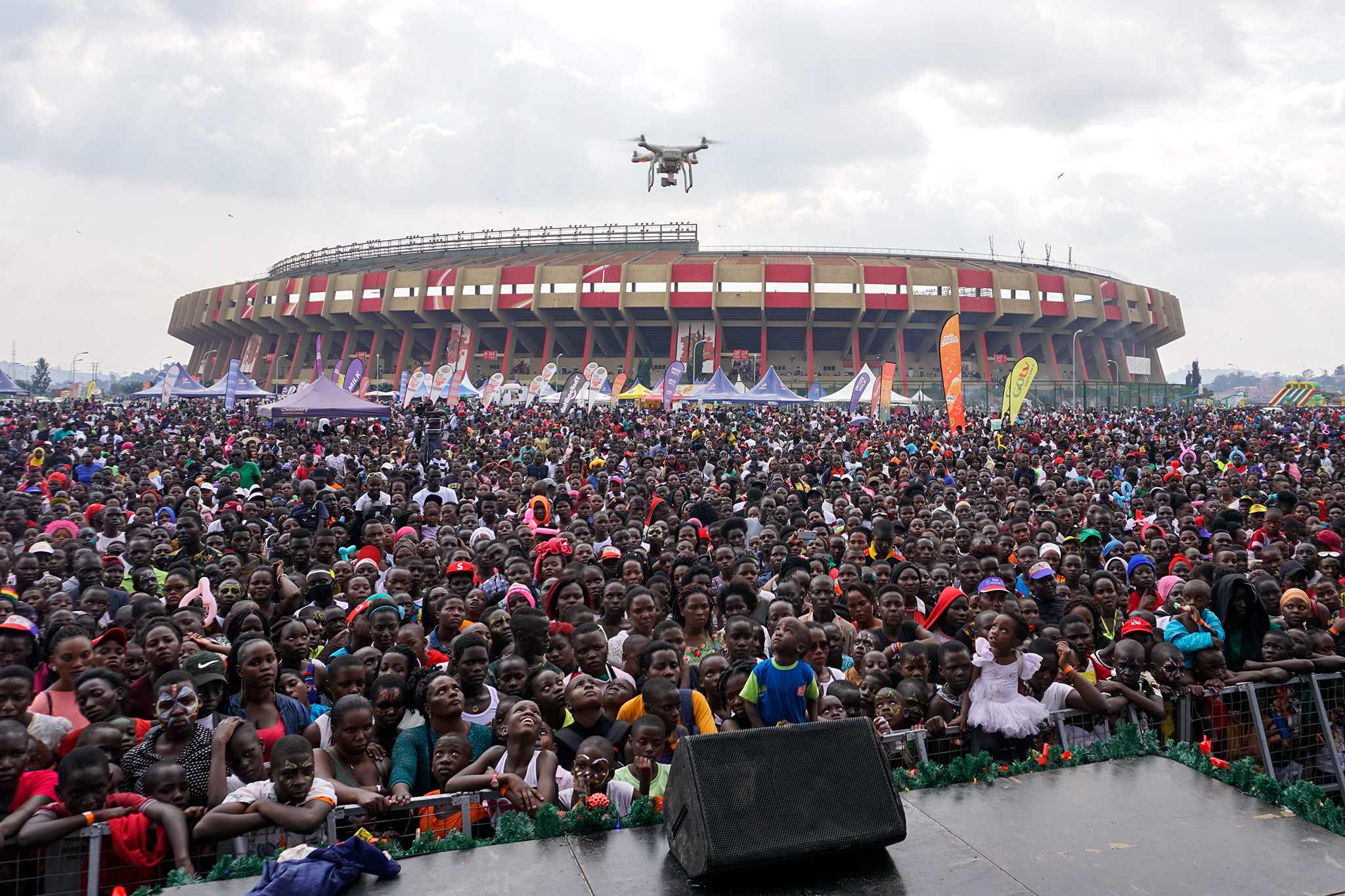 The drone descends and hovers above the newlyweds, who stand at the church entrance. Muwereza, owner of Play Motions, a photography and video production company, controls the unmanned aerial craft with his smartphone. He flies the drone across the church compound and over the neighborhood to capture a stunning overhead view of the wedding.

For Muwereza, expanding his business to include drones has been filled with both risks and rewards.

While customers are increasingly interested, he says obtaining a license from local Ugandan police or the Uganda Peoples Defence Forces is difficult. Drone pilots in Kampala must have a license, which requires a lengthy application. But the rest of the process for approval remains unclear.

“Every time we are going to use a drone, we have to obtain permission from the police in that area,” Muwereza says. 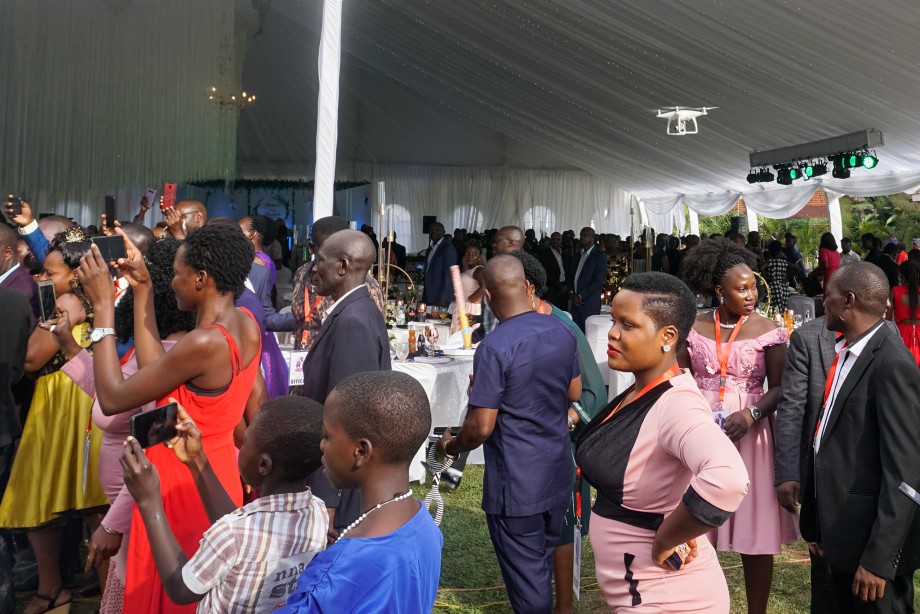 A drone captures the festivities at Julius and Jacinta Shapi’s wedding reception on February 15.

Even though obtaining a license isn’t a straightforward or speedy process, the drone market is growing.

Architects like them for aerial surveys. Videographers who have them are booked months in advance for weddings and events. The military and police operate them for security surveillance. Uganda’s Ministry of Health is considering using drones to deliver blood and antiretroviral medications to remote parts of the country.

But expanded use of drones will require more coordination among government agencies, professional users say.

“There are no laws,” says Arnold Mugasa, a videographer and architectural photographer. “And there are no procedures to follow when applying for a drone license.”

Juliet Nantume, senior technician at Vision Group, a large multimedia company, says she has requested licenses for aerial photo shoots in the past.

“We applied to UPDF and received no response for a year now,” she says, adding that their request for permanent license for aerial photo shoots has never been answered.

No-fly zones also are unclear, frequent fliers say, and drones are often confiscated by military personnel. Even when drones are kept out of restricted areas around military bases and crowded areas, Nantume says their equipment is subject to seizure by officials.

“We do not fly drones in sensitive areas,” she says. “We mostly fly in rural areas. We write to the person in charge of security in the area where we intend to fly it, and we are given permission. But sometimes the drone has still been confiscated.” 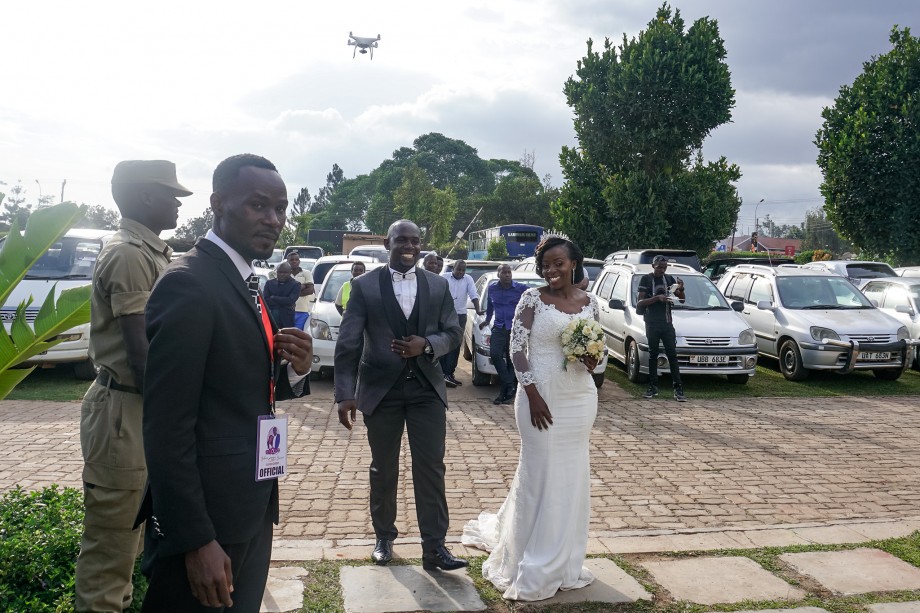 Alex Ssekyanzi, a self-employed drone operator, says his services are becoming common at weddings and other events.

While the UPDF uses drones for surveillance, military officials have concerns about citizens using them for the same purpose.

Brigadier Richard Karemire, spokesperson for the Ministry of Defence and Veteran Affairs, says drones are most often confiscated when there are security concerns.

Karemire acknowledges that local laws around the use of drones are murky.

“In the absence of those regulations and laws where we are sure drones can be used to harm national security, we have no alternative but to restrict their use,” he says.

But new drone regulations are increasingly likely as the Ministry of Health considers proposals from technology companies to assist with providing key supplies to improve health outcomes in the most remote parts of the country.

The ministry is in talks with local companies, who are proposing the delivery of blood and antiretroviral drugs to people living with HIV/AIDS, says Commissioner of Community Health Jesca Nsungwa Sabiiti.

There is no published time frame for when drone regulations might be updated or when the Ministry of Health may begin using drones for medical deliveries.