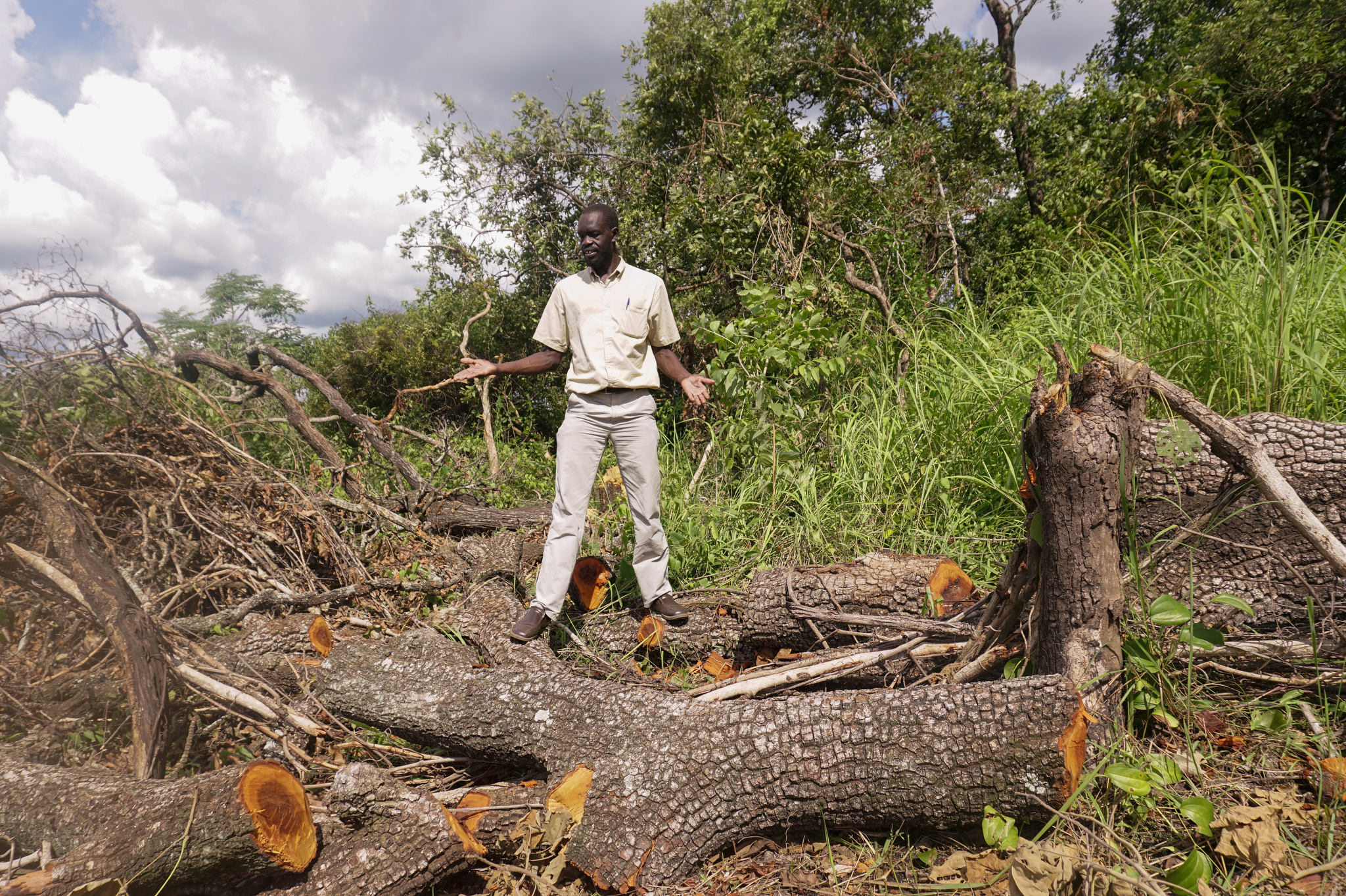 YUMBE, UGANDA — For 18 years, Mustafa Gerima worked as a biology teacher in northern Uganda and Tanzania.

But in June 2019, he decided to dedicate his life to a new mission: saving Uganda’s shea trees, which have been decimated by illegal logging. The tropical African trees can grow to a height of 12 meters (about 40 feet), with thick trunks and wide branches, making them attractive to loggers. But the fruit of the trees — the shea nut — can also be pressed into shea butter, a valuable commodity used in everything from cosmetics to cooking oil.

After witnessing the massive destruction of these trees in the area around his home village of Maracha, in northern Uganda, near the border with Democratic Republic of Congo, Gerima decided not to renew his teaching contract. Instead, he embarked on a two-week journey, walking from Kampala, Uganda’s capital, to the city of Arua, about 475 kilometers (295 miles) away — a stunt designed to raise public awareness.

“It was hard in between. It rained for four hours while I walked at night, but I had to keep moving,” Gerima says. “These challenges, however, made me stronger.”

Since then, his activism has grown in scale and ambition. He recently walked about 625 kilometers (388 miles) from Kampala to Nairobi, Kenya, to highlight the issue. He intended to walk even farther, but the coronavirus pandemic forced him to cut the journey short.

Today, he is living in Midigo, a small town in Yumbe district, a mountainous area near the border with South Sudan that has one of the country’s highest concentrations of shea trees. There he is raising shea seedlings and creating awareness among local residents and officials about the value of the trees, in order to save them from extinction.

“If people know its value, they won’t cut it for charcoal,” Gerima says. 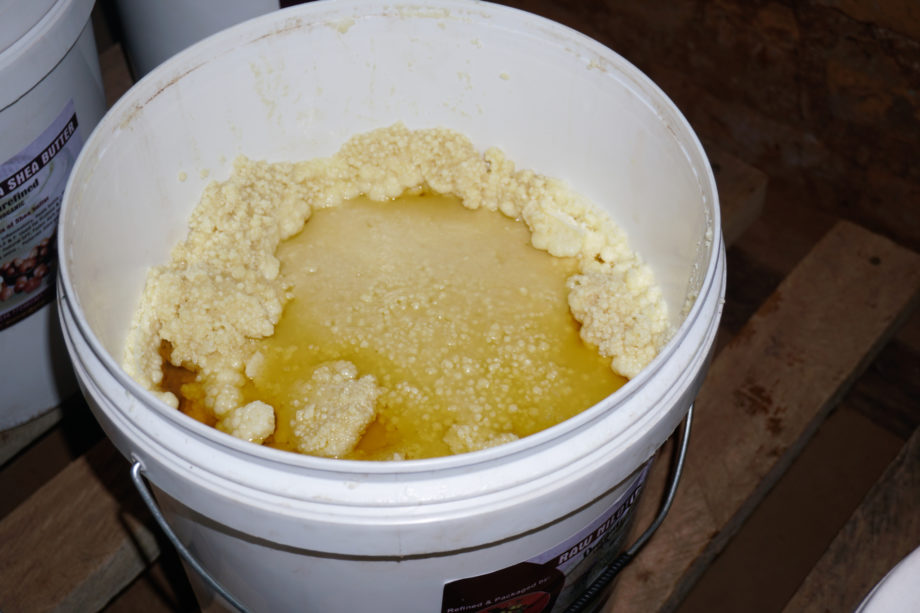 A bucket of raw shea butter sits at a processing facility in Midigo.

From 1990 to 2015, Uganda lost 63% of its forest cover due to the felling of trees for firewood, charcoal and timber, and to clear land for farms and towns, according to data from the Ministry of Water and Environment. In 2006, the Ugandan government declared that the shea tree was endangered, and in 2018, it banned the cutting and transportation of the trees altogether. Despite these protections, shea trees are still cut down on a large scale.

In Yumbe district, “high dependency on the shea tree in the last five years alone has led to depletion in its coverage from 25% to 15%,” says Andama Swaib Solo, the district’s senior environment officer.

Loggers say the economic incentive to cut down shea trees is still great.

“I know that it’s illegal to cut trees this way, but this is the only way I am able to survive,” says Stephen, a logger who asked to be identified only by his first name because he feared government retribution. “Trees are nature’s gift. It’s not that I am targeting the shea tree, but its charcoal is in high demand and the best quality.”

“If people know its value, they won’t cut it for charcoal.” Mustafa Gerima Activist

If demand for the wood decreases, Stephen says, then he will stop cutting it.

Gerima wants to help people recognize how valuable shea trees can be if they are kept alive. He has been lobbying local leaders to invest in machines to process shea butter. And he has built a nursery where he has raised about 3,000 seedlings — a small step toward his ultimate goal of planting 7 million shea trees to replace those lost to deforestation.

His activism, he says, hasn’t made him popular. His house has been broken into.

“I have become an enemy, especially to loggers and the community,” Gerima says. “I don’t feel safe.” 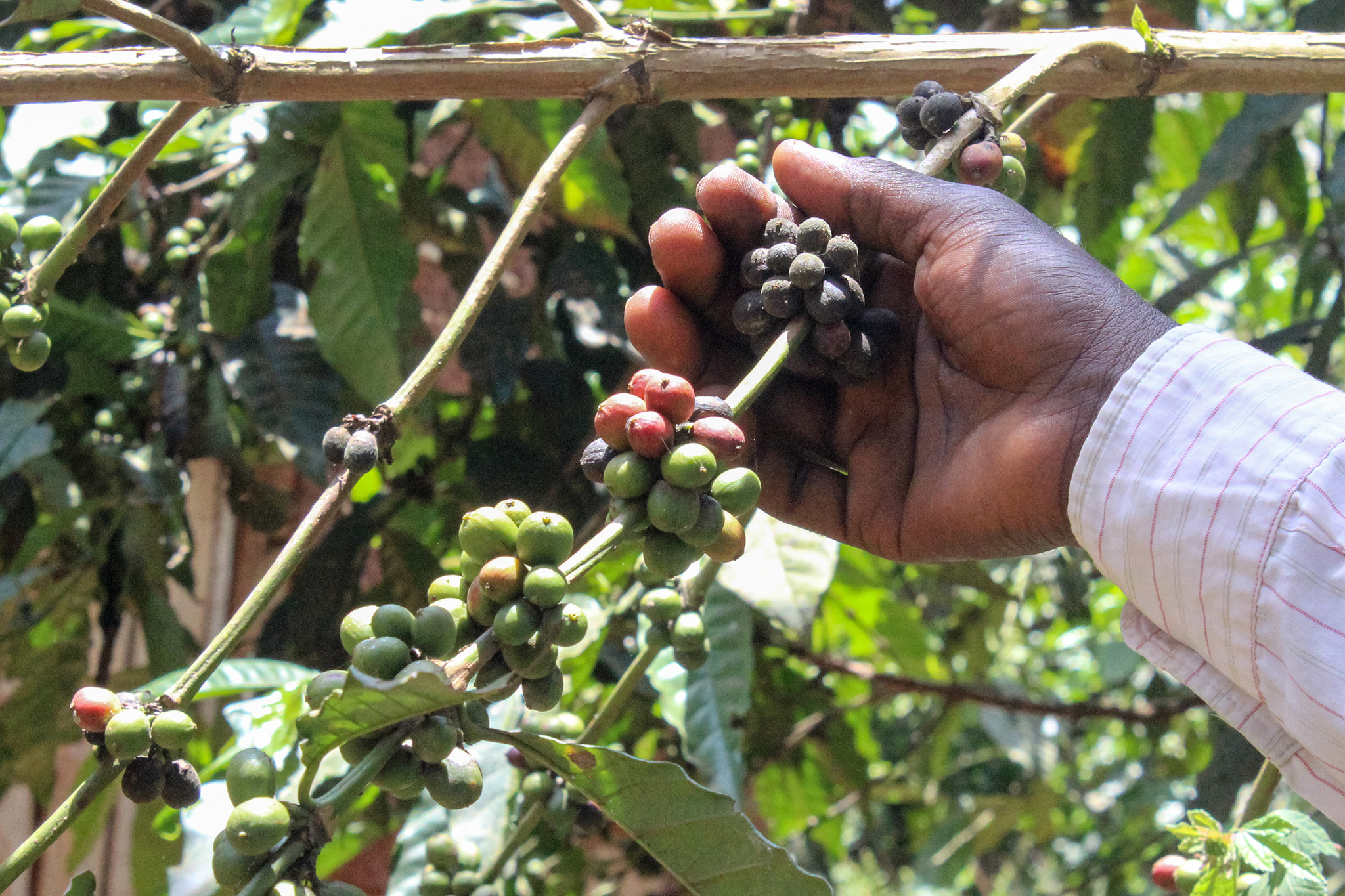 Residents of northern Uganda have used shea butter for centuries, mostly in food and as a body moisturizer. But as demand for shea products has increased internationally, Uganda has begun to focus more on producing and exporting shea butter to countries like Germany, Italy and Japan.

In 2019, Uganda exported about $760,000 worth of shea butter — far less than other countries like Mali, Burkina Faso and Ghana. But that year, the Uganda Export Promotion Board, a public institution that coordinates the development and promotion of the country’s exports, set an ambitious target for local producers, aiming to increase annual shea butter exports to 200,000 to 500,000 tons by 2022. The country currently exports 30,000 to 150,000 tons a year.

“Our shea butter is the best in the world,” says Sam Karuhanga, senior export marketing executive with the export promotion board. But Karuhanga says the country needs to establish more shea butter processors and raise quality levels so Uganda can compete on the international level. “Most of the butter produced is not yet to export standards,” he says.

“We are aware of his activism. His recent walk to Nairobi to raise awareness was widely followed on social media,” says Tony Achidria, senior public relations officer at Uganda’s National Environment Management Authority. “We need more ambassadors like him in order to further push awareness about the need to not only conserve the shea tree but other endangered species as well.” 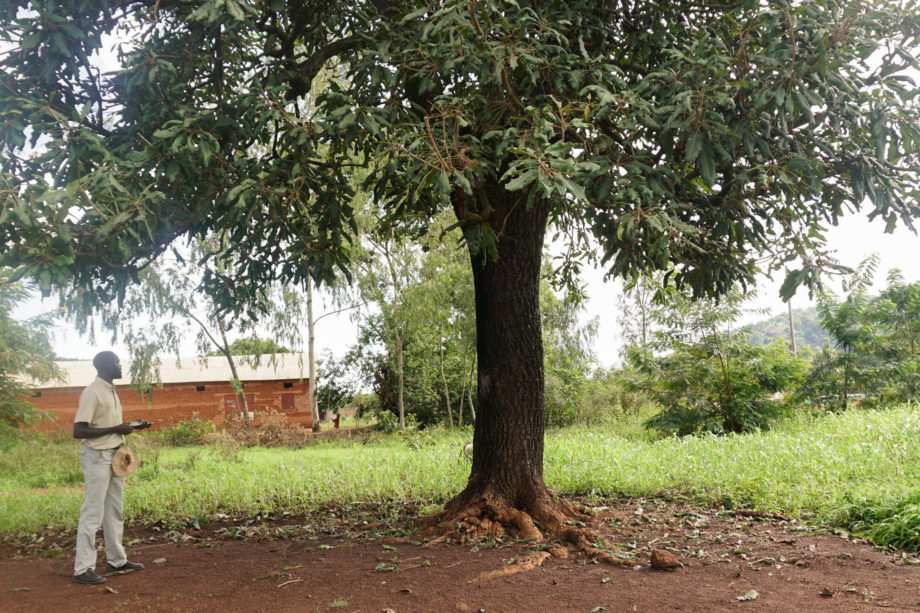 Mustafa Gerima enjoys the shade from a shea tree. He hopes to eventually raise 7 million seedlings to replace the trees loggers have cut down.

The National Environment Management Authority recently launched a project to help local communities recognize the financial and environmental benefits of creating shea products rather than cutting down the trees. As part of this project, the agency taught communities to extract shea oil using a cold-press technique, rather than by boiling the shea nuts, which makes the oil much more valuable.

“For instance, 20 liters of oil extracted using the cold press was being sold at over 250,000 [Ugandan] shillings [$70] — this is the same amount that one would get from burning a shea tree for charcoal,” Achidria says. “So communities realized that it is more profitable to conserve the tree and utilize its products sustainably than cutting them for charcoal.”

While Gerima says he has made enemies in Yumbe district, local officials in Midigo have praised his efforts as well.

“Mustafa is a savior. His work needs to be supported by the government, NGOs,” says Gasper Onzima, the mayor of Midigo. “I am aware he experiences threats from loggers. They don’t share his vision of conservation nor value the shea tree.”

“People are calling me a hero because I have walked for the shea tree,” he says. “But I am no hero yet. In 30 years I may be more deserving of such a title, after raising 7 million shea seedlings and growing a shea forest.”