Skip to main content
The story you are reading was published on Thursday February 25, 2016. To read more recent stories click here. 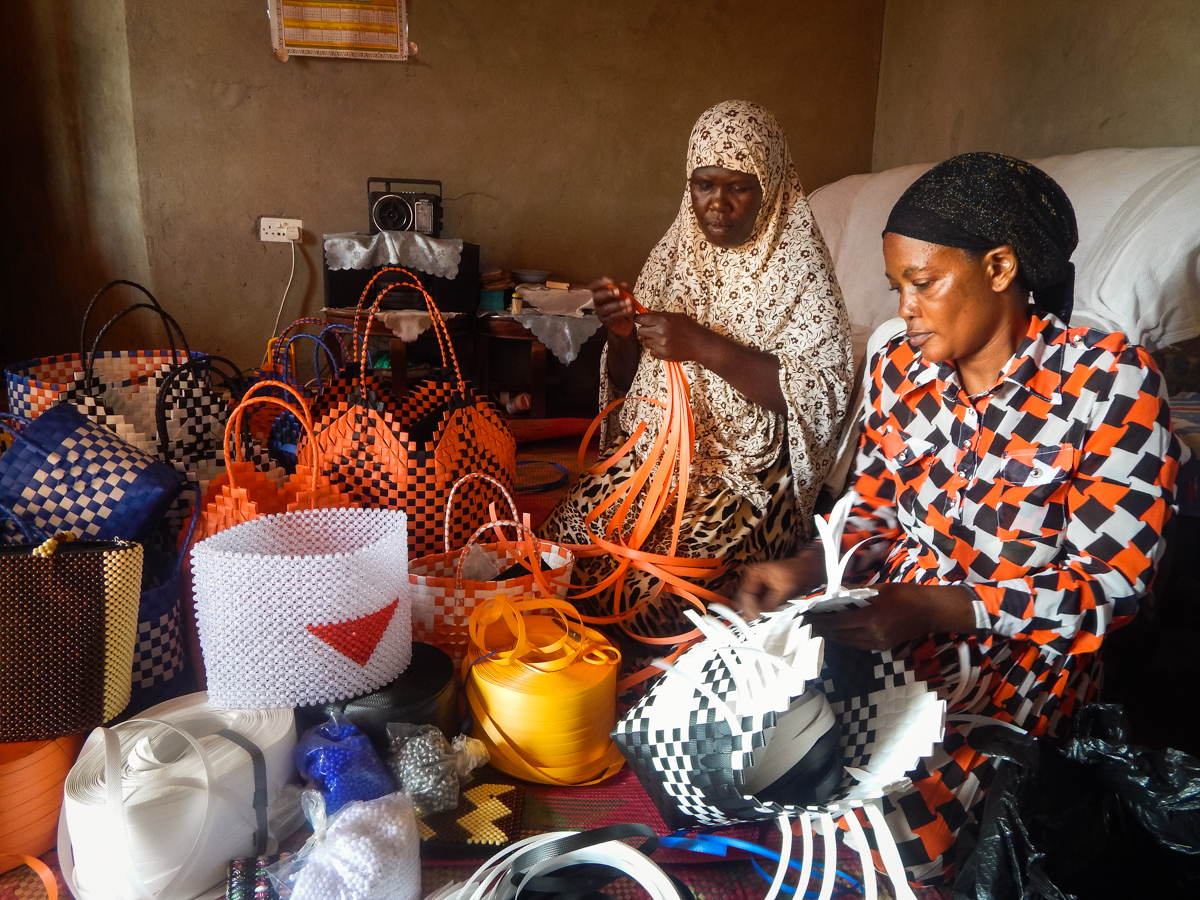 This has been their work since 2014, when the erstwhile housewives saw an opportunity in Uganda’s 2009 plastic bag ban. That ban was formally implemented in April.

Shakira Nakamya, at 26 the youngest woman in the group, has been creating necklaces, bracelets and sandals since she graduated from Kyambogo University in 2009.

“When I heard about the ban on plastic bags, I dropped all the other crafts and started weaving bags,” Nakamya says.

When I heard about the ban on plastic bags, I dropped all the other crafts and started weaving bags. Shakira Nakamya, who weaves and sells reusable bags

She taught her sister, Jazira Byamukama, to weave the bags. Later, two of their neighbours, Hadija Nalukwago and Jennifer Nabankema, joined them. Each woman makes four bags every day, then they take them to Kampala’s market areas and ask vendors to display them. The bags go for between 7,000 Ugandan shillings ($2) and 15,000 shillings ($4.32).

“Our bags are durable. Unlike kaveera, they are very strong and can be washed when they get dirty,” Byamukama says, using the local word for plastic bags. “They are made of strong fiber and are bulky, one cannot just throw them anywhere to litter and choke the ground. They are also easy to dispose as they burn easily.”

Uganda’s ban was formalized about seven years ago, but the government agreed to work with plastic bag manufacturers to recycle the bags instead of ban their use. In April 2015, the National Environment Management Authority (NEMA) stated that the recycling efforts were insufficient, and the authority shut down some factories’ plastic bag divisions and confiscated bags in Kampala supermarkets. 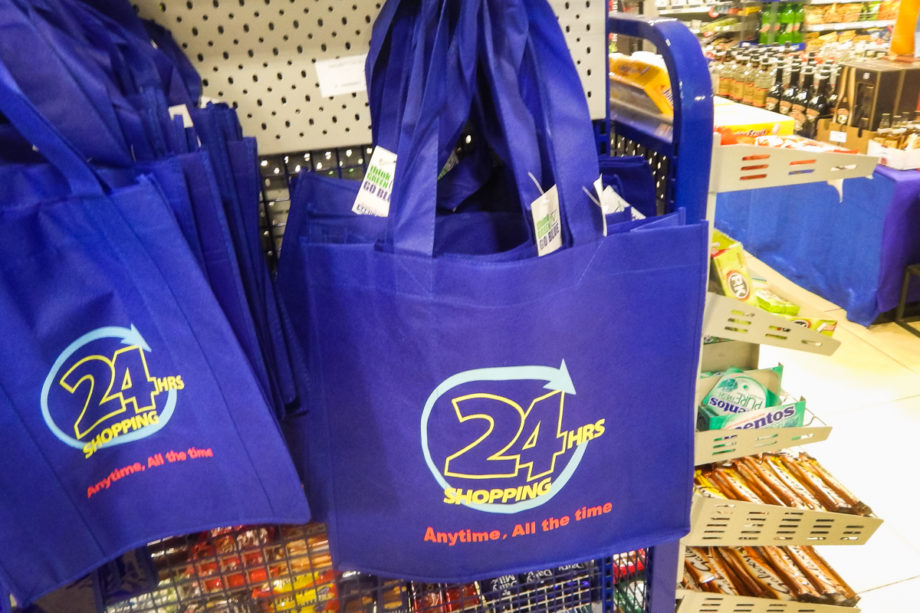 These reusable bags have replaced plastic bags at Nakumatt, a supermarket in Kampala.

Plastic bags were taking a toll on the environment and the budget of the country, Naomi Karekaho the public relations officer for NEMA told Global Press Journal for a September 2015 article. About 38,600 tons of plastic bags go into the environment annually and take about 400 years to decompose, she said. The government spends 10 billion shillings ($2.9 million) in Kampala alone to unclog drainages blocked by polythene, she said.

Plastic bags are still in use in some places but NEMA hopes to enforce the ban in every part of the country.

“We aim to be free of polythene bags within the next five years,” Karekaho says, in a November interview. “Our campaign has been majorly in the capital but we are sending our officers to upcountry districts to ensure there is no more use of polythene bags.”

Meanwhile, local entrepreneurs are cashing in on the ban by innovating packaging alternatives.

In an industrial area of Kampala, a factory buzzes with activity.

The factory, ORIBAGS Innovations, makes gift bags from cotton waste and millet straws. The ingredients are ground to pulp to get paper starch, which is then glued together to make bags of different colours and designs.

There has been a boom in sales since the ban on plastic bags took effect in April, says Rusia Orikiriza, the founder of the company.

“The paper material is a good alternative because it is easy to dispose,” Orikiriza says. “It does not take even five months to decompose. Besides, it poses no danger while disposing because one can simply burn it and in a minute it is gone without leaving behind poisonous fumes like those of the kaveera.”

Her clients include supermarkets, environment and marketing agencies and trade fair organizers, among others.

Our bags are durable. Unlike kaveera, they are very strong and can be washed when they get dirty. They are made of strong fiber and are bulky, one cannot just throw them anywhere to litter and choke the ground. They are also easy to dispose as they burn easily. Jazira Byamukama, who weaves and sells bags

Orikiriza developed a passion for craft while a student at Makerere University, where she made bead bracelets and necklaces in her free time. With time, she got support from local organisations such as Uganda Industrial Research Institute, which provided incubation for her business. She also learned commercial technology at the institute. Orikiriza travelled to villages in India where she learned to make many other crafts by hand. Brimming with inspiration, she set up her own factory in 2009. Today, she employs 34 workers.

Clients love the bags because they are custom-made, she says.

“The customer comes with an idea, it can be a logo of a company, a flag of a country, a company; it can be any event that one wants to commemorate. We then create the bags according to the customer’s wish,” she says.

Some supermarkets are also providing packaging alternatives after phasing out plastic bags.

Nakumatt, a high-end store in Kampala, sells reusable bags made from polypropylene.

“Our customers love this alternative,” says Enoch Kigozi, the merchandise floor manager. “They buy the bags and after use, they fold them and keep them in their handbags until the next time they come shopping.”

The store has branches in Rwanda, which banned plastic bags years before Uganda did, so it was easy to phase out plastic bags in Ugandan branches as well, Kigozi says.

But many Ugandans are yet to fully embrace alternatives to plastic bags, saying they are more expensive and less practical.

“I love ORIBAGS for their beautiful designs, but they are not strong enough for shopping chores,” says Janet Nansinkombi, a Kampala resident. “They are perfect for celebrations but not everyday use. They easily give way.”

“I never used to bother about the cost of plastic bags because it was negligible,” she says. “Now the trend is different. You cannot buy those big bags every time you shop, yet you cannot carry one to the office without looking like a clown.”

“These local investors not only bring the alternatives nearer to the people but also enable our policies to gain ground quickly,” Nuwagira says.

He says NEMA will seek incentives such as tax breaks for those entrepreneurs to help their industry grow.

Nakamya and her friends hope to register the group and employ more unemployed women as demand for their bags grows.

“In Uganda if a group of women come together and do good work, the government helps them with funds to make their business expand if the group is registered,” she says. “This is our dream.”