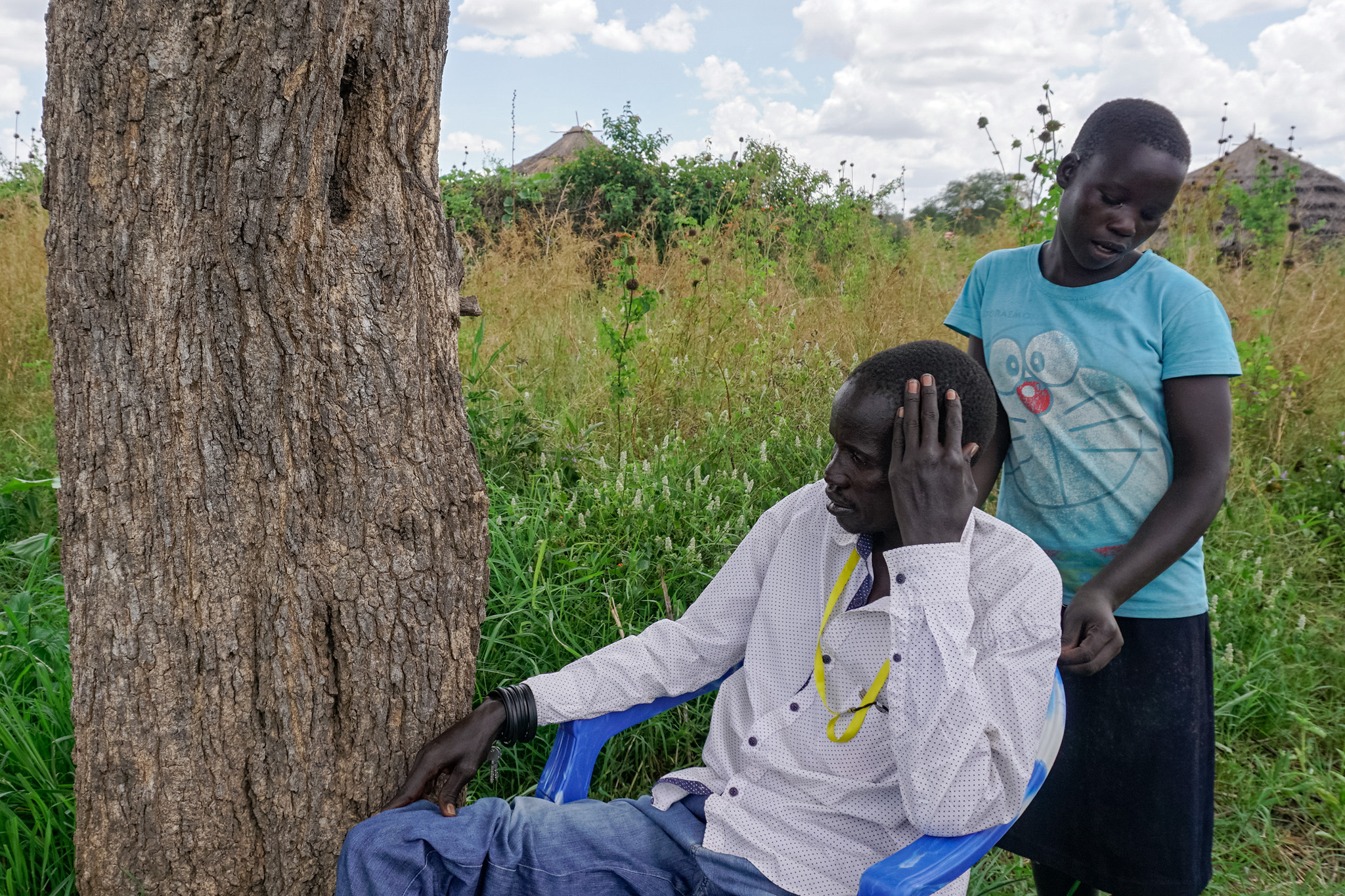 She lived with her aunt in Nadunget village, in northern Uganda’s remote Karamoja region, until March 2018. Then, a woman she vaguely knew from her community, but only as Stella, convinced Lillian that her aunt had given permission for her to go with Stella to Kampala, Uganda’s capital.

At the time, her aunt was out of town, just a few kilometers away, to attend her father’s funeral. So, Lillian agreed to go with Stella, who promised her that when they arrived, she’d earn money, which would be sent back to her aunt.

“We traveled at night on a bus from Nadunget to Kampala, where we arrived about 4 in the morning,” Lillian says. “She took me to a room where five other children lived.”

The following day, she and the other children were taken to different intersections and strategic locations in the city and told to beg for money. She says she was instructed to run after cars, especially those stopped in traffic jams, and approach passersby with her hands outstretched.

“Stella was always moving around the various places where she placed us, to ensure we were working and not sleeping,” Lillian says. “She would collect money from us at various intervals during the day. I used to earn from 5,000 to about 30,000 (Ugandan) shillings ($1.35-$8.10) on a good day, and I was expected to give all the money to her.”

If any of the children were found sleeping or idling on one of Stella’s visits, they would be beaten, Lillian says. And they’d only eat based on what they had earned. Stella promised Lillian that she was sending some of the earnings back home to her aunt.

After less than a year on the street, Lillian and the others were returned to their villages after a police raid broke up numerous child labor rings in Kampala, including Stella’s. 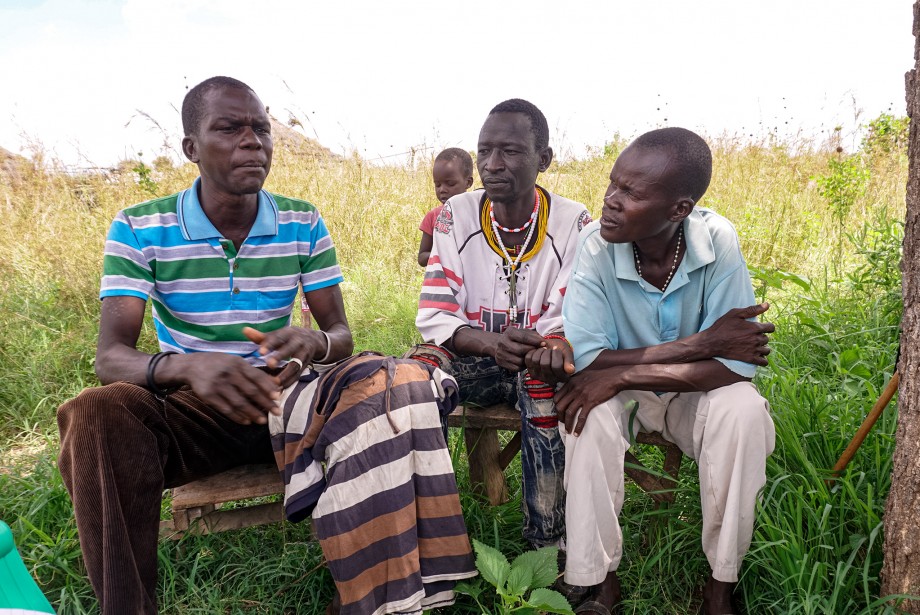 Peter Lele, left, was part of a delegation to Kampala, Uganda’s capital, that showcased the dire circumstances children were living in when they were sent there to beg.

Children in the Karamoja region are increasingly being trafficked or running away on their own to work in other parts of the country to make money for their families, experts and local leaders confirm. Many children in this rural, isolated part of Uganda aren’t in school, since school fees are out of their families’ reach. Other reasons for low education here include a general lack of resources, gender-based discrimination, lack of transportation and abuse in schools, according to a U.S. Department of Labor study on international child labor and forced labor.

The Karamoja region is classified as one of the poorest in the world by the United Nations Population Fund, which estimates that more than 60% of the region’s 1.2 million residents live in poverty.

In June 2018, the Government of Uganda published results from the 2016-17 National Labour Force Survey, which revealed that more than 2 million children in Uganda are employed in some form of child labor. The report notes that children from the Karamoja region are at risk of being trafficked for labor in urban centers, where begging, street vending, domestic work and commercial sexual exploitation are the most common outcomes.

While the practice of leaving the area to beg in the capital is often condoned by family members, the district governments in the Karamoja region are working to change residents’ attitudes about this practice. Police have intensified patrol efforts to stop children from running away in the Karamoja region.

Micheal Ongicha, district police commander for the Napak district, says in order for the practice to stop, all families will have to accept that it is wrong and dangerous to send their children to the capital to beg.

“When the children are taken with the consent of parents, it is even more complicated,” he says.

But curbing the practice has also been difficult because traffickers are always changing their strategies, making it difficult for the government to maintain surveillance efforts, he says.

“We intercept vehicles and stop movement of children going alone or with an adult in unclear circumstances,” he says. “But these days they walk long distances on foot, so it is hard to track them.”

Joseph Lomonyang, a local council chairman in the Napak district, within Karamoja, says local communities resist efforts to stop children from leaving the area to work or beg, as it’s often a family’s only reliable source of income.

Ongoing educational outreach and more extreme measures are, however, starting to have an impact, he says.

“We took elders to see how their children are living in Kampala,” Lomonyang says, adding that the conditions they witnessed horrified them. “They all condemned it, and now they have come back as ambassadors to speak against the practice.”

Peter Lele, 39, was among the local residents selected by district leadership as a role model in the fight against child trafficking. He was on the delegation to Kampala.

“I saw some children running after vehicles. Some were knocked by vehicles and got injuries. Others are knocked to death,” he says. “Some meet men, and they rape them. Some children are killed, and their bodies never found.”

As the anti-trafficking movement grows, the local government is also working to more closely monitor the movements of young people, Lomonyang says.

“We’re doing surveillance, too,” he says. “We stop buses and other vehicles, and when children are found traveling alone, they are quizzed on where they are going. Last week, we arrested one middle-woman who takes children to beg on the street.”

Families are learning to put up a fight when traffickers attempt to take their children. The traffickers who abscond with local children are beginning to be prosecuted too.

When Paul Loli’s daughter, Agnes Iiko, 15, was approached about working in western Uganda for 40,000 shillings ($10.78) per month, she refused. Later, several women came back and took her by force.

But when local residents found out, they went to the women’s house and brought Agnes back out. Still, the traffickers persisted.

“Until my uncle beat them and retained one woman at his house that night,” Agnes says, adding that the next morning, the case was reported and the woman was locked up. She is now serving a three-year jail term.

Ongicha says the next step to advance their efforts is a joint action plan with the district education department.

“We are employing two approaches. In schools, we educate both teachers and parents, if they come to school,” he says. The second part of the approach is asking parents to join community policing efforts.

It’s heartening to see the tide of public opinion changing, says Lele, who was once in favor of letting children work to support their families. But after the trip to Kampala, he says he has forever changed his mind.

“I thought they were better off going to beg in Kampala,” he says. Now he knows that’s not the case.