Skip to main content
The story you are reading was published on Sunday September 4, 2016. To read more recent stories click here. 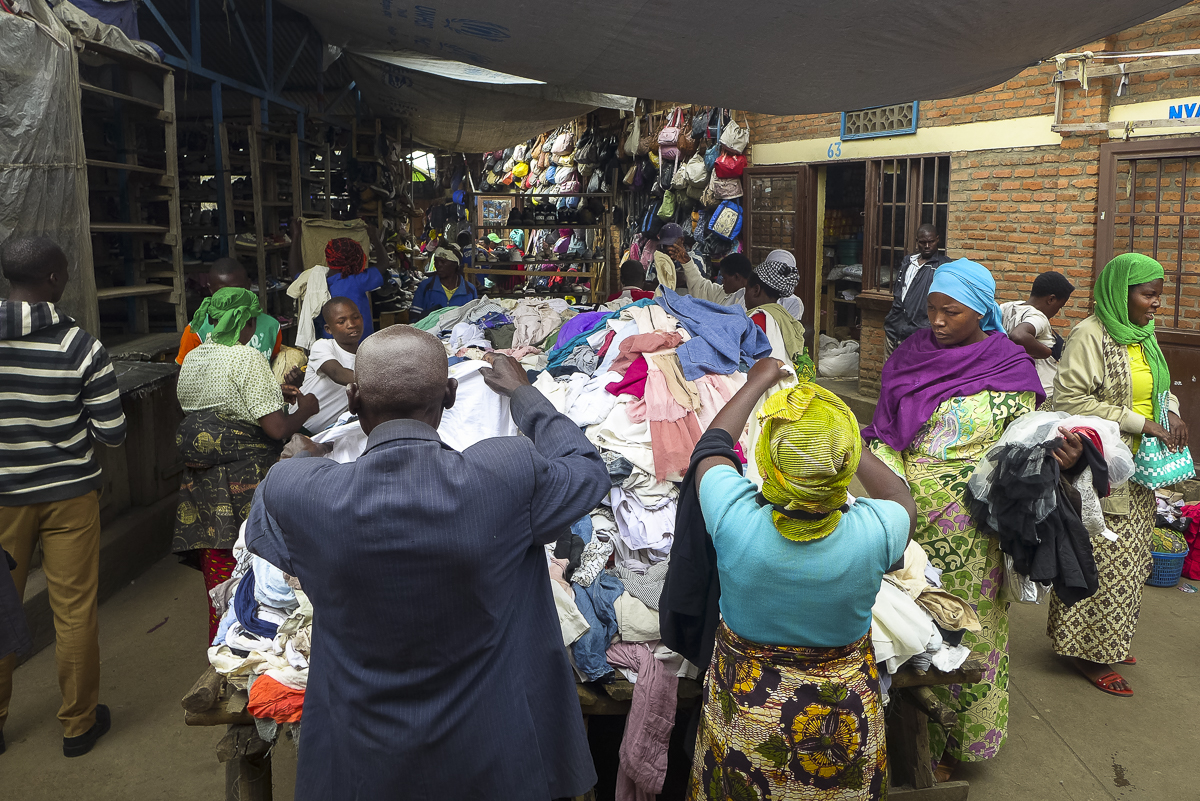 GISENYI, RWANDA — The main market in this border city is noisy by 6 a.m.

Men and women sit close to their meticulously organized stacks of secondhand clothes. Some hawk their wares with microphones or at the top of their lungs. Throughout the market, traders constantly open fresh bundles of used clothing, known locally as “caguwa,” a Swahili word that means “choose,” that have arrived here from Europe and the United States.

Previously worn skirts, dresses, women’s blouses, men’s socks, underpants, overalls for children, bodysuits for babies, baseball caps and warm jackets are all here. There are even towels, bedsheets and bedcovers for sale. The goods, though used, are good quality, customers say.

“Come here!” insists one vendor with a microphone. “With only 300 francs, you can choose beautiful clothes! Three hundred only!” 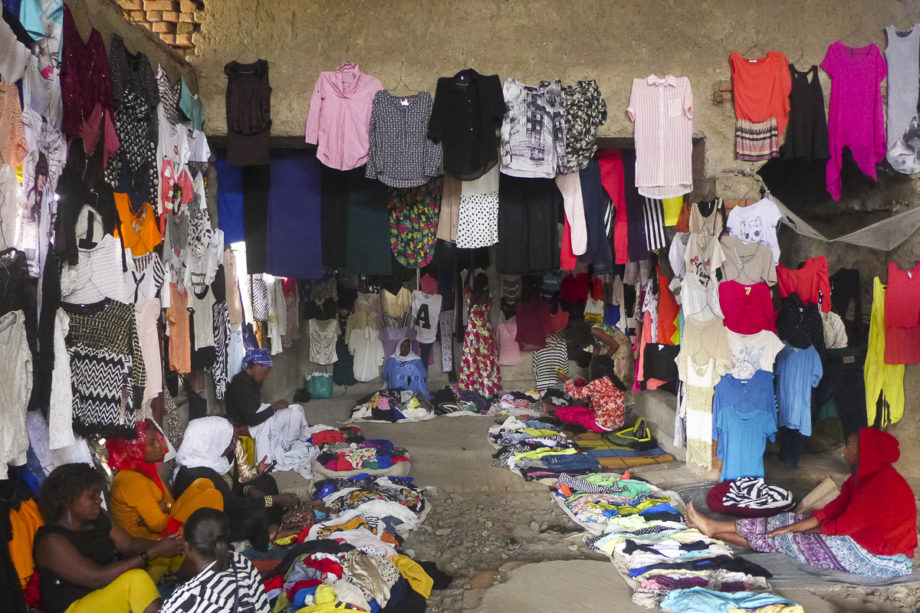 Secondhand clothes, known locally as caguwa, are sold in a “unama” market in Gisenyi, a Rwandan town near the border with Democratic Republic of Congo. Unama means “bend,” because customers bend over to examine the clothes for sale, which they say are of good quality at a cheap price.

For decades, secondhand clothing traders in Rwanda have relied on imported caguwa to eke out a living.

But new taxes on caguwa could push many sellers out of work, and an impending ban is set to end the industry in Rwanda entirely.

In June, the Rwandan government announced a 1,150 percent tax increase on used clothing and shoes intended to discourage people from buying or selling the secondhand goods. The taxes, which took effect in July 2016, were raised from $0.20 per kilogram to $2.50.

The all-out ban is scheduled to begin in 2019, as part of a new plan that seeks to promote domestic clothing and shoe factories. Rwanda was among East African countries, including Burundi, Uganda, Kenya and Tanzania, to agree to the ban, which was proposed in February at a meeting of the East African Community. The ban is intended to promote industrialization in East Africa, which is a major consumer of secondhand clothes.

Statistics on the number of people engaged in the secondhand clothing trade here are unavailable, but caguwa traders are abundant in nearly every market in the country. The secondhand clothes arrive in Rwanda via businesses and charities, including the Salvation Army and Oxfam. Clothes are separated according to size, type and quality, before being shipped around the world.

After the clothes arrive in-country, charities resell them to secondhand traders at low prices. 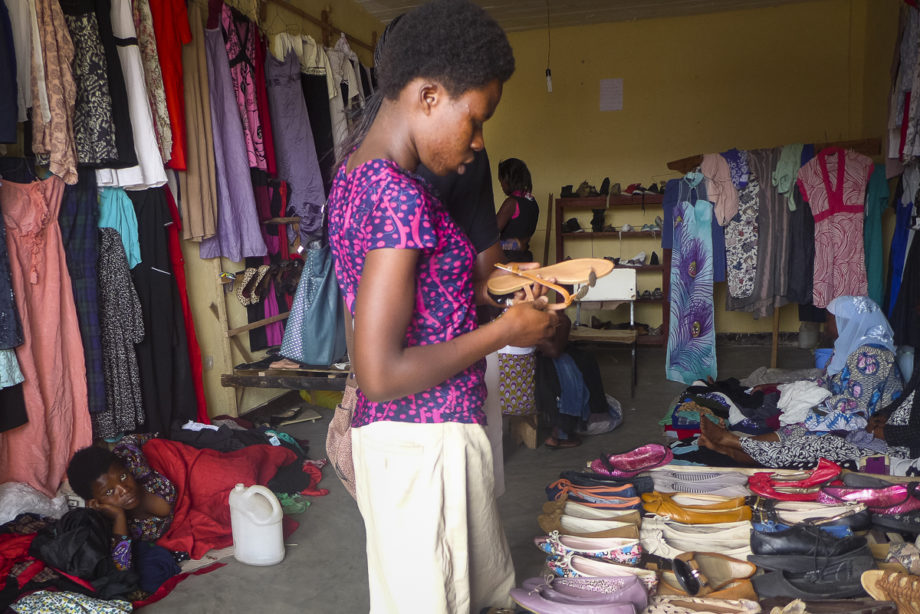 Caguwa traders say a tax increase and an impending ban on the clothes, which is scheduled to begin in 2019, will push many people into unemployment.

Rwanda’s unemployment rate is 3.4 percent, based on 2012 government data, up from 2.1 percent in 2006. Some analysts say that number is likely much higher. Regardless, caguwa traders say many more people will likely be unemployed if they’re forced out of that trade by the tax increase and, eventually, the ban.

Government officials, including Rwanda’s President Paul Kagame, have assured the population that they will create solutions to address the problem for the country’s current secondhand traders.

In addition to increasing the number of textile factories to create jobs, officials plan to reduce taxes for dressmakers and ensure that locally produced clothes are sold at affordable prices.

Still, Egide Imanizabayo, a 29-year-old married father of three, worries about his future.

“The sale of caguwa has always been my only means of survival,” he says. “It is thanks to this that I managed to buy a plot that I intended to build a house on, but if I can no longer do my business, my family and I will remain mired in misery.”

Jean Marie Vianney Ndahayo says the ban will shatter her dreams. He sells caguwa to pay his way through college.

“It is thanks to this business that I expected to make my dream of getting a bachelor’s degree come true,” he says.

He planned to enroll at the Gisenyi campus of Kigali Independent University, but “if the decision to ban caguwa is maintained, I would not be able to.”

The ban will also affect Rwanda’s poor, many of whom can’t afford new clothes.

“Normally a farmer can easily buy a shirt at 100 Rwandan francs [13 cents], but I strongly doubt that there would be a brand-new factory-made shirt selling at such a price,” Ndahayo says.

Meanwhile, dressmakers and fabric traders applaud the tax and the coming ban.

“When caguwa clothes are banned, we dressmakers will have a lot of customers, and our business will flourish more than ever before,” says Ghislain Gakuru, a dressmaker based in Gisenyi.

The ban will turn Rwandans toward self-reliance, says Esperance Uwineza, 26, who works in local government.

“It’s now time for us to wear clothes that have not been worn by other people,” she says. “I know many people are against the decision, but I very much admire it. This is a way for us to show the world that we want to move forward.”

But already some local traders have found ways to get around the tax by smuggling caguwa in from neighboring Democratic Republic of Congo. Female smugglers, known locally as “bacoracora,” say they have more clients now.

Mamy, a young coracora (the singular word for “smuggler”) who asked that her full name not be used for fear of running into legal trouble, says she’s recently added five clients, all caguwa traders in Gisenyi. They pay her to smuggle secondhand clothes from Goma, the capital of DRC’s North Kivu province, which borders Gisenyi, to avoid the taxes now collected in Rwanda.

“I woke up early this morning to travel into Goma to buy clothes at Virunga Market,” she says. “Then I smuggled them past the border.”

Smuggling caguwa into Rwanda will become impossible when the total ban takes effect, she says, but she still anticipates an increased income between now and then.

Fatuma Uwase, a 36-year-old mother of six, says she doesn’t understand why the government has targeted secondhand clothes. She’s sold used baby clothes at Mahoko Market in Gisenyi every day for the past eight years.

“For years, our parents, children and ourselves have been wearing secondhand clothing, and I’ve never heard anyone who died because of it,” she says.

Uwase’s income feeds her family and pays her children’s school fees. She says she hopes the government will reconsider its decision.

“I dearly hope, with all my heart and all my being, that the government can think again of the effects of the enforcement of its decision on us, the middle-class people,” Uwase says.