Skip to main content
The story you are reading was published on Tuesday May 30, 2017. To read more recent stories click here. 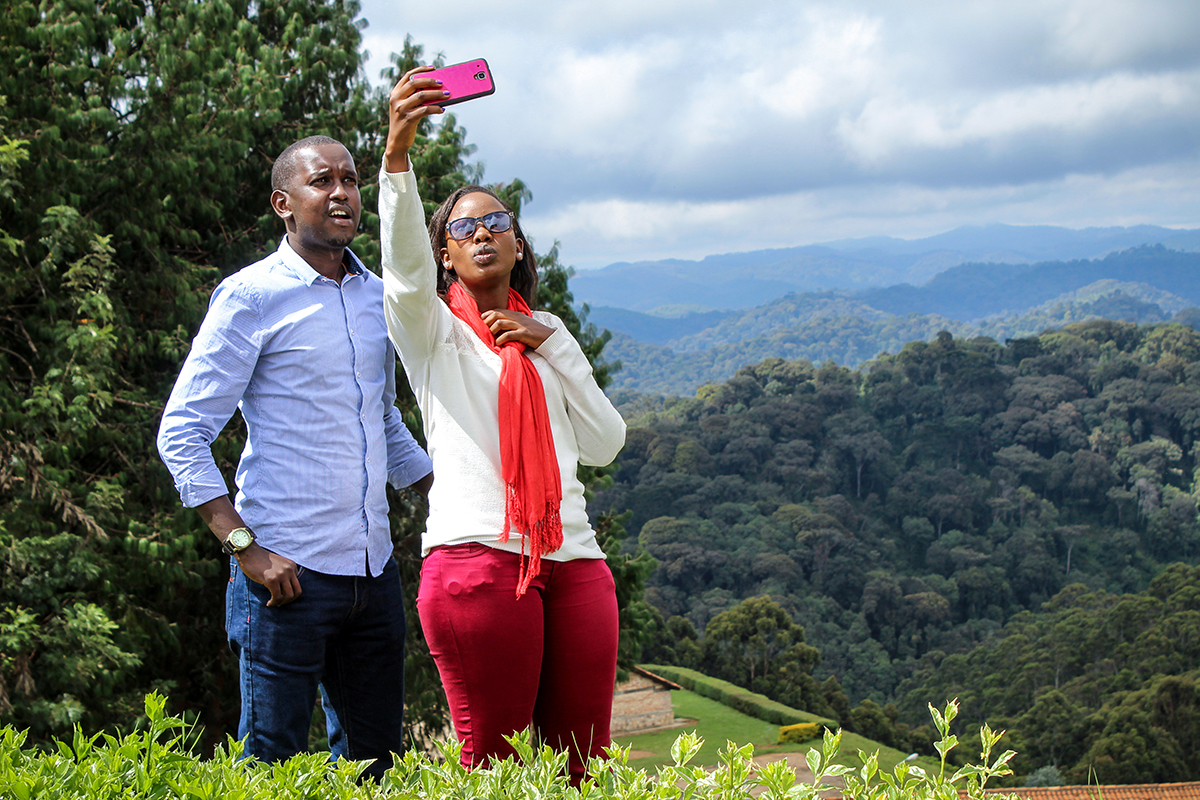 She travels by foot over the 200-meter-long (656-foot-long) canopy bridge constructed for tourists to better experience the depths of the famed Nyungwe National Park. Here, in Rwanda’s southwest corner, she might even catch a glimpse of the Ruwenzori colobus monkeys that run in groups through the park.

“Many people told me about this canopy, and it awakened my curiosity. So today I am very happy. When I was walking on the canopy I was feeling like a flying bird,” Aliyah says.

Aliyah is one of 35 young adults who gathered at 4:30 a.m. at the Wilson Tour Agency in Kigali, Rwanda’s capital, to make the four-hour journey to the park. They are part of a growing number of Rwandan tourists exploring internationally famous tourist sites in their own country, which is known as the Land of a Thousand Hills. 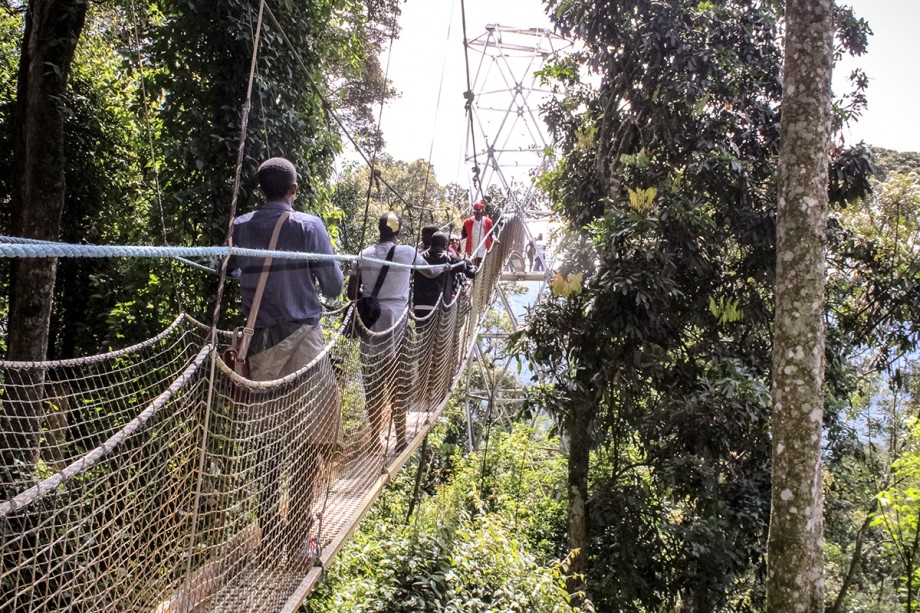 Visitors walk on the forest canopy bridge. They are encouraged to visit tourist sites by the government’s Tembera u Rwanda — Explore Rwanda — program, which discounts tours for Rwandans and East Africans.

Many Rwandans have viewed tourism as reserved for foreigners, but the Rwanda Development Board’s discounted tourism program is working to change that. The program, “Tembera u Rwanda,” Kinyarwanda for “Explore Rwanda,” encourages Rwandans and other East Africans to enjoy tourist activities such as tracking chimpanzees in Nyungwe, sighting mountain gorillas in Volcanoes National Park and hiking and biking the Congo-Nile Trail.

Under the program, the price of admission to Rwanda’s famous parks is lowered and tours are offered at a discount. To visit the Nyungwe National Park, for example, Rwandans and other East Africans pay a discounted rate of 35,000 Rwandan francs (about $40) – a bargain compared with the $130 that foreign tourists usually pay. This includes bus transportation, entrance fees, snacks, lunch and guides.

Tourism by Rwandans accounted for about 40 percent of the travel spending within their own country in 2016, up from 19 percent just two years ago in 2014, according to the World Travel and Tourism Council, an international industry advocacy group. The group expects domestic tourist spending to increase by another 8.7 percent in 2017 to 214 billion Rwandan francs ($255 million).

Overall, both domestic and international travelers’ total spending accounted for about 11 percent of Rwanda’s GDP in 2016, directly supporting 284,000 jobs or 9.7 percent of the country’s employment, the group says.

Emile Rugambwa, 35, a project engineer from Kigali, came to walk on the canopy but says he also learned many interesting facts about his country.

“Walking on the canopy was amazing, but to know the history of my country and to know medicine plants that were used by my ancestors was new and important to me,” Rugambwa says.

“This is a good thing to us,” she says. “We thought that visiting tourist sites is for White men who have a lot of money, but these days Rwandans begin changing their mind through this campaign.” 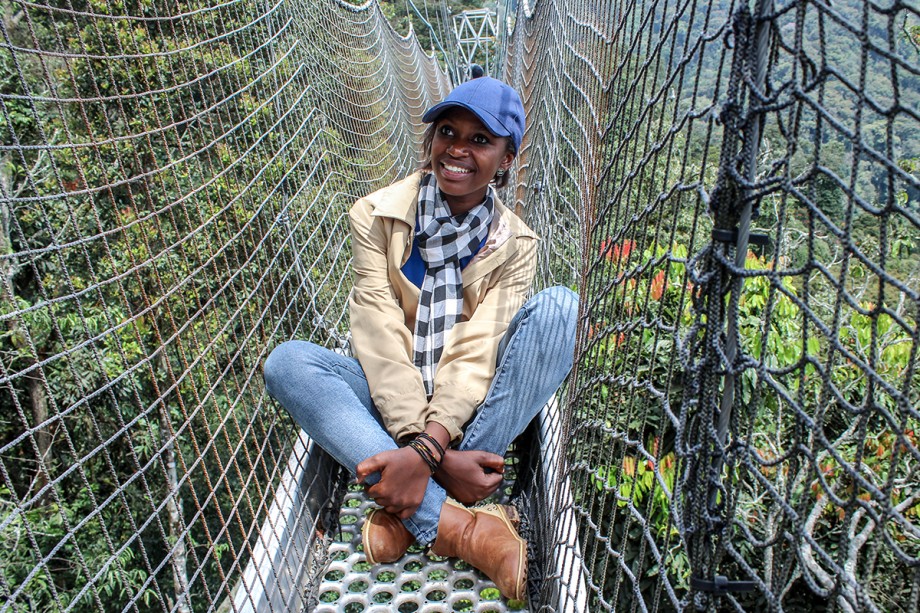 Mwaija Igiraneza, 24, sits on the canopy walk in Nyungwe National Park. She is one of the Rwandans who enjoy discounts at many Rwandan tourist sites as part of the government’s program to encourage tourism in the country.

Thierry Mugunga, 24, a student at Kigali Independent ULK University, encourages other Rwandans to know their country.

“It is not normal that foreigner tourists discover the beauty of our country before we do. Rwandans have to know their country and like it more,” Mugunga says.

Abdul Nshimiyimana, a tour guide at Wilson Tours in Kigali and a teacher of tourism and marketing in secondary school, says the Tembera u Rwanda program has awakened many Rwandans to the beauty of their homeland.

Before, it was difficult to convince Rwandans about the importance of visiting their own country, he says.

“Most of them could say that it’s a waste of time and money,” he says.

But since this program began the number of Rwandans who visit the park and other sites has increased, Nshimiyimana says.

“And we hope that it will get higher,” he adds.