Skip to main content
The story you are reading was published on Sunday September 27, 2015. To read more recent stories click here. 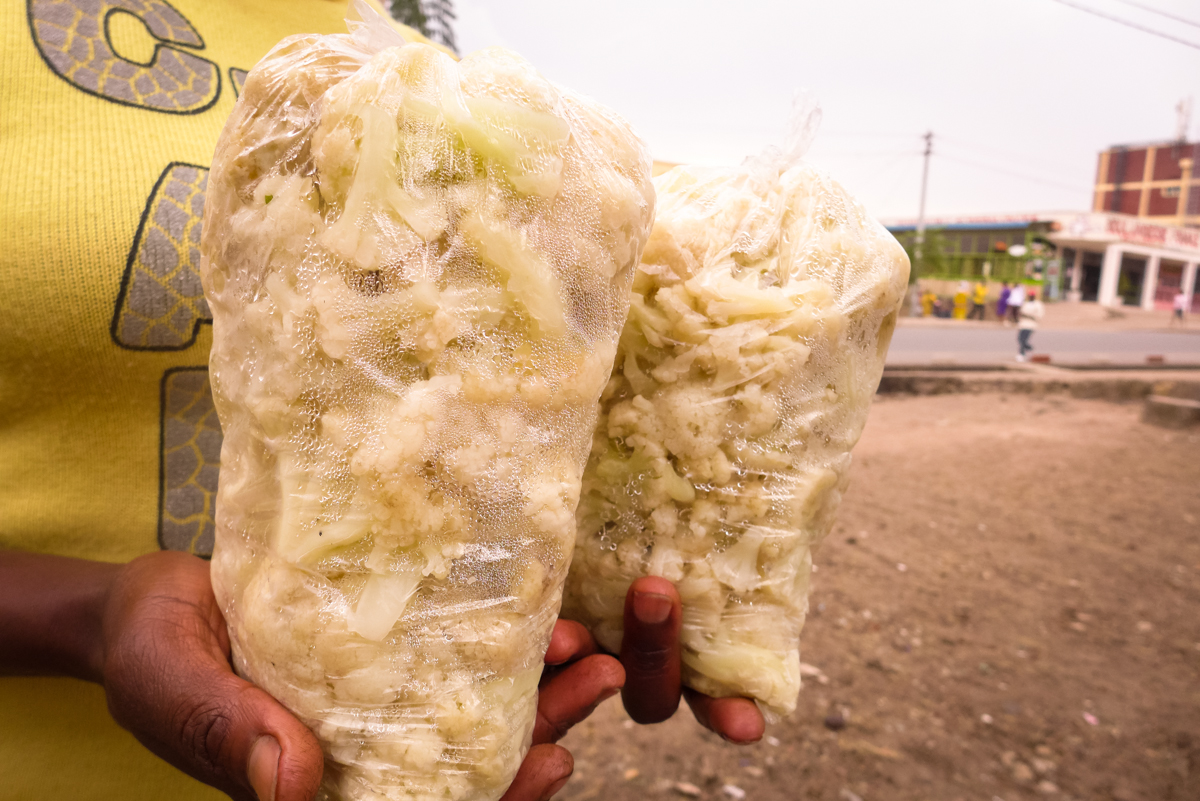 GISENYI, RWANDA ­­­— For Shanga, 34, a workday starts with a walk toward Rwanda’s border with the Democratic Republic of Congo. As she approaches the checkpoint, she looks in her bag to ensure that she has her identity card, needed to cross over into DRC. She ties a scarf around her head and calls her clients to take their orders.

Shanga is a smuggler – known locally as a coracora. Once in Goma, the capital of DRC’s North Kivu province, she stocks up on powdered milk and Johnnie Walker liquor, among other types of alcohol. Those items are legal to buy, but she purchases them in DRC, where they’re tax-free, unlike under Rwanda’s stricter government.

But the riskiest items on her list are plastic bags. They’re illegal in Rwanda, and people caught selling them can face fines.

“If any of my clients needs plastic bags, I know how to get them,” says Shanga, a single mother of three who asked that her last name not be used.

It’s been illegal to import or manufacture certain types of thin plastic bags in Rwanda since 2004. In 2008, the government banned the manufacture, sale, import and use of all polythene bags. 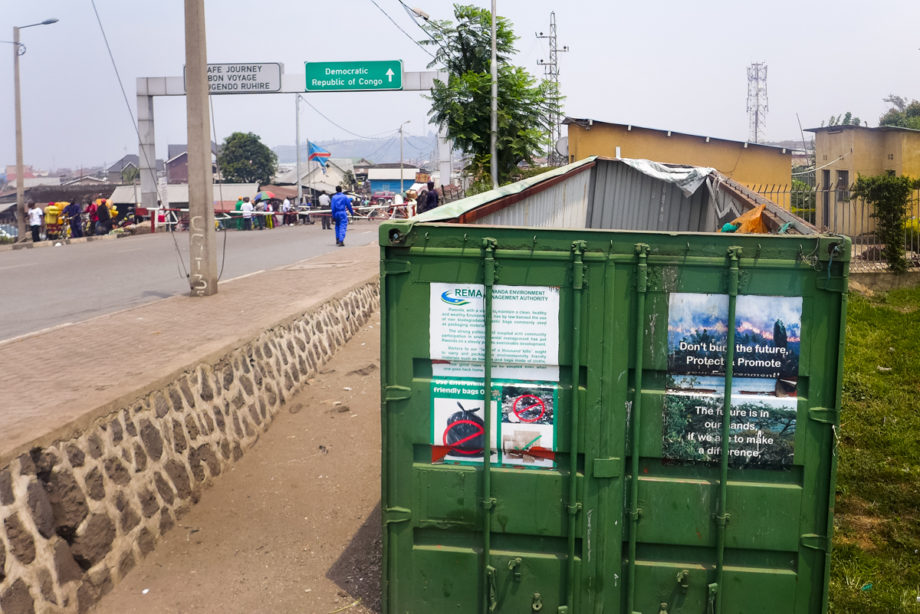 At the border between Gisenyi, Rwanda, and Goma, Democratic Republic of Congo, people entering Rwanda are told to discard any plastic bags they’re carrying into a bin.

The Rwandan government enacted the law to protect the environment, clean up cities and prevent flooding during the rainy season. Plastic bags contribute to clogged drainage systems.

The country has earned international accolades for its conservation policies. In 2008, Kigali, the capital, won the prestigious U.N. Habitat Scroll of Honor award for cleanliness, zero tolerance of plastic bags and crime reduction.

After the ban, some plastic-bag manufacturers restructured their business models toward recycling or production of biodegradable bags, according to a 2014 report on issues with single-use plastic bags from the Western Australian Local Government Association. Community-based organizations were established to make bags from environmentally friendly materials.

But some still prefer plastic bags. Alternatives such as paper bags are expensive – more than double the cost of plastic bags in some cases – and aren’t suitable for carrying small items or liquids, such as cooking oil. The demand for plastic bags has made it difficult for police, who search for the bags at the border, and other officials to stop their flow into Rwanda.

In neighboring DRC, the manufacture, sale and use of plastic bags is legal. Thanks to a porous border, Shanga and other smugglers say it’s not hard to move them into Rwanda, particularly for women.

“Most of the bacoracora are women, and they sometimes hide plastic bags in their innerwear,” says Mberabagabo Egide, a REMA supervising officer at La Petite Barrière, a border post on the Gisenyi-Goma border, using the plural form of coracora. “No one can discover that they are hiding something.”

“Most of the bacoracora are women, and they sometimes hide plastic bags in their innerwear.” - Mberabagabo Egide, a REMA supervising officer at La Petite Barrière, a border post on the Gisenyi-Goma border

Whenever police officers suspect that a woman is carrying contraband, they request a female officer to conduct a secondary search in which the suspect is required to undress, Egide says.

Still, he acknowledges that some smugglers manage to cross into Rwanda with plastic bags.

“Plastic bags are very thin, which makes them easy to hide,” he says.

On some days, Shanga hides a pack of 50 or 100 bags in her long, loose dress. She often uses illegal footpaths to walk back into Rwanda.

The risks pay off: Shanga says she earns half her income by selling plastic bags. On a typical day, Shanga brings in 3,000 Rwandan francs ($4.23) from selling bags, she says. The average annual income in Rwanda is $700.

She’s saving money, she says, to start a legal business.

Despite the smuggling, Rwanda’s law has made a visible difference. Just over the border in Goma, trash and plastic bags litter the streets. But on the Rwandan side of the border, litter of any kind is a rare sight. A large bin stands at the entrance to Rwanda, and visitors are required to dump all plastic bags there.

Officials from the Rwanda Environment Management Authority say they routinely confiscate plastic bags from smugglers at the Goma-Gisenyi border. Smugglers say arrests at the formal border are rare. REMA authorities say they do not keep statistics on the frequency of confiscation or arrest.

Rwandan border police wielding sticks have been known to chase smugglers down on bushy footpaths, according to Dada, a smuggler who asked to be identified by just one name. Confiscation, arrests and beatings also occur on the illegal paths, she says.

But the risks don’t deter her.

“We are used to the challenges,” she says. “One day we lose; another day we gain – that is how our life is.”

Dada says she’s smuggled bags for three years. During that time she says she’s been detained just once, in January, when police at La Petite Barrière caught her with plastic bags. She wasn’t arrested or fined, but she was forced to shred every bag she carried.

“I stayed at La Petite Barrière border for hours shredding the bags, one by one, until I finished them,” Dada says. “I was asked to throw them into the dustbin, and I was then released.”

Dada, who lives alone, says she was working as a housemaid when a neighbor suggested she smuggle bags.

“She told me that I could be self-sufficient if I became a coracora like her,” Dada says.

The business is built on relationships. Buyers go through people they know, and smugglers work only with clients they trust.

“I don’t trust everyone,” Dada says. “Many of my friends have been discovered, and today they cannot hide anything because everyone at the border knows them.”

Dada says she’s smuggled bags for three years. During that time she says she’s been detained just once, in January, when police at La Petite Barrière caught her with plastic bags. She wasn’t arrested or fined, but she was forced to shred every bag she carried.

Smugglers aren’t the only ones selling the illegal bags in Rwanda. Shop owners near the border package goods for their customers in plastic bags they get from smugglers.

Kazungu, a grocery store owner in Gisenyi who also asked to be identified by one name, says he sells thin plastic bags in addition to using them to package other items.

“Many of my clients like to transport things in plastic bags,” he says. “Like for example, if someone needs oil and they do not have a container, I serve them in a plastic bag.”

“When someone needs plastic bags, they can easily buy them from bacoracora,” he says.

REMA officials say they are trying to educate the public about the negative consequences of plastic bags to discourage people from using the products, Egide says.

“We always show them the difference between Rwanda and DRC when it comes to cleanliness,” he says. “Some understand, but others don’t care.”