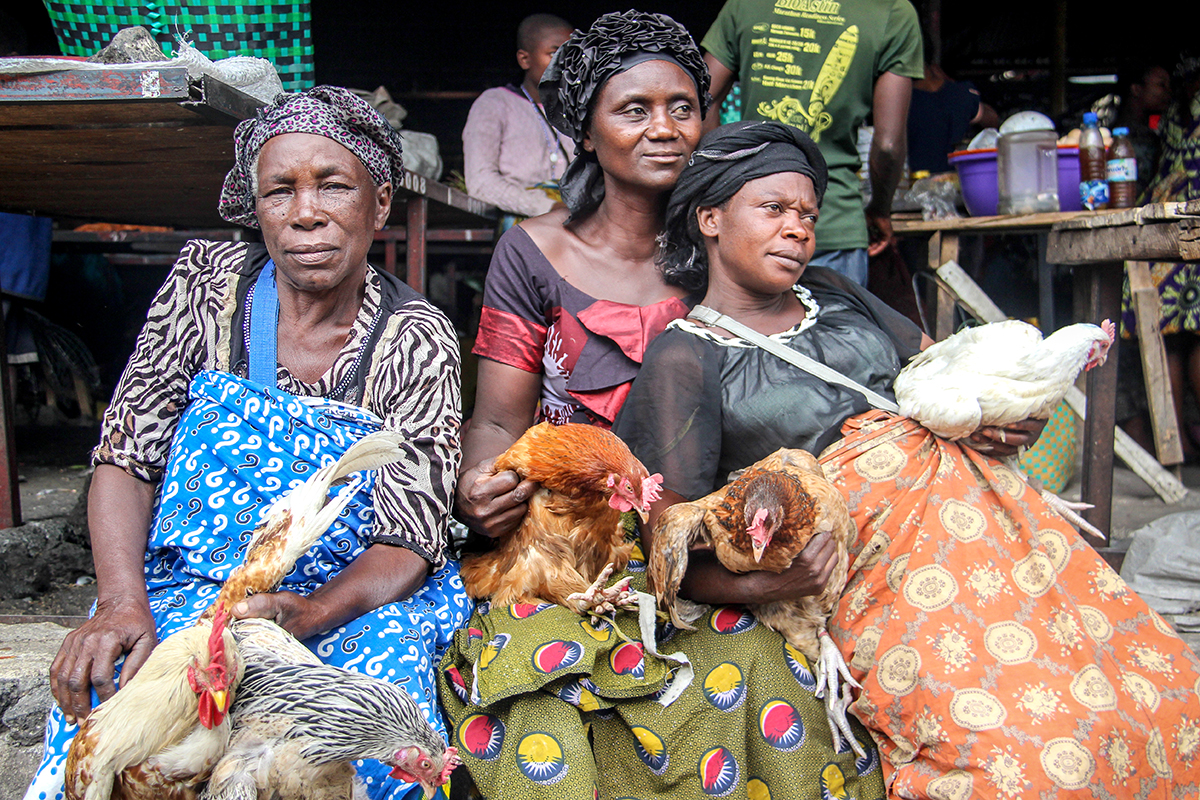 GISENYI, RWANDA — It’s 6:30 a.m. and a cacophony of clucks and squawks fill the air as the gate of a large enclosure is opened wide. The coop, situated near La Petite Barrière, one of two checkpoints between Rwanda and the Democratic Republic of Congo, belongs to chicken trader Shakira Muhawenimana.

Only a few customers show up today just outside the enclosure. They carry live chickens in their arms and haggle with Muhawenimana over chicken prices. Usually prices are called out in Swahili, as typically most of Muhawenimana’s customers are Congolese in this border trading town. But today, most of the prices are called out in Kinyarwanda, Rwanda’s official language.

With bird flu striking the poultry industry in nearby Uganda in January, the governor of DRC’s North Kivu province in March imposed a ban on poultry and egg imports not only from Uganda, but from Rwanda as well.

Rwanda and Kenya, trying to avoid the deadly respiratory disease that kills birds, banned Ugandan chicken and egg imports earlier in January after large numbers of wild terns were found dead at Lutembe Beach on Lake Victoria near Entebbe, Uganda.

The finding was frightening because the disease kills humans as well. According to the World Health Organization, it has killed about 60 percent of humans who have contracted the virus.

Bird flu is not new in Africa, and many nations reporting outbreaks are working to limit contamination by destroying flocks and taking other containment measures. In May, the DRC reported ducks at Lake Albert died of the disease and in June, an outbreak was reported at a large poultry farm east of Harare, Zimbabwe’s capital. 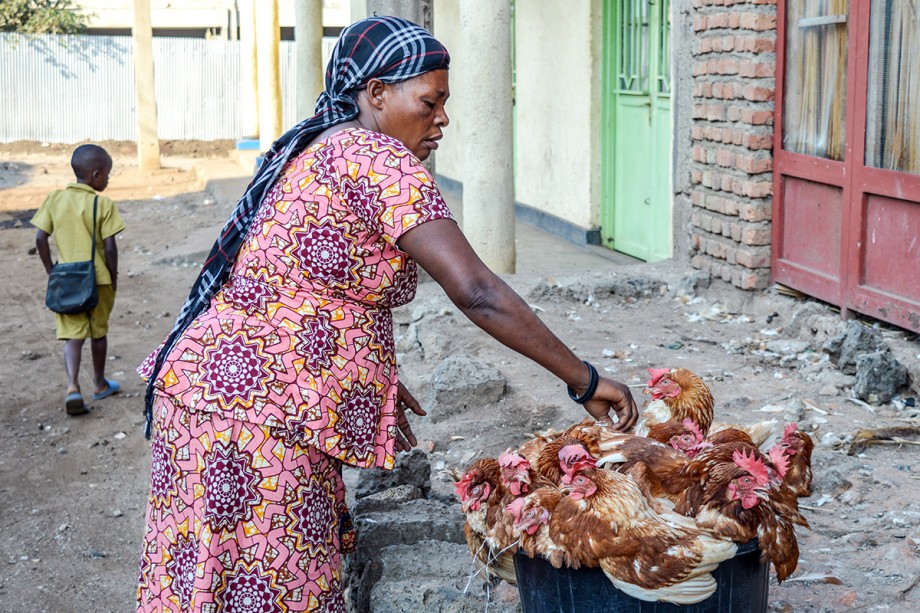 Chantal Tchiriza, a chicken seller in the Gisenyi Sector of Rwanda’s Rubavu district near the DRC-Rwanda border, puts her chickens in a basin to easily transport them to her clients.

Faced with dwindling income, chicken merchants and farmers in nations that have experienced lengthy bans are feeling the pinch.

In Rwanda, Muhawenimana, a 38-year-old mother of five, appeals to the government to find an expeditious solution.

“They’ve made my main sources of income dry up like I’ve never seen before,” she says.

So far, Rwanda, which generally imported about 50,000 chicks and 100 tons of eggs from Uganda each month before the ban, hasn’t detected cases of bird flu.

“Today, I sell for a whole week chickens that I could sell in a day,” says Yvette Mutimutuje, a 30-year-old chicken trader.

David Sentama, 40, has been selling eggs in Gisenyi for six years. There’s a stench coming from his storeroom – the unpleasant odor of a bucketful of rotten eggs. He says normally he would sell 3,000 eggs per day, but now sells only 800 to 900.

“There is a need to find a way out of this uncomfortable situation. Otherwise, we will be forced to go out of business,” he says.

“I see my chickens dying of old age every day, making my business near worthless. This is the reality we’re facing today,” she says.

Issa Masumbuko, 38, president of a local poultry merchants’ cooperative in Gisenyi, says cooperative members initially believed that the ban on poultry imports to the DRC wouldn’t turn into a lengthy one.

“Four months is far too long for us. We have no idea how long the ban will last,” Masumbuko says. “We’ve closed shop, and we continue to pay taxes, and rents. We’re locked into dilemma which suggests the question: Shall we give up on our business or not?”

This map marks recorded outbreaks of bird flu in Africa. Click on each location to learn more. Source: ProMED-mail

Authorities urge chicken traders to not give up their businesses until a solution to the problem is found.

“We had meetings with district authorities but nothing productive has come of them. We are always told that they are negotiating with the authorities in Goma, and we are still waiting,” Masumbuko says.

In Goma, a city close to the border with Rwanda, live chicken and egg supplies from Rwanda that used to flood the market have dwindled to a trickle, resulting in skyrocketing poultry prices. A chicken that would have cost $10 two months ago now sells for $15 or $17.

Though the prices for chickens in Goma, the capital of North Kivu province, have increased, business overall is down.

“Every single product I sell is usually imported from Uganda via Rwanda,” says Mambo Bujiriri, a livestock farmer in Goma’s Kahembe neighborhood. “How do you expect me to afford to pay school fees for my kids if the current situation remains unchanged?”

While many who sell chickens and eggs have pulled out of the market for now in Goma, others have engaged in smuggling, locally referred to as “chora chora” in Swahili, meaning “to bypass.” They bring poultry products into DRC via Biréré, Goma’s neighborhood bordering Rwanda, by circumventing border checks.

“Sometimes we hide a few chickens in our loincloths when crossing La Petite Barrière,” says Keza Uwamaliya, a Goma trader who sells chickens from Rwanda. “Some chickens never survive the smuggling route and others stay alive and are brought into Goma despite the ban on poultry imports. We accept such a risk because we have no other choice if we want to survive.”

La Grande Barrière and La Petite Barrière are among the checkpoints at which authorities maintain strong controls to crack down on poultry smuggling between DRC and neighboring countries. If a Congolese customer tries to sidestep the ban and is caught, the chickens are impounded in DRC by the hygiene and health authorities, quickly slaughtered, burned and buried to keep the population safe.

Dr. Adrien Katsomya, head of the animal production and health division in North Kivu, says authorities are looking into ways to expedite efforts to possibly re-open borders to poultry imports from Rwanda.

Meanwhile, now that it has been months since bird flu was first detected in Uganda, Vincent Bamulangaki Ssempijja, Uganda’s Minister of Agriculture, Animal Industry and Fisheries, says the epidemic is over.

“All steps have been taken. It’s already controlled. There is no bird flu in the country,” he says, adding that the outbreak and the bans against Ugandan chicken imports by other nations ended in “a big loss generally” for Ugandan farmers and traders. 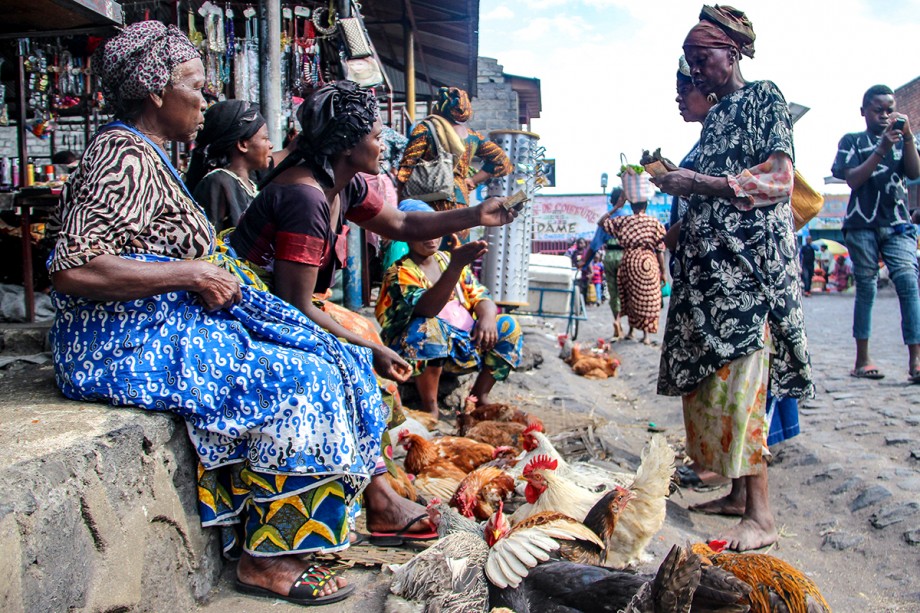 Kahindo Kwiraviwe sells live chickens at the Alanine Market in Goma, Democratic Republic of Congo. Chicken prices in North Kivu province have climbed since bird flu outbreaks have occurred in the region.

Uday Reddy, a poultry exporter in Uganda, says losses have been devastating.

“For five months, we have not been able to export,” he says.

Peter Ssenkungu, executive secretary of the Poultry Association of Uganda, estimates Ugandan businesses have lost some 5 billion shillings (nearly $6 million) as of early June, due to their inability to export breeders, chicks and chicken meat alone.

Ssenkungu says poultry farmers have been meeting with Uganda’s agriculture ministry and the relevant ministry in neighboring Kenya to alleviate this situation.

So far officials from Kenya have come to inspect specific poultry farms in Uganda to ascertain that they do not have the epidemic, Ssenkungu says. Hopefully, he adds, in a few weeks the farms that have been inspected will be allowed to start exporting poultry again.