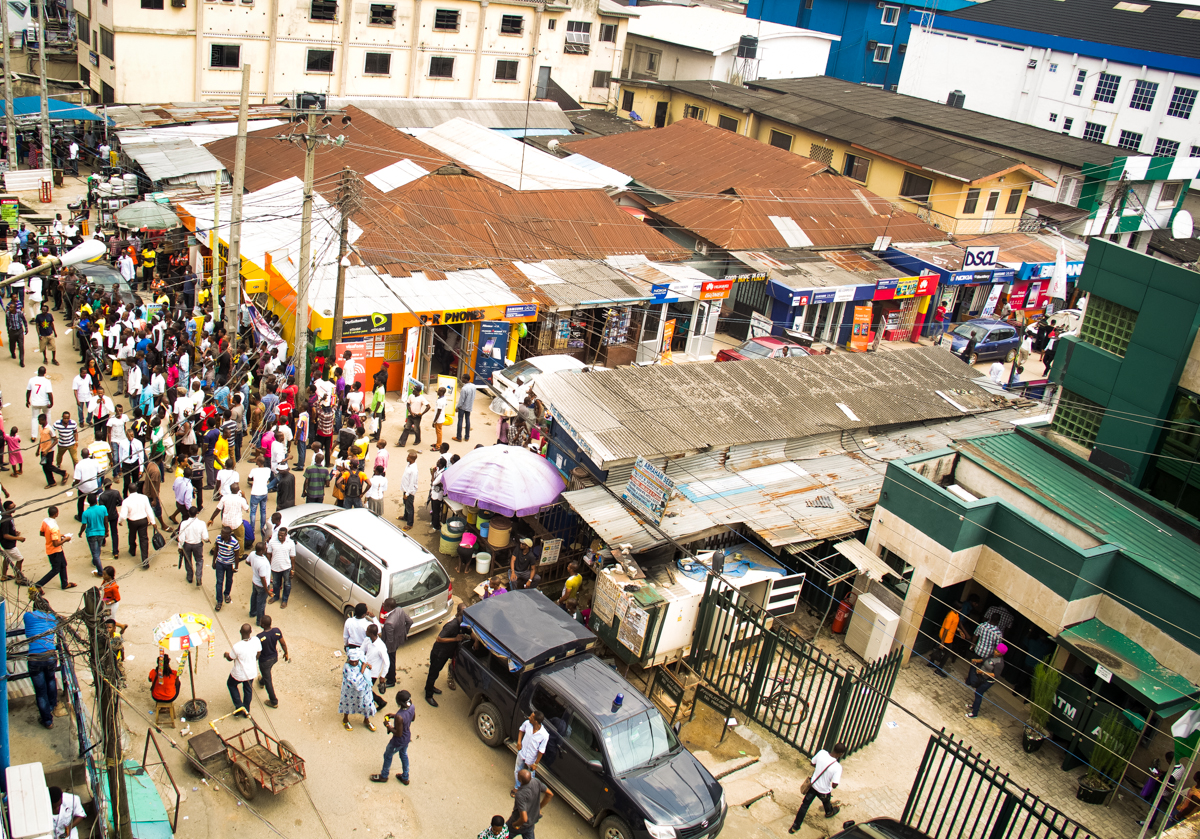 LAGOS, NIGERIA – Adeola Adeogun sits on a small stool before a rectangle of show glass displaying phones for sale. Adeogun sells all kinds of used and refurbished phones and other tech items in Lagos, Nigeria’s most populous city.

“I do not sell laptops, but I sell laptops,” he says with a sly smile. “If anyone needs these things, I can get it for them and make my profit on it.”

Adeogun, owner of Triple A Communications, buys merchandise from former owners, other shop owners, and wholesalers.

Middlemen call out to passersby, asking if they want to buy or swap phones.

Some hold arrays of phones; others offer earphones, flash drives and other accessories from hangers. Some tote small boxes of (mostly pirated) software CDs. Some simply call out to potential buyers before they melt into the crowd.

Adeogun, 36, started out as a middleman seven years ago, just after he lost his job as a marketer.

Starting a business at the Computer Village is easy, he says. He did not need to register his business. He didn’t even need a shop. He needed only his marketing skills.

The Computer Village provides employment for thousands of youths. Because one can start a business with a little bit of capital, the market attracts a lot of entrepreneurs.

Some economists see the hub as adding value to Nigeria’s economy. Others say it does not reduce unemployment much because it doesn’t produce anything; the market simply trades in goods manufactured in other countries.

A plan to relocate the market is causing jitters in the village. Business people fear a drop in trade.

Unemployment among working-age Nigerians doubled from 12 percent in 2006 to 24 percent in 2011, according to the World Bank’s 2013 Nigeria Economic Report. The World Bank used data from the Nigeria National Bureau of Statistics, which has temporarily ceased publishing unemployment figures.

Nigerians from 15 to 35 – who account for nearly 40 percent of the population – have turned to self-employment in informal markets such as the Computer Village.

The trading hub has provided job opportunities for more than 50,000 youths, says John Oboro, an executive member of the Computer and Allied Products Dealers Association of Nigeria, or CAPDAN, a union of organizations operating in the hub.

“There is no ministry in the government sector that has that kind of employment, unless they are ghost workers,” Oboro says.

Since the market is unregulated, it is hard to tell how many people own shops, vend from stands and hawk merchandise on foot.

The village helps relieve unemployment, says Suraj Oyewale, an economist and founder of JarusHub, a website that provides career guidance to young Nigerians.

Thousands of youths run businesses in the village, adding to the economy, Oyewale says.

“A good number of activities that go on in the Computer Village are legitimate, open-market transactions,” Oyewale says. “These are jobs for these folks. There are bad eggs that sell fake and counterfeit products, but overall, I think the contribution is a net positive.”

The Computer Village was largely a residential area until about 1995, when tech-savvy traders started cloning and selling computers there, says former resident Alhaji Taiwo Musa.

Musa lived in the district until 2009, by which time he says traffic congestion and business activity had made the area uninhabitable.

The district’s nearness to Murtala Muhammed International Airport favored the technology trade, as most of the merchandise is imported, he says.

As the number of businesses has multiplied, Computer Village has drawn a steady flow of buyers and traders.

Increased traffic has in turn helped non-tech businesses thrive in the village and adjoining areas: Boutiques line the road to the village; shoe sellers display their wares from car trunks; and vendors sell snacks from carts and boiled corn from wheelbarrows. Hair salons and betting shops also flourish in the village.

Gbenga Sodimu, 42, sells phones and laptops in the Computer Village.

Sodimu started working in the area in 2010 after he lost his job as a customer service executive.

While Sodimu was employed, he bought tech devices at the Computer Village for resale to colleagues. When he became unemployed, he decided to scale up his enterprise.

The Computer Village has provided many jobs for many people like him, Sodimu says.

The trade in refurbished phones thrives because of its wide profit margin, he says.

The trade in refurbished phones has spawned a raft of repair shops.

Jackson Emmanuel, a 20-year-old computer systems engineer apprentice, repairs tech devices in the village as he awaits admission to university.

“I repair phones, I repair laptops,” he says. “If your laptop cannot be fixed here in the village, I am not sure where else it can be fixed.”

Although the Computer Village is widely perceived as creating employment, economist Tope Fasua questions its value. Nigeria’s economy depends too much on trade and not enough on production, says Fasua, CEO of Global Analytics Consulting.

“If you look at it, most of the country is into trading,” Fasua says. “We are just a consuming country; we are not producing. There is no substance to the economy. No one should depend on the Computer Village for employment figures because it is a bubble that can burst anytime.”

If Nigeria focuses on production, young people will be able to work in factories instead of being limited to selling, he says.

Fellow economist Oyewale disagrees. Products do not have to be locally produced to add value to the economy, he says.

“More organized markets, like modern shopping malls in high-end Lagos business districts, do not manufacture the wares they sell either,” he says. “The Computer Village provides an avenue to trade used products and make decent money from them.”

However, plans are afoot to relocate the market.

The bustling trade has outgrown the village, says Oboro, the representative of the products dealers union, CAPDAN. In 2005 the union proposed relocation of the hub to Katangora market, a secondhand clothes-trading area 10 kilometers (6 miles) away.

“This place has become too small for the kind of work that is happening here,” he says.

The Lagos State Government accepted the proposal, but the plan did not take off.

Last year, the government and CAPDAN renewed their decision. They have not set a date for the relocation, Oboro says.

Efforts to obtain comment on the matter from the government were unsuccessful. Officials did not respond to two letters and several emails sent by GPJ requesting comment.

Computer Village traders worry their business will drop off when the market is relocated.

“There are customers who already know us here,” Adeogun says. “If they move us, it will be difficult for them to find us.”

However, Oboro says relocation will improve business and the economy. The new marketplace will be well-planned and better-organized, he says. It will have parking lots, eliminating traffic congestion. And government data on people doing business there will be available to organizations like CAPDAN.

“It means development and expansion – not to the pilots of the project, not to Lagos state alone, but to Nigeria as a whole,” he says.

This story was supported by a grant from the African Story Challenge, a project of the African Media Initiative.