Skip to main content
The story you are reading was published on Friday February 13, 2015. To read more recent stories click here. 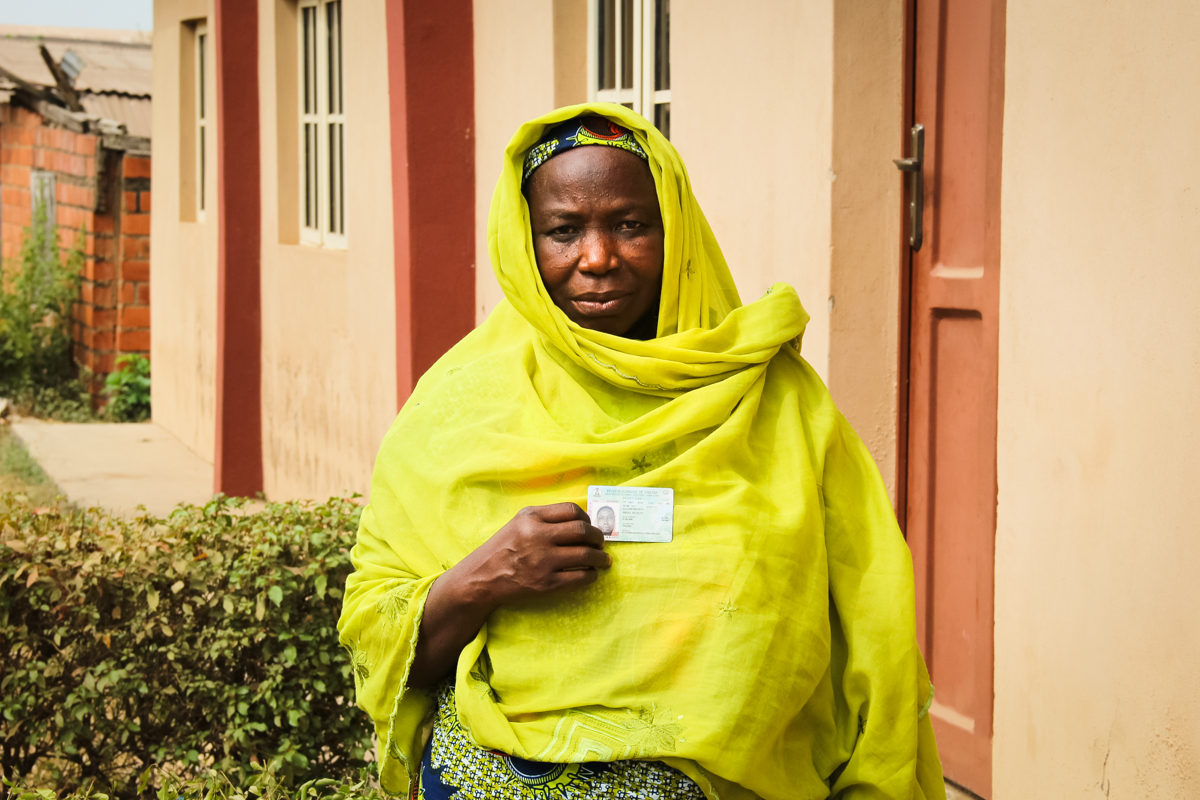 Despite missing work repeatedly to get her documents in order, she still doesn’t have a Permanent Voter Card, or PVC, a new form of identification required to cast a ballot in Nigeria.

Alonge offers photocopying and typing services in Ibadan, Nigeria’s third-most populous city and capital of the state of Oyo. Time away from the operation costs her money, she says.

After hearing a radio announcement that the PVCs were ready for collection, Alonge went to Ibadan North Local Government office to pick hers up. An electoral officer there told her that cards with names starting with “A” had been mixed up with all of the other cards.

Alonge gave the officer her phone number and waited for word that her card had been found. But that call never came, she says.

Worried she might miss her chance to vote in the election, originally scheduled for Feb. 14, she returned to the office in mid-January. She was told to go to her polling unit.

“They saw my name and picture on the register,” Alonge says. “They checked their nylon bags. They said the same thing officials at the local government office had said – the letter ‘A’ had mixed up with the other letters.”

As of mid-February, Alonge still didn’t have her PVC.

Amid armed conflict in the northeastern part of the country, the body responsible for overseeing the election has given itself more time to rectify shortcomings in the registration procedure.

Boko Haram, a militant extremist group that aims to overthrow the government and establish an Islamist state, is committing a wave of abductions and killings.

With Nigeria’s armed forces temporarily focused on putting down the insurgency, the country’s Independent National Electoral Commission, or INEC, delayed the election to ensure voter security.

INEC announced Feb. 7 that the election would be postponed by six weeks. Voters will cast ballots for the president and National Assembly on March 28. State elections are scheduled for April 11.

The electoral commission also has extended the deadline for collecting PVCs. The new deadline is March 8, INEC announced Feb. 10 on its Twitter feed. As of Feb. 12, the commission had not posted the extension on its website.

Even with the delays, many voters worry they won’t get to vote because their cards have been lost, their names are not on the Nigeria Electoral Register, or they haven’t been able to transfer their cards after moving to new states.

These problems have arisen because this is the first time Nigeria has issued PVCs, according to the election commission. INEC promises more people will get their cards before the elections.

“We’ll endeavor to use the period of the extension to keep on perfecting our systems and processes for conducting the best elections in Nigeria’s history,” INEC Chairman Attahiru Jega says in the February press release. “In particular, we believe that we would resolve all outstanding issues related to non-collection of PVCs, which agitate the minds of many Nigerians.”

The design and production of the card will help ensure fair elections, Akeju says.

“You cannot clone it, you cannot transfer it,” he says. “If you get sick during elections, your wife cannot vote on your behalf. Things like that, one has to guard against.”

At the polls, an accreditation exercise will be conducted before ballots are cast. A card reader will scan each PVC to ensure that the bearer is registered to vote.

A series of challenges has disrupted the distribution of PVCs.

After the April 2011 elections, the electoral commission eliminated duplicate voter registrations. During that process, some voters were erroneously removed from the register.

In 2014, the government launched the Continuous Voter Registration, or CVR, program to re-register those people. Voters were required to check their status at their polling units and register afresh if their names were missing from the register.

In Oyo state, the update procedure was conducted in August.

As of Feb. 5, voters had collected almost 67 percent of the PVCs, the commission reported. The country has nearly 70 million registered voters.

Oyo state had received about 90 percent of the cards issued to its voters by the end of 2014, according to the commission. But as of late January, it had distributed only about 54 percent of them.

Nigeria holds general elections every four years. Two elections – one for the president and members of National Assembly and another for governors and representatives to state assemblies – are held two weeks apart.

One election watchdog attributes the distribution delay in part to poor staffing at polling centers.

Gboyega Tokunbo, volunteer coordinator of the Oyo unit of Youth Initiative for Advocacy Growth & Advancement, a civil society organization accredited to observe the elections, saw firsthand why many voters are frustrated when he monitored the CVR and the distribution of PVCs in four areas of Ibadan.

“Some of the electoral officers come late,” he says. “Sometimes, they don’t even come at all.”

Some would-be voters are feeling worn down by the bungling.

Since the dissemination of the new cards began, civil servant Yomi Adediji has repeatedly walked to an election commission office in Ibadan to collect his PVC.

On his seventh visit, he was told his PVC was ready, he says. But when the electoral officer compared Adediji’s old temporary card with its replacement, he said there was a problem and he could not release the card. He told Adediji to return at a later date to pick it up, but Adediji was traveling that day and unable to visit the office.

“A country that is over 50, yet we are having problems organizing elections,” he says.

Despite his disappointment, Adediji says he will continue trying to obtain his PVC.

Voter Wosilat Aminu, 60, was finally rewarded for her wait on Jan. 21.

In the same room where Adediji was turned away, Aminu showed an electoral officer the temporary voter card she used in the last election. To her relief, the officer found her PVC after searching through sheets of paper in brown envelopes.

It was not Aminu’s first visit to the office.

Aminu says her quest to get her PVC took a toll. Two days of motorbike transportation cost her 500 naira ($2.55). The trips also caused her severe discomfort, she says, pointing to her right leg.

Nevertheless, she is determined to vote.

“I have to vote by God’s grace, may I not die,” she says with a tired smile.

People who were unaware of the requirements of the CVR may be locked out of the election.

Chubby Chijioke Ewim is one such voter. Ewim knew he would need to turn in his temporary voter card when he picked up his PVC upon its arrival, but he did not know he needed to check his registration status in August.

Ewim traveled to Burkina Faso on business in September. When he returned to Nigeria in January, officials at his polling unit informed him that his name had been removed from the register in the purge and that he had failed to re-register during the window of opportunity.

Since registration has closed, he has no hope of voting.

Voters who failed to transfer their registration cards after relocating also will be locked out of the election.

After Opeyemi Salami-Agbejule married and moved to Oyo state in 2013, she did not transfer her voter card within the stipulated time. She will not be able to vote in this election.

“I did not hear about the transfer of cards on time,” she says. “There is no structure in place for information dissemination.”

“Yes, they used the media – radio, television and newspapers – but that is not sufficient,” he says. “What about people in the rural areas who do not have access to these? INEC could have used posters as well for information dissemination.”

In some cases, people spent significant sums of money repeatedly visiting their polling units only to learn that their cards were not ready.

“People are poor in Nigeria,” he says. “Many of them don’t spend up to one dollar a day. Now you are telling them to go and use that one dollar to transport themselves to collect voter’s cards.”

“Many people were not able to do it within that time,” he says.

However, some Nigerians have had no trouble obtaining their voter’s cards.

Segun Bankole caught a break when he picked up his card at the Akinyele Local Government offices in Ibadan in August or September.

“I knew one of the electoral officials, so I passed my temporary voter’s card to him and got my card in 30 minutes,” Bankole says. “Some people waited until evening before they got theirs. If I did not know someone, maybe I would not have gotten it on that day.”

Oyo state declared Feb. 5 and 6 public holidays to give voters time to pick up their PVCs.

Akeju, the resident electoral commissioner, says the troubles with the registration process are not especially surprising or concerning.

“These are part of the teething problems that you have when starting something new,” he says. “These machine things, especially when you are just starting, mistakes could be made.”

Getting a voter card will become easier, Akeju says.

“In another five to 10 years from now, you will walk into an INEC office, you register, you sit there, they take your picture and your card will soon be ready,” he says.

The commission did all it could to tell voters how to re-register and obtain their PVCs, Akeju says.

Commission staff members are working overtime to serve all the voters coming to collect their cards, he says.

In addition, the commission will employ 600,000 temporary staffers to ensure a smooth election, he says. INEC currently has 600 staff members in Oyostate.

Alonge has not returned to her local INEC office to see if her card is ready. Every day she spends there costs her income, she says.