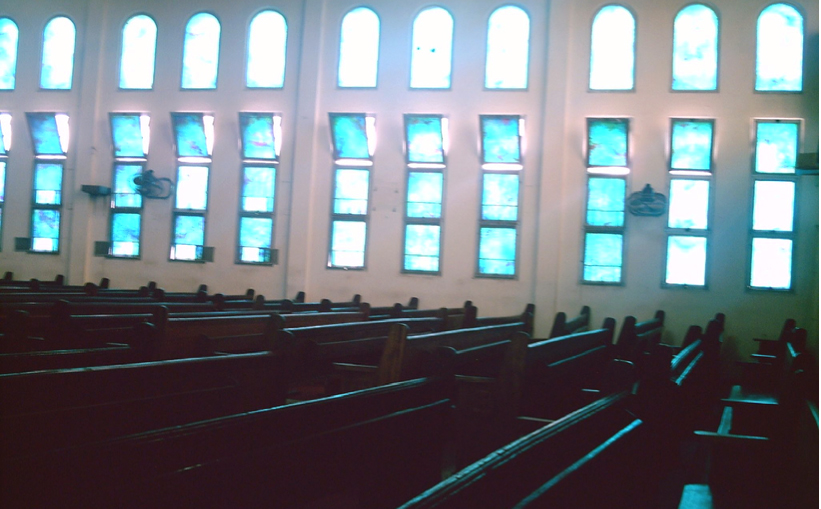 MONROVIA, LIBERIA – Fatu Tuah, 32, says she was just a girl when she witnessed the massacre that took place at St. Peter’s Lutheran Church compound 21 years ago during Liberia’s civil war.

“I was 11 years old when the massacre took place,” Tuah says.

She says that she and hundreds of other people had taken refuge in the church compound in July 1990 to escape violence on the streets. But she says violence found them anyway when a group of soldiers stormed the building and began raping and killing people at random.

“Because of the massacre, I lost my childhood,” Tuah says. “I saw loved ones die.”

She says the memories continue to haunt her.

“Sometimes when I think of it, it bring tears to my eyes, even now as I talk,” she says. “I grew up rather too fast after that incident.”

Although she has managed to rebuild her life, Tuah says her life would have been a lot better if it weren’t for the conflict. She says it has made her view life differently. She now takes each day as it comes because it’s never certain what might happen next.

“I hope a thing like that never happens again,” she says.

She says she doesn’t want her children to ever have to go through what she witnessed in the church because they might not be able to live with it as she is doing now.

“I want total peace for my country,” she says.

To help others find peace, Tuah says she wants to dedicate her life to improving the lives of people who were affected by the massacre. As a member of the Liberia Massacre Survivors Association, LIMASA, an organization created by massacre survivors to advocate for the rights of their fellow victims, she says she feels like she is making a difference.

“Some people are in trauma [until] this day,” Tuah says.

With memories of the massacre still fresh, many survivors banded together a few years ago to start LIMASA in order to advocate for reparations for their fellow victims. The government has created commissions to address the concerns of the victims, but they have yet to implement substantial measures. LIMASA members say they are doing their best with limited finances, but that the government must do more to ensure justice and peace for victims.

At the time of the massacre, Liberia was entrenched in the first of two civil wars, which started in 1989 and lasted until 2003. Armed groups fought to overthrow the government, which they accused of corruption, nepotism and killings.

On the day of the massacre, citizens took refuge in the church to escape violence in the streets. Survivors say they believe they were attacked in the church because the troops thought they were from the same tribe as the armed group’s fighters.

They say they believe the attackers were government troops because they were wearing official military uniforms and speaking the same language as the tribe of then-President Samuel K. Doe. The Liberian government denied any involvement in the massacre.

Initial reports at the time of the massacre put the death toll at 200 to 300. But international assessments and eyewitness accounts increased this number to 600.

The survivors of the massacre, mostly women, organized LIMASA in August 2009 to identify with victims and survivors and to advocate for reparation.

Victoria Duo, one of the women who played a major role in the formation of LIMASA, says that many women and children lost their lives that day.

“Whenever I think of what happens, it brings tears to my eyes,” she says. “I have never witnessed anything like that in my life.”

Looking sad, Duo says that if it weren’t for the massacre, her life would be a lot different.

“I lost relatives, friends and loved ones,” she says.

Another one of the organization’s founders, Peterson Sonyah, says he also lost loved ones – including his father, aunt, cousin and friends – on that fateful day.

“They killed people because they [thought] they [were] part of the tribe of the rebels,” he says.

Like Tuah, Sonyah says he was young at the time of the massacre, but the memories still haunt him and motivate his work today.

“I help organized LIMASA because of my passion for advocacy,” Sonyah says.

Hawa Tugbeh is another survivor who witnessed the massacre. A member of LIMASA as well, she serves as a social worker.

“I go out to talk to people who were directly affected by the massacre,” she says.

Sitting behind her desk, she displays forms that she has collected from people during her trips out in the field.

“Those people in that category are those who are still suffering from bullet wounds today,” she says, pointing to a stack of papers.

The Truth and Reconciliation Commission of Liberia, TRC, which was established by a legislative act in 2005 after the war ended to promote national peace, security, unity and reconciliation, released its final report on the massacre in 2009. One of its recommendations was to give reparations to those who were directly affected by massacres in Liberia.

President Ellen Johnson-Sirleaf of Liberia nominated commissioners to the Independent Human Rights Commission in 2010 to help implement the recommendations of the TRC, but the commission has yet to fully start its work.

“The TRC recommendations are important and should be implemented,” Sonyah says.

Ruby Johnson-Morris, an IHRC commissioner, says that the commission has been in contact with LIMASA, but they have not yet come to one understanding.

“We have been working closely with LIMASA,” she says.

But Tuah and her fellow members of LIMASA say there is more the IHRC needs to do.

“We need to see action now,” she says.

Others agree that more needs to be done because LIMASA can’t do it all.

Tugbeh rummages through papers on her desk as she lists some of the challenges her organization faces.

“One of the main challenge is finance,” she says. “Sometimes we don’t have the fund[s] to go out to people and talk [to] them. We do not have a budget. We do not even have a permanent office. We are just squatting here.”

Despite these challenges, LIMASA members say they are slowly achieving their goals, with the help of a few donors and the hard work of the group. They believe in the slogan, “Hard work pays.”

“Looking where we are now and where we were before, I think we are moving somewhere,” Duo says.