Skip to main content
The story you are reading was published on Monday April 10, 2017. To read more recent stories click here.

NAIROBI, KENYA — First, J. A. was a refugee from Somalia, a country ravaged with ongoing violence. Then, he became a refugee from the Somali refugee community in Kenya.

Seventeen years as a Somali Christian have left J.A., 28, who requested anonymity citing security concerns, with physical and emotional scars. His family rejected him. He worships God in secret.

But when U.S. President Donald Trump issued a travel ban for seven countries, including Somalia, the couple saw hope in one of Trump’s statements that said persecuted Christians would take priority in resettlement.

Trump’s executive order sparked a roller-coaster week for many refugees who faced uncertainty over their immediate and long-term futures. The order was blocked through a series of court decisions in the days after it was issued, but a new order, released in early March, announced a temporary ban on citizens of six countries, including Somalia. It did not prioritize the resettlement of persecuted Christians. That regulation, too, was blocked, but it’s not clear whether Trump will continue to pursue similar policies. 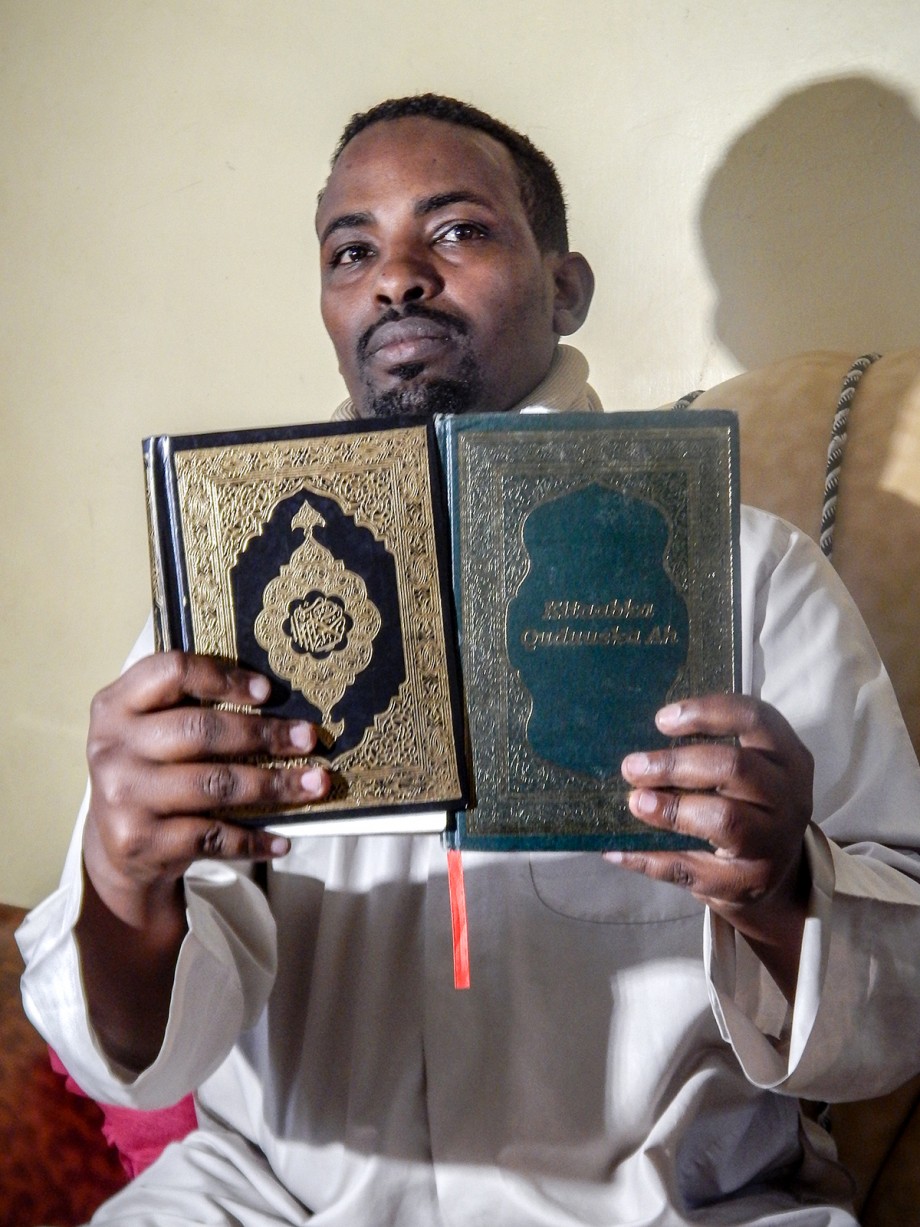 Joel Aden shows his Somali-language Bible, on right, which has a cover that mimics a design commonly seen on the Quran, the Muslim holy book, on left. Aden says his Bible’s cover makes it inconspicuous to people who might wish to persecute Christians.

That uncertainty leaves J.A.; his wife, I.A., a Kenyan; and the couple’s three children in limbo. They’re desperate to leave Kenya, a country where they say they’re persecuted by other Somalis because J.A. converted to Christianity. Trump has said Christians like J.A should be resettled for their safety. But as a Somali, J.A. is considered a potential safety threat.

Even as the U.S. border tightens, it’s still a favored destination for Somalis who are fleeing their country to escape violence and poverty. Neighboring Kenya has long been a natural destination, but now the Kenyan government wants to close the massive refugee camps that house many of those Somalis. The number of Somalis in Kenya has gone down in recent years, but many people remain.

In 2013, there were nearly half a million registered Somali refugees in Kenya, but by January there were 324,735, according to data from United Nations High Commission for Refugees. That decrease came after the two countries, along with UNHCR, signed an agreement that set guidelines to allow Somali refugees to safely return home.

A Kenyan government plan to close Dadaab refugee camp, where most Somali refugees live, was thwarted in February when Kenya’s High Court ruled that the action would be discriminatory, and therefore unconstitutional. That ruling temporarily eased fears for Somali refugees who haven’t voluntarily left Kenya, but Kenyan government officials indicated that they would appeal the ruling.

“The government has no responsibility to strain so much to deploy security resources of the Kenyan taxpayer maintaining a refugee camp of that magnitude,” Eric Kiraithe, a government spokesman, said in a press conference held the day of the court ruling.

The U.S. has accepted just over 100,000 Somali refugees for resettlement since 2002, according to the U.S. State Department’s Refugee Processing Center. Fewer than 400 of those Somali refugees identified themselves as Christian.

As Somali refugees’ options threaten to narrow, J.A. remains hopeful that his family’s faith will open a door for immigration to the U.S., even though he’s been given no indication by UNHCR or any other organization that, as Christians, their case will be prioritized once the ban on Somali immigration ends.

The government has no responsibility to strain so much to deploy security resources of the Kenyan taxpayer maintaining a refugee camp of that magnitude.Eric Kiraithe, a Kenyan government spokesman, referring to plans to close refugee camps that house Somalis

J.A. was a toddler when his family fled Mogadishu, Somalia’s capital, and settled in Garissa, a city in eastern Kenya. That was in 1991. In 1999, J.A., suffering from intense vomiting and a skin rash, was admitted to a hospital, where a Christian pastor prayed for him.

“I felt something different,” J.A. says. “I wanted to know more about the power that the man used in order for me to feel the relief that I felt.”

J.A.’s parents bitterly opposed his conversion to Christianity. Eventually, he left home for Eastleigh, a Somali-majority neighborhood in Nairobi. But even there, he was violently attacked, he says, and even poisoned.

“At this point, I knew I was suffering and faced rejection just because of my salvation,” he says. “But I knew that I was in the right place.”

J.A. might have been in the right place spiritually, but his geographic location was dangerous. One night in 2014, two men joined J.A. and a friend in a discussion about Christianity. The discussion turned into an argument. One man pulled a knife and slashed J.A.’s stomach. He stayed at Kenyatta National Hospital for two weeks. A criminal case is ongoing.

Katra Mohammed, 20, left Mogadishu in 2007, after she returned home from a madrassa, a local Islamic school, to find her house burned down in a spate of random violence. Neighbors found her and took her with them to Nairobi. Mohammed found a housekeeping job and someone in that household told her about Christianity.

“We would secretly study the Bible together,” Mohammed says.

That friend has since resettled in the U.S. as a refugee, she says.

Trouble followed Mohammed’s conversion. A group of men attacked her as she left church one day, and her injuries sent her to a hospital. The family that brought her from Somalia to Kenya still hunts her, she says. They’re angry that she converted to Christianity. 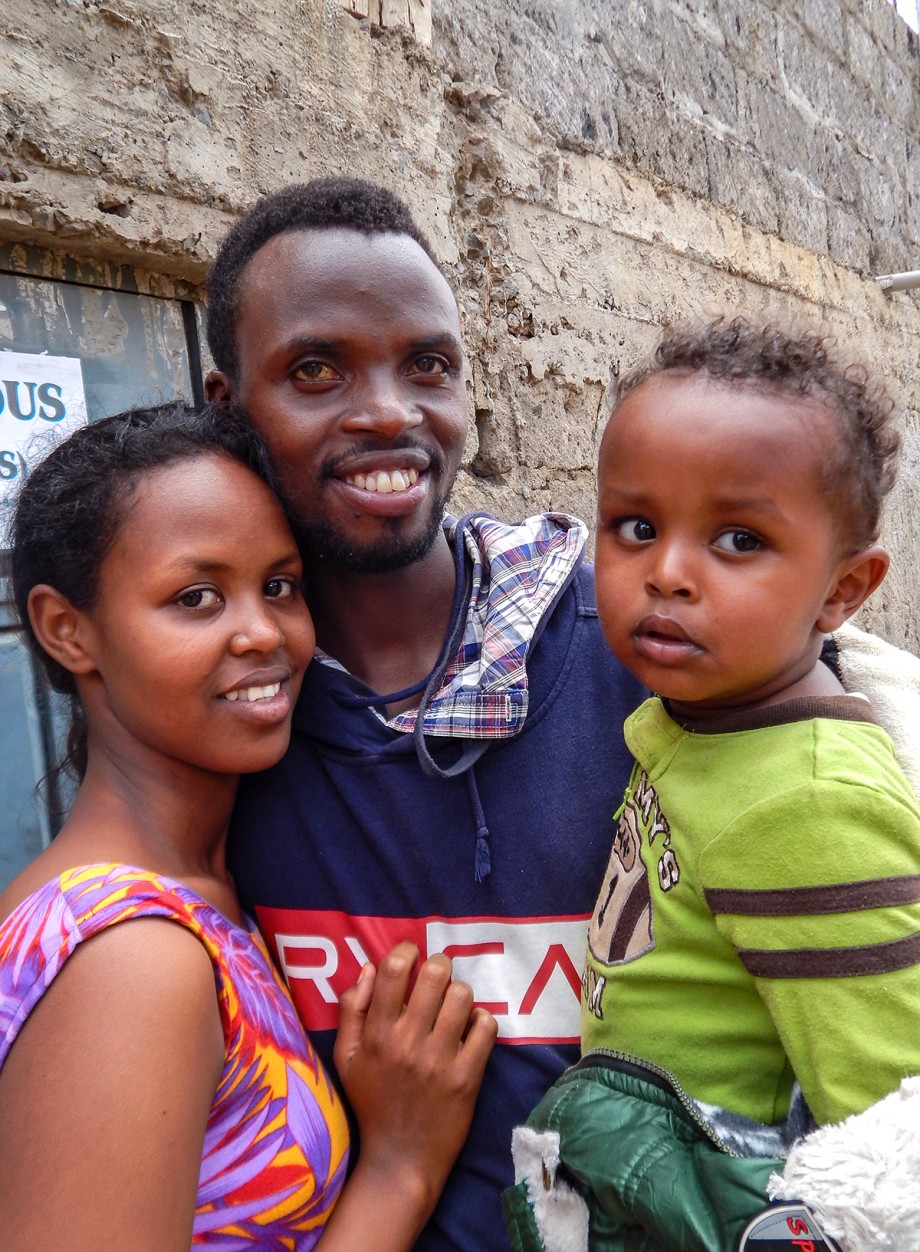 Katra Mohammed and her husband, Jean Paul Ngirabakunzi, shown with their child, stand near their Nairobi home. Mohammed says she’s lived in fear of persecution since she converted to Christianity.

Mohammed and her husband, a Congolese Christian she met at a church in Kenya, have lately avoided church for fear of persecution. When they do worship, they do it with other former Muslims who share their concern for secrecy. Even the covers of their Bibles are designed to appear similar to the Quran, the Muslim holy book, to thwart the attention of a potentially hostile person.

“It feels like double trouble for me,” Mohammed says. “Now I left our home many years ago, thinking that I was escaping the war there, only to be persecuted here for choosing the religion that I wanted.”

Andrew Maina, a spokesman for the Refugee Consortium of Kenya, says his organization hasn’t handled any cases of Christian Somalis being persecuted by Muslim Somalis, but notes that he is aware that arrests have been made in such cases.

For Mohammed, the U.S. is an earthly promised land, even though its borders are, for now, closed to her.

“Since I became a Christian, I have always wanted to go to the U.S. since I know there is freedom,” Mohammed says. “I know of friends who have managed to go to the U.S. and they are living a good life. I see my friend who went to the U.S. freely posting on social media about her Christian status. I wish I could do so.”

Correction: An earlier version of this story misidentified the nationality of a source. I.A. is Kenyan, not Somali. The story has been updated. Global Press Journal regrets this error.