Skip to main content
The story you are reading was published on Wednesday October 19, 2016. To read more recent stories click here. 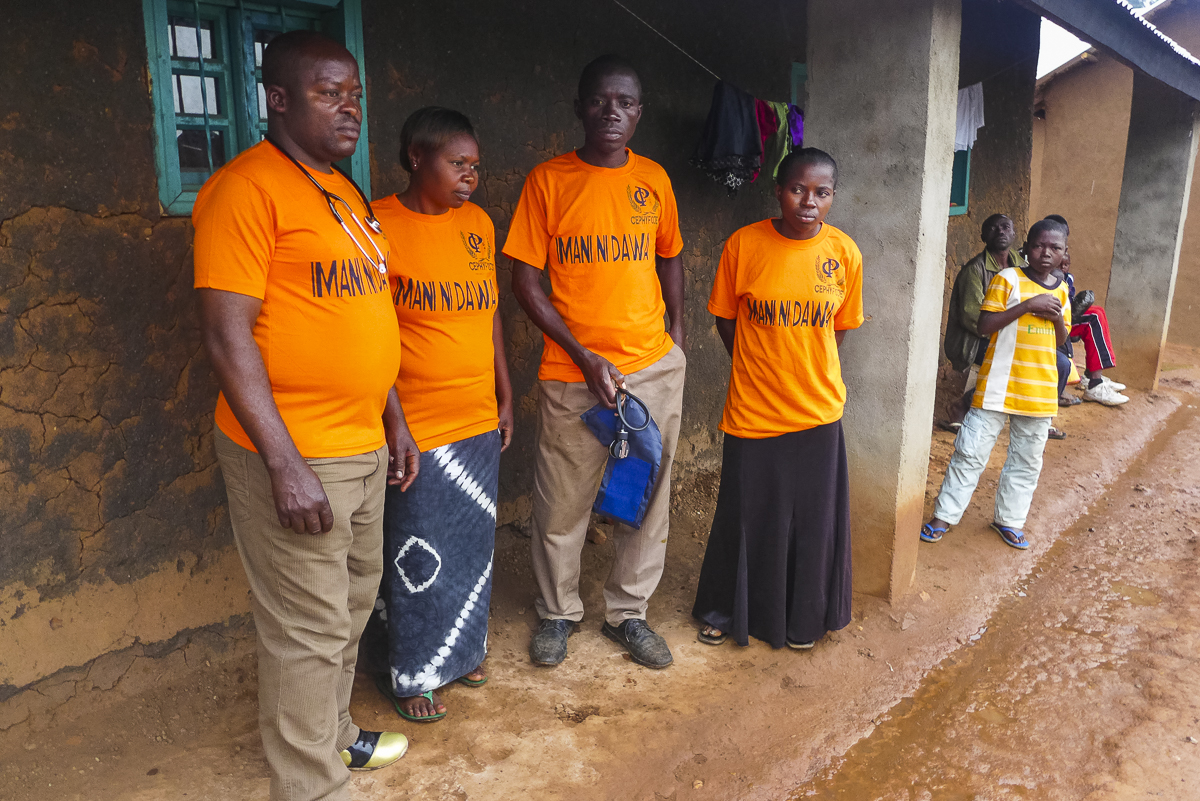 KIRUMBA, DEMOCRATIC REPUBLIC OF CONGO — Three children, two women and one man wait in a consultation room in front of a wooden shelf packed with glass bottles. The bottles hold liquid medications in a rainbow of colors: green, red, chocolate brown. Next to the bottles are tubes of ointment, tree bark and dried leaves.

Nearby, a slender man in an orange T-shirt lectures another group of patients. He sits at a table covered in rows of medical records. There is a stethoscope around his neck and a thermometer in his T-shirt pocket.

Everyone here is here to see that man.

Jean Muhindo Ndavire, 47, a traditional healer who also has modern medical training, is forging a new medical discipline in this region, one that combines Western medicine with traditional healing.

INSIDE THE STORY: Having long heard about the Mbuti because of the stigma that indigenous group experiences, a GPJ reporter discovers a health clinic that relies heavily on the group’s knowledge of local plants. Read the blog.

Known by his patients as Muganga, which means doctor in Kiswahili, Ndavire is the only person with significant formal training at the Imani ni Dawa health center in Kirumba, a rural town north of Goma in eastern Democratic Republic of Congo. Here, even nurses wear the orange T-shirts that bear the center’s name: Imani ni Dawa. It means, “Trust heals.”

This isn’t a standard traditional medicine practice. Nurses and other staff use modern equipment, including scales and blood pressure monitors. Charts are updated and medicine is prescribed.

There is also muchora plant, used to treat heart disease. The bark of the mango tree is reliable for intestinal worms and diarrhea. For typhoid, katongo is prescribed.

“When a client tests positive for a particular condition, I administer them traditional treatment,” Ndavire says. “We are trusted by our clients because they believe in the power of our skills to treat diseases.”

Ndavire was trained at the Traditional Medical Practitioner Center and at the Natural Medicine Training Center, in addition to other courses. He also completed a workshop, led by the chief doctor in the region’s health sector, on integrating Western and traditional medicine.

About 50 percent of his patients are people, indigenous to this area, who have been referred to as “pygmies,” but many consider the term to be derogatory. Those patients often help Ndavire collect the herbs and plants. 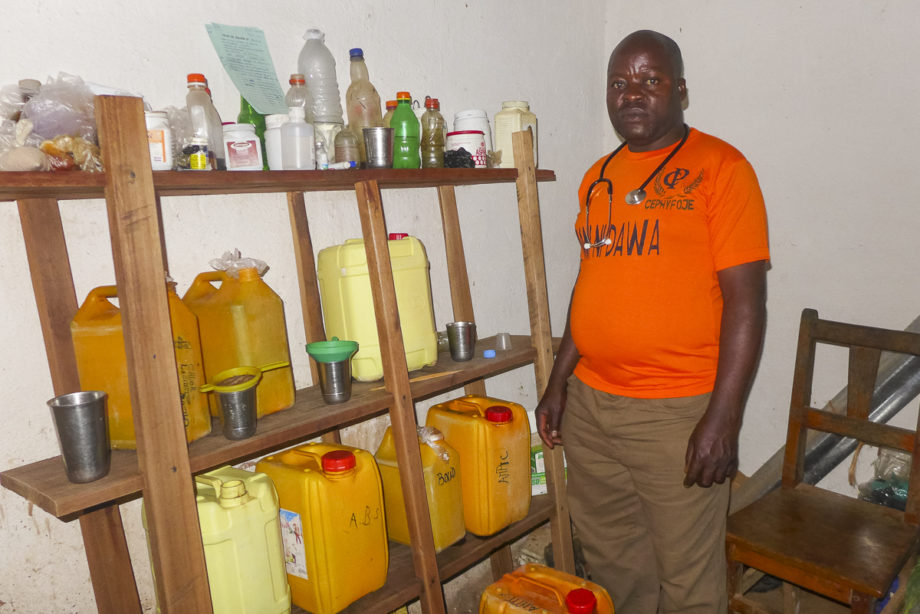 Jean Muhindo Ndavire, who blends traditional healing practices with modern medicine, stands near some of the remedies he prescribes for his patients. Many of the herbs used in Ndavire’s clinic are gathered by members of local indigenous groups, who historically lived in forests and have vast knowledge about local plants and herbs.

Their skills in collecting the herbs and plants are invaluable to Ndavire because they’ve historically lived in the area’s forests. Their local indigenous groups account for just a small percentage of the population here, but Ndavire says their extraordinary knowledge of medicinal plants is crucial to his practice.

In DRC, the term “traditional healer” refers to anyone who knowingly utilizes the healing properties of plants, animals or minerals. Traditional healers are common here, but Ndavire is trained as both a doctor and a healer, which are understood as two distinct professions here.

Natural treatments are preferred by most people in the area, says Mumbere Sufulia, president of the Provincial Committee of the National Association of Traditional Healers. On average, just 15 percent of cases received by traditional healers are referred out to modern hospitals.

Since 2006, a Code of Ethics, approved by the World Health Organization, regulates the practice of this traditional medicine.

Ndavire’s hybrid approach attracts people from all over the region. He says he sees about 15 patients each day. Indigenous people, the elderly and internally displaced people receive free treatment, which is made possible through fees paid by other patients.

“People seeking treatment there successfully recover,” says Kizito Kambala, who has been Ndavire’s patient. “The center strives to treat serious diseases. My friend Jonathan received treatment at the center after he was diagnosed with malaria. He recovered after one week of treatment.”

Despite Ndavire’s success, there has been some controversy over dosages used at the center and by traditional healers here in general.

“They can administer a 5-liter can of drug to a patient. In case of resistance to the medications, they re-administer the same amount of drug in the same way,” she says. “I think this can pose a serious health threat.”

Medical ethics isn’t a consideration among traditional healers, who tend to brag about being capable of everything, she says.

“I cannot encourage anybody to go there,” she says.

Kasereka Kamala, a local resident who sought treatment at the Imani ni Dawa clinic, says the staff there doesn’t have sufficient equipment to perform tests.

“What I’ve found is that they keep patients in treatment until the condition goes away irrespective of the recommended dose,” he says.

“Here, we treat each disease with a proper medication,” he says. “The dosage is prescribed accordingly to age and kind of medication. We can prescribe one glass, a half glass, a spoon for a specific time, we never go beyond a month. After a month, the patient is diagnosed again to make sure he feels OK. The respect of dosage is our high priority.”

Despite that skepticism, many local Congolese trust their lives to Ndavire.

Some illnesses can only be treated by a traditional healer, says Jean-Pierre Kambale Simwenge, a scooter driver in Kirumba. Simwenge says he once sought treatment at a modern hospital for his mother, who suffered from an unknown illness for a year. Nothing changed, he says.

“But one day she was traditionally healed at the center, and today she is fine,” he says.

Ndavire does his work without money from the government, which is what keeps many other health clinics afloat. He doesn’t own the clinic’s building, and he would like to use an ambulance to help transport patients, as well as medical equipment required to modernize his practice of traditional medicine.

“For us to improve our services, we need to receive training from more experienced medical experts,” Ndavire says.