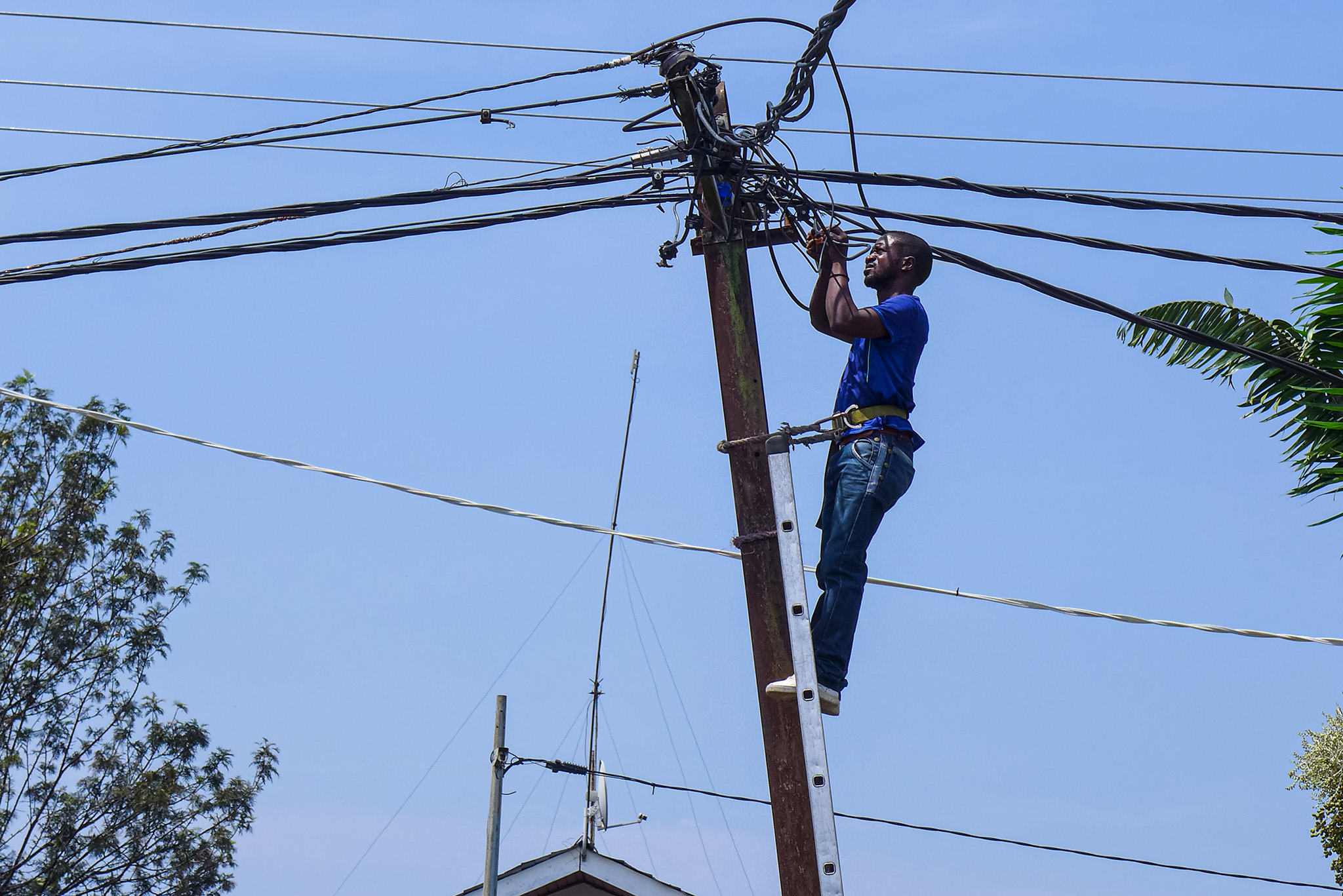 GOMA, DEMOCRATIC REPUBLIC OF CONGO — It’s closing time at Neema Hassan’s clerical support business. She smiles as she counts bundles of Congolese francs after a long day’s work providing photocopies for businesses, students and other individuals.

It wasn’t until Hassan, 27, graduated from university in 2015 that she had the idea of starting a business to make ends meet.

“I made an initial attempt back in 2017, but it didn’t work, because I could spend hours or even days without electricity, while my job is to print, scan and type my customers’ texts,” she says.

Toward the end of 2017, the unreliable power supply forced Hassan to close her business.

“I had to spend money on gasoline to turn on the generator set, and it ruined me,” Hassan says.

But by 2018, Hassan sensed an opportunity to try again. She noticed businesses opening in Goma – with a steady supply of power. Since resuming her trade, Hassan says she earns up to 50,000 francs ($30) daily. 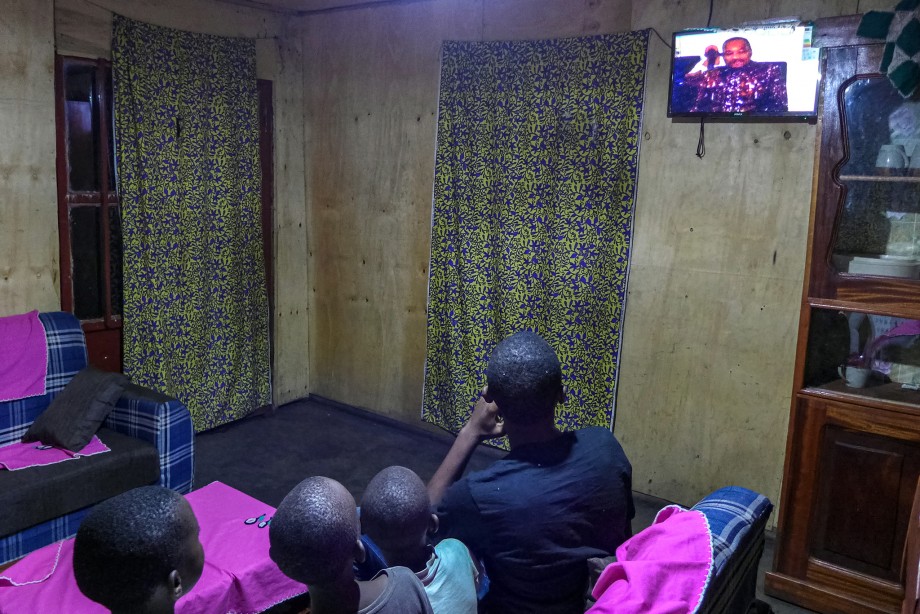 Papy Batachoka watches TV with his nephews at their home in Goma. Batachoka’s brother, Jean Baptiste Mupenzi, says his family spends more quality time together when there is stable electricity.

Hassan is one of the beneficiaries of a shift in electrical supply in Goma. After decades as a monopoly, DRC’s electricity utility, the Société Nationale d’Electricité (SNEL), now has competitors who contribute to the city’s power supply, allowing some businesses and residents to enjoy relatively stable power.

But in a country where only 15% of the population has access to electricity, there’s still a long way to go.

In 1974, the Congolese government dissolved all electricity companies, which had operated since the colonial era, except one: the Société Nationale d’Electricité.

But on June 17, 2014, law number 14/011 was enacted. It was intended to liberalize DRC’s electricity sector and enable private investors to compete to supply electricity to the public. This is how La Société Congolaise de Distribution d’Eau et d’Electricité (SOCODEE) came into being. Guy Chiyoge Habamungu, administrative and financial manager of SOCODEE, says the company needed $4 million USD to become operational. They began to supply electricity in 2018.

Aimée Nshombo, the company’s legal representative, says the primary purpose of SOCODEE is to contribute to the country’s economic development. It complements existing companies, including SNEL, to meet the demand of Goma residents.

More than 1 million people live in Goma’s 18 districts. Supplying stable electricity to all areas has proven difficult, and the 10 districts considered low-income are more likely to suffer from load shedding as suppliers focus on more lucrative customers.

Officials estimate that Goma requires 80 megawatts of electricity to accommodate residents and businesses. But to date, only 16.5 MW are available. SNEL’s capacity is 6.5 MW, while SOCODEE and another company, known as Virunga, supply 5 MW each.

“There’s a need for additional capacity to effectively supply electricity to the city,” Nshombo says.

Along with small-business owners like Neema Hassan, industrial consumers also benefit from the competitive market. For example, Nyiragongo Cement used to suffer power outages throughout the day.

“Ever since we turned to SOCODEE, the price of a bag of cement has dropped. A bag that once cost up to $11 currently sells for $9. So, it really has a positive impact for everyone’s benefit,” Kakule says.

Jean Baptiste Mupenzi, a father of six, says access to electricity every day is a positive development.

“Today, my family and I can sit down together around a TV every night, and the kids can do their homework without any hindrance,” he says.

“Before, when SNEL didn’t have enough electricity, the whole city could end up being left in the dark, but that’s no longer the case today,” says Stephanie Mwamini, a bar owner.

However, several zones in Goma still don’t have reliable electricity.

In Ndosho, one of the city’s poor neighborhoods, generators are widely used. Patient Murhula, 31, owns a hair salon there.

“We cannot spend two days without the generator failing. It has a negative impact on my business,” he says.

A February 2019 study in the journal “Conflict, Security & Development” examined electrification in DRC. The study states, “Wealthy Congolese and their expatriate clients aside, the rest of Goma’s inhabitants will have to continue to rely on faltering public electricity – which might see their revenues reduced and will be less able to service maintenance to economically modest users.”

The country’s leading electricity supplier is neutral about increased competition.

Mark Kadundu, SNEL’s legal advisor, says he’s not personally against competition. What matters, he says, is working together to accomplish a shared mission of providing more access to electricity to the people of DRC.

“Together we’ve got to work as a team to achieve sustainable and positive results,” he says.

SOCODEE manager Habamungu acknowledges that there is a long way to go to light the whole city of Goma, but he says progress must be noted.

“Our wish is to be able to illuminate the whole city, even beyond. In any case, with other investors, we will be able to reach the 80 MW need to supply the city,” Habamungu says. “Considering what we’ve been able to accomplish, the future looks promising.”