Skip to main content
The story you are reading was published on Sunday June 25, 2017. To read more recent stories click here. 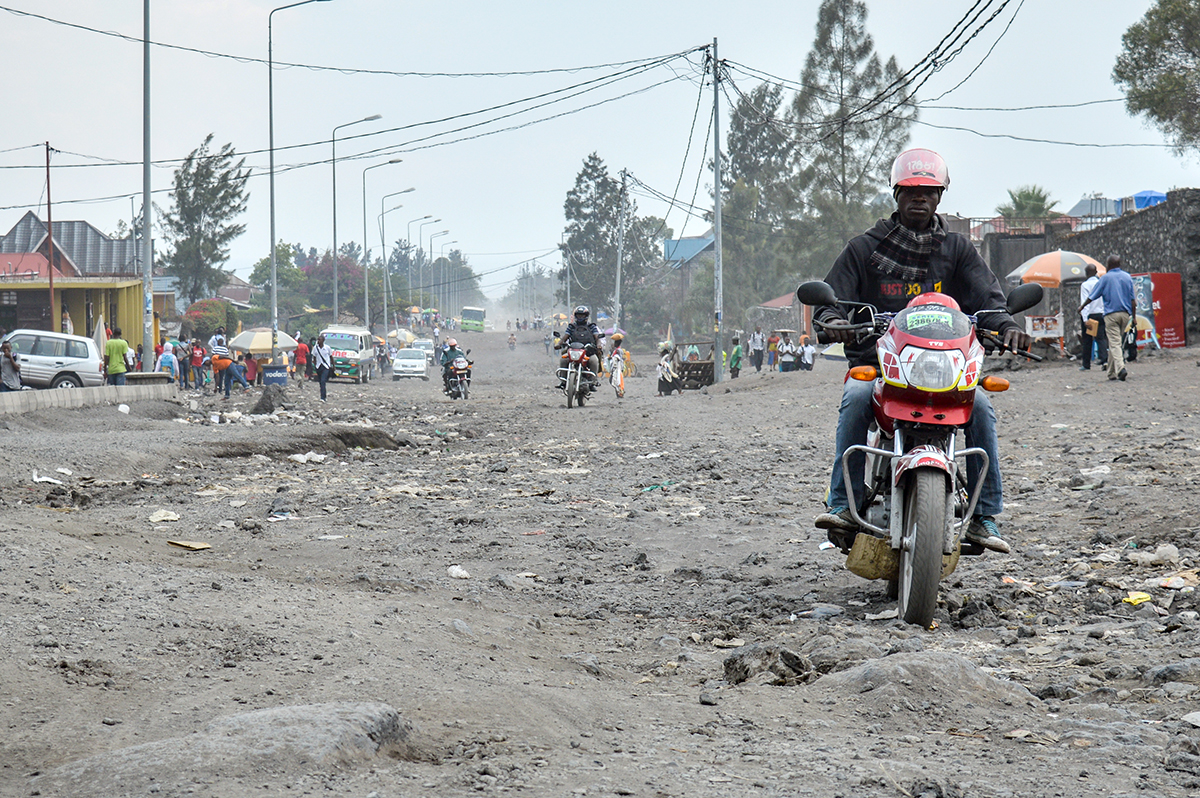 GOMA, DEMOCRATIC REPUBLIC OF CONGO — The transition from the picturesque lakeside Rwandan town of Gisenyi into Goma, the capital of DRC’s North Kivu province, is sudden. Smooth asphalt quickly gives way to Goma’s bumpy roads, known for their crater-size potholes and spikes of hardened lava.

The dirt roads that wind through most of Goma also create a blanket of dust that covers the city. Small-business owners, who say they can’t afford to open shops in the few areas of town that do have paved roads, can’t keep their stores and merchandise clean. Some shops are forced to close when weather makes the roads unpassable or when traffic stirs up an unbreathable amount of dust.

Road construction projects, pledged as a priority of President Joseph Kabila during his campaign in 2006, started in the province in 2008 but quickly came to a halt due to lack of funds. In 2014, road construction projects in North Kivu were divided into kilometer-specific obligations among regional, national and international partners, but few have been completed on time, or at all.

For local business owners, frustration is mounting. Some are now openly accusing the provincial government, one entity yet to deliver on any of its road construction obligations, of corruption.

Philémon Senge, 51, owns Ya Wazazi, a grocery store and industrial bakery on Katindo Road, which has some of the worst stretches of road in Goma.

“For years now, we’ve been doing business, and we pay our taxes regularly,” he says. “We’re nearing our 25th anniversary in business, and our taxes have always contributed to swelling coffers of the public treasury.”

The provincial government of North Kivu collects taxes from business owners and citizens that are meant to pay for infrastructure and development projects, including road construction within Goma. But despite regular tax payments, Senge and others say they see no progress.

Senge says road conditions have negative effects on his daily business. Dust and debris from the roads cover his food products. He pays $100, a significant portion of his annual income, just to keep his store clean. When clogged traffic prevents patrons from accessing roads, his sales plummet.

“I realize that most of our customers have disappeared because of dust,” he says. “They’ve chosen to use an alternative paved road towards the museum. It’s our wish that our road will be paved.”

Throughout Goma, a densely populated city in eastern DRC, residents have been waiting for more than a decade for the government to make good on promises to repair the city’s nearly unpassable dirt roads. For business owners in areas with the worst roads, economic activity is declining, and they say the poor state of these routes is one reason. While funding partnerships with the national government and several international organizations are moving forward, the provincial government of North Kivu says roadwork has been stalled by a delay in receiving materials from overseas, as well as funding constraints.

Across DRC, one of Africa’s largest countries, limited investment in infrastructure has left most roads in poor condition. Armed conflict between 1996 and 2004 put roads throughout North Kivu in particular in a state of near-total disrepair.

After winning the presidency in 2006, Kabila pledged to rebuild rural and urban roads throughout the North Kivu province, one of the most conflict-prone regions of the country, as part of a program he dubbed “the Revolution of Modernity” during his campaign.

Some road construction did begin here, briefly, in 2008. Early projects were funded by the provincial government, but the work soon stopped, due to lack of funds at the provincial level and an absence of involvement at the national level.

Across DRC, one of Africa’s largest countries, limited investment in infrastructure has left most roads in poor condition. Armed conflict between 1996 and 2004 put roads throughout North Kivu in particular in a state of near-total disrepair.

In 2014, an international group of funding partners relaunched road construction projects in Goma. The funding partners include the provincial and central governments along with the European Union; the United Nations Organization Stabilization Mission in DRC, known as MONUSCO; and the Economic Community of the Great Lakes Countries, known in French as CEPGL, which works to provide safety and development in the public interest for member states. The partners divided areas of responsibility for urban and rural roads.

But more than three years later, some projects have yet to begin, while others are delayed or completely stalled.

In February 2014, the North Kivu provincial government undertook a project to rebuild a 5-kilometer (3-mile) stretch of road from Katindo to Virunga-Kibalabala, the plan stalled for a time but was recently completed. The CEPGL designated funding for 3.5 kilometers (2 miles) of road that has not yet been completed. MONUSCO took responsibility for 11.4 kilometers (7 miles) of road in downtown Goma. But earlier this year, MONUSCO presented just 7.1 kilometers (4 miles) of completed road. The European Union has committed $28 million for the construction of 38 kilometers (23 miles) of road from Goma to the town of Sake in the Masisi area.

The responsibility for the remaining construction falls to the provincial and central governments, says Julien Paluku, governor of the North Kivu province. There is no data available to determine how many kilometers of road, if any, have been repaired by the central government since 2014.

Paluku says the provincial government derives most of its income from the North Kivu General Tax Directorate, known in French as the DGRNK, which is tasked with collecting levies. In 2016, the budget for North Kivu province rose to nearly $46 million, of which almost $10 million was earmarked for infrastructure.

At the end of the 2016 fiscal year, the province allocated $6 million for continuation of road construction, but those funds have not materialized. Paluku says financial problems at the provincial level – similar to the ones facing the whole country – forced North Kivu to suspend its portion of road construction projects. In 2016, presidential elections were postponed in DRC. The blame fell on a financial crisis that had left the country unable to afford voter registration and other election processes. But critics and opponents of President Kabila have said the move was a way to extend his term, since the constitution forbids him from running again.

Paluku says he is hopeful that the efforts by other partners will put pressure on the central government to contribute its share to the National Road Maintenance Fund, known as FONER. The province hopes to resume its role soon, he adds.

“The North Kivu provincial government intends to mobilize funds to resume construction of the roads, the construction of which has been entrusted to the province, starting early in the second quarter of this year, 2017,” Paluku told Global Press Journal in March. At publication time there had been no change in the status of the project. 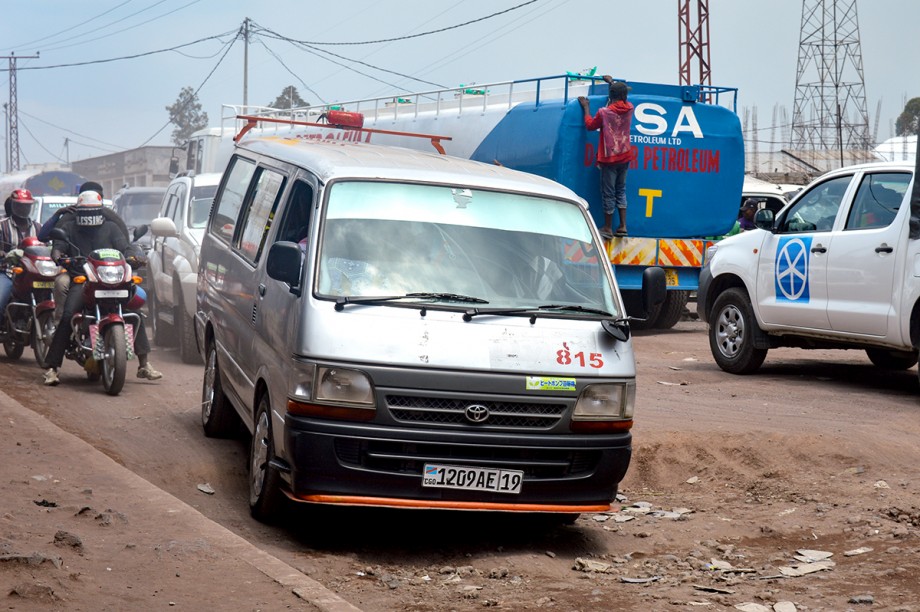 A minibus taxi transports passengers through the bumpy roads of Goma, the capital of DRC’s North Kivu province. Road construction has been delayed for nearly a decade here.

While the road projects of the provincial government sit stagnant, an increasing number of citizens and business owners are accusing tax collectors of pocketing public money.

“Please, have a look at my sewing supplies,” he says. “They’re fully covered with dust.”

Kakule says he would move his shop if he could, but he can’t afford to relocate, because rents are much more expensive in the few areas that have paved roads.

Kakule and other local business owners are worried about the economic health of the area while the roads lie in disrepair. Physical health is an issue too; many people say they have developed coughs from breathing the heavy dust kicked up by cars. But mostly they are voicing concerns that road construction has been suspended despite the fact that they are paying their taxes.

“The traders here fulfill their tax obligations honestly,” Kakule says. “State agencies and the City Council come here to collect taxes. Where does all our money go? Is our money pocketed by individuals? My best answer to these questions is, I don’t know!”

Kafota Mirindi, 30, a carter who sells goods in the same area, says he wonders why a province as wealthy as North Kivu finds itself compelled to suspend road construction works. Mirindi does not have a permanent shop but sells his goods from a cart. He says he, too, pays taxes to the DGRNK.

“Even carters pay tax amounting to $5 each month to fill their coffers,” he says.

Mirindi says he often earns as little as 500 Congolese francs, or 35 cents, per job. So the $5 monthly tax hurts, but he says he pays it regularly.

“Where do all these taxes end up, and who uses them?” he asks, voicing allegations of corruption. “We live in grass-thatched houses, while our authorities and MPs live in luxury villas. Tax officers buy several parcels of land using taxpayers’ money misappropriated for personal use. As a result, we’re caught up in the storm of suffering.”

The traders here fulfill their tax obligations honestly. State agencies and the City Council come here to collect taxes. Where does all our money go? Is our money pocketed by individuals? My best answer to these questions is, I don’t know!Pascal Kakule, 39, sells sewing materials in Goma

Espoir Tumaini, 29, is a public transport bus driver in Goma. This is another profession requiring the payment of monthly taxes and fees that are supposed to be invested in infrastructure development.

“If I could ask our authorities to do only one thing, it would be to continue the construction of roads,” he says. “Sections of roads are paved; other parts remain unpaved. Potholes cause damage to our buses. And they cause accidents.”

Tumaini says he is also a compliant taxpayer.

“We are in good standing with the government, because we drivers regularly pay taxes,” he says. “I pay road tolls to FONER, road tax and any other required fees. I also pay for roadworthiness tests for my vehicle, and I buy insurance. Where does all this money end up? Why is it not being used to continue and complete road construction?”

Tumaini says roads have become so bad that passenger counts on local buses are down. People prefer to use motorcycles, because they can dodge potholes and move faster through congested traffic.

Emery Malinga, head of the division of Legal Affairs of the DGRNK, says allegations of corruption are baseless. He says the country is in a state of financial crisis, but the departments are working to put tax revenue to good use. As an example, he mentions a new fuel tax that allows the DGRNK to draw 16 percent per liter of fuel purchased in Goma to go toward the construction of the city’s urban road network.

Malinga says that all funds reserved for road construction are co-managed by the city.

“Therefore, there is no need for corruption or misappropriation, because revenues are managed together with the population to respect the principle of redistribution of income to the population,” he says.

Still, the unpaved roads continue to cause precarious conditions.

Mâ-Louise Kyatangala, 33, is a pregnant mother of four who frequently uses public transport bus services. She says it’s dangerous to ride in buses or any other vehicles on Goma roads.

“I call upon the authorities to think of us as women,” she says. “When we are pregnant, the best means of transport for us are buses, not motorcycles. With potholes that have become a scourge on our roads, we can lose our pregnancy due to having been shaken all over while on board a car going over potholes.”

Malinga urges residents to be patient.

“What we can promise to the population is that all roads will get finished one day.”