Skip to main content
The story you are reading was published on Sunday July 16, 2017. To read more recent stories click here. 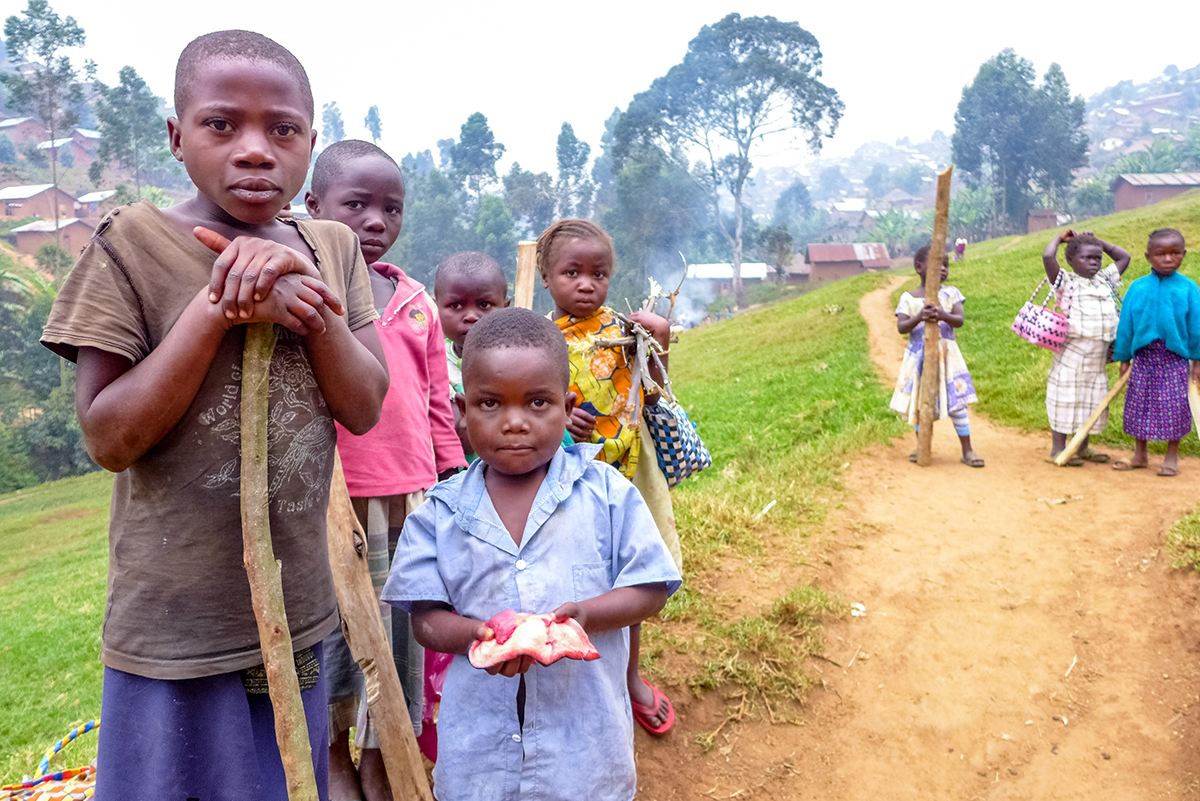 KIRUMBA, DEMOCRATIC REPUBLIC OF CONGO — As fighting between the Mai Mai Mazembe militia and rangers at Virunga National Park intensified in December, Solange Kavugho and her three children, fearing for their lives, were forced to flee.

She says they left many things behind – friends, family and food.

Kavugho, 35, lived in Kamandi-Lac, a locality near the shores of Lake Edward, 30 kilometers (18 miles) east of the rural town of Kirumba. In her village, she grew crops and raised livestock. She says her family’s life was humble, but her children’s bellies were full.

Now, in Kirumba, a deeper fear is setting in, she says.

Her children, ages 4, 7 and 10, barely escaped the machetes, but now they face a more tortured path to death – starvation.

“We live a life of suffering. We used to eat fish and vegetables. Now, we live in a state of utter destitution. My children are starving,” Kavugho says. 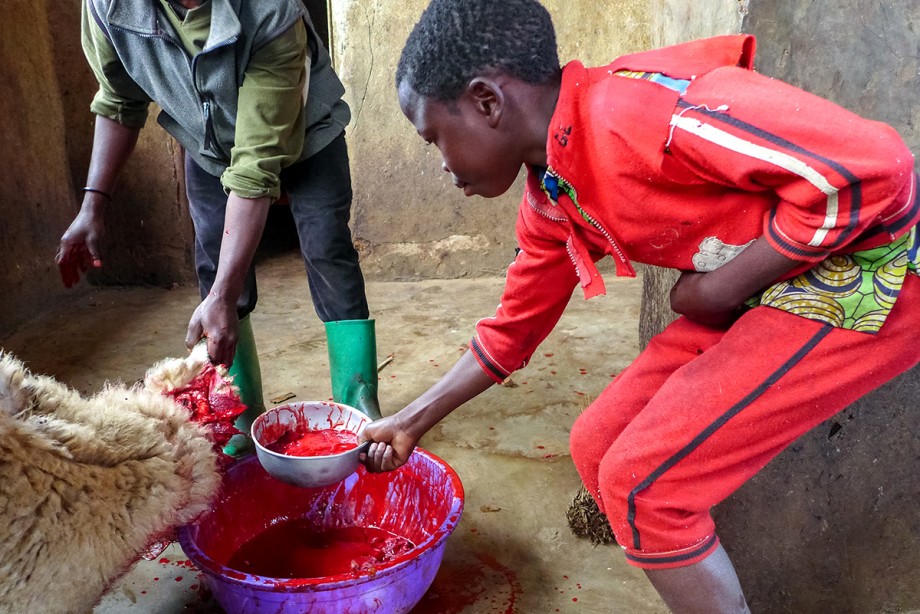 As malnutrition rises, families rely on animal blood from the slaughterhouse to cook and eat as an alternative to meat.

The children spend their days hovering around Kirumba’s slaughterhouse, a popular place where children who do not have enough to eat scrounge for scrap pieces of meat or blood, to take home to cook.

These days Kirumba is full of new residents. Forced to flee their homes and abandon their land, people are crammed into this rural town, leading to devastating food shortages. Meanwhile, locals say armed groups are feasting on the crops left behind.

Insecurity is again rampant in most of DRC’s southern Lubero Territory, causing the massive displacement of people leaving their livestock and fertile fields in favor of relatively-secure neighboring towns. Consequences of the displacement are many. Children are out of school, unemployment is high and food shortages are causing a significant rise in malnutrition and starvation.

“When people are forced from their homes, farming activities remain paralyzed. And 80 percent of Congolese rely on agriculture for their livelihood. As a result, nearly all the households are starving,” Museya says.

Charlotte Sivunavirwa Katungu, a nutritionist at Kasando Health Center in Kirumba, says the local food shortage is leading to malnutrition. When the body receives inadequate nutrients, she says, many symptoms begin to appear, like diarrhea and kwashiorkor, the protein deficiency that causes delayed growth and distended bellies in children.

As more people leave their farms, rebel groups are erecting road blocks to prevent people from returning to their fields. Farmers say rebels are tilling their lands, feeding themselves while the rightful owners starve.

According to Katungu, the health center is seeing an increasing number of malnourished children who come to the center in search of food supplements, like Plumpy’Sup and Plumpy’Nut, produced by the French company Nutriset. The packages, distributed to children and adults experiencing malnutrition, contain peanut paste, powdered milk, sugar, vitamins and minerals.

While no organization is yet tallying the new numbers of internally displaced people in Kirumba, the U.N. Office for the Coordination of Humanitarian Affairs reported in 2016 that 156,000 people were displaced by the Lubero-Rutshuru crisis. That number has likely increased, as local residents report increased fighting between December 2016 and March 2017.

When Kavugho, a single mother, arrived in Kirumba in January, she found a job as a house worker earning 1000 Congolese francs (69 cents) per day. While she says she is one of the lucky ones to find a job here, she says her wages are not enough to feed her children.

“The only 1000 francs I earn is not enough to feed three children,” she says. “And, worst of all, sometimes I come home empty-handed, leaving my kids with no choice but to go to sleep on an empty stomach.”

Like many others, her kids spend their days, while she is at work, roaming the town looking for something to eat. 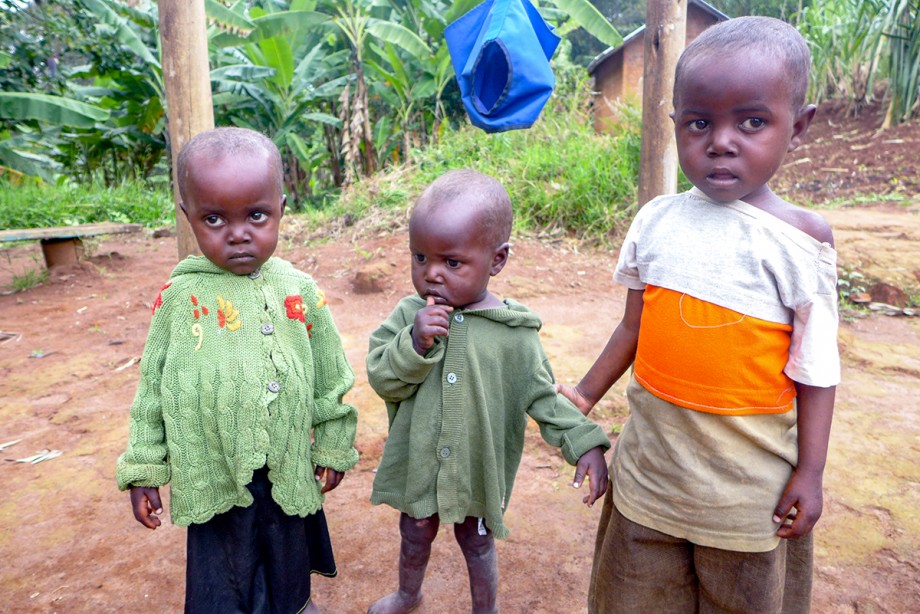 Philemon Kasereka Katsuva, 23, has been here since June of 2016. The oldest of nine children, he says they fled the Kibirizi area of the Rutshuru Territory as fighting escalated between the Democratic Forces for the Liberation of Rwanda and the Mai Mai Mazembe.

“Even if we live in a relatively secure area, we are at risk of starving to death,” Katsuva says. “We left behind our fields, and we have found ourselves utterly landless in our homeland. We have decided to put our fate into God’s hands.”

He says he works small jobs for neighbors to earn money or food scraps.

“We often skip meals so that we can afford to eat a small amount of food in evening,” he says. “To watch my little brothers and sisters starve is torture for me.”

As more people leave their farms, armed groups erect road blocks to prevent people from returning to their fields. Farmers say the fighters till their lands, feeding themselves while the rightful owners starve.

Vianney Paluku Kalumbi, 41, is a farmer separated from his fields. He says road blockers – armed individuals who intentionally block roads to bribe or steal from passersby – took his crops.

“Road blockers broke into the field and took all our crops,” he says of his fields in Matembe, 130 kilometers (80 miles) north of Kirumba. “We can no longer till our land, and our family is having a hard time finding enough to eat.”

Meanwhile, children, including Kavugho’s three, spend their days lingering around the slaughterhouse, hoping to collect animal blood to drink as an alternative to meat. When boiled, the blood hardens into a cake.

Kavugho says she wants to go home to her fields. She remains hopeful that peace will come before her children starve.

“The government should do its utmost to restore peace to our village because our crops are rotting in the fields while our children are dying of hunger,” she says.

Museya agrees. He says if the region can find peace, families will be able to protect against hunger.

“There is a need to restore security to the villages,” he says. “As a consequence, our country will become a paradise on Earth where every child leads a life free from hunger.” 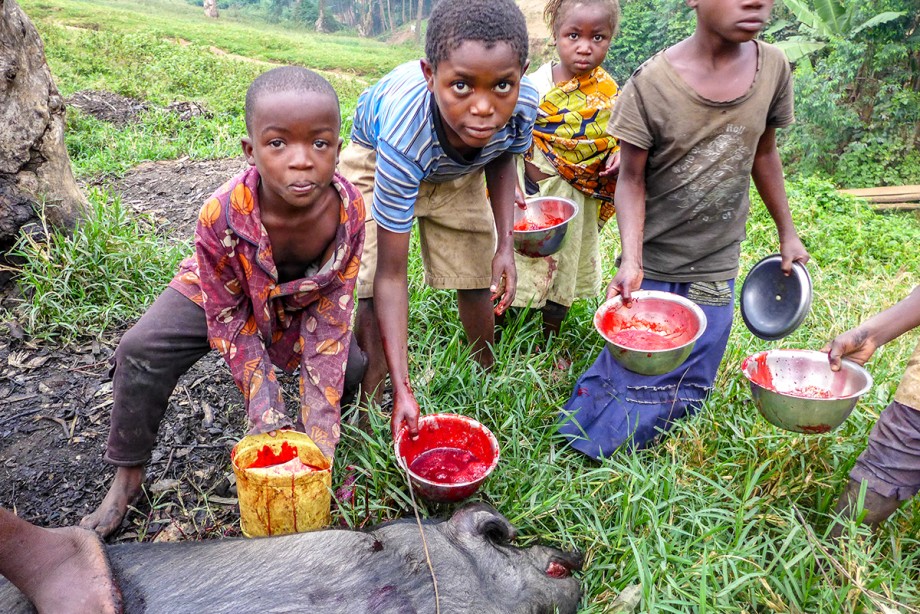 Children collect blood from animals at the Kirumba slaughterhouse to bring home to boil and eat.