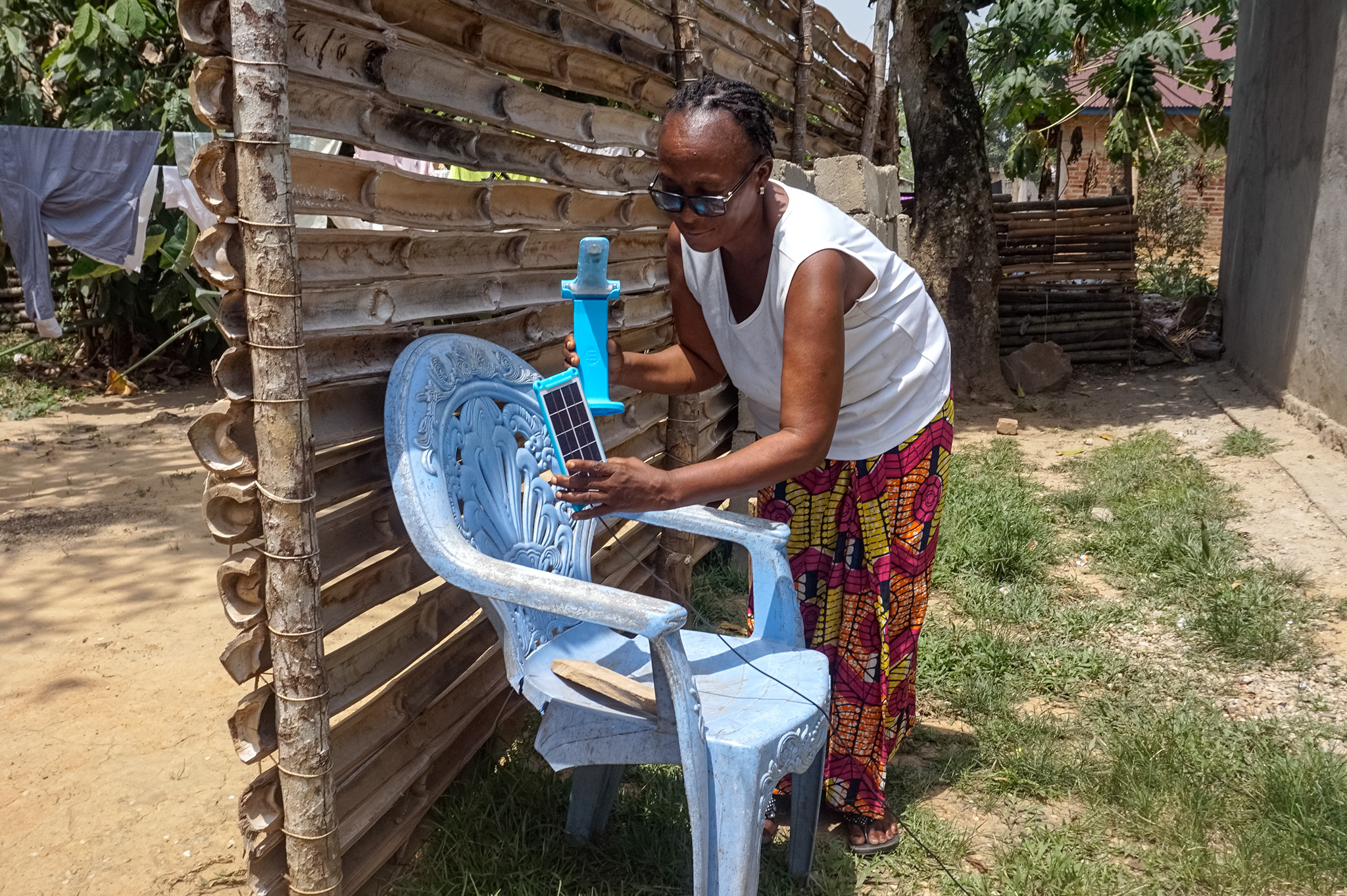 KISANGANI, DEMOCRATIC REPUBLIC OF CONGO — At 7 a.m. in Kisangani’s Kabondo commune, the quiet of early morning is sometimes pierced by shouts of “Ouwwwoooooo!”

It almost sounds like the post-goal reaction at a football match. But these joyous outbursts from the heart of one of DRC’s largest cities come from residents seeing electric lights flashing on, usually after multiple-day outages.

“We’ve been without power for two days,” says Crispin Kalokola, a technician and father of seven. “So how could I work, and earn money when it’s the only activity that helps me support my family?”

Load shedding, or the intermittent disruption of electricity service in sectors of a community, has become a regular occurrence in Kisangani. For Kalokola, the impact is far-reaching. He’s in debt to the national electricity company, Société Nationale d’Electricité, known as SNEL, which charges despite the outages, and viewed negatively by his customers for not finishing his work.

Kalokola’s frustration is heightened because Kisangani is home to one of 11 hydroelectric dams in DRC.

SNEL oversees the dam at Tshopo River Falls, and in theory, it should produce enough power to serve this city of more than 1 million people. But thousands live with the daily reality of intermittent electricity, threatening their livelihoods and endangering their safety. 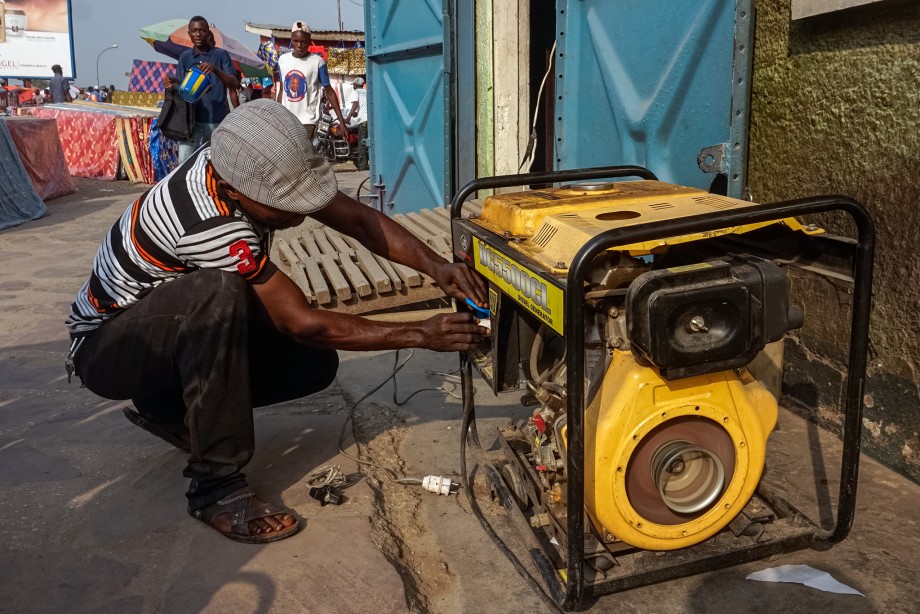 Steve Mumbere tends to a generator at the central market in Kisangani’s town square. Generators are a must in Kisangani, where there is no steady supply of electricity, even though the city is home to one of DRC’s hydropower plants.

The coronavirus has only worsened the economic situation, with a government-imposed shutdown of nonessential businesses and schools.

Activities slow down or grind to a halt regularly. The resulting inconvenience is a nuisance, but it was also deadly on at least one occasion. A Kisangani dressmaker died in November trying to repair a technical breakdown in an electrical cabinet near his shop.

Many Kisangani residents blame SNEL for the electricity shortages, which they say result from the company’s failure to live up to its mission. A SNEL employee, who requested anonymity out of fear of being fired, says the company uses outdated equipment that officials try to repair during power failures, but that eventually stops working altogether. Customers also say that as a result of the lack of electric meters, they pay flat-rate electricity tariffs that are much higher than the actual amount of power they consume.

Nathan Chirimwami, the head of SNEL’s electric distribution network management department in Kisangani, blames the city’s growth. He says the hydroelectric dam was built before 1960 to handle the electricity needs of a smaller  population and demand has grown far greater than what the company can produce.

For Félicien, SNEL’s finance director, another problem is the perception that his company is out to cheat the public. He says SNEL isn’t driven by profit, but by service.

“Unlike people in other parts of the world, people in the city of Kisangani enjoy low electricity tariffs and light their homes for less than $5 per month,” he says. “And yet, 1 kilometer (0.6 mile) of power cable can’t be procured for less than $85,000, while the construction of an electrical equipment storage cabinet requires spending at least $100,000.”

In short, Félicien says, the only solution is to build another dam. And that needs approval from top-level officials.

“National authorities should get involved in this situation, because there’s nothing the SNEL alone can do,” he says.

Officials counter they’re already involved. Improving the living conditions of the Congolese people is among the country’s priorities, and that includes electricity, says Lomalisa Monde George, the energy minister for Tshopo province, where Kisangani is located. He didn’t offer details as to how the government would achieve that goal.

Residents wonder what they’re expected to do in the meantime.

National authorities should get involved in this situation, because there’s nothing the SNEL alone can do.Aguzu Félicien, SNEL’s finance director

Bonui Talemba, a machine operator who works at a rice mill, says power cuts prevent him from fulfilling his responsibilities toward his family. When he can’t process the grain, he can’t pay school fees or feed his children.

“I feel demoralized whenever there’s a power cut,” Talemba says.

Marie Kapita, a stay-at-home mother, says households take a hit because electricity shortages cause rising prices for basic foods. When she goes to the market, she says, she’s shocked to see the cost.

“I’m caught off guard, because I’ve bought five cups of rice while I expected to buy seven,” Kapita says.

A select few benefit from the disruption.

Kabondo gets relatively steady electricity only on Saturdays and Sundays, so people who run phone-charging businesses are experiencing a windfall.

“I’m happy with this phenomenon,” says Héritier Dunia, who owns a publishing house and gets a fee for servicing electrical equipment. “I use my generator set throughout the week to charge phones and other electronic equipment, and I live off it.”

The situation is worse in other parts of Kisangani. Some residents say they have gone months or even years with no power.

“I’ve never seen power with my own eyes; I don’t know whether the SNEL exists,” says Yannick Tonoki, a resident of Makiso commune, located in the center of the city.

He used to have a generator but the oil cost too much. He finally gave up and installed a solar panel.