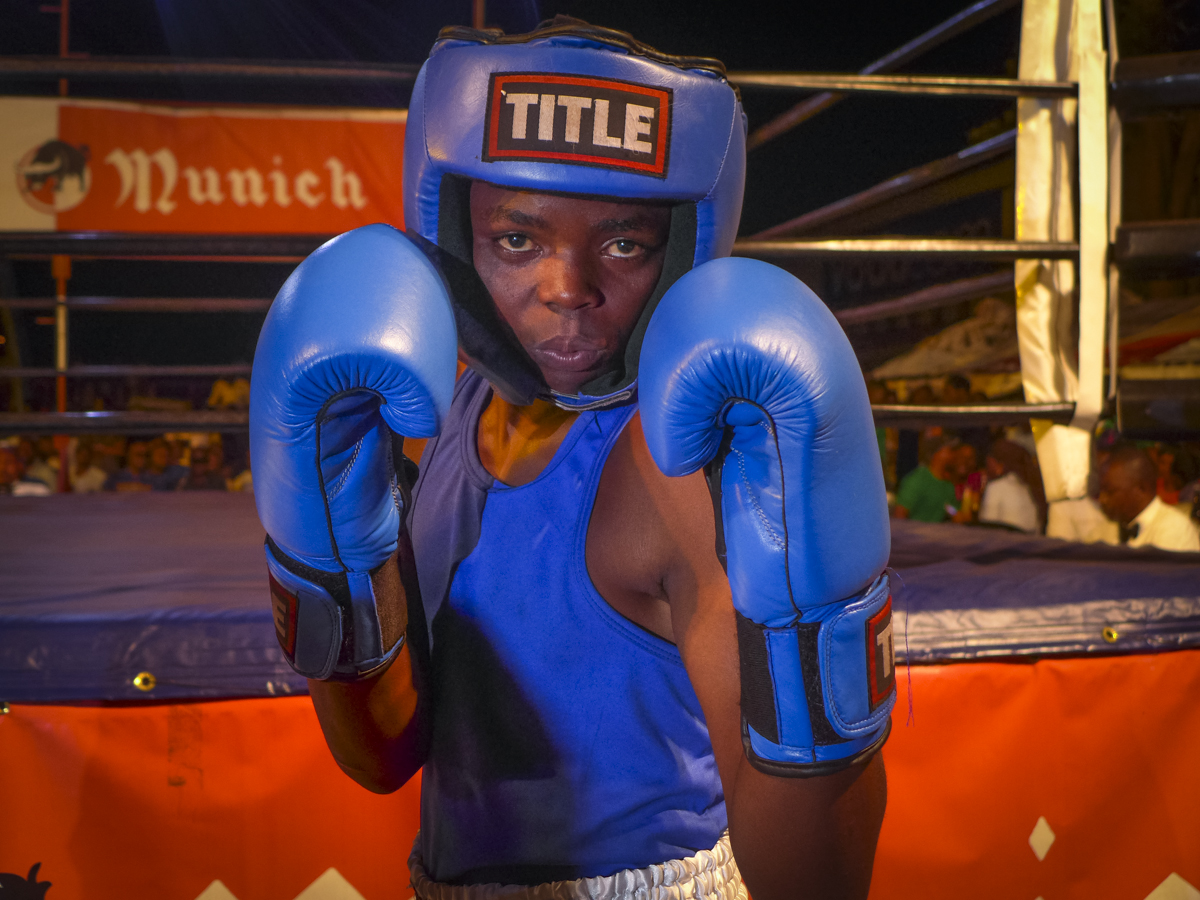 GOMA, DEMOCRATIC REPUBLIC OF CONGO — It’s 6 a.m. on a Sunday, but Unity Stadium is already full.

Football teams practice at one end of the stadium, and men do karate and judo at the other. Near the bleachers, young boxers ranging in age from 10 to 25, gather to fight.

Income disparities are obvious. Some boxers wear gloves, helmets and mouth guards, but others are shoeless. Still, they are all proud members of the Club de l’Amité, which translates to the Friendship Club, an organization founded by Balezi Bagunda, a former child soldier who has since founded an amateur boxing club.

Bagunda, who is known by his boxing name, Kibomango, joined the armed group known as the Alliance des Forces Démocratiques pour la Libération du Congo (AFDL) when he was 14 years old. The AFDL, which in English is called the Alliance of Democratic Forces for the Liberation of Congo, was led by the late Laurent-Désiré Kabila, who in 1997 overthrew the government of Mobutu Sese Seko. He lost one eye while fighting with the group.

Now, at 38, he’s a boxing champion in DRC’s North Kivu province and has represented his country in matches in Rwanda. There are 33 young people in his boxing club, all of whom embrace the motto “Boxing for Peace.”

Most of the local amateur boxers are former child soldiers, Bagunda says. They come from a various tribal groups, creating a mix of people that, in other scenarios, could spark violence in this conflict-prone region.

But boxing diverts their attention away from that conflict, Bagunda says, and channels it into healthy competition.

There is no proper boxing training facility in Goma, the capital of DRC’s North Kivu province. Bagunda and his clubmates work out in a tiny room in the belly of a football stadium.

The club includes children who live on the streets, as well as former child soldiers who were abducted by armed groups and forced into fighting when they were as young as 10. 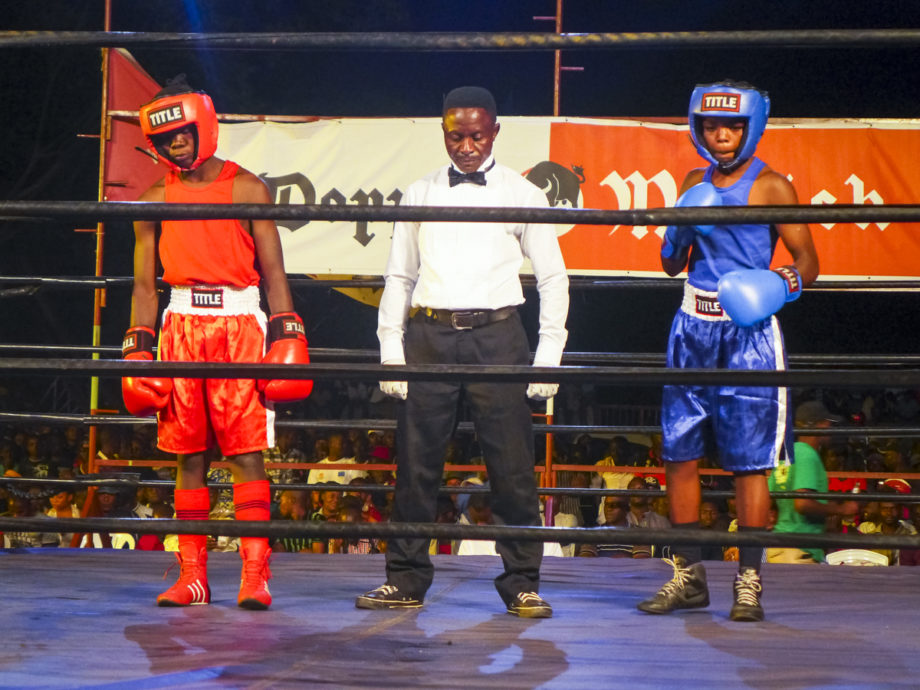 Rigo waits in the ring with his opponent, dressed in red, another amateur boxer who came from Kigali, Rwanda’s capital city.

More than 5 million people died due to armed conflicts and a humanitarian crisis in DRC between 1998 and 2007, according to widely accepted International Rescue Committee estimates. More than 33,000 children have been demobilized here since 2004, according to UNICEF’s child protection unit in DRC. But given the ongoing insecurity in the country, especially in the east where clashes over control of natural resources is intensifying, children are at constant risk of recruitment into armed groups, according to Child Soldiers International.

Prince Mushagalusa, 17, who goes by his boxer name, Rigo, was once a child soldier. Now, he dreams of a professional career in boxing.

He was forcibly recruited at age 12 into an armed group in Bunia, a town in northeastern DRC. He spent three years as a child soldier. He came to Goma two years ago, after the government called on young men to leave the groups and reintegrate into society. Now, he tells other young people about his experience so they can avoid being forcibly recruited into armed groups.

“To leave my past behind me, I decided to take part in boxing training sessions,” he says.

Rigo hangs sandbags on the bleachers and demonstrates how to pummel them with their fists. Some boxers hold up their bare hands for others to punch.

Rigo lives with his parents and siblings in Birere, a large slum in Goma. He recently dropped out of school.

“Whenever I went to school dressed in primary school uniform, I felt ashamed,” he says. “I had an uneasy feeling whenever I saw my friends in higher grades while I was in third grade at age 15, so I opted to quit school and train for boxing.”

To leave my past behind me, I decided to take part in boxing training sessions. Prince Mushagalusa, 17, who goes by his boxer name, Rigo

“My son is heading toward a promising future in sports. I believe that my son, with his courage, will become the city of Goma’s Tyson,” he says, referring to American boxing champion Mike Tyson.

Bagunda says the club was founded to help Rigo and others like him.

“I founded this boxing club to get former child soldiers to forget what they have experienced for several days,” Bagunda says. “This club’s motto is ‘Boxing for Peace’ and nothing else.”

Bagunda says he feels great pride when he sees the young people practicing. He says his goal is to help his fellow former child soldiers to cope with the heavy burdens they carry as a result of war.

Kedrique Moke, 25, says he was forced to become a child soldier when he was recruited at age 10 into the Union des Patriotes Congolais, which translates to the Union of Congolese Patriots, a group notorious for rape,  torture and massacres.

“I was fortunate to come across a good-hearted person who has ambitions similar to my own because he, too, is a former child soldier,” Moke says. “Consequently, we have become united by our past experiences.”

Moke supports his two children through boxing, as well as by working as a mechanic and towing service provider.

The boxers in Bagunda’s club compete in tournaments against boxers from neighboring Rwanda. The two countries have long struggled to eliminate tensions. Anaclet Mpongo, chief of the sports and recreation division of North Kivu province, says the tournaments help that effort.

“We seek to promote peace amongst youth in eastern DRC and those in Rwanda,” he says. “It is important to us not to win but, in fact, to play quite well because we primarily engage in boxing for taste and pleasure, especially in this province which has long been in the throes of armed conflicts.”

Bagunda says it is challenging to keep the club going. It lacks equipment, a training pitch and even money to cover transportation costs.

He gets some donations, but the real thing that keeps the program going is Bagunda’s desire to give these young men hope, as he has found hope.

“When I box, I try to leave my past as a child soldier behind me,” he says. “This sport gives me hope.”