Skip to main content
The story you are reading was published on Friday September 11, 2015. To read more recent stories click here. 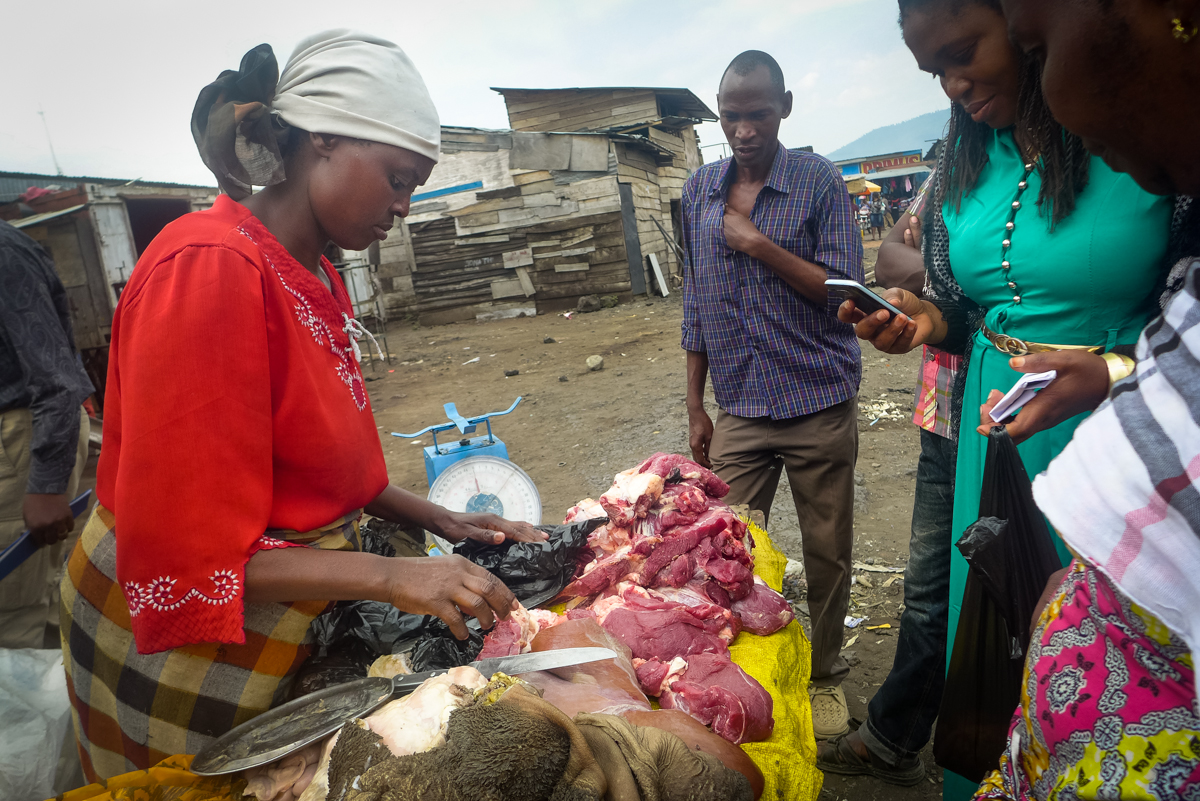 GOMA, DEMOCRATIC REPUBLIC OF CONGO – With a saucepan and plates in front of her, Seraphine Mawazo peels potatoes, preparing to cook meals for her customers.

“Today I’m going to buy food for my children,” Mawazo says with a smile.

Mawazo has been living in Goma for two years, since she fled with her husband and four children from her home in the Rutshuru region, north of the capital of DRC’s North Kivu province. There, the family lives hand-to-mouth, entirely reliant on Mawazo’s income.

Mawazo is among the 2.7 million people whom the United Nations High Commissioner for Refugees estimates are internally displaced in this war-ravaged country. Many of the displaced fled to Goma. A Norwegian Refugee Council report found that Goma’s population grew by 45 percent – from about 580,000 to about 839,000 – between 2012 and 2013.

“I knew that life in town will not be easy, but I had to choose. I choose security.” Jeanne Kabuya, a 48-year-old mother of nine childre

The problem is a global one. According to a May 2015 report from the Internal Displacement Monitoring Centre, a division of the Norwegian Refugee Council, 38 million people around the world were, as of the end of 2014, displaced within their own countries because of armed conflict and other violence.

That’s a 15 percent increase over 2013, the report states. DRC is among the five countries that account for 60 percent of the world’s internally displaced people.

Many refugees, like Mawazo, struggle to find legitimate work to sustain their families. Others turn to crime or prostitution to survive. They face hunger and being victims of petty crime. But their new lives are still better than their old ones in an important way: They don’t fear they’ll be killed.

“I knew that life in town will not be easy, but I had to choose,” says Jeanne Kabuya, a 48-year-old mother of nine children. “I choose security.”

Kabuya, with her husband and children, left their home in the Rutshuru region to avoid being kidnapped, robbed or even killed. Many of her neighbors were attacked, she says, but she thinks she initially avoided the violence because she was poor.

No one slept, she says. They could not work peacefully. They were fearful every second of every day.

“I knew that one day it will be my turn even if I don’t have wealth,” she says.

Now, Kabuya sells meat on the side of the road in Goma.

The city teems with people struggling to survive.

Abouba, 20, who asked that his last name not be used, carries people’s luggage for tips during the day, but he has nowhere to go but shop verandas when night falls. Abouba says he’s been sleeping outside for three years, since he left Masisi because armed groups often kidnapped boys from that village and forced them to fight.

“Almost all of my friends who were enlisted by force did not return, and it was said that they were no longer alive,” Abouba says. “This is why some of my friends and I chose to flee without knowing exactly where to go, because we do not have families here in Goma.”

Abouba and others like him live difficult lives, but they also create problems in the city because of their drug use and petty crime, says Pascal Ndakavuro, an official in the government’s social-affairs department.

Abouba and his peers say that they’re stuck. Violence has trapped them in a cruel life, and change is unlikely, they say.

Ange Furaha became an orphan at 15 years old, when her parents were slain by armed men who robbed their home in the village of Masisi, 78 kilometers (48.5 miles) northwest of Goma. Her brother was 13 years old.

“Our parents had sold a cow on the day before, but unfortunately there was no money at home because our uncle had taken it and put it in the bank,” says Furaha, now 21. “So when the attackers could not find the money, they killed our parents.”

Furaha and her brother went to live with their uncle in Goma, but their uncle’s wife was cruel, she says.

“She sometimes denied us food and forced us to work as her slaves,” she says.

DRC is among the five countries that account for 60 percent of the world’s internally displaced people.

When Furaha turned 16, she says, other girls showed her how she could make money on her own – as a prostitute. Furaha says she wanted to be self-reliant and care for her brother, and also have money to buy clothes, shoes and body lotion.

“Thanks to what I do today, I can afford everything I need,” Furaha says. “Also, I pay school fees for my little brother, who is currently enrolled in the first grade of high school.” ​

Mawazo, the woman cooking on the side of the road, once had a stable life with her husband, Jean Kabuo, and their children. Kabuo farmed corn and beans, and Mawazo prepared and delivered his meals. But one morning in 2013 she approached the field where he had been working and found his shoes scattered and his hoe discarded.

While she stood wondering what had happened, a man dressed in filthy black clothes approached her.

“ ‘If you dare cry or move, I will slice your throat immediately,’ ” Mawazo says the man said.

The man demanded $3,000 as a ransom – an enormous sum in a country where the average per-capita income is $410 per year. Mawazo sold her belongings, including cattle and pieces of land. Friends and family members gathered cash. Within a week, she had the money, and rushed to the spot where she agreed to meet her husband’s abductor.

Mawazo says she handed over the cash, and the man disappeared into a forest. She waited for four hours. As the sun began to set, Kabuo emerged from the brush. He was skinny and hungry, Mawazo says, after a week of suffering. He told Mawazo he had been tied up in a house and fed just once a day. But he was alive.

“Since that day, we’ve taken refuge here in Goma because we feared that armed groups would kill us one day,” Mawazo says.

The family arrived in the city with nothing, she says. Relatives hosted them at first, but after six months she rented a small, one-bedroom house. Mawazo began to rebuild the family’s life, but that has been difficult. Her husband can’t find work.

“We fled our village because of insecurity, but here we are engulfed by poverty,” she says.