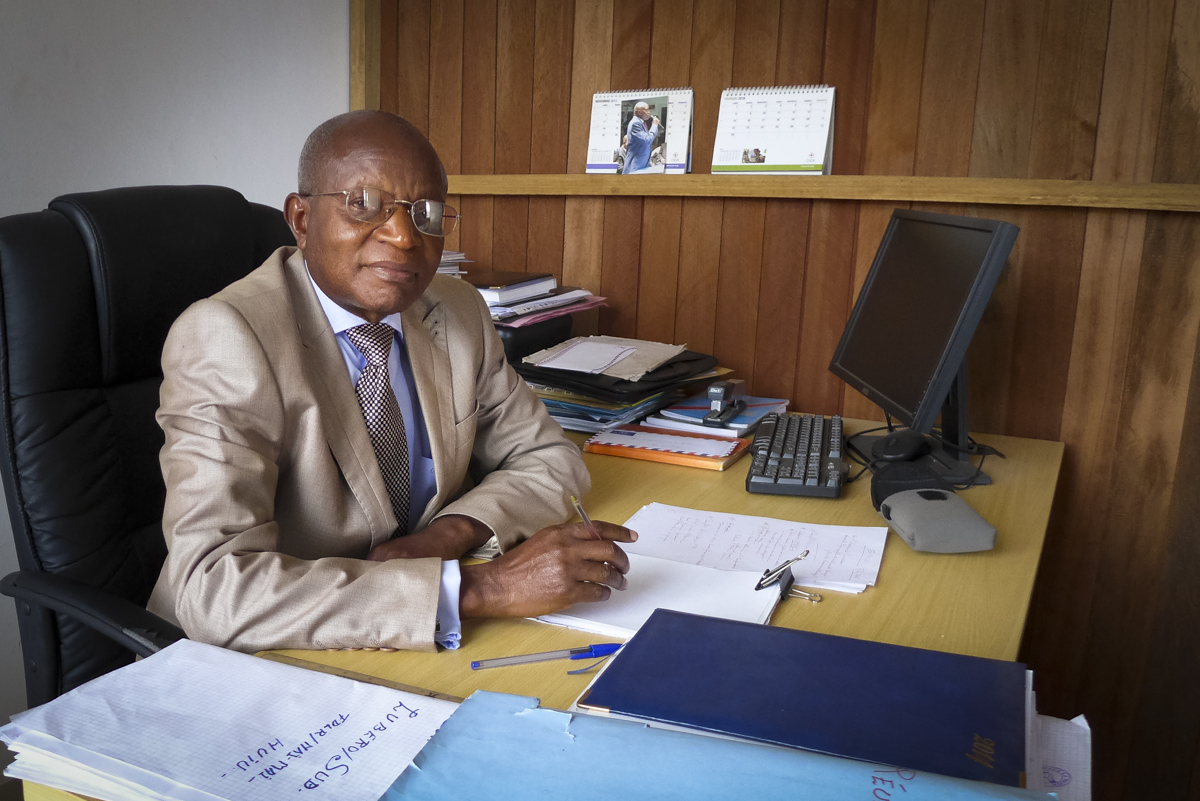 GOMA, DEMOCRATIC REPUBLIC OF CONGO — Violence based on ancestry is a part of life in eastern DRC.

The police presence in rural and rebel-controlled areas is minimal, and government interventions are rare. There are few options for conflict resolution.

To fill that void, local people created the Inter-community Council of Elders to prevent, manage and resolve conflict in Democratic Republic of Congo’s North Kivu province. The group of men that represents the nine major people groups promotes peace through direct conflict mediation and cultural programs.

“For all Congolese, irrespective of their tribes, it is of vital importance to get along with one another to create an enabling environment for peace and prosperity,” says Pierre Georges Luhindi Fataki, president of the elder council.

Fataki is from the Nande group.

People who want power are those behind the conflict in this community. Pierre Georges Luhindi Fataki, president of Inter-community Council of Elders

The council’s role in mitigating conflict was on display recently as two groups – the Hutu and the Nande – postured to take control of parts of the Rutshuru territory in eastern DRC.

It’s difficult to know which group occupied the territory first because there was a mass immigration of people into the region during colonial times to supply labor to the area’s tea plantations.

Both groups claim that the territory belongs to them.

Politics, Fataki says, was at the root of a spate of recent killings that brought new tension to the area earlier this year.

In February, the body of a Nande man was found in his field, killed by machete.

Fataki says the Nande community was outraged and assumed the man had been murdered by a Hutu rival.

The next day, Fataki says, the body of a Hutu man was found, also murdered by machete.

That’s when the Inter-community Council of Elders, known locally as the Baraza la Wazee Intercommunautaire, intervened.

The council, which first formed in 1998, determined that the killings were politically motivated. Since the Hutu and Nande people share the territory, members of each tribe are eligible to run for political office. The killings, Fataki says, were prompted by rumors designed to create chaos and spur the electorate to vote.

“People who want power are those behind the conflict in this community,” Fataki says.

Stephane Lupao, the council’s administrative secretary, confirms that their investigation found political maneuvering to be the the instigator of violence.

“We did our own investigation to find out why people were killing each other, and finally we found that there are some political figures behind all these killings,” Lupao says. “Those politicians have been using rumors to create chaos so they can rule.”

“For example, if a Hutu person wants to be elected in the coming election, he will need all Hutu people to come together to vote for him. For that reason, he must create hate between Hutu and Nande people so that no Hutu will cast a vote for a Nande candidate. This maneuver will be also used by Nande candidates who want all Nande to vote for him,” Lupao says.

They have no capacity to give strong punishment or put anyone in prison. What we need is enough policemen in our region. The government should be the one to take action, otherwise I’m telling you that people will keep dying. Marie-Merci Kalumuna, 40, referring to the Inter-community Council of Elders

DRC is one of Africa’s largest countries, with a population over 74 million. It is also home to more than 200 people groups. That diversity has long been a source of tension in the region.

The Rwandan genocide, which occurred in 1994, was sparked by the same tensions that cause violence in DRC today.

More than 5 million people died due to the conflict between 1998 and 2007, according to widely accepted International Rescue Committee estimates. Other types of violence are also common. For example, the United Nations Population Fund, which deals with sexual and reproductive health issues, reports more than 11,000 cases in which sexual violence was used as a tool of war.

Earlier this year, tension between Hutu and Nande in eastern DRC resulted in more than 20 deaths, dozens wounded and homes burned, according to the cases reviewed by the council.

The Hunde, Hutu, Kano, Kumu, Mbuti, Nande, Nyanga, Tembo and Tutsi each have representatives on the elder council.

When violence or political tensions erupt, the elders discuss the issue and representatives go to the community to propose the council’s solution. In addition to the nine primary members of the council, one additional member represents minority groups in the region. Council leadership rotates between each tribe ever year.

In the 18 years since the council was formed, it has become the only permanent forum for dialogue between groups, Fataki says. The council is also behind a number of arts and culture initiatives designed to bring community members together to celebrate similarities.

Despite recent setbacks, Lupao says the council has high hopes that there will be lasting peace in the DRC.

“Over the past years, we have sought earnestly to combat ethnic segregation. We’ve searched for common ground between the groups which were in conflict, and now all we have to do is maintain order,” Lupao says. “We leave no stone unturned in ensuring that peace lasts infinitely.”

But some local people say the council is ineffective.

Marie-Merci Kalumuna, 40, recently fled from Rutshuru. She says she doesn’t believe in the council anymore.

“From my own experience when I was living in Rutshuru, I think that the elder council has no sufficient strength to bring peace.”

Over the past years, we have sought earnestly to combat ethnic segregation. We’ve searched for common ground between the groups which were in conflict, and now all we have to do is maintain order. We leave no stone unturned in ensuring that peace lasts infinitely. Stephane Lupao, administrative secretary of the Inter-community Council of Elders

Kalumuna says she fled Rutshuru because people were being killed and kidnapped every day, despite the presence and interventions by the council. She concedes that the killings might be politically motivated, but she says the council has no power to do anything other than promote dialogue.

“They have no capacity to give strong punishment or put anyone in prison,” she says. “What we need is enough policemen in our region. The government should be the one to take action, otherwise I’m telling you that people will keep dying.”

Samson Nyamusuma, a tailor based in the Birere neighborhood of Goma, says people here harbor segregation in the depths of their hearts and tensions impact every part of daily life.

“Personally, I know someone who cannot hire a person from a different tribe for a job,” says Nyamusuma, who declined to state his own tribal affiliation.

For Albert Kasongo, political manipulation of historic tensions is what continues to foster violence.

Kasongo says it’s politicians who, for their own interests, drive people to fight on the grounds of their ancestry.

“Many people like trouble,” he says. “Some say it is during times of trouble that they manage to strengthen their political career or their business.”

Still, others say that the council offers an important opportunity for dialogue and sharing culture.

“As the arts and culture are two important and complementary things in our society, it is essential for us to make use of them to bring and maintain peace in our country. Today, with the cultural ballet, people come together to form one community, namely a human community,” Mishonyo says.

Today, the situation in Rutshuru is calmer.

The elder council asked the population to stop the killings and brought the political motivations to light. The council also called on the government to restore stronger security measures in the area.

“We want the world to know that we Congolese are making every best effort to prevent massacres that devastated the DRC for years from ever happening again,” Fataki says.