Skip to main content
The story you are reading was published on Sunday January 10, 2016. To read more recent stories click here. 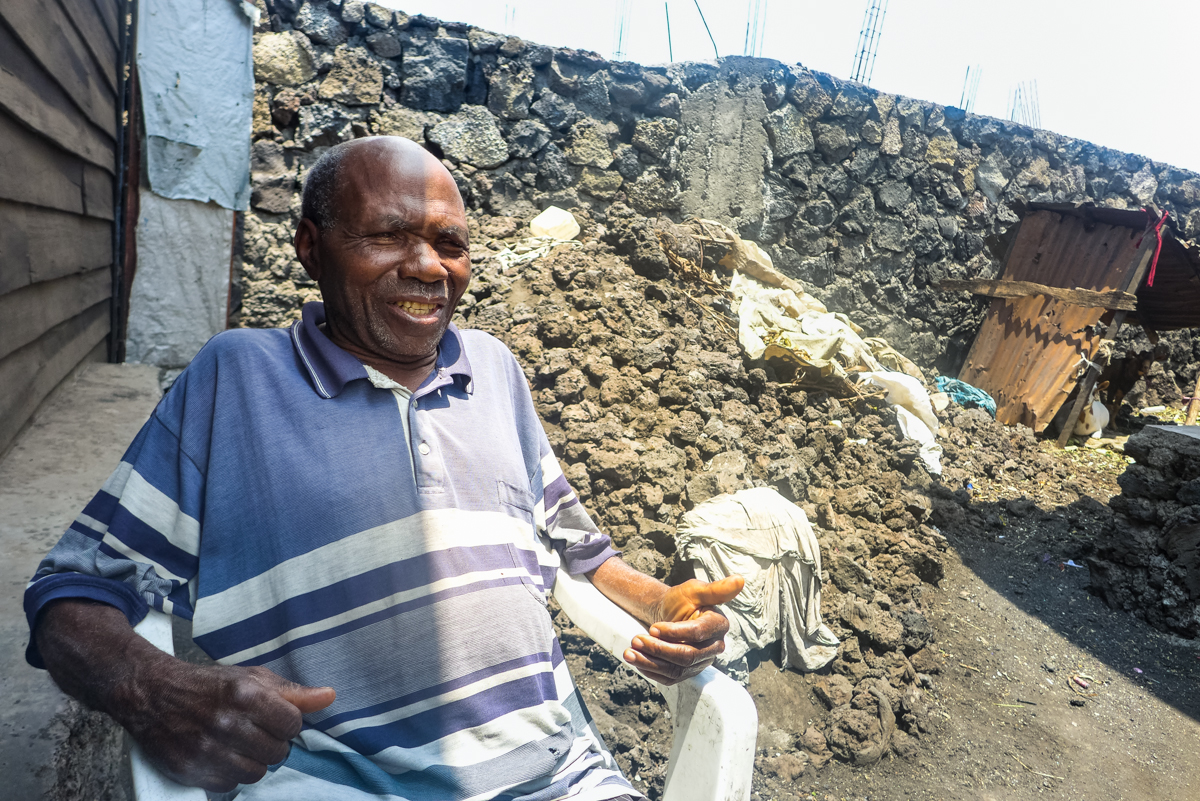 GOMA, DEMOCRATIC REPUBLIC OF CONGO — Euphrem Nzanzu leans on his walking stick and steps out of his eucalyptus-wood house. He walks to a chair his son installed out front – a true feat, given the sharp, hardened lava that surrounds the house. The 80-year-old man sits down and talks about what it’s like to live in the shadow of a volcano.

“When I heard the earthquake, I thought something was going on deep inside the earth,” he says, pointing to Mount Nyiragongo.

Nzanzu has lived in the Majengo neighborhood of Goma, the capital of the Democratic Republic of Congo’s North Kivu province, his entire life. He first saw a volcanic eruption in 1977, when the mountain sent slow, steady streams of lava through the area. He says he watched it roll by.

The eruption in 2002 was completely different.

“The place which we believed to be the lava path had changed,” he says. “The eruption was coming from different directions.”

Now, Nzanzu lives in fear of a third eruption.

Inside the Story: ‘Houses were swallowed by lava.’

When I heard these rumors I immediately knew that it was my responsibility to disclose the truth. So I took my camera and my recorder straight to the neighborhood most affected by the 2002 eruption.

“I do not think that we would survive, especially in my case, I who will not be able to run and escape,” he says.

Nzanzu is not alone in his fear. For countless Goma residents, an Aug. 7 earthquake felt like the start of a volcanic eruption.

“I was sleeping when the earthquake took place,” he says. “It was only for a few seconds but I was scared stiff, because it was the volcano that was sending a warning message and I fear the voice of Nyiragongo.”

DRC is home to a trove of natural resources, but it is also home to two of the most active volcanoes on earth. Nyamuragira and Nyiragongo are both located in DRC’s Virunga National Park, just north of Goma. These volcanoes are responsible for about two-fifths of Africa’s volcanic eruptions.

There is evidence that people who live near DRC’s volcanoes are in greater danger than those living near similarly-active volcanoes elsewhere. A report published by the World Health Organization after the 2002 Nyiragongo eruption found that, because of specific geographic factors as well as an ongoing humanitarian crisis, Goma-area residents are especially vulnerable.

A lava eruption in Lake Kivu, along Goma’s southern edge, could disturb carbon dioxide and methane stores and release “an asphyxiating gas cloud that could disperse over a wide area,” the report found.

As long as local people rely on Lake Kivu as a primary source of drinking water, an eruption could also lead to a cholera outbreak, the report stated. And civil society organizations are so weakened by a “chronic complex emergency” that long-term disaster planning is difficult, according to that report. 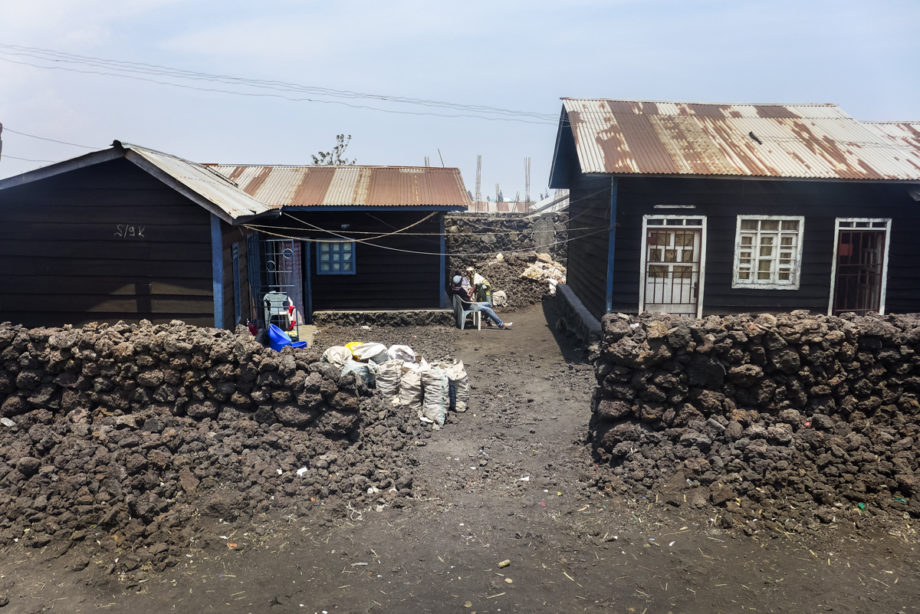 There are so many rocks made of hardened volcanic lava in the Goma region that people build fences from them.

Eastern DRC has been mired in violent conflicts for decades.

But most people who live in Nyiragongo’s path don’t know the scientific and socio-political details related to a potential volcanic eruption. What they do possess, however, are memories of the terror of previous eruptions, and the fear that it might happen again.

Nzanzu and other local residents were right to be scared during the Aug. 7 quake, says Katcho Karume, Director General of the Goma Volcanic Observatory. The quake didn’t cause any major damage, but there is a connection between seismic activity and volcanic activity, he says.

The good news is that, for now, it’s not likely that an eruption is imminent. Karume says that people at the observatory are closely monitoring activity on Nyiragongo.

I do not think that we would survive, especially in my case, I who will not be able to run and escape.Euphrem Nzanzu, 80

“We have regularly studied the volume of emitted gas and the dilation of fractures as well as magmatic evolution, and there is nothing that indicates that there will be volcanic eruption,” he says.

A lot has changed since the 2002 quake, Karume says. If another eruption is expected, local residents will have a warning.

Back in 2002, there were only two volcano monitoring stations, says Mathieu Kalire, an officer at the Goma Volcanic Observatory.

Today, there are eight stations that monitor the mountain range and the two big volcanos.

“What is certain is that today, thanks to modern technology, we are able to warn about volcanic eruption, two weeks before it is happening,” he says. “Therefore the population should not be worried because we monitor the situation day and night.”

There is now an evacuation plan in the works for the area, Karume says. The staff of the observatory is working with NGOs and the government on such a plan. Local people will be directed toward various evacuation routes, depending on how the volcano’s lava flows. People who work at the eight monitoring stations are also trained in what to do during an eruption.

Residents can also take leadership roles that will help in the case of an evacuation, Karume says. Though he says most Goma residents don’t yet know of the evacuation plan, they will make an announcement once everything is in place.

“We also consider carrying out emergency evacuation drills,” he says. “This will be done with the help of various leaders of the neighbourhood, so as to find out how people will react in case of a volcanic eruption.”

There’s a belief that a volcano will erupt about every 20 years, Karume says, but that’s wrong.

“Even though between the 1977 eruption and that of 2002 there is an interval of 25 years, this does not necessarily mean that there is an eruption every 25 years,” he says.

When that next eruption does come, he says, it will be stronger than the one in 2002.

Despite Karume’s assurances that there will soon be an early warning and an evacuation system in place, residents are still shaking from the Aug. 7 earthquake.

What is certain is that today, thanks to modern technology, we are able to warn about volcanic eruption, two weeks before its happening. Therefore, the population should not be worried, because we monitor the situation day and night. Mathieu Kalire, an officer at the Goma Volcanic Observatory

Aisha Mwajuma, a mother of five, says she jumped out of bed when she heard the earthquake and woke her children to take them out of the house.

“I was very scared that this was the beginning of another eruption,” she says.

Joseph Mbua, 40, says he was frightened when he felt the quake.

“It was at night, when I heard my house shake; I woke up immediately and prayed to the Lord to save our lives from another eruption,” he says. “This is because the last one destroyed all the property we owned.”

Mbua’s grandmother died because she couldn’t run for safety, he says. She was ill and weighed too much to be carried.

“In addition, we did not have any vehicle,” he says. “Therefore, she remained behind in the house, where she was slowly and painfully burnt to death.”

“We did not even get her ashes,” he says.