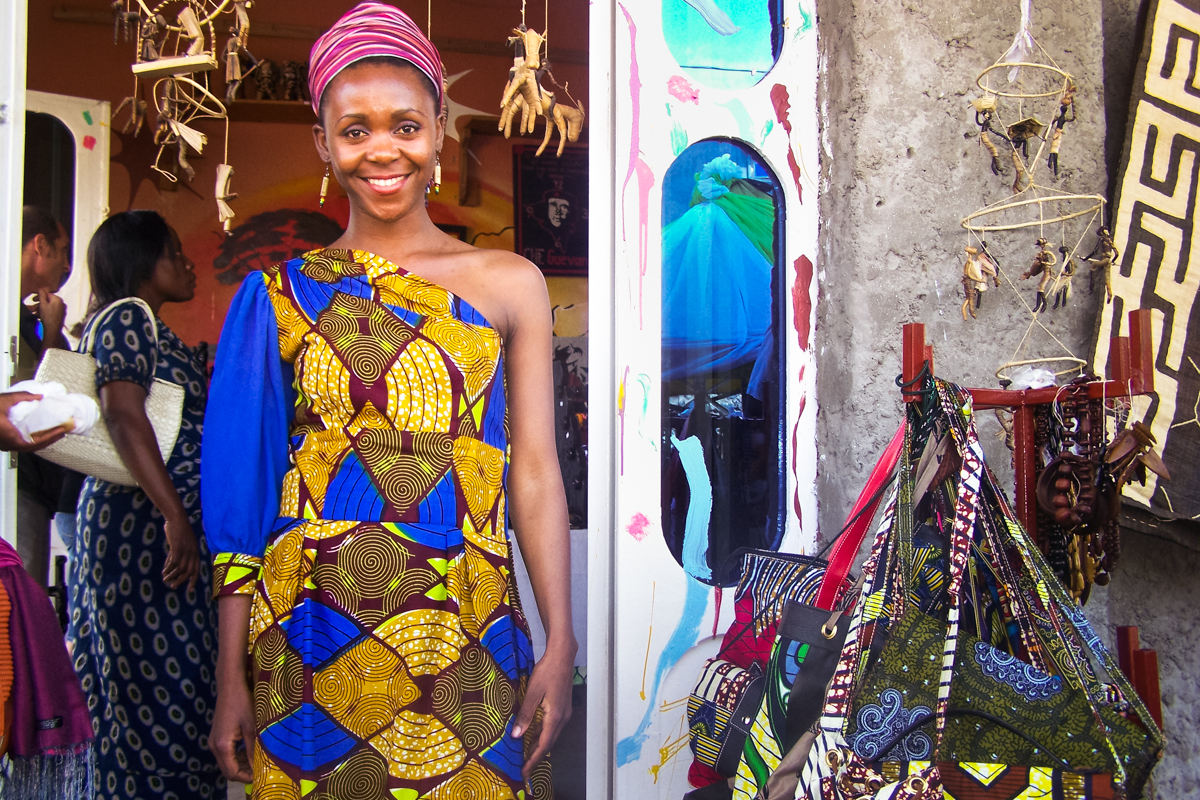 The beautiful chaos of kitenge, a thick wax cotton fabric common in East Africa, is a common sight in markets and outside small kiosks and shops here. Many women wear pagne, a traditional garment made by wrapping five yards of kitenge.

Congolese people have long been fashion-conscious, says Mapendo, 31. But when she opened her business, people were surprised that she was using kitenge in her modern designs.

Traditionally, European-style fashions have been more popular, she says. But in recent years, locals have regained their pride in kitenge.

“Some people are surprised to see how my shop has grown and the progress in my work,” she says.

Mapendo acquired her love of artistic crafts growing up in Bukavu, the capital of South Kivu province. When she was a young girl, people told her she had a peculiar way of making jewelry, she says. When she began sewing, people said the same.

Soon, people began asking her to make similar designs for them.

“Crafts have opened many horizons for me,” she says.

Mapendo has used her success to provide a platform for other local artisans who are using traditional arts in innovative ways. In March 2014, she opened a gallery attached to her shop. Today, painters, designers, sculptors, jewelers and leather workers showcase their designs at Kivu Nuru.

“We aim to give space to local craftsmen – to promote their works, their creativity, through exhibitions with a view to exposing the talents of Goma (CQ) craftsmen to the public,” Mapendo says.

The shop’s name expresses Mapendo’s desire to showcase fresh creations. It means “Light of Kivu,” a reference to the region surrounding Lake Kivu. (Goma is the capital of the province of North Kivu.)

Kivu Nuru is the first shop in Goma to sell modern fashions made with kitenge. Together with local artisans, the shop owner encourages young people to promote Congolese culture rather than European fashion.

DRC, a former Belgian colony, is heavily influenced by European culture. Since gaining independence in 1960, the nation has continued to interact with the West via Christian missionary work and international aid.

“They wanted to dress like them,” he says. “But recently, the people of Goma have understood the need to give value to the local culture.”

Like La SAPE members, called sapeurs, Congolese people strive to look their best, despite living in extreme poverty, Mapendo says. It’s not uncommon, she says, for people to spend a significant portion of their income on fashion, despite living in small metal shacks or struggling to find consistent employment.

The price difference between local and imported fashions can be dramatic. A simple cotton, button-down shirt imported from the United States or Europe can cost as much as $100 here. Shirts made from kitenge can cost as little as a few U.S. dollars, the primary currency here. Still, Congolese tend to prefer European fashions that convey status, Mapendo says.

But slowly, designers like Mapendo are helping to change the preference for European fashions.

Mapendo’s customers say she is taking kitenge-based fashion to the next level.

Kali Elavia says the kitenge fashions he finds at Kivu Nuru are courageous.

Emilie Vumilia says she has never seen another clothing shop like Mapendo’s.

“The designs she is producing reflect the beauty of our African culture,” she says.

The artisans who work in Kivu Nuru say Mapendo’s vision enables them to earn a living doing what they love.

“Mapendo encourages us to express ourselves through our artwork,” Binwa says. “It’s contributing to our visibility as artists.”

However, some visitors to the shop say they would never pay designer prices for kitenge, no matter how attractive the design.

“I would rather buy an imported bag,” says Jeanne Maombi, an economics student in Goma. “To buy this would be wasting money.”

Mapendo says she has heard that reaction before. Nonetheless, the shop is becoming more popular.

The shop has yet to become especially profitable, she says. Some weeks, she only clears 18,000 francs ($19) after paying the staff, the other artisans and other expenses.

Mapendo is heartened to see that the shop is busy throughout the day. Still, she wishes she had more buyers and fewer browsers.

“Sometimes 10 people per day come through just to satisfy their eyes,” she says.

“Imported clothes are ready to wear, unlike those made by craftsmen and designers using local fabrics, which take time,” she says.

“It’s so great to see this local style becoming popular, as opposed to imported products that are often very un-unique,” she says.

Mapendo says she is inspired by the confidence Nepo and others have put in her designs.

“Frankly speaking, I love arts,” she says. “Through my art, I now have a name in Goma. Though I do not earn much at all from my art yet, and some people do not believe in my passion, I do.”

Mapendo dreams of someday selling her kitenge clothing and designs on the international market.

“If more people had our beautiful local products, it could give value to the Congolese culture and to better our image,” Mapendo says.