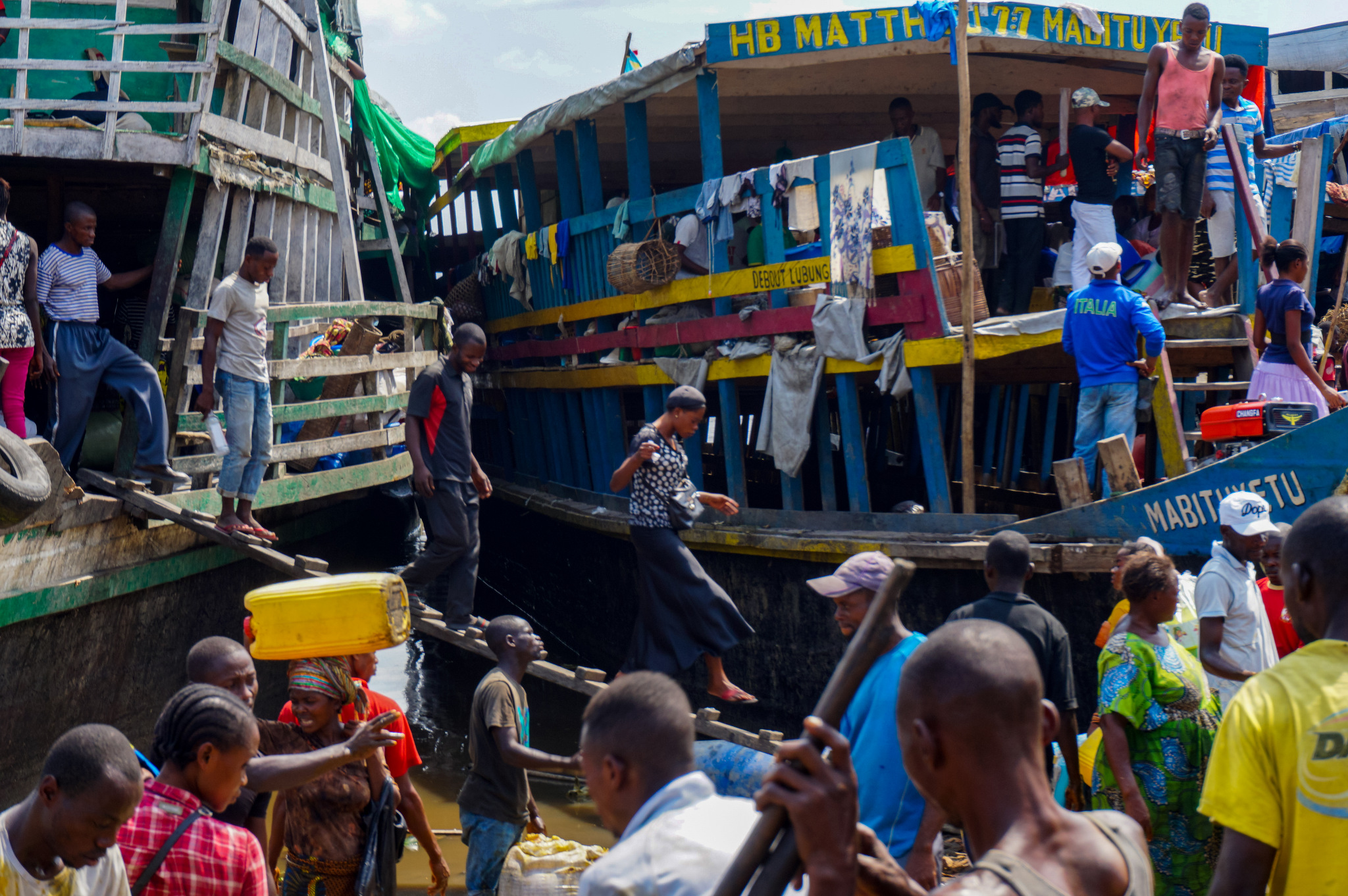 KISANGANI, DEMOCRATIC REPUBLIC OF CONGO — On a cloudless night in January, the glow of a fingernail moon above, Faida Musonge joined hundreds of people crammed onto a three-story wooden whaleboat named the Sacred Heart. She was terrified.

Musonge, 42, had worked as a merchant for a decade; she ferried slippers and other accessories to sell in Kinshasa, the nation’s capital, and returned home to Kisangani with hundreds of baskets of smoked and salted fish. The roads between the cities are all dirt and quagmires, so she paid 25,000 Congolese francs (about $13) for a seat on the whaleboat, the start of a roughly 1,750-kilometer (1,087-mile) journey down the Congo River.

The boats sometimes groan under the weight of hundreds of people — far more than they’re designed to carry — and a menagerie of goats, pigs, ducks and roosters. There are rarely life jackets on board. Along the river, there are no beacons or buoys, so boats careen down the moonlit waterway, and sometimes capsize. Last year alone, Musonge was tossed into the frigid water three times. She paddled through vicious currents to safety, clothes soaked and heavy, chest heaving. Others drowned.

This trip, she clutched her 10-month-old son, Nathan, in her arms.

The Congo River is the main trade artery between Kisangani, a port city of more than 1 million people in Tshopo province, and larger and wealthier Kinshasa to the west. More than 100 whaleboats — flat-bottomed vessels about 15 to 30 meters (49 to 98 feet) long — transport rice, oil, soap, salt, sugar, coffee, cotton, corn, fufu, fish and cement. Yet each voyage, travelers and traders fear for their lives. 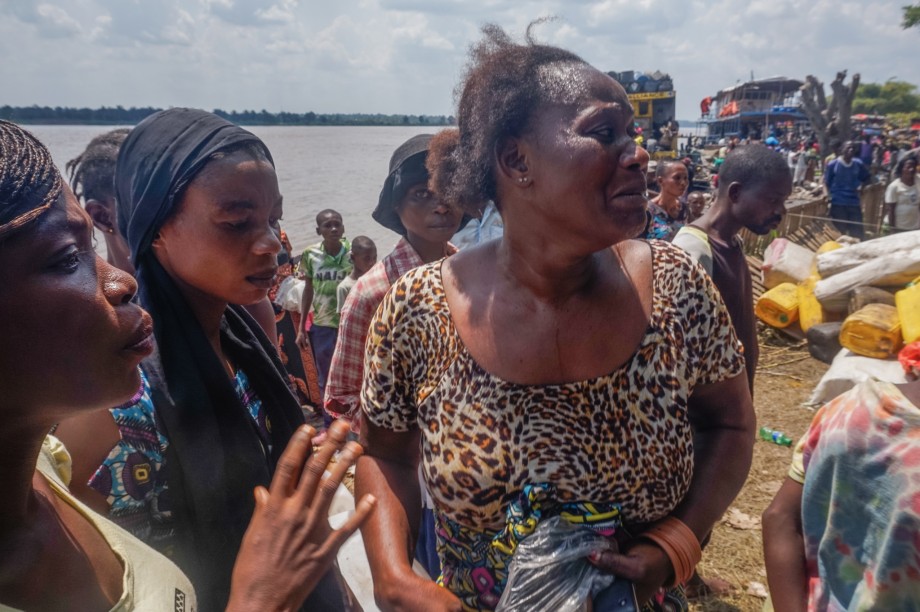 From 2008 to 2018, an estimated 1,400 people died in passenger ship accidents in DRC, according to a report by Robin des Bois, an environmental nonprofit based in France. DRC logged about 11% of these fatalities worldwide, making it the third-deadliest nation for boat passengers behind Tanzania and Bangladesh. During the same period, accidents in France, Greece, Italy, Norway and Russia combined claimed fewer than 200 lives.

“I live mainly from this trade,” says José Monga, a trader in DRC for 15 years. “But today I am scared of getting on a boat to travel down the river.”

Though vital to the country’s economy, the river trade is lightly regulated. Waterway authorities inspect the wooden boats, also called baleinières, before each trip to make sure they’re safe. But many are of poor quality and within a few years require passengers to bail water during trips, according to a study in the Journal of Development Economics.

Authorities expect captains to carry a life jacket for each passenger, says Jean Pierre Litema Yeni, the provincial transportation minister, but many can’t afford them. Some already borrow money to rent their boats or to pay for fuel, engines and tarps to cover cargo.

At nearly every stop, captains must pay fees — legal and illegal — to officials. Those can add up to as much as 14% of the trip’s costs, according to the Journal of Development Economics study, whose authors surveyed more than 100 boat operators. 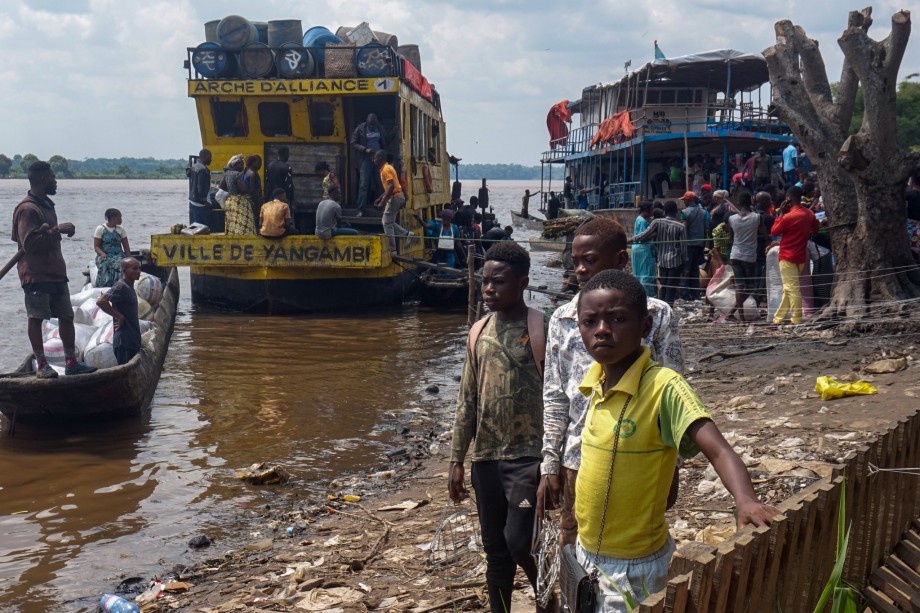 The morning after the January accident, Yannick Mastaki and Hiller Yangambi, both 14, and Assani Jojo, 12, visited the port to see the shipwreck.

Many boats traverse the river at night. That’s because some officials go home, and the drivers can pay fewer fees and pocket more money, Yeni says. But the Congo’s trees and sandbanks are tricky to navigate by moon, and the central government hasn’t installed lighting.

In 2017, concerned about the number of accidents, the government issued an order banning night trips. However, Yeni says, local waterway authorities don’t enforce it. A national transportation ministry official couldn’t be reached for comment.

On that January trip, Musonge and baby Nathan wedged onto the Sacred Heart with more than 300 people. Authorities later discovered that the manifest, which officials check before a boat departs, listed only 61 people, says local activist Mikanda Lilama. The vessel’s captain couldn’t be reached for comment. Despite the river’s perils, Musonge had no choice but to travel. Well-paying jobs are scarce, and Musonge is her family’s sole breadwinner. It wasn’t unusual for her to bring a child on the weekslong trip; she’d done so with Nathan’s two older siblings.

Just before 8 p.m., the baleinière began drifting from Kisangani to its next stop, the city of Basoko, about 200 kilometers (124 miles) west by river. This violated a curfew that the president announced in response to the coronavirus pandemic, Yeni says. Not far from the port, the vessel started to rock, likely because it was overloaded. Musonge heard splashes, cries for help. “I was caught off guard and let go of my baby,” she says. Mother and son tumbled into the water. 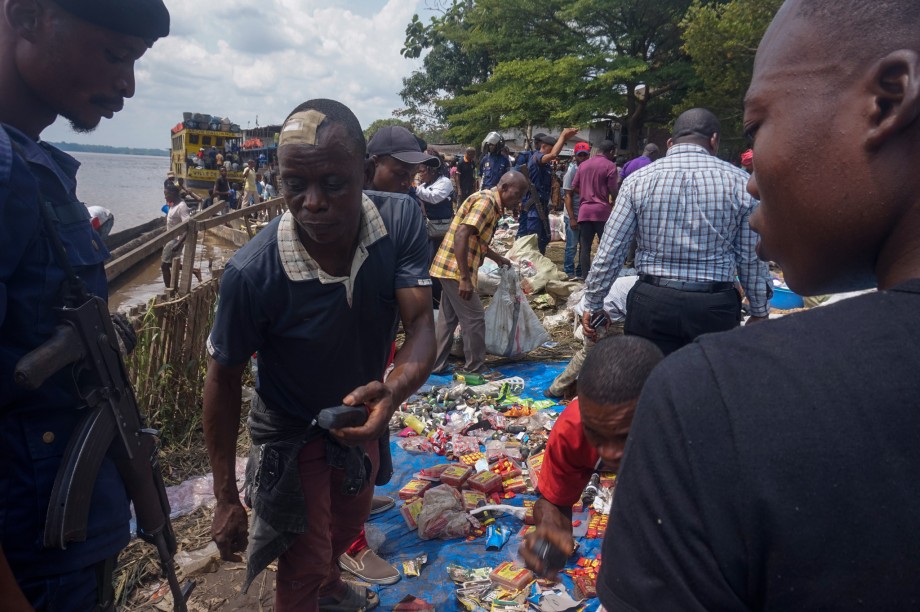 Merchant José Monga, 43, was injured in a whaleboat accident in January near the Kisangani port. “I live mainly from this trade,” he says. “But today I am scared of getting on a boat to travel down the river.”

Yeni blames local authorities’ “professional negligence” for allowing the Sacred Heart to depart in blackness. Not long after, authorities arrested the inland waterway chief officer on suspicion of colluding with boat drivers to disobey river laws. He couldn’t be reached for comment, and his successor declined to discuss the incident.

“We must combat fraud, corruption and personal interests to put an end to this terrible situation,” Yeni says.

Some merchants now refuse to travel on whaleboats and brave the roadways instead. That means they can’t make as many trips. In Kisangani, Yeni says, market prices of vegetable oil, soap, sugar and other staples have soared, and coffee and cotton are almost impossible to find. The traders fear the fate of the Sacred Heart passengers: Although 297 people survived, nine died, and 19 are missing.

The morning after the accident, Musonge was crumpled on the riverbank, her leopard-print top and multicolor loincloth now fully dry. Around her, the contents of passenger bags littered the ground: clothes, beans, cookies, sardines. The stench of rotting animals wafted from the water. Musonge wrested herself to her feet and scanned the crowd, anguish clouding her face. “I’ve lost Nathan, my baby,” she said, sobbing. She never found him.

Zita Amwanga is a Global Press Journal reporter based in Kisangani, Democratic Republic of Congo. She specializes in environmental reporting.