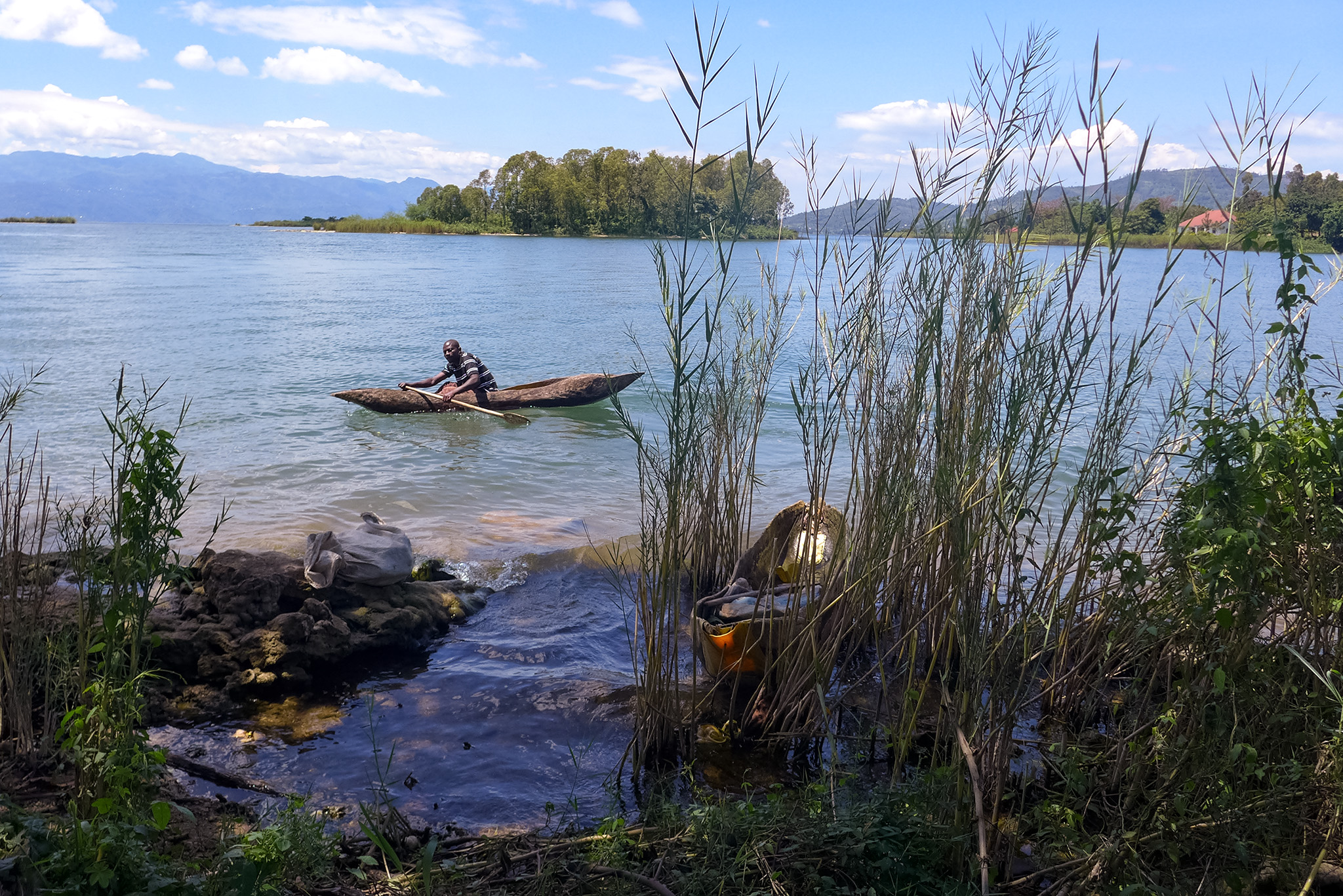 IDJWI ISLAND, DEMOCRATIC REPUBLIC OF CONGO — On the way to the port of Bugarula, the island of Idjwi appears from a distance, as waves from Lake Kivu lap the lush hills.

Wooden boats line the horizon. They carry busy fishermen, who add to their hauls or sell their catch to passersby.

Claude Bidiko, 53, is one of these fishermen. He is a member of the local indigenous Pygmy tribe, and with his wife heads a family that includes nine children.

“Every day at 4 in the morning, I come here to fish. When fortune smiles on me, I can find four to five fish, then sell two of them to buy cassava flour, and return [home] with three others, so that my family can eat,” he says.

Bidiko, however, says he can’t just rely on waters off Idjwi. He counts on his wife’s pottery and some of his older children to support his family.

“We’ve no land to till to provide for a family like mine. It’s hard for us Pygmies living on this island to survive,” he says. 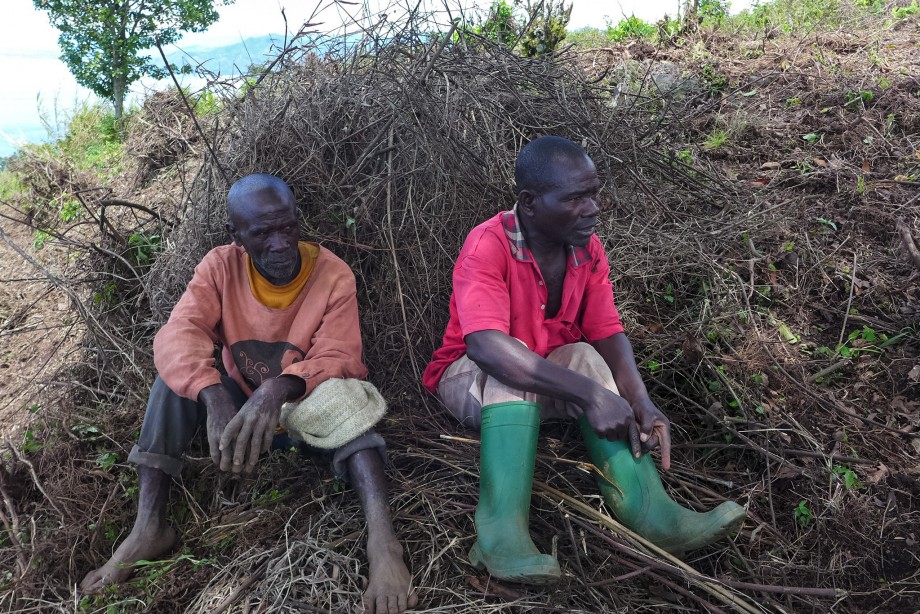 Claude Bidiko and Hilaire Bwumvikane take a break from their farm work on Idjwi Island, off the coast of Democratic Republic of Congo. The men are members of the local Pygmy tribe, known for their short stature. Bidiko and Bwumvikane have worked hard to defy discrimination and earn respect in the community.

With an area of 310 square kilometers (119 square miles), Idjwi Island is the DRC’s largest lake island, and Africa’s second-largest inland island. It is home to an estimated 298,237 people, according to estimates by La Cellule d’Analyses des Indicateurs de Développement, a government data and analysis unit. The island’s isolation shields it from the conflicts that have plagued eastern DRC for decades, earning it the nickname “island of peace.”

Idjwi has many times been home to refugees fleeing violence, especially Rwandans who survived the 1994 genocide, but migration and overpopulation have led to extensive deforestation and soil erosion.

Two communities, the minority Pygmies and the majority Bahavus, have lived on the island for decades. The Pygmy community, however, has long suffered discrimination because of their short height, economic status and lack of contact with the modern world.

Mapaka Kibunde, a 40-year-old representative of the Pygmy community in the Rubenga Chiefdom, says Pygmies were the island’s first occupants. They lived by gathering, hunting and fishing. At that time, they believed the island belonged to them and that nothing would change their way of life. But that changed when the Bahavu tribe came to the island in search of arable land.

They were soon expelled from their land and could not claim legal titles. The Bahavu now represent more than 95% of Idjwi’s inhabitants.

With few resources, little education and no experience supporting themselves in a modern economy, Pygmy society has weakened, he says. For many, poor or no education leads to fewer employment opportunities and less ability to fight for equal rights and fair treatment in the workplace. They often end up weeding fields and carrying heavy loads for Bahavu landowners who treat them with contempt.

However, some members of the Pygmy community say things are beginning to change, because a handful of Pygmy leaders have earned respect and set examples for their fellow citizens. They believe that through education and self-reliance, they can earn equal footing with the majority Bahavus.

“Today, Pygmies no longer have a place to call home and have no land to till. And as there are no more forests, their ability to hunt and harvest has practically disappeared,” says Dr. Barry Wecker, 66, a Canadian who works with the Programme International des Laics Pour la Sante, a nonprofit that aims to improve living conditions on the island and in North Kivu. He says the island population has bloomed to more than 300,000, up from 112,000 in 1996, which has caused extensive deforestation.

Worse yet, many Pygmies have never been to school.

“Their children don’t go to school, because parents don’t have money to buy uniforms and school supplies,” Wecker says. 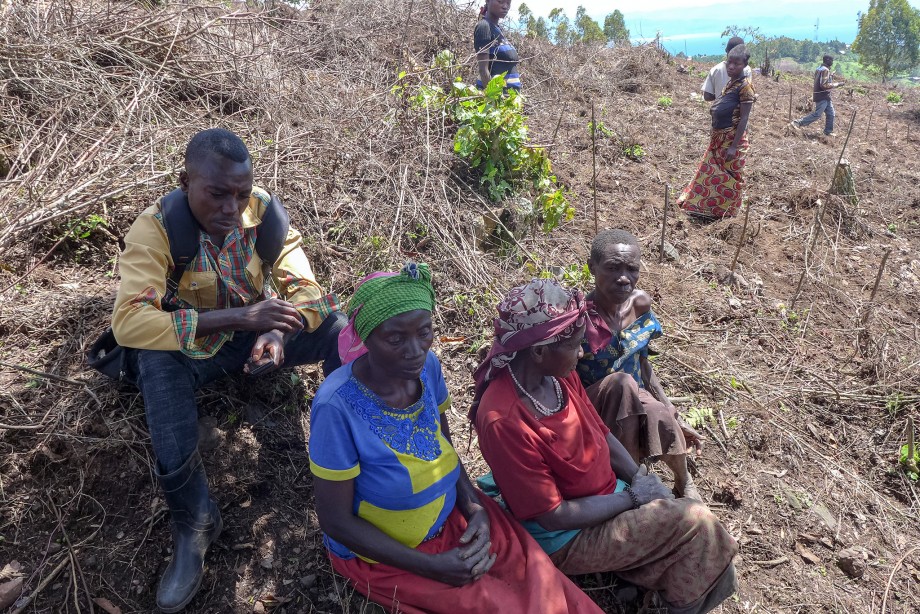 Valeur Bendera, the only Pygmy agronomist on Idjwi Island, beat the odds to earn his bachelor’s degree. He teaches agriculture to other members of the Pygmy community and mentors those who want to pursue their education.

With the help of Valeur Bendera, the only Pygmy agronomist on the island, PROLASA recently bought four hectares (about 10 acres) of land to help Pygmies learn self-reliance.

“For as long as I can remember, I’m the only Pygmy who’s continued studies right through this far, and this gave me strength to continue despite the obstacles,” Bendera says.

His parents couldn’t afford to send him to school, and he says support from well-wishers, who offered scholarships, food, clothing and lodging, helped change his life.

“I had a chance to meet good-hearted people who made it possible for me to finish my studies. Unfortunately, there aren’t many of my people who’ve had such luck,” he says.

“Here, I practice what I’ve learned at university [and] train others to practice modern farming. I believe that productivity will increase,” he says. “I take pride in being able to contribute to the development of my people, for them to be self-reliant and no longer be discriminated against.”

Today, parents do all they can to send their kids to school.

Hilaire Bwumvikane, 50, is the head of Muculo camp on Idjwi Island, a community where most residents are Pygmies. He’s father to 11 children and has been trained by Bendera. He’s also a fisherman who manages to feed his family and send all of his children to school while living hand to mouth.

“My wish is to see them finish their studies and become like Valeur,” he says, smiling.

When women are not in the fields, they make clay pots and vases to pay school fees.

Buzima Mwabidiko, 40, is a mother of nine, the youngest of whom is 6 months old. To survive, she has to make about 10 clay water pots each day.

“I can earn between 1,000 and 1,500 francs (60 and 90 cents) daily, with which I must arrange to feed my family and find one or two panties for the pupils,” she says of the added responsibility of clothing her children.

Role models like Kibunde and Bendera provide other Pygmies with incentive and inspiration. Kibunde says he didn’t finish primary school because of discrimination. However, he hopes to learn from Bendera to become a professional farmer.

“I got kicked out of school at the age of 10 because of poverty. In my time, no Pygmy could go to high school,” he says. “But I’d like to catch up in order to be someone important in my society.”