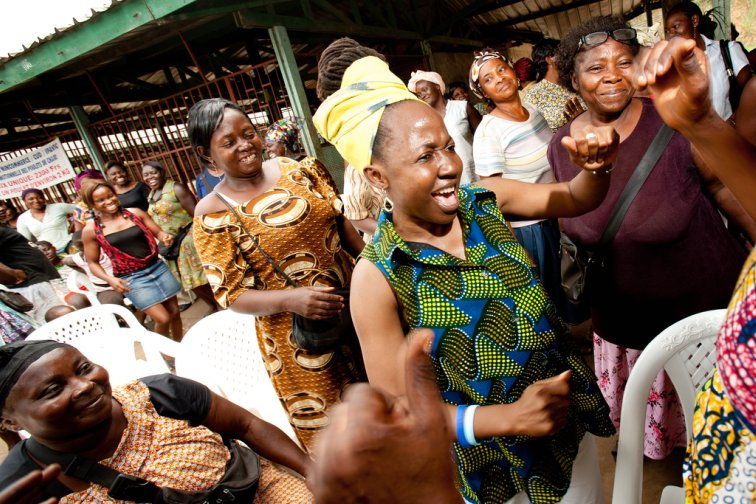 BAMENDA, CAMEROON – At every stop along the campaign trail, Edith Kabbang Walla, 45, popularly known here as Kah Walla, is generating excitement among women nationwide. Walla is the only female candidate running for president in Cameroon’s October elections.

“The interest of women in politics has been aroused, but now we want their active participation,” Walla says during a recent visit to Bamenda, a city in northwestern Cameroon.

Walla entered the national political scene in 2007 and was named by the World Bank in 2008 as one of seven women entrepreneurs in Africa. She declared her candidacy in October 2010, and the Cameroon People’s Party endorsed her in April 2011.

Tracing women’s political participation in Cameroon, Walla says that women were the first group to hold a public demonstration against colonizers in the fight for Cameroon’s independence. But she says that after the country gained independence from France in 1960 and Great Britain in 1961, women’s participation faded into playing traditional roles within political party circles instead of seizing strategic positions, such as president.

“In 1992, a woman ran for presidency, but later joined [the] presidential majority,” she says. “We saw another in 2004, but her candidacy was never accepted. So my candidacy is first to draw national and international attention as [a] woman candidate.”

She believes that her candidacy and her work in the field to get Cameroonians to register to vote have already had an impact on the community and on the way women view politics. If elected president, Walla says she plans to continue to integrate more Cameroonian voices into the decision-making process. Her three priorities are women, the disabled and other minorities.

“These people have been left out of the decision-making processes in the country,” she says.

Walla, a board member of the World Entrepreneurship Forum, an international community of entrepreneurs, says she also plans on reviving Cameroon’s economy.

“Cameroon has tremendous natural and human resources,” she says. “We have the potential to be a strong economic force on the African continent. We need to get our vibrant informal sector formal so that people can have decent work. Jobs are a major focus for my economic program. We need to take advantage of our geopolitical position to build [a] gateway into Central Africa.”

She says she also plans to rebuild social services.

“Socially, we need to rebuild our social service, health, education and security systems so that Cameroonians can have access to basic social services,” she says.

Walla, who is running her campaign under the slogan, “The time is now,” says her main supporters are youth, who have been active in her campaign. She says getting women involved is more challenging.

“Women are excited about having a woman candidate, but the challenge is to get them active,” she says. “We need to see them register, vote and seek to be voted across all political party lines.”

“I was kidnapped on the 20th of May, 2011,” Walla recounts among other obstacles to her candidacy. “I had water cannons turned on me, and I have had some forms of intimidation, too.”

She says this happens because Cameroon is a republic, not a democracy.

“The big challenge in Cameroon is that we don’t have a democracy, so people that are politically active in the opposition get harassed and sometimes physically threatened,” she says. “These aspects are a big distraction and challenge when one is running a campaign.”

But she says the biggest challenge is changing people’s perceptions about women in leadership roles.

“As a woman, the strongest challenge is getting people to see the possibility of having a woman as their leader,” she says. “However, because our male leadership has not been successful, many people see a woman as a possible change for the better.”

As women strive to become more involved in politics in Cameroon, they say the main challenges they face are intimidation and the doubt that women can hold positions of power. Political players attribute this to Cameroon’s patriarchal society, which has created deep-rooted gender roles that welcome men in the public sphere yet relegate women to the home. Various organizations are working to change this to get women more active in politics.

The percentage of Cameroonian women in politics is low. There are only 21 women members of parliament, MPs, out of a total of 180, and 29 women mayors out of 360 nationwide, Henriette Ekwe Ebongo, a Cameroonian journalist and winner of a 2011 International Women of Courage Award, said at a conference at the U.S. Department of State earlier this year. There currently aren’t any female governors, female senior divisional officers or female military generals in Cameroon.

Ambofei says she tried to run for Parliament in 2002 but withdrew from the campaign because of death threats from traditional leaders within her constituency.

Martin Fon Yembe, a political analyst and staff writer for the Political Punch, a Cameroonian political newsletter, says that many agree that Walla has what it takes to be the president of Cameroon.

“But, what is wrong?” he asks. “People say, ‘Oh things are too rough for a woman to handle,’ etc. I say, nonsense, given that Ellen Johnson Sirleaf of Liberia won elections on the heels of very wild civil war!”

But he says intimidation and foul play may obstruct Walla’s chances of winning.

“Given a level playing field, Kah Walla will single-handedly defeat the other candidates in the election,” he says. “But, alas, there is blackmail, slander, corruption and all those vices, which are already playing against her and any other female candidates in Cameroon.”

Ambe Julia is the divisional delegate of Elections Cameroon, an independent body responsible for organization, management and supervision of all election operations and referendums, in Mezam, the department that holds Bamenda.

She says there are many reasons that account for the continued intimidation and disinterest of women when it comes to politics here. She says the underlying cause is that Cameroon is a highly patriarchal society that defines the role of women as within the domestic sphere. Meanwhile, she says men have control over the public sphere and get to decide on issues that affect women directly and indirectly.

She says that when her organization is out in the field encouraging people to register to vote in the presidential polls, the women they meet say they need to seek consent from their husbands on whether they can register. Also, she says most women are farmers, so it’s usually hard to find them at home during the door-to-door voter registration exercises.

Mercy Ngwa, 26, a cyber café attendant, says she registered to vote for the first time this year.

“I have registered, and I will vote,” she says. “I have never voted before, so this will be my first time to vote, and I hope it will count.”

She says she believes that a woman president could do the job as well as a man.

“Having a woman president is a good idea, and it’s possible because women are equal to the tasks,” she says. “We have women who are as qualified as their male political counterparts.”

Julia says women constitute the bulk of members in any political party in Cameroon but that they are vulnerable because they have little access to political debates. Instead, she says they play traditional roles in their parties, such as cooking food and providing entertainment during party events.

“Women are interested but disengaged if they think their participation will be pointless,” she says. “They want to see change. If politics presents itself as a vehicle for positive change, they will want to be a part of it. They want to see practical change. They will not go into politics for just the power and prestige. Also, they need role models.”

Fon Nsoh, COMINSUD coordinator, says that the organization has been looking to engage women in politics through the Democracy and Empowerment of Women, DEW, project.

“In the Northwest region of Cameroon, in over 100 opportunities for woman to be an MP, we have had just one female parliamentarian in the past 15 years,” he says. “Through the DEW project, we are identifying and promoting women and youth candidates to run in elections. Our interest is not in pushing the agenda of any political party. We are interested in seeing women in elected positions.”

Nsoh says from field experience that they ascertain that women still have many limiting factors to overcome before they can fully participate in politics. For example, he says Cameroon’s Constitution does not set any minimum requirement for the percentage of Parliament that must be women, as other countries in the region have done.

“Some women do not trust the political environment,” he says. “That’s why we have voter apathy. Stereotypes need to be uplifted. Also, we still have many records of outright intimidation against women daring into politics by men. Election campaigns could be expensive for most women, who most times don’t have pockets as deep as those of men.”

Nsoh says that COMINSUD’s role as a civil society organization is to work hard to eliminate these barriers. He says he is hopeful that by the end of the year, they will have up to 1,000 potential women and youth candidates to run in the municipal and legislative elections in 2012.

Whether Walla wins the presidential race in the fall, she says that women’s political participation in Cameroon has greatly changed for the better thanks to her campaign. She says she is honored to have inspired other Cameroonian women to see the possibility of women actively participating in politics.

“I am honored to know that an 8-year-old pupil wrote my name as her model in a class exercise when their teacher asked them to cite the name of someone who inspires them,” she says. “I also have women who walk up to me and thank me for taking a bold step and making a statement that women can aspire and dream big dreams.”