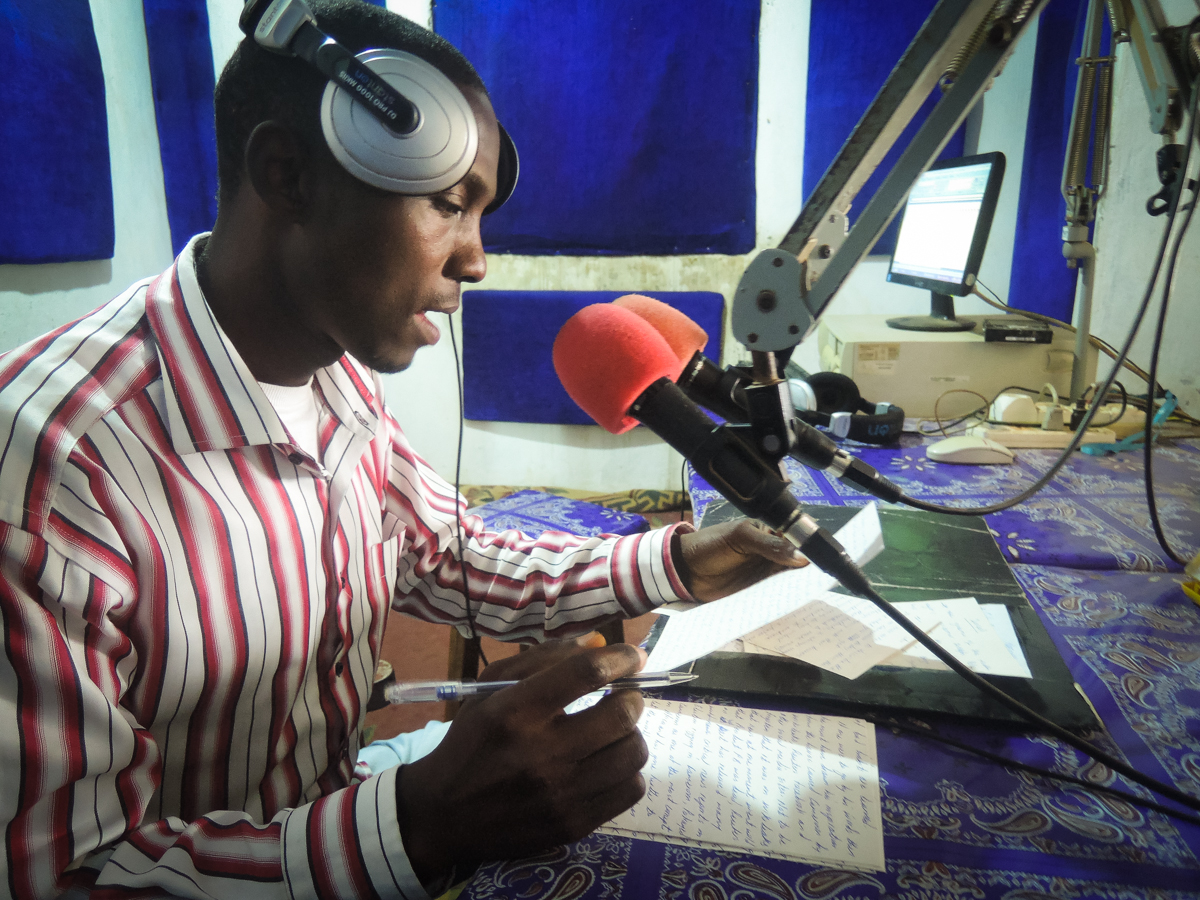 BAMENDA, CAMEROON — While riding in a taxi one day, Regina Lyiengu heard a radio report that turned her stomach.

The presenter, speaking in pidgin English, reported that a woman who had been raped was left naked and unconscious. He said the woman’s genitals looked like a “ben-ben cover pot,” a pidgin phrase meaning “twisted lid of a pot.”

Lyiengu, a journalist with the Cameroon Tribune newspaper, asked the taxi driver for the name of the radio station. The driver said he didn’t know – he’d just tuned in.

When she arrived at work, Lyiengu told her male colleagues what she had heard. She says she also complained to the Ministry of Communication.

But that incident wasn’t unusual.

“It is not uncommon to hear reports that objectify women,” Lyiengu says.

Lyiengu isn’t the only one who has noticed. Women’s rights activists say pidgin radio presenters demean and shame women, and blame them when they are sexually assaulted or harassed. Observers attribute such foul conduct to pidgin presenters’ lack of training and radio stations’ failure to edit their news reports.

Cameroon’s National Communication Council routinely suspends individual journalists and entire media organizations, often on charges of failure to comply with ethical standards. Critics of the government say the National Communication Council’s actions amount to censorship. According to Freedom House, a U.S.-based watchdog group, Cameroon does not allow a free press. While the pidgin radio shows have operated with relative freedom, the rise of complaints against them is forcing officials to monitor the stations more closely, Bassang says.

Pidgin English, which is spoken by half of the population, has been a lingua franca in Cameroon since the 1880s. Previously referred to as broken English, the language has gained prominence from extensive use in churches and broadcasting.

Each of the 11 radio stations based in Bamenda, the capital of Cameroon’s Northwest region, has at least one pidgin-language news show, says Victory Bassang, an official at the regional delegation for the Ministry of Communication. The shows mostly broadcast human interest stories, and they tend to dramatize the news, she says.

Listeners like pidgin shows because the language is widely spoken and understood, says Nelson Njouny Mokun, the manager of Foundation Radio, a private station in Bamenda. Pidgin shows are more popular than English and French broadcasts, drawing more callers and advertisers, he says.

Afrique Nouvelle FM, the oldest private radio station in Bamenda, has broadcast pidgin shows for an average of one to three hours a day since it went on the air 13 years ago, says Elvis McCarthy Akumbom, who has a show on the station.

But Afrique Nouvelle is one of the stations that portrays women negatively, says Linda Neh, a women’s rights activist.

Pidgin announcers engage in name-calling and shaming, says Neh, who focuses on women’s empowerment and democracy at Community Initiative for Sustainable Development.

This has affected the way women are perceived in society, she says. It also affects the way women respond to criminal conduct: Many do not report sexual harassment for fear of being blamed or shamed by the media.

Neh’s office last year organized training on gender-inclusive reporting for 29 journalists in the region. Among other issues, the training addressed the use of derogatory language by pidgin news presenters.

“A month after the training, I noticed an improvement in the way women were portrayed in local media, but after a while, things went back normal,” she says.

Pidgin radio announcers are more informal and given to humor than their French- or English-language counterparts, Mokun says. And sometimes they take jokes too far.

“The language used by most pidgin presenters is too foul for public consumption and, at worst, defamatory,” he says.

Mokun says he suspended one pidgin show on Foundation Radio, where he is the manager, in February 2014 after the station aired just two episodes.

“The presenter based his show on women and sex stories which portrayed women negatively,” he says.

Akumbom, who hosts a popular pidgin show, “Tori Time,” says listeners complained about his broadcasts early in his career.

“They wrote to the radio station and even met me personally to say that they were offended by some of my stories,” he says.

Female listeners were particularly upset by his broadcasts.

“Even my boss’s wife complained,” Akumbom, 32, says. “I remember one time there was a rape report I presented, and she was very bitter about the graphic description I gave about the victim’s body.”

A turning point came in 2007, when Akumbom posed as a client to interview sex workers in Bamenda brothels, he says. Although prostitution is illegal in Cameroon, he broadcast the women’s names, locations, attire and what they charged for services. As he walked around the brothels later that year, some of the women attacked him, accusing him of exposing them to danger.

“I apologized to them, and I started paying closer attention to how I treated my sources and portrayed women,” he says.

Since then, Akumbom says, he’s been much more conscious of his words, and he hasn’t had any complaints. But unethical behavior remains common on pidgin radio, he says.

For example, he says, a report on a breastfeeding campaign devolved into a discussion about the shapes and sizes of breasts.

“Stories like that may make some men laugh, but it is unfair and offensive to the female listeners,” he says. “The younger crop of news presenters seem to be carried away by the fame and are reducing pidgin news to name-calling, invasion of privacy and jokes about women.”

But Gerald Ngeh, a pidgin radio presenter, says shows like his allow for creative expression.

“Something may sound OK when said in English but when it is translated into pidgin, it may sound vulgar to some people,” says Ngeh, who hosts a news show and a comedy show.

Some English words don’t have pidgin equivalents, Ngeh says, so pidgin speakers have to be more descriptive.

Akumbom says radio station managers are partly to blame for the lack of professionalism because they bring on unpaid presenters.

But Mokun says radio stations must use volunteers to stay in business.

“The reality is that most private radio stations can hardly break even,” he says. “The managers are forced to get underpaid staff and accept the services of volunteers.”

All staffers have at least a higher national diploma — though not necessarily in journalism — and he trains presenters on the importance of professionalism, he says.

Bassang, the Communication Ministry spokeswoman, says most pidgin radio presenters aren’t qualified for their roles, judging by Cameroon’s mass communication laws. A 1990 law identifies a journalist as “any person who, based on his intellectual faculty, training or talent earns his living editing, reporting, collecting and treating information for one or several press organs.”

Bassang says the Ministry of Communication has no control over pidgin presenters because it only issues press passes to journalists who cover government functions. Pidgin news presenters do not need press passes to report human interest stories or comment on talk radio.

Bassang says they receive at least three formal complaints of invasion of privacy and lack of professionalism on pidgin radio every month, she says. Even more listeners register informal complaints.

To ensure that journalists adhere to a journalism code of conduct, the Communication Ministry’s regional delegation began closely monitoring all local radio stations in October 2014.

Further, the delegation toured all Bamenda media organizations in January 2015, educating staffers on the importance of professionalism. Bassang has not summoned any radio journalists since the monitoring started, but she says she will take decisive action if she continues to receive complaints.

“Further violations of the ethics can lead to suspension of some radio stations,” she says.

“There is still a dominant notion that pidgin is the language of the uneducated, so trained journalists hardly present news in pidgin,” he says.

That leaves pidgin broadcasts in the hands of untrained presenters, he says.

Lyiengu, the journalist who was offended by a pidgin radio broadcast, has become vocal in her criticism of radio reports that are insensitive to women.

“Station managers should also raise the bar and only recruit or accept voluntary services from suitably qualified presenters,” she says.