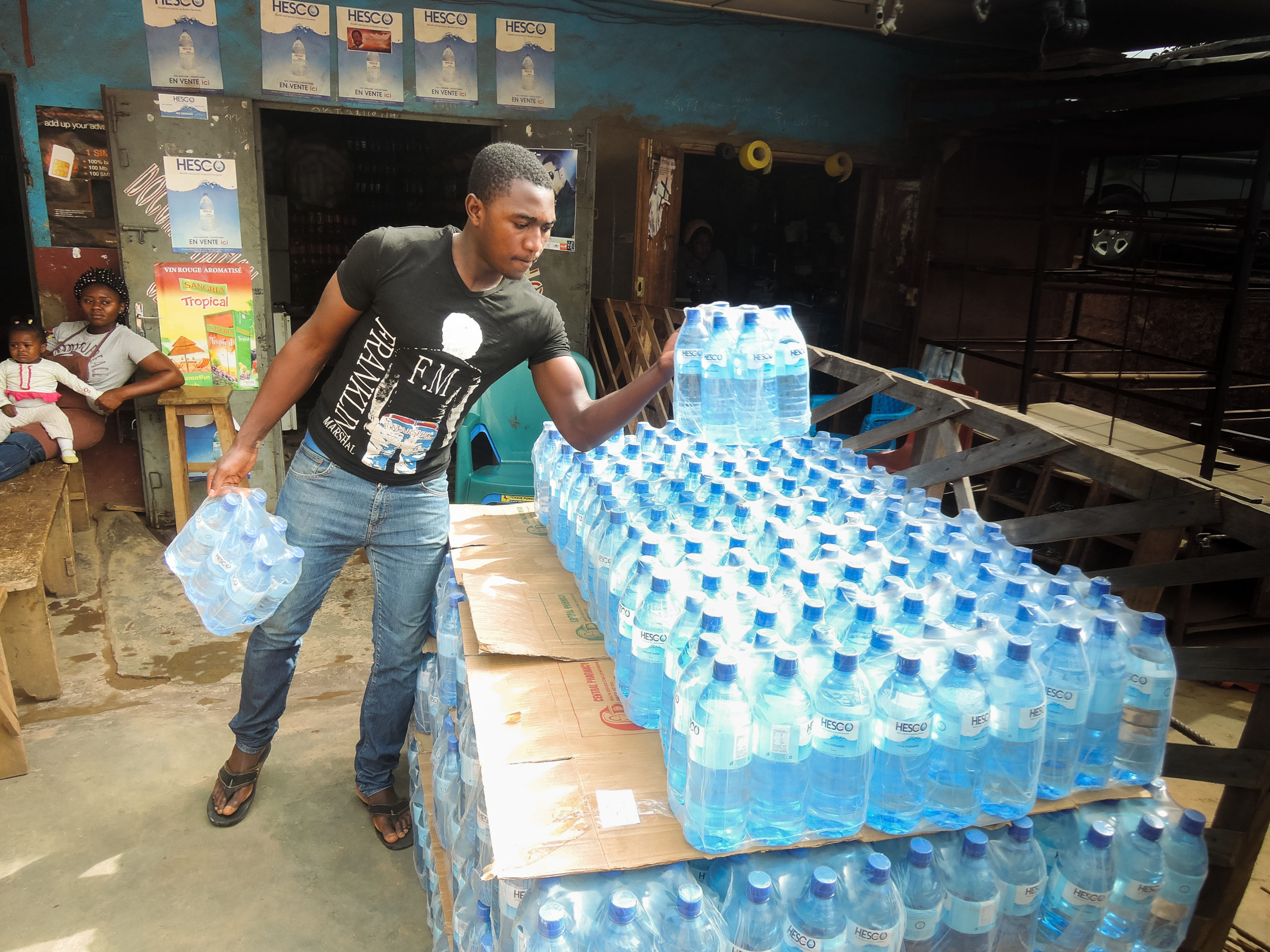 BAMENDA, CAMEROON – The unpaved road leading to the Bamenda Main Market in Metta Quarters bustles this morning. Cargo truck drivers offload supplies, moto drivers drop off and pick up fares, and merchandise hawkers call out to passers-by. Cart pushers – freelance porters – line up with their hand carts, all set to help load and unload trucks.

At 9 a.m., the heat is already scorching. A thin cloud of dust hangs in the air. As in most of Bamenda, the capital of Cameroon’s Northwest region, the water taps in Metta Quarters have run dry.

Roger Sali, a cart pusher for more than five years, has come here to rent a hand cart. Since the water shortage began, Sali has worked as a middleman, buying water from water tanks and selling it to business owners.The water crisis assures him steady business.

“I now have five times the number of clients I had before the water problem became very serious,” Sali says.

Sali’s clients include restaurants, hair salons and other businesses. Many are residential customers who do not own cars or have time to search for water. The entrepreneur advertises his services by posting notices with his mobile number on salon walls and restaurants where he supplies water.

After renting a two-wheeled cart for 300 francs (50 cents), Sali proceeds to his first client to collect empty containers. After a 30-minute trek, he finds a water tank filled from a private borehole outside Metta Quarters and purchases water at 25 francs (4 cents) per 20-liter container.

Many tanks dry up, so Sali often must walk far in his daily quest for the precious commodity.

He sees the water shortage in Bamenda as both a blessing and a challenge.

“I make more money fetching water, but at the same time, it is very stressful because I trek long distances in search of water,” he says.

A drop in volume at Ntanti Retention Dam has severely diminished Bamenda’s water supply for half a year. Camerounaise des Eaux, or CDE, the agency responsible for supplying water in Cameroon, has been unable to provide sufficient water throughout the city.

To alleviate the crisis, the army distributes free water via tankers, but it’s not enough. Many Bamenda businesses and residents must seek alternative sources.

Entrepreneurs are cashing in on the business opportunities posed by the shortage.

Some buy water from cart pushers like Sali; others buy bottled water or pay hefty sums to have their own boreholes drilled.

The Ministry of Water Resources and Energy says the crisis will ease once the rains begin this month. But even then the problem can only be fixed with overdue infrastructure changes.

When the shortage began last October, some parts of Bamenda were still getting water. Now the entire city lacks sufficient water, says Emmanuel Moki, the Northwest regional delegate for the Ministry of Water Resources and Energy.

Some households get water on some days, but others have not received water for six months, he adds.

The retention dam will rise when the rains set in, providing more water for distribution, Moki says. The rainy season usually starts around mid-March, but it is yet to begin this year.

Some households will continue to experience water shortages because the city’s water infrastructure is inadequate, he says.

“So, even if the water level in the retention dam increases, we will still have to do structural changes to upgrade the pipes and system to suit the demands of a growing city,” Moki says.

Bamenda’s population has increased rapidly since the University of Bamenda was founded in 2010, Moki says. With the university came infrastructure development and an influx of students, lecturers, business people and public servants.

In the early hours of the day, independent distributors form long queues at area water points. At one water point, nearly 17 people queue up for water.

Bottled water suppliers and companies that drill boreholes are also taking advantage of the water crisis.

Derrick Forpena, who distributes bottled Hesco Water to retailers in the Northwest region, says he now supplies twice as much water as he did before October.

“Before, water business was slow, but now, water sells like fuel,” he says.

To cash in on the water crisis, Forpena, who has been in the business since 2012, has created smaller distribution depots and new sales points. He also advertises the water on local radio stations.

The water crisis has also provided business opportunities for companies that drill boreholes.

Princewill Tafor, the CEO of Water and Habitat for All, a company that offers borehole drilling services, says he is strategizing to accommodate rising demand.

The clients include individuals, boarding schools and other institutions. Before the shortage began, Water and Habitat for All received about 10 inquiries a month for drilling services. It now receives about 40, Tafor says. The average cost of drilling a borehole is 2.5 million francs ($4,100).

To meet demand, Tafor has increased his payroll from 12 workers to 40 over the past six months, he says.

Patrick Mbah, a resident of Nkwen neighborhood in Bamenda, says he spends 40,000 francs ($66) a month on bottled water. Before the crisis, he spent 10,000 francs ($16) monthly on CDE water; he no longer pays CDE because he is not receiving water from the agency.

The Nkwen neighborhood was already experiencing a water shortage before the citywide crisis started.

In a quest for a permanent solution to his home’s water supply problems, Mbah contracted borehole drillers in September 2014.

The borehole was to cost Mbah 2 million francs ($3,300), but the contractors repeatedly encountered challenges, requiring him to spend more and more money, he says. Once completed, the borehole produced water for a while but dried up as the dry season persisted.

The water shortage has opened a platform for adventurers in the field who exploit residents’ desperate need for a sustainable supply of clean water, Tafor says.

“There is a very high demand for water services and due to this desperation,” Tafor says. “There are many people posing as magicians with magic solutions to the crisis.”

In a day, the unit delivers about 51,000 liters of water drawn from a catchment in the city. The number of recipients varies by day and neighborhood; on some days, the unit serves more than 70 people.

The rescue unit intervened in December and will keep operating until the crisis ends, Afuh says.

CDE rations what water it has to distribute, shifting service from one area to another for up to a day at a time.

A more comprehensive solution is coming. The Cameroon government has contracted a Chinese company to upgrade Bamenda’s water pipes. All the city’s pipes, which are 350 millimeters in diameter, will be replaced with bigger ones to ensure an adequate water supply throughout Bamenda. Work began in September 2014.

The company has already conducted surveys and feasibility studies and is expected to start the work soon, Moki says. The project will take four years.

In addition to upgrading the pipes, the company will extend the infrastructure to enable CDE to draw water from some lakes in the Northwest region, including Lake Awing and Lake Bambili, as well as the Ntanti Retention Dam.