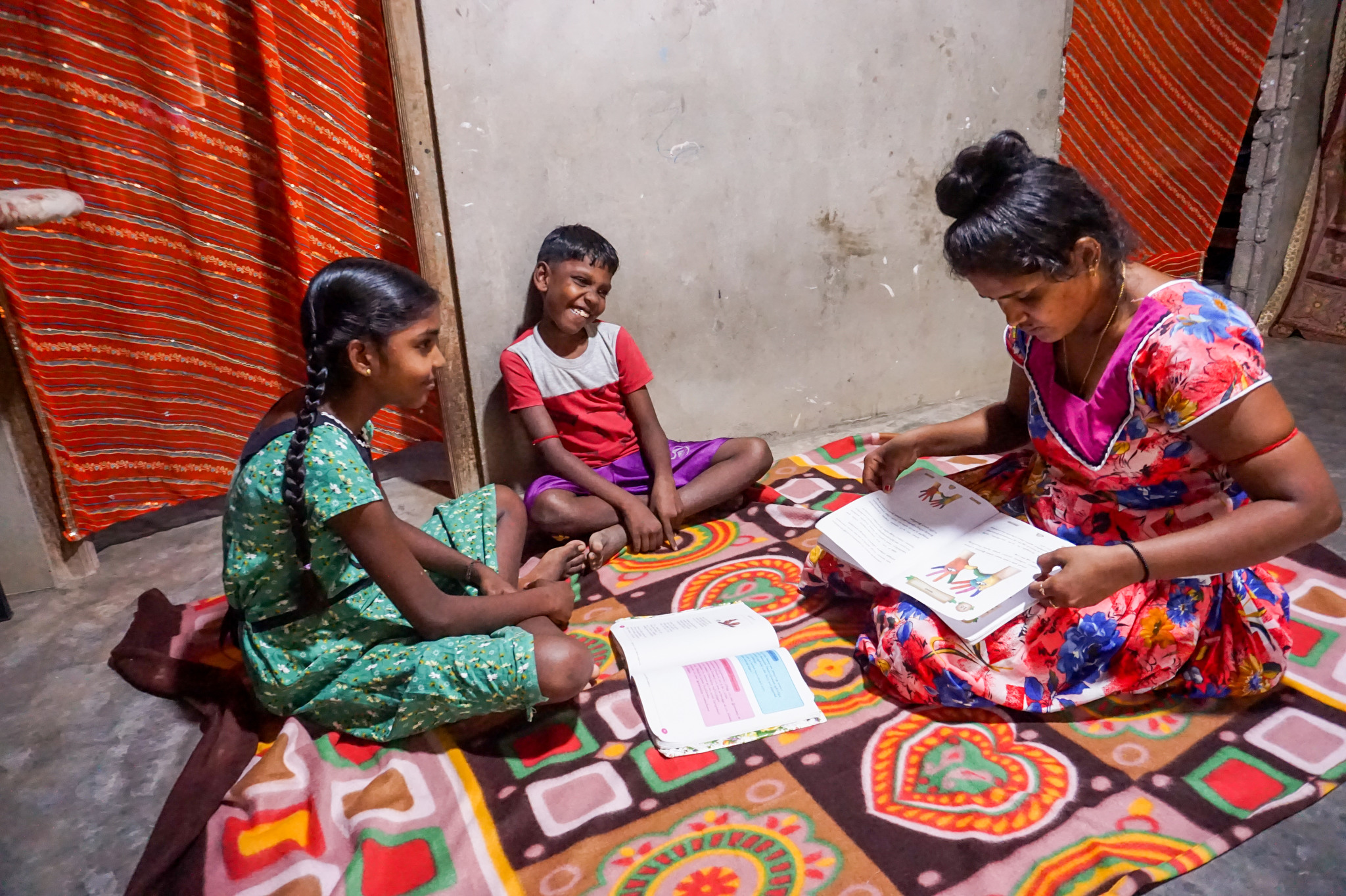 KIRISTHAVAKULAM, SRI LANKA — Under an electric light as rain falls on the fields outside, Siventhiran Subasini sits down with her children to review their homework before dinner.

She spent two years dreaming of this simple scene.

In May 2019, she left her children with her husband and mother-in-law, who moved into their two-bedroom home, and flew to Qatar to work as a maid and nanny for a family with two young girls.

“I have never taken care of my own children like I took care of them; I had to be with them all the time,” Siventhiran says. “That concerned me a lot. I even cried thinking about it.”

She sent home 50,000 Sri Lankan rupees ($247) a month, more than her husband’s income as a mason. In August, she flew home for what was supposed to be a two-month visit, but after an emotional reunion with her 8-year-old son and 11-year-old daughter — and with no signs of the pandemic ending — she decided to stay and focus on her own family rather than earning more money caring for someone else’s children. It’s a pattern playing out across the country, with economic consequences and familial benefits.

From 2001 to 2020, about 8% of Sri Lanka’s annual gross domestic product came from overseas citizens sending money home, including tens of thousands of women like Siventhiran, working as domestic helpers in the Middle East. But the numbers of these workers and monthly remittances dropped dramatically in 2020 and 2021, due to a combination of pandemic travel restrictions and reassessed family priorities.

The number of people who left the country for foreign employment fell by nearly 74% in 2020 compared with 2019, according to the Central Bank of Sri Lanka, which handles these payments. The Sri Lanka Bureau of Foreign Employment calculates that 61,489 women went abroad for domestic work in 2019, a number that dropped to 15,388 in 2020, then inched up to 25,763 in 2021. 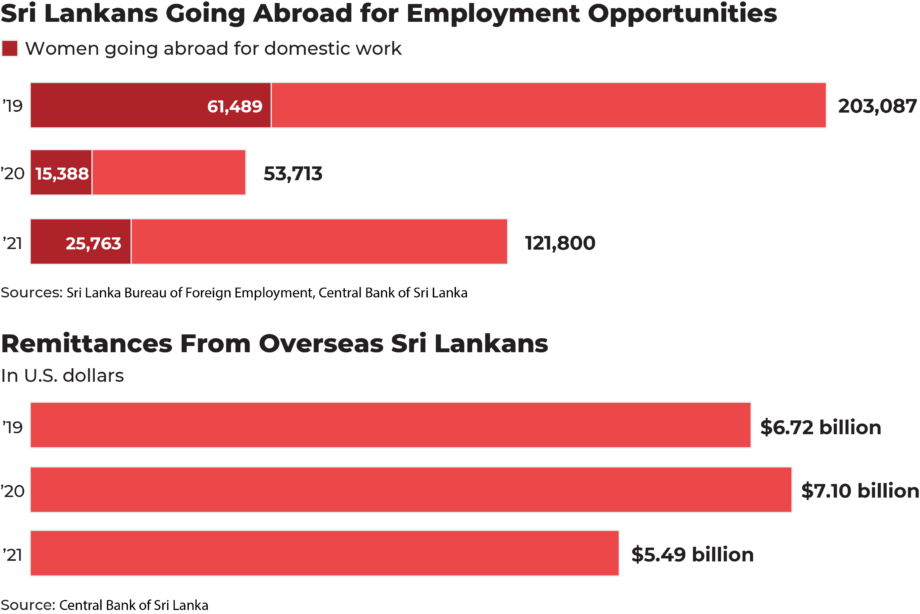 This trend has caused an economic setback for the country, adding to the pandemic’s negative impact on tourism, foreign investment and exports, says Kopalapillai Amirthalingam, an economics professor at the University of Colombo. Hoping to incentivize more workers to return overseas and resume monthly remittance payments, the Central Bank announced a bonus offer of 10 rupees (.05 cents) for every United States dollar sent home between December 2021 and April 2022.

Yet some research indicates that in terms of children’s health, safety and academic outcomes, Sri Lankan families may benefit from mothers staying closer to home.

A study published in the Sri Lankan Journal of Business Economics in 2021 noted that a parent’s migration can have positive and negative effects: an increase in household income that can then be spent on education and health, on the one hand; the psychological cost of family separation on the other.

Remittances from migrant workers provide better education, health services, nutrition and more for the families back in the home country, according to a 2021 study published in the International Journal of Children’s Rights. But according to the same study, in Pakistan, children of migrant parents were “regular victims of harsh treatment and physical abuse by adult family members.” 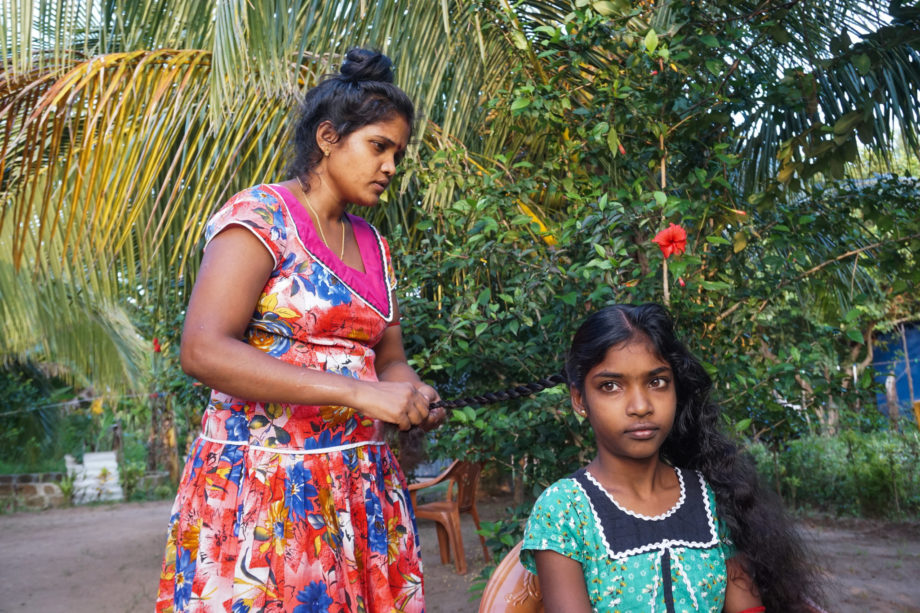 After two years working as a domestic helper in the Middle East, Siventhiran Subasini enjoys being able to braid daughter Tharbika’s hair again.

Sivakumar Mariyamma’s youngest child, Vithusa, was just 3 years old in 2012 when she went to work abroad for the first time, after her husband left her. While her parents cared for her four children, the single mother worked in Kuwait and Saudi Arabia, growing her income from 25,000 rupees ($123) to 60,000 rupees ($296) a month and managing to save 700,000 rupees ($3,455) total for her family’s needs.

She came home for a two-month leave in November, intending to head out again in February. But “the disease is spreading more and more, and my parents are also old,” Sivakumar says, adding that she’s also concerned about the risk of violence and child abuse in her town. “Safety of my daughters is important, so I have given up the decision to go abroad.”

“I’m glad my mom is with me,” says Vithusa, now 13, although she says she also loved being cared for by her 70-year-old grandmother.

Government agencies and social services, recognizing that the number of women going abroad may not return to pre-pandemic levels, have begun to offer alternatives. The Sri Lanka Bureau of Foreign Employment offers 50,000 rupees ($247) seed funding for women who have returned from working abroad to start a small business. The Ministry of Women and Child Development, Pre-School and Primary Education, School Infrastructure and School Services offers local job training for mothers, to prevent them from feeling pressured to leave their children behind for job opportunities overseas.

Both Sivakumar and Siventhiran have accepted the incentives. Sivakumar plans to set up a chicken coop and raise chickens as a source of income. Siventhiran has purchased a sewing machine and is learning how to work as a seamstress. 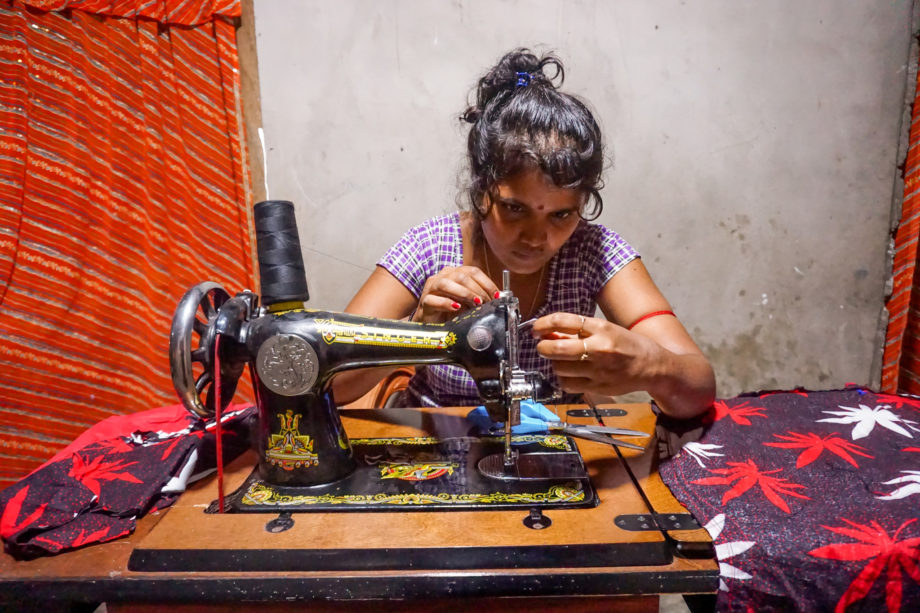 Siventhiran Subasini sews on her home sewing machine, which she hopes will provide enough income to make up for her decision to decline work opportunities in the Middle East.

Siventhiran says her Qatari employer has tried to contact her through WhatsApp many times to urge her to change her mind, but she has stopped responding. Her own family was able to save 600,000 rupees ($2,960) from her two years abroad, she says, which is enough for her to stay home and try another livelihood for at least the next year.

Her husband, Sivapalan Siventhiran, admits the loss of his wife’s remittances has added to his stress and anxiety. Their monthly income has dropped to the 30,000 rupees ($148) he earns as a mason, well below the median family income of 43,511 rupees ($215), according to a 2016 government survey.

“I struggle individually,” he says. But he weighs that against something less quantifiable: his wife and children are happy. “It’s good to live together as a family, even if the income is low.”