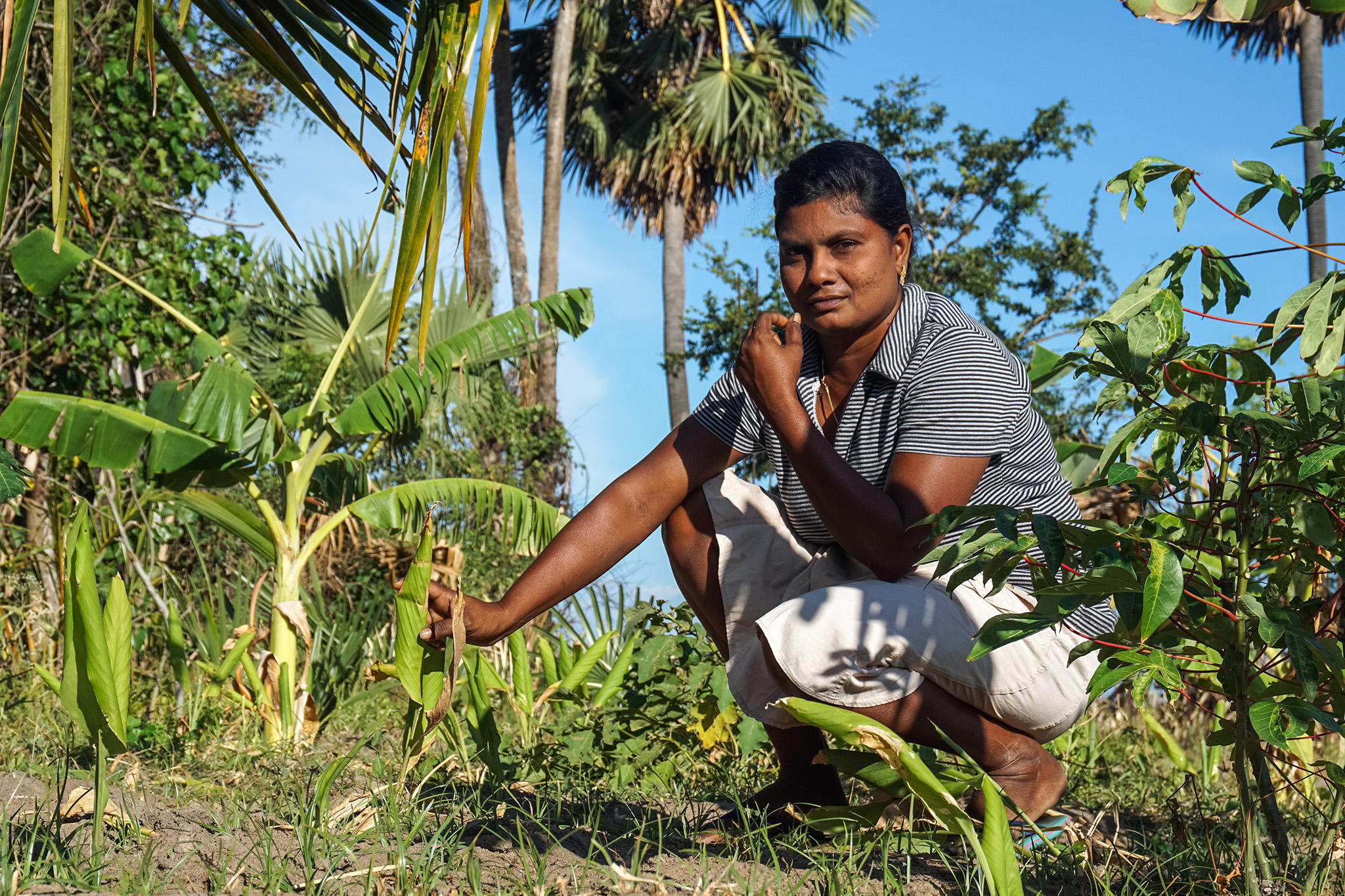 MANNAR, SRI LANKA — Sanchon Salamon Thuram scours his books on microorganisms, surrounded by garden equipment, a dog and a cat. The house is quiet; the 76-year-old lost his wife several months ago and wanted to die too.

But gnarled knubs of turmeric have become his salvation. He grows coffee and, alongside a growing number of aspiring home gardeners, recently added the ginger-looking plant.

This stretch of the country’s far north, filled with jackfruit trees and rice fields, dries up annually due to drought. But the green sprouts of earthy, fresh turmeric are ideal for this temperate zone and thrive in a shady area of Salamon’s garden. “I am thinking of planting an acre by next year,” he says, wearing a crumpled white cap to protect himself against the burning sun.

The Sri Lankan government hopes other idealistic gardeners follow suit. Officials banned the import of turmeric in December 2019 to encourage domestic production of an item considered essential to many Sri Lankan meals and rituals. While the ban has spurred interest among amateur gardeners, it also sparked a shortage that has fueled smuggling and driven up prices of the prized plant.

The pandemic has made turmeric even more desired, since many Sri Lankans use its vibrant orange root as a home remedy to boost the immune system and ward against illness. But the government’s attempt to turn it into a cash-crop is meeting with a daunting reality: Farmers can’t keep up with demand. The country is scrambling for turmeric. 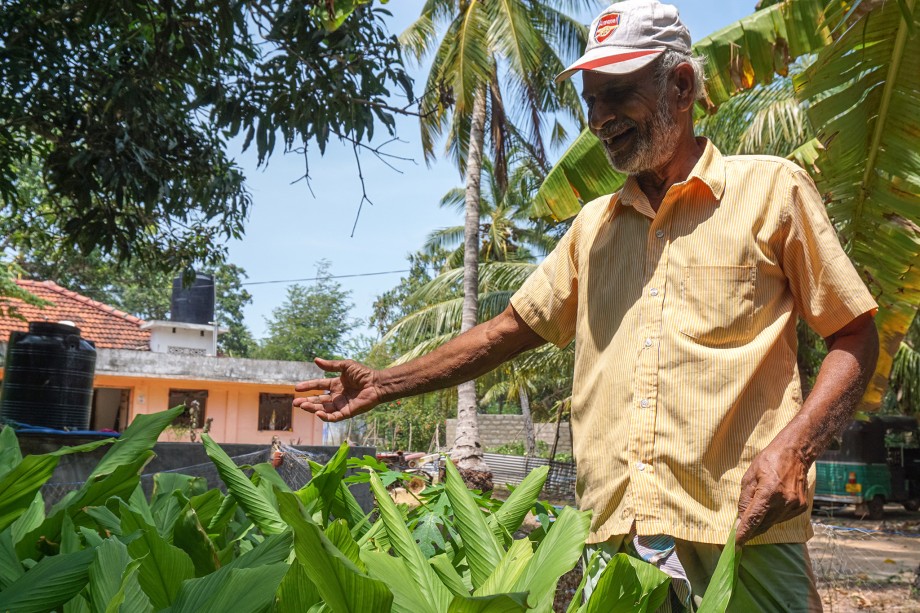 Sanchon Salamon Thuram tends to his turmeric plants in northern Sri Lanka. The government is encouraging production by aspiring gardeners like him.

Officials are betting on residents’ “strong interest” in growing turmeric in home gardens, says Dr. A.P. Heenkenda, director general of the Department of Export Agriculture. “We hope that, along with large-scale cultivations from January to May… [home gardeners] should help us achieve self-sufficiency by the end of 2021.”

Sri Lanka needs to produce about 6,000 metric tons of turmeric a year to meet its own needs, Heenkenda says. It currently produces a third of that amount.

Turmeric is entwined with Sri Lankan society, particularly Tamil traditions and culture. Virtually no kitchen lacks turmeric. People rub its paste on their skin, pour its powdered form into curries, and spray it as a disinfectant around the house.

Sri Lankans use ground turmeric in a remedy to cure measles and skin diseases. Some mix turmeric powder with heated oil and apply it to infected fingernails or other wounds. Others wash vegetables with it and use the spice to warm the body when they are ill. Hindus purify themselves with turmeric water at temples and during religious events.

Surging prices led the government to cap turmeric sales at 750 rupees (around $4) for a kilogram (2.2 pounds). But that has not stopped people from growing turmeric plants like they would flowers.

Around 50 saplings peek up from soil in Mathanaventhan Chandra’s small garden next to her open-air home with a thatched roof. The mother of two girls sells plants for 70 rupees (37 cents) each. 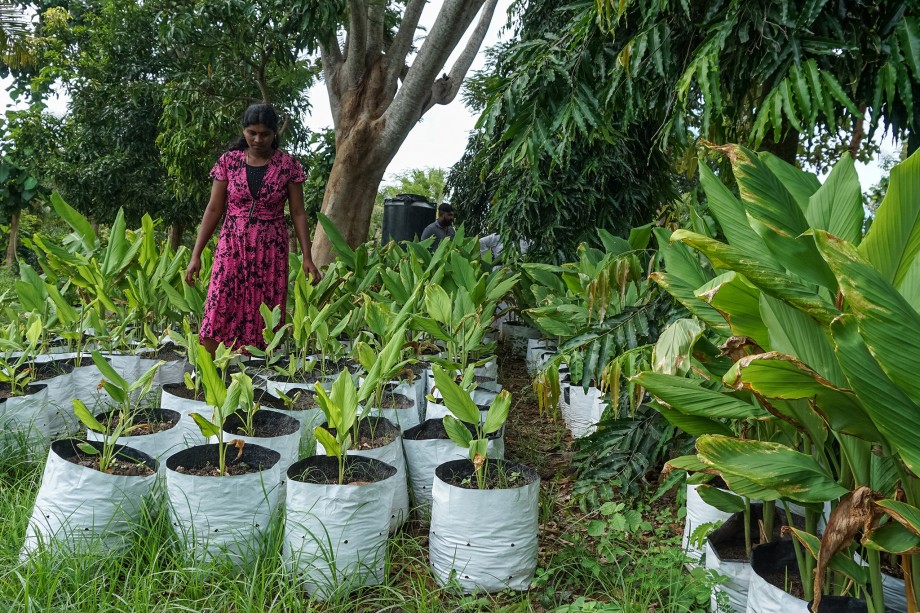 Renil Lugia helps cultivate turmeric at a farm in Mannar, in the north of the island. Turmeric is integral to Sri Lankan food and rituals. It has become even more popular during the pandemic as a remedy to boost the immune system.

“Turmeric flower smells good and when I walk into the garden it makes me very happy,” she says, her face glowing with pride. Chandra dreams of building a house with a lavish garden that produces only the pungent plant.

But efforts like Chandra’s have yet to cover the shortage. Authorities once patrolled the coasts for marijuana smuggling operations. Now they look for turmeric.

Turmeric smuggling is especially rampant here in Mannar, just across the Gulf of Mannar from India. The Sri Lanka Navy captured more than 6,000 kilograms (13,227 pounds) of dried turmeric in October in coastal areas, following a September investigation that found nearly 3,000 kilograms (6,614 pounds). 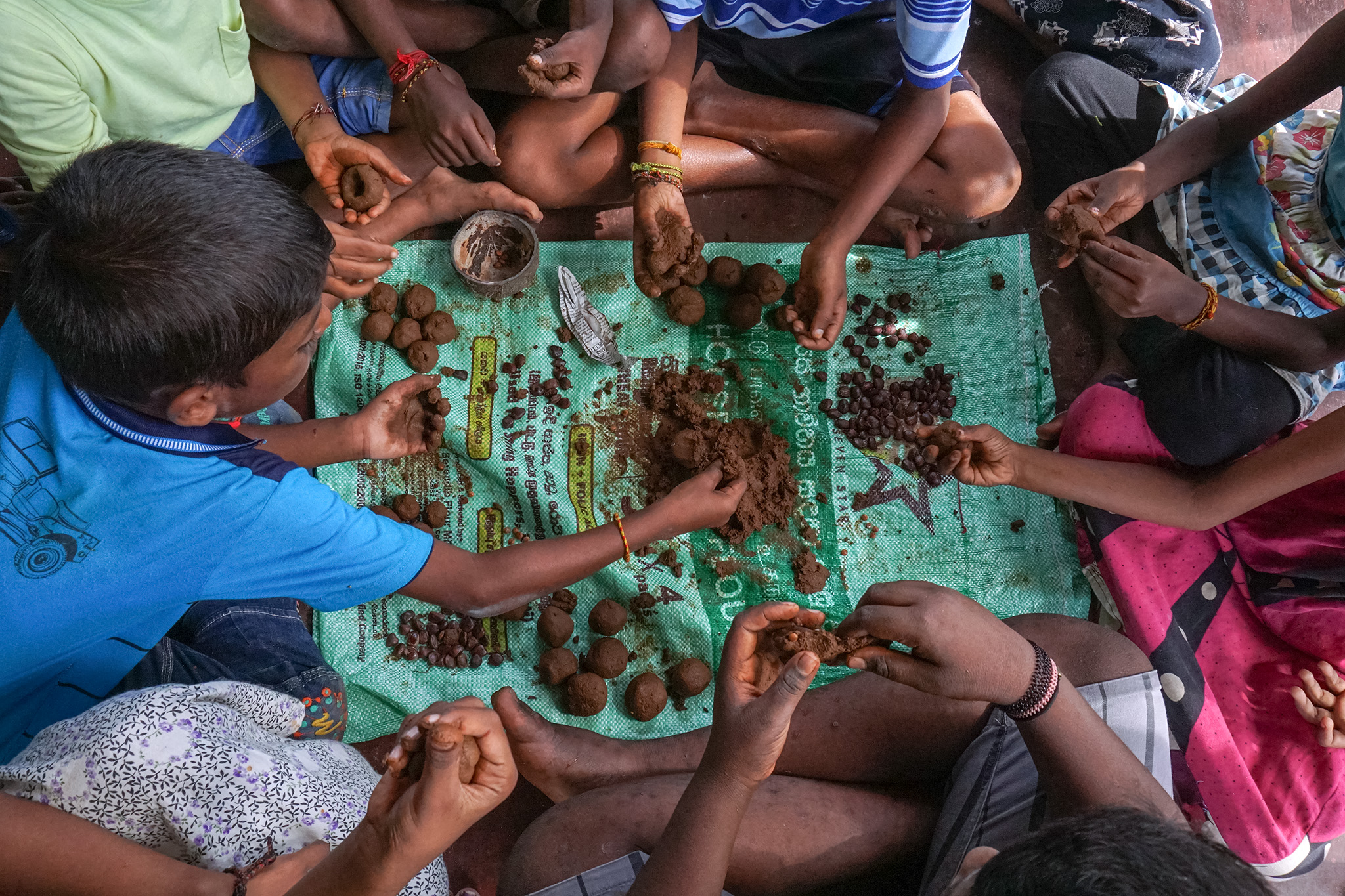 Some residents are skeptical about the government’s promise of self-sufficiency. “Turmeric cultivation is new to our area,” says Mariyaraja Nixson, a Mannar farmer. “There is no need to rush and ban [imports].”

The government argues Sri Lanka needs to stop relying on others for one of its key ingredients. Officials say they’re making it simple for people to grow the plant by offering training and providing hundreds of bags of seedlings at low prices.

“Out of every 100 houses, 95 produce turmeric, which means there are about 20,000 to 25,000 seedlings,” says Iruthayanathan Aljin Croos, the horticultural agriculture curriculum officer for the Northern Provincial Council’s Department of Agriculture. “People started showing interest in cultivation when there was a shortage of turmeric in the grocery stores. It is likely to become a cottage industry in the future.”

The frenzy has caught on with Seemampillai Jeyapalan, who also is betting on the future of Sri Lankan turmeric.

Jeyapalan runs a training farm in Mannar that provides employment to 14 people from nearby villages. The farm is full of bananas, guava and pomegranates. Turmeric plants now grow under the shade of mango trees.

“We are not worried,” says Jeyapalan, who supports the ban. “The country will not grow if it depends on others.”