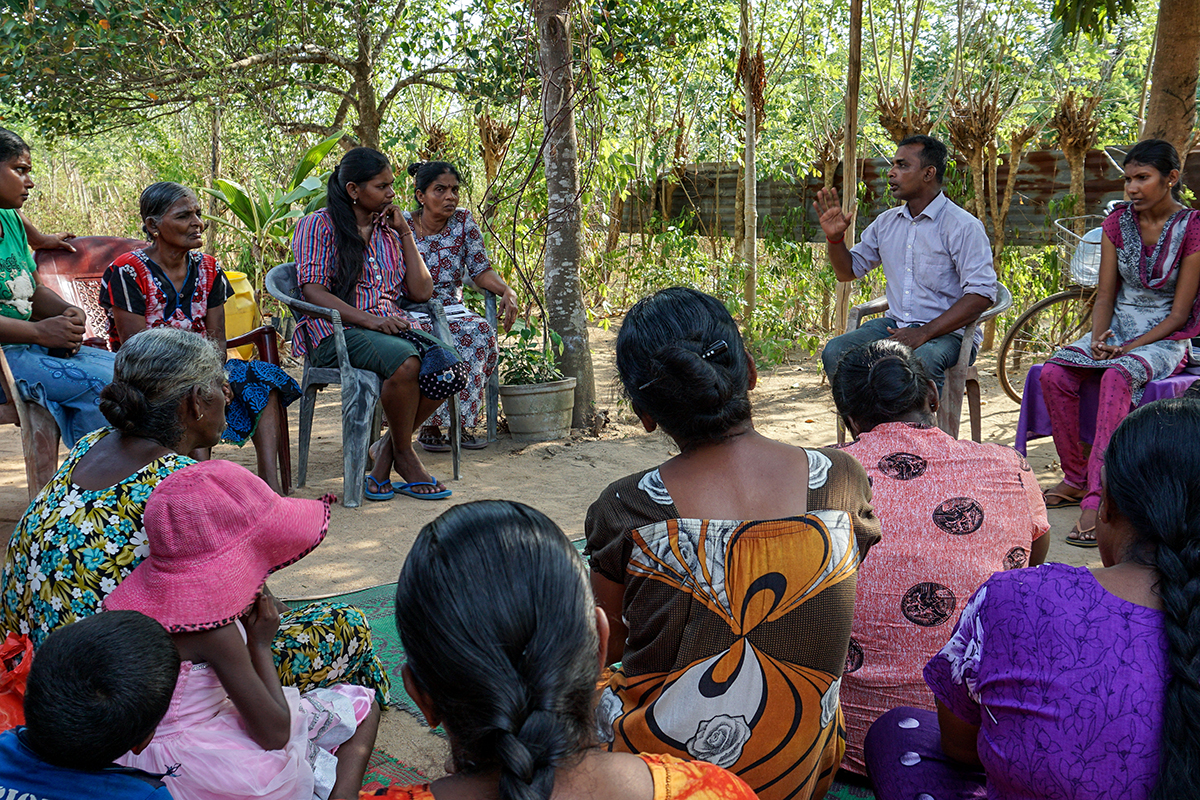 VAVUNIYA, SRI LANKA — The quiet Sunday morning was broken by shouting and banging on the gate. Thayakaran Jayanthikumari peeked outside. It was a loan recovery officer from a local leasing company.

Jayanthikumari stood frozen inside the house, listening to the man call her name. Her neighbor went outside and told the man Jayanthikumari wasn’t at home.

“You know who I am, don’t you? She is always not at home. Tell her that I came!” he shouted, then left.

Inside, Jayanthikumari breathed a sigh of relief.

“When we fail to repay more than two installments, he comes home and scolds us with bad words,” she told a GPJ reporter, who was with her at the time. “Now I don’t have money to repay him, and that’s why I did not go out of the house.”

Jayanthikumari, 29, took out her first loan of 50,000 Sri Lankan rupees ($274) to buy stock for the small grocery store she operated until May. She’d already invested 150,000 rupees ($823) she earned while working as a maid in Jordan and Saudi Arabia. But most of her customers bought food and supplies on credit. When the time came to restock, she didn’t have enough cash on hand.

That’s a tall order, considering that Jayanthikumari’s family lives on the 30,000 rupees ($165) her husband sends home every month. He works in a restaurant in Colombo, Sri Lanka’s commercial capital.

Often, the lending companies that offer microloans don’t disclose interest rates, says Nadarasa Thevakrishnan, who campaigns for regulation of the microfinance industry in northern Sri Lanka. In some cases, they claim that the annual rate is between 22 and 29 percent, he adds.

Microloans have enjoyed widespread praise from people with an interest in international development, including Bill Clinton and a host of other politicians and celebrities. But an increasing body of research in the past decades points to evidence that microlending programs can lead to increased, rather than decreased, poverty. There’s ongoing debate among international development experts about how the microfinance industry can best help low-income people around the world. World Bank researchers, in a paper published in 2017, acknowledged that microloans geared specifically toward entrepreneurship are often less than transformative.

A statement from Sri Lanka’s Cabinet of Ministers in July 2018 estimated that annual interest on microloans varies from 40 to 220 percent. Such loans are easier to obtain than loans from state banks, which usually offer lower interest rates and longer repayment periods.

Thousands of women in Vavuniya district, where Jayanthikumari lives, have taken out microloans, Thevakrishnan says.

“They imagine that they can earn and pay it off, or they have an illusion about expanding their business, but in the end they are just caught up in the loan,” he says.

Jayanthikumari says she got her first microloan within three days, but when the time came to make her first payment, she didn’t have the money. She took out another loan to repay the first, and another, then another. She closed her shop in May.

“I feel so desperate thinking why I had to take this loan,” she says. “We obtained this without realizing that we will be unable to pay.”

Even though the loans are exploitative, Thevakrishnan says that when his organization, the People’s Forum for Social Awareness, first demonstrated against microloans, women protested. But before long, he says, enough women shared Jayanthikumari’s desperation.

“People have understood their condition,” he says. “People are trapped, and they are unable to free themselves on their own.”

More than 90 companies that offer microloans are recognized by the Central Bank of Sri Lanka, including microfinance companies, banks, credit cooperatives and other financial agencies. But Thevakrishnan says the actual number is much higher.

The Central Bank of Sri Lanka has no record of the total number of companies, organizations or associations that provide microloans in the country, nor is there a central record of the number of borrowers or the total amount borrowed in a year, says Ajani Liyanapatabendi, an assistant director at the bank, in a phone interview with Global Press.

In July, the Cabinet of Ministers approved a special relief program for microloan debts held by women in 12 drought-prone districts of Sri Lanka, including Vavuniya. The government pledged to pay off loans of up to 100,000 rupees ($548) taken out from companies registered with the Central Bank.

So far, Thevakrishnan says, local residents haven’t seen any benefits from that program.

“When you look at their lives, most of the women are at home, unemployed,” she says. “The purpose of the microloan is to give them a job opportunity.”

And women tend to repay loans on time to avoid the shame that comes from being in debt, she says, so microlenders prefer women as clients. The average loan is 50,000 rupees ($274), Godwin Phillip says. Most recipients live at or below the poverty line of 56,532 rupees ($310) per year.

“The financial companies make use of this position, and even though people do not have a total understanding [about the loan], the companies encourage them to obtain loans,” she says.

In Vavuniya district, one neighborhood of 254 households reported taking out 152 microloans, the equivalent of nearly six in 10 families, according to informal research by the Divisional Secretariat Vengalacheddikulam, an administrative area.

“At present, recovering the loan is the worst experience,” says Ambrose Tharmenthiran, branch manager at Commercial Leasing & Finance in Vavuniya, which stopped offering microloans in October.

Tharmenthiran says his finance company no longer gives out loans, but instead focuses only on recovering payments.

Vignarajah Suthamini, a 58-year-old widow, used a government subsidy of 550,000 rupees ($3,021) to build her home. The subsidy was part of a government program to assist people who lived in temporary housing after Sri Lanka’s civil war ended. But Suthamini found that the money wasn’t enough. Between July 2017 and May 2018, she took out three microloans, totaling 280,000 rupees ($1,533).

Now, she can’t make her monthly payments, which total 20,600 rupees (about $112) per month. She doesn’t have a regular source of income.

Dozens of other women in her village have taken out similar loans to complete their homes, Suthamini says. She quickly regretted taking out the loans, especially after she attended an educational meeting that Thevakrishnan organized in her village.

“It is better now to pay off these loans and live peacefully,” Suthamini says.